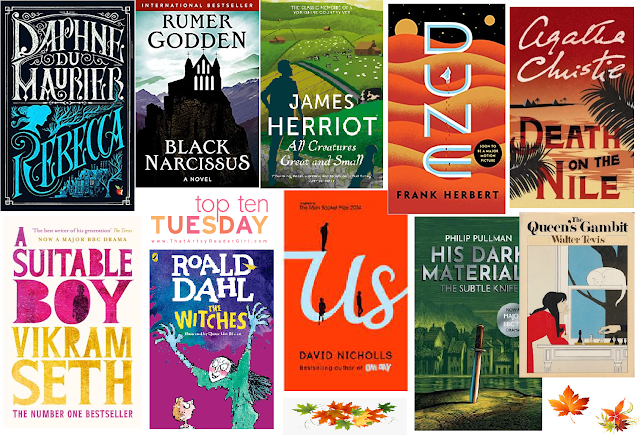 This week's Top Ten Tuesday is Autumn reads, and as there are lots of promising adaptations coming up, I'm adding a few of these to my Autumn TBR.
Rebecca by Daphne Du Maurier

I'm feeling very dubious about this adaptation, because Lily James looks much too glam and confident in the trailer - and since seeing the old nineties series I can't picture anyone but Charles Dance as Maxim - but I'm still going to watch it.
Black Narcissus by Rumer Godden

I remember the seeing the Hollywood film of this (with Deborah Kerr) as a kid, and it was so creepy! The book was written I the fifties, but I've heard it's a good quick read.
All Creatures Great and Small by James Herriot
The last episode is on tonight! It's probably still on channel 5's iplayer, and I bet it'll be on Masterpiece soon. It's just nice cosy watching - I've heard really good things about the books too.
The Witches by Roald Dahl

Apparently Roald Dahl really liked the old film - until they changed the ending. This new version is supposed to be more faithful, and as it's still set in America (and the horrible posh kid is English, switching it around from the book - cheeky) I'm assuming we'll get the book ending in this one!
Us by David Nicholls

Doesn't really look like my type of thing, this, but it's BBC and based on a David Nicholls book, so could be good.
Dune by Frank Herbert

So, this remake of the sci-fi classic isn't actually out until December, but the book's pretty big so if you want to read it before the film comes out you might want to have it in your sights.
A Suitable Boy by Vikram Seth

This finished showing on the BBC a few weeks ago, but if you missed it, I think it's coming to Netflix? I really enjoyed it, and I'll get to the book eventually...
Death on the Nile by Agatha Christie

Kenneth Brannagh's follow up to Murder on the Orient Express, this Agatha Christie adaptation should be on the big screen in October - if the cinema's haven't all locked down by then.
His Dark Materials: The Subtle Knife by Phillip Pullman

After a lot of fanfare, I thought the first series was a bit of a let-down - but maybe the books were just a slower than I remembered? Having never seen the second book on screen though, I'm quite looking forward to it.
The Queen's Gambit by Walter Tevis

Based on a book by Walter Tevis, this is an upcoming Netflix series about a chess prodigy starring Anya Taylor-Joy. Looks good?
What adaptations are you looking forward to?
Labels: Adaptations film Lists Top Ten Tuesday. TTT tv