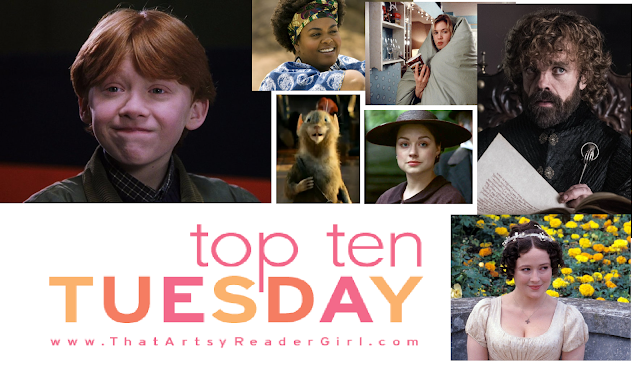 Yes, I know it's Wednesday. But I forgot to put this up yesterday and I really enjoyed this topic! (Top Ten Tuesday featured at That artsy reader girl).

“Well, we were always going to fail that one,” said Ron gloomily as they ascended the marble staircase. He had just made Harry feel rather better by telling him how he told the examiner in detail about the ugly man with a wart on his nose in his crystal ball, only to look up and realize he had been describing his examiner’s reflection.
—J.K. Rowling (Harry Potter and the Order of the Phoenix)

Ron Weasley does not get the love or the recognition he deserves among Harry Potter fans. As Luna says, he can be unkind sometimes, he can be very kind too. He's real and he's flawed, but he's truly loyal, brave and good. I'd argue even more so than Harry and Hermione, because he doesn't have Hermione's genius, and unlike Harry he has a choice. He's not been singled out in any way, he has a secure loving family, and he's a pure blood. Yet he almost never makes the easy choice, always the right one.  He chooses to fight, to follow Harry through every (sometimes dodgy) decision he makes, although he never gets the glory. He does it because he's a good friend, and a good person. He always lightens the mood and he makes you laugh. As Harry says during the first of their two memorable fights "there was a lot less laughter, and a lot more hanging around in the library when Hermione was your best friend." I love Hermione, and I'm definitely more like her in the friend department than I am Ron. And yes, Ron would be moody and jealous and petty sometimes. But he's the person Harry would miss most, and the books wouldn't be half as good without him.


"Grandmere! What do you think you're doing, casting me in your musical?...I don't have any acting talent whatsoever!
Tina, in line beside me, kept nudging me going, 'But your version of "Barbie Girl" is so good!"

I loved The Princess Diaries as a teen, and I still like them now, although looking back I want to shake Mia sometimes. I love the early years when Lilly is her best friend - and she is loads of fun. But she would be exhausting. Tina is kind and supportive and will gush with Mia about trashy romance novels and TV. She's never judgemental but always there with gentle and usually wise advice (which obviously, Mia ignores.) As the books went on I missed Lilly and Mia's closeness - but I could well understand why a person would gravitate towards Tina.

Bridget Jones and her gang

"All got really plastered after that. Was completely fantastic evening. As Tom said, if Miss Havisham had had some jolly flatmates to take the piss out of her she would never have stayed so long in her wedding dress."
— Helen Fielding (Bridget Jones: The Edge of Reason)

Bridget Jones is a girl after my own heart. My favourite bits of the books (first two obviously, wouldn't bother with the others) are always when Bridget, Jude, Shazzer and Tom are together, getting drunk and ranting about men and fuckwittage. She goes on about dying alone eaten by Alsatians, but her friends would never let that happen. Being a single girl isn't too bad when you've got your friend family.

Any of the Casson Family

My love for Hilary McKay's Casson family has grown since reading them as an adult. And I'd take any of them for a best friend. They're all kind, and loyal and charismatic. Saffy and Sarah (honourary family member) would always fight your corner (like when they attacked Indigo's bullies in the boys cloakrooms) and encourage you to be your best, smartest self. Caddy would listen sensitively to your worries and get you helping with her animals. Indigo would be perceptive and a soothing presence, and always stand up for you. Rose is fun and tough and she loves fiercely. I'd like to sit in the kitchen with Eve (and maybe even in the shed) and even Bill, who'd be a night mare husband, would be a charming and reliable friend, I think!

“My friendship you shall have, learned Man," piped Reepicheep. "And any Dwarf--or Giant---in the army who does not give you good language shall have my sword to reckon with.”
― C.S. Lewis (Prince Caspian)

Reepicheep is one of my favourite things about the Narnia books, and I especially love his relationship with Eustace in The Voyage of the Dawn Treader, during the dragon episode. He looks cute and cuddly but he's a hero. He's got more courage than is good for him, and is kind and fierce. He'd get you into trouble by rushing into situations, and you'd probably get beaten up a lot as Reepicheep's best friend. But he would always stand up for what's right, and he's surprisingly patient and perceptive when he needs to be.

“Follies and nonsense, whims and inconsistencies do divert me, I own, and I laugh at them whenever I can.”

The downside of being best friends with Lizzie Bennet, is you would never get any male attention while she was around. But the upsides would make up for that. She's emotionally intelligent, and puts a lot into her friendships. Even when she sort of falls out with Charlotte, and can't understand her decision to marry Mr. Collins, she still goes to visit her and works at keeping the friendship because she knows Charlotte needs her. She's fiercely loyal to Jane, who is her sister as well as her best friend, and she's good fun. She doesn't take life too seriously, but she's got strong opinions and she stands up for herself and others.

"Never forget what you are, as the rest of the world will not. Wear it like armour and it can never be used to hurt you."

Tyrion's not perfect (if he was living in the real world not Westeros he'd be a problematic choice of best friend...) but I love him. He'd always make you laugh, he's smart and he's kind. You could encourage him when he's doing good, and I don't think he'd take offence if you told him straight  when he was out of order.

“She freshens me up above a bit. Who'd ha thought that face - as bright and as strong as the angel I dream of - could have known the sorrow she speaks on? ”
― Elizabeth Gaskell, North and South

When I first watched North and South, I wasn't Margaret's biggest fan, but since reading the book (and growing up a bit) I've grown to really love her. I like how she doesn't differentiate between her friends from different walks of life, how she fiercely defends her principles and sticks up for others, yet listens to others people's point of view too. She's a great friend to Bessy and Higgins, and she looks after her mum and dad. She would get on my nerves, don't get me wrong. But she'd always have your back.

"When there is nothing you can do to stop the march of adverse events, then the best thing, she felt, was to get on with life and not to worry."


I've only read the first book in the Number One Ladies Detective Agency series, but I think Precious is great (and the BBC/HBO series is really worth watching if you can get hold of it anywhere.) Smart and ambitious, but also laid back and understanding, Mma Ramotswe would be the perfect sounding board for your problems, always giving wise, common- sense advice alongside a pot of bush tea. And she'd be good fun on a night out too.

"Matilda said, "Never do anything by halves if you want to get away with it. Be outrageous. Go the whole hog. Make sure everything you do is so completely crazy it's unbelievable..."
— Roald Dahl (Matilda)


Matilda would be the perfect best friend I think, as she's smart and bookish (so you could be geeky together) but she's also up for a bit of adventure. She's nice and brave and interested in things. Perfect friend material.

Who would be your book besties?