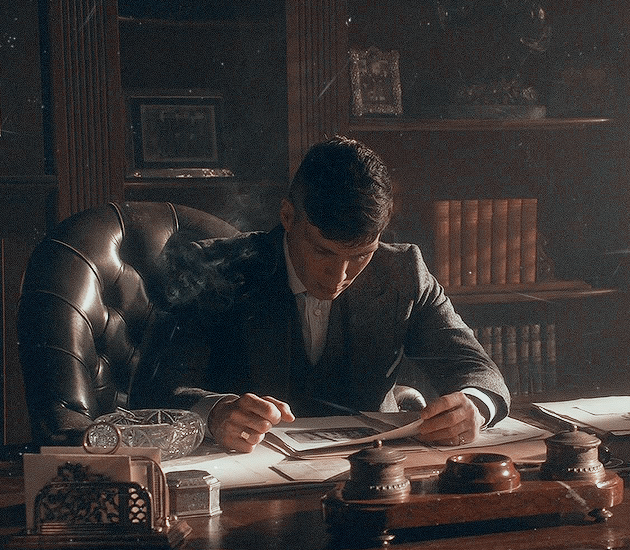 I've been re-watching Peaky Blinders in anticipation for the final series (when will we get a release date? When??) and I'm in that obsessive stage where I'm thinking about it a lot. Set between the two world wars and following a gangster family in Birmingham (England) it's violent and manly, sometimes a bit slow and makes smoking look cooler than any series in these more enlightened times has a right to. But the characters are so interesting and the writing, the direction, the music, the look - it's just so good. Anyway, I made a book tag. It's an original, but the images are not my own. Feel free to give it a try if it interests you.
(Includes some mild Peaky Blinders spoilers, if you've not seen it!)

Tommy Shelby is head of the Peaky Blinders, intelligent, ruthless and kind of a terrible person since the war and his ambition messed him up. He's the hero, but not such a good guy (those eyes tho...) When it comes to favourite antiheroes from books it's got to be Kaz Brekker, from Six of Crows. He's the hero really but he does some messed up things, while remaining a character we invest in. The crows are all great, but Kaz is the clear leader, and my favourite.

Arthur
(Pick your favourite first novel in a series)

Although Tommy is the boss, Arthur is the oldest Shelby brother. So for this one, I want a favourite first novel in a series of books. Mine's got to be Harry Potter and the Philosopher's Stone. I notice a few people write off the early books as simplistic nowadays, but I think they're perfect.

Polly
(Pick a matriarchal figure from a novel)

Polly Gray, played by the late great Helen McRory is one of Peaky Blinders' fiercest female characters and the matriach of the Shelby family. My favourite matriarchal book character is Grandma Fontaine from Gone with the Wind. There's one bit where she tells Scarlett how she saw her family get scalped by Pawnees as a child and so she understands how once you've had the worst happen to you you've got no fear, but you've still got to be careful because that recklessness can ruin what's left of your life. She's like seventy odd but she's just the coolest character.

John
(Pick an overlooked sibling from a book/series)

John is the Shelby that you kind of forget about. He's not a tortured soul like Arthur or ambitious like Michael. My favourite overlooked book sibling is Susan, from the Chronicles of Narnia. Edmund's my favourite, but I think we all know that Susan got a raw deal.

Ada
(Pick a character you wanted to see more of)

I love Ada as a character, she's been my favourite member of the Shelby family all the way through, but she stays out of the drama a little too much - aka she never really gets any story-lines of her own. A book character I'd like to have seen more of is Madge from The Hunger Games. She was set up as a major character and then just sort of forgotten about.

Michael is such a big player in the Shelby family nowadays, that we forget he came late to the party. I'm going Harry Potter again for this one, with Luna Lovegood. It's insane that she didn't make an appearance until book five. Do you notice that there are a lot of babies called Luna about nowadays? There's your proof that the 'Harry Potter generation' have started pro-creating.

Finn is the brother that Tommy "never got around to." Bless him. A later book in a series that I love, is probably the fifth Mediator book by Meg Cabot. I can't even remember what it's called and I know they have different titles in the US and the UK. But I know it's the one with loads of Paul Slater scenes and I love Paul. I know he's evil, but he's loads of fun, especially in his interactions with Jesse.

Grace
(Pick a book about spies or double agents)

I've not read any spy books that I can think of - but in Bernard Cromwell's first Sharpe book (chronologically) Sharpe's Tiger, he ends up acting as a spy with the French in India. In the one battle Wellington loses, Sharpe's fighting on the other side. Naturally.

Alfie Solomons
(Pick your favourite rival-turned-friend from a book)

Is Alfie a friend? Who knows what's going on with him. But I like him anyway. I feel like the enemies to friends thing is a bigger trope in films than in books? I think my favourite is Eustace and Reepicheep in Voyage of the Dawn Treader.

Lizzie
(Pick a character with an unexpected journey)

When Lizzie first appeared in Peaky Blinders, who knew she'd still be around five series' later? A book character with an unexpected story arc - although not one that I particularly approved of - is Jacob from Twililght. In the first book he  wasn't even intended as a proper love interest for Bella, never mind the whole imprinting thing. But the fans liked him so much that Stephanie Meyer made his role bigger when she came to write New Moon. Apparently?

(Spoilers for The Hunger Games) here! Anyone else actually really like May Carlton? Grace was alright, but May's just more my kind of girl. So is Lizzie to be honest. And basically all of Tommy's other love interests other than Grace. Anyway, my favourite love triangle loser in a book series, is probably Gale from The Huger Games. I get that Peeta was right for Katniss, but I would've had Gale for myself.

Everyone hates Linda for some reason, but I've always quite liked her? I've probably got a lot of unpopular bookish opinions. I always quite liked Rosalie from Twilight, but I could never stand Alice.
Do you watch Peaky Blinders? Who's your favourite?