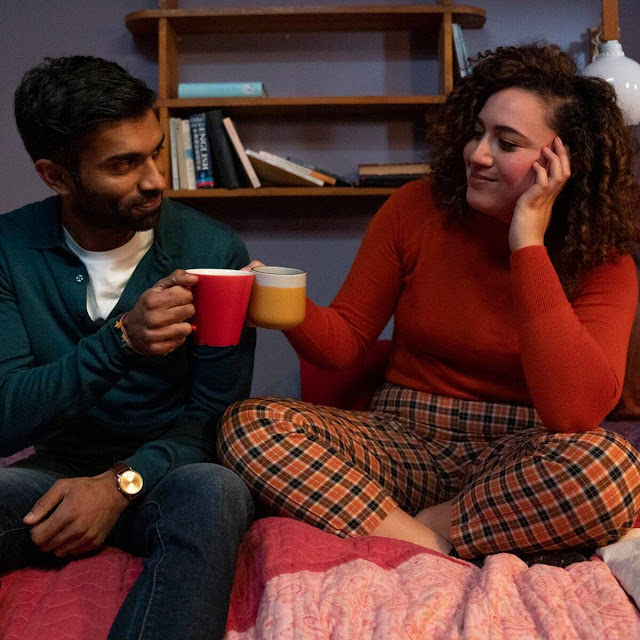 This week's Top Ten Tuesday - hosted at That Artsy Reader Girl is "books with numbers in the title." Well, going with the numbers theme, my list today is mini-series with less than ten episodes, to binge on a rainy day. Sometimes you want an afternoon's telly, but you don't want to have to commit to lengthy unfinished series with twenty two episodes per season. Am I right? Here are a few just long enough to get lost in, but that you can leave behind once the sun comes out.

You can't go wrong with a bit of Sunday afternoon Jane Austen, and this is my favourite Emma. It's just really cosy and Johnny Lee Miller is a very sweet Knightly.

Another new-ish one that hopefully will get renewed, the premise of this is a bit like a gender-swapped Notting Hill. The main girl meets a movie star on a night out and they have a one night stand, but then she realises who he is... It's just a really funny, relatable little rom-com, written and starring Rose Matafeo, who is definitely one to watch.

From the same screen writer (Sandy Welch) this is my favourite Jane Eyre (see also, North and South! That's four episodes too.) It's perfect for Autumn, 'Gothic' but also warm, if that makes sense? The chemistry between Jane and Rochester is on point. If you're more of an Emily fan would recommend the Tom Hardy Wuthering Heights! (2 episodes).

This is a new discovery and I hope it gets a second series. It's about a Muslim punk band and has a bit of everything, female friendship, romance, band drama, cultural issues. The first episode is a bit of an assault on the senses, but once I was in I really loved it. The acting is brill and it's just really girly and cringe-y and fun. "Bashir with the good beard" is a tune.

A list like this list wouldn't be complete without this classic. This has been a lazy afternoon staple for me since I was a kid, but it still makes me laugh every time.

I watched this ages ago but I remember it was good. It's a period drama thriller, based on a Margaret Atwood book, about a maid who's accused of murder. But did she do it? It was really unsettling but I enjoyed it a lot.

Bit different from Austen and the Brontes, but if you want a good cry this Russell T Davies drama about the AIDS epidemic will do the trick. Very well written with warm characters and lots of laughs as well as tears. It's not for the faint-hearted but worth a watch if you think you can cope.

This Julian Fellowes drama got a lot of stick for basically not being Downton, but it's its own thing, it's a complete story and I enjoyed it. Just an easy watching period drama with some good twists and turns.

All Creatures Great and Small (6 + a Christmas special!)

This was lovely. I've never watched the original but I think the old fans and book fans were both happy with it. It's just about a vet in Yorkshire in the thirties, very gentle and funny with nice characters.

Another lock-down watch, you wouldn't think you could make chess interesting on the screen, but turns out you can. Great acting, sixties fashion and I got really invested in the chess scenes. Bit dark though - drugs, child neglect, suicide etc.

So it's twelve episodes but it's complete. This lived up to the hype I thought, especially series two. It's sad and darkly funny and Phoebe Waller Bridge is brilliant. Won't be everyone's cup of tea but I love all the characters and the relationships, especially between Fleabag and her sister Claire.

If you haven't binged this yet, what exactly did you do in Lock-down? It's kind of depressing, but very good, well-acted etc. The half hour episodes are a trap, you've watched them all before you realise.

This is my favourite comedy at the moment. It's about a young couple who get left a big old house full of ghosts, she can see them, he can't. And it's the Horrible Histories cast. It's easy watching, it doesn't try too hard, I love all the characters and it makes me laugh every episode. They've done a US remake already, but I don't think it'll be the same without the original cast.

Seen any of these? What mini-series would you recommend?