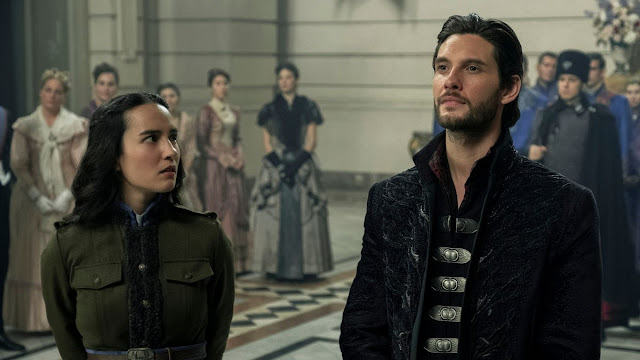 This weekend I binged Netflix's adaptation of Shadow and Bone with my sisters. We've all been reading or re-reading Leigh Bardugo's books and getting caught up, and I was properly excited for the adaptation. The world looked brilliant, so did the cast and I was ready to do some fan-girling over Ben Barnes (where's he been anyway?) and find out how they were possibly going to combine the first Grisha trilogy with the Six of Crows books. So, did it all live up to expectations? Yes and no. There were definitely a few let downs, but overall there was more good than bad. And it all does look incredible - exactly how I imagined. 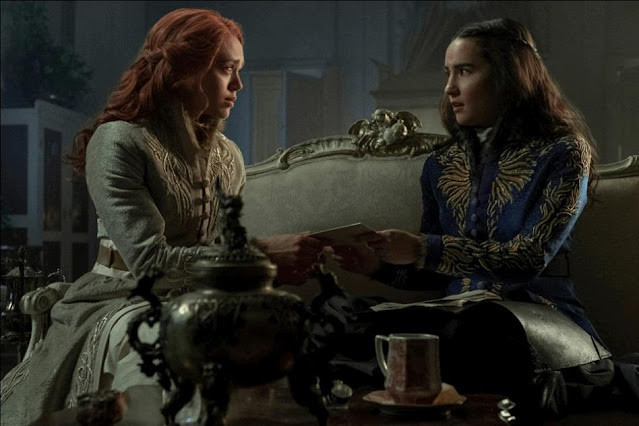 Shadow and Bone is an adaptation primarily based on Leigh Bardugo's first novel. It follows Alina Starkov, a Ravkan orphan and army conscript who is discovered to be a Sun Summoner - a rare type of Grisha - and is taken to live at the Little Palace and train.  Separated from her childhood friend Mal, who she's been in love with forever, she is spirited away by "General Kirrigan" (AKA The Darkling) so she can serve the second army and one day maybe save the world. If you've not read the books, you're going to have to get used to all this terminology. It's explained in the series - and to be fair, the exposition isn't that clunky - but I imagine newbies might be confused. Ravka is a Tsarist Russia-inspired country where the "first army" is made up of ordinary soldiers. The "second army" consists of Grisha, who use "the small science", essentially, magic. In the other countries of Leigh Bardugo's world Grisha are hunted and shunned, in Ravka they are celebrated and their army is led by a Shadow Summoner - in the show they call him General Kirrigan. Book fans will know him as The Darkling. I think the writers thought it would be a bit cheesy for everyone to be addressing him that way? "General" does sound more natural, to be fair.

So where does Six of Crows come in? Well, the books are set after the Grisha trilogy, telling the story of a gang of love-able thugs from the neighbouring Kerch, who orchestrate a heist on the Ice Court of Scandinavian-inspired Fjerda. However, parts of the story are told in flashback, so the show writers utilise some of that here (Nina and Matthias) and the idea of the heist is borrowed for a curtailed gang of three of the Crows (Kaz, Inej, Jesper) to attempt to break Alina out of the Little Palace, with the incentive of one million kruger (Kerch cash.) So does the merging work? Kind of. The crows provide a needed dose of action and the inclusion of Nina and Matthias's story-line helps demonstrate to the audience the hardships for Grisha outside of Ravka. But Six of Crows fans - the bigger fan-base, as far as I can make out - will probably wish that their faves got their own story off the bat. The story they get in this is kind of weak, but I can see the potential in all the cast, if they get to do their thing more in a second season. Kaz, particularly, got a bit of a rough deal here. 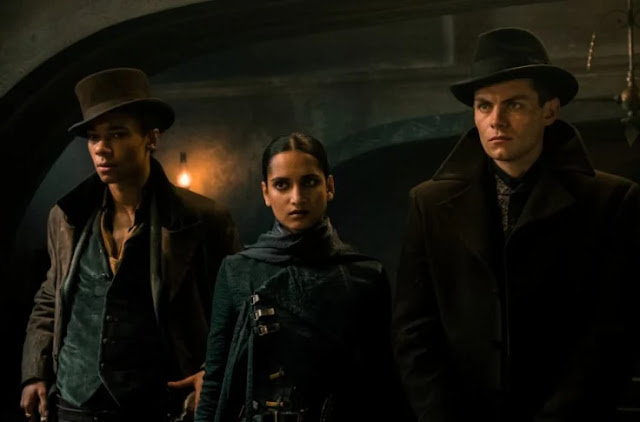 (Gets kind of spoiler-y from here on!)

When it came to the actual Shadow and Bone stuff, I thought the series didn't often put a foot wrong. The script, I thought, was pretty awkward throughout. But in terms of how they adapted the source material, they did quite well. Shadow and Bone was Bardugo's first novel and it faced its share of criticism - Alina needs more agency, it's a bit trope-y, etc. etc. I thought the script minimised these issues as well as it could without changing the characters or story too much (although I didn't like that thing with her burning the maps. No need.) Book fans also have beef with Mal for some reason (I like him, fight me) but here the writers basically took away anything that anyone could object to. He doesn't appreciate Alina until she leaves! Oh, look, now he does! He fancies other girls! Oh, look, now he doesn't! He gets jealous and cranky when he sees her with the Darkling for the first time! Oh, no, looks like they missed that scene out - guess we can imagine he was totally fine with it right away. He's a bit freaked out by her powers at first! Oh, nope, he's cool with that too. Alright then. Basically they've made him a saint, but, you know, if that's what it takes to stop people saying he's worse for her than the Darkling, I guess that's what they had to do. 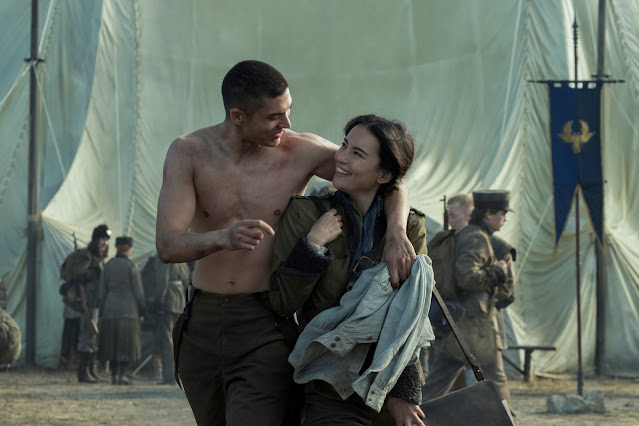 I liked that they made Alina half Shu (Shu Han: A Chinese inspired country somewhere on the map) and it makes sense, as Mal and Alina were borderlands people. But I did wonder whether all the racism aimed at her would be off-putting for some Asian viewers? Fantasy is supposed to be escapist after all. But then the genre is also able to tap into real world problems from a safe remove. I thought there were moments where the racism was powerfully conveyed and it worked, but others that I didn't like. Zoya called Alina a half-breed at one point. I know we're not supposed to like Zoya at first, but she becomes part of the gang later on, so I'd rather she wasn't a racist.

Overall, they got the story across well. I thought Genya's whole thing with the king could have been explained better, and although I really liked the inclusion of that extra Darkling backstory, I think it may have been drawn from the prequel novel, so I wish I'd read that before going in! There was a whole rivalry thing between West and East Ravka too, that I don't remember being in the books. I wondered whether that was something they introduce in King of Scars? 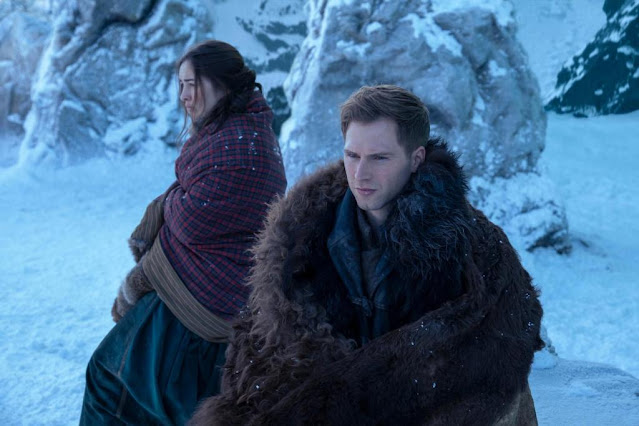 So, quickly on Six of Crows. I was a little bit disappointed, not going to lie. The chemistry between Kaz and Inej was definitely there, Jesper was fun, Inej was perfect. Kaz... I hate to say it. I don't think he had enough presence. He looked just as I imagine him. And I'm going to give Freddy Carter the benefit of the doubt, because they really didn't give him enough to do - The Conductor (added character who I'm still undecided on) took over a lot of the planning and leadership, leaving Kaz with very little room to show us his skills. Carter definitely brought his 'scheming face' game and there were flashes where I could see how brilliant he would be with better material. But that voice though. I thought Alina was much too posh aswell (they really could have got her to tone it down, she genuinely wouldn't be out of place on Made in Chelsea and Mal didn't sound like that, so what gives?) but Kaz is supposed to be a gutter rat. The bastard of the barrel! Why does he sound like he went to Eton?? I'm sure he was capable of giving us some kind of gravelly, cockney Bill Sykes thing. That would be my director's note.

Anyway, after all that nit-picking, I thought it was generally brilliant. It looked so, so good. The cast were fantastic and Ben Barnes did not disappoint. He was made to play this role, seriously. And I actually really loved Matthias and Nina! They haven't really been in the trailers much, so I didn't know what to expect. But their scenes became some of my favourites. The pacing was a little slow at the beginning but the whole thing hit its stride a couple of episodes in (a bit like The Witcher) and I think if we get another season it will only get better and better. All the ingredients are there. So people, get watching, because we need series 2!! I need to see Nickolai and Wylan!!!

Have you read the Grishaverse? What did you think of the series?

Also, here're some quizzes: Which Shadow and Bone guy is your match? (books), Which 'Six of Crows' character are you?, Which Grishaverse girl are you?