This week's Top Ten Tuesday (hosted at That Artsy Reader Girl) is books that make you smile - I've tried to sum this up with a few quotes. We probably could all do with a bit of cheering up lately, and I had fun finding these. Warm characters that you care about, nice moments and jokes at inappropriate moments - all good for the soul I think.

"Why," demanded Ron, "Have you outlined all Lockhart's lessons in little hearts?!"

- Harry Potter and the Chamber of Secrets

The Chamber of Secrets is the funniest of the Harry Potter books I think. Every re-read I'm always surprised by how much it makes me laugh.

"I take no leave of you Miss Bennet. I send no compliments to your mother, you deserve no such attention."

-Pride and Prejudice by Jane Austen

There are two types of Jane Austen fans - those who think she's funny, and those who don't. I really don't get the second type.

"Rose had the sort of eyes that manage perfectly well with things close by, but entirely blur out things far away. Because of this even the brightest stars had only appeared as silvery smudges in the darkness. In all her life, Rose had never properly seen a star.


Tonight there was a sky full.
Rose looked up, and it was like walking into a dark room and someone switching on the universe."

The Casson books make me laugh out loud but they're also full of beautiful warm moments. I like this one a lot - where Rose first looks at the night sky with her glasses on. My Dad says he thought stars were imaginary before he got his first pair. 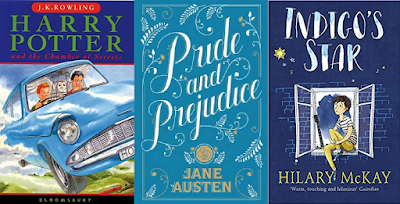 "Sir," she said "You are no gentleman."
"An apt observation," he answered, airily. "And you miss, are no lady."

- Gone with the Wind  by Margaret Mitchell

"It struck me as pretty ridiculous to be called Mr. Darcy and to stand on your own looking snooty at a party. It's like being called Heathcliff and insisting on spending the entire evening in the garden, shouting "Cathy" and banging your head against a tree."

"I've got two neptunes here," said Harry after a while, frowning down at his piece of parchment, "that can't be right, can it?""Aaaaah," said Ron, imitating Professor Trelawney's mystical whisper, "when two neptunes appear in the sky, it is a sure sign that a midget in glasses is being born, Harry..."

- Harry Potter and the Goblet of Fire

- The Phantom of the Opera by Gaston Leroux 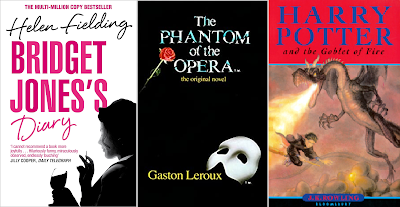 "Marcus followed him into the kitchen. It wasn't like their kitchen at home - it was smaller and whiter, and had loads of gadgets, most of which looked like they'd never been used. [...]
"What's this?"
"Ice cream maker. What do you want?"
"I'll have some ice cream, if you're making it."
"I'm not. It takes hours."

- About a Boy by Nick Hornby

About a Boy makes me smile all the way through - is it partly nostalgia for the film? Maybe. But I love Will and Marcus, and I love the tone of the writing.

"If I don't keep this job, then my only future career-options are working in Argos, or being a prostitute,' I say, wildly.

'Maybe you could work in Argos as a prostitute,' my mother says, merrily. She appears to be enjoying this conversation. 'They could list you in the catalogue, and people could queue up, and wait for you to come down the conveyor belt."


- How to Build a Girl by Caitlin Moran

Caitlin Moran's duology How to Build a Girl and How to be Famous aren't always light and fun -  but they're also properly funny and warm and life-affirming. The essay about how musicians should learn to respect their teenage girl fans is everything. 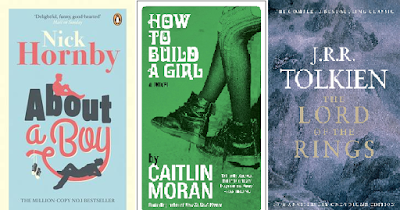 "It's like in the great stories, Mr. Frodo. The ones that really mattered. Full of darkness and danger they were. And sometimes you didn't want to know the end… because how could the end be happy? How could the world go back to the way it was when so much bad had happened? But in the end, it’s only a passing thing… this shadow. Even darkness must pass."

- The Lord of the Rings : The Two Towers by J.R.R Tolkien