TTT: Character traits - Don't you love it when they're kind?

This week's Top Ten Tuesday (hosted at That Artsy Reader Girl) is favourite character traits. I decided to stick to one, and try and think of a few of my favourite warm-your-heart, genuinely kind moments in books. You know, when a character does something that makes you go 'aw, isn't that lovely!' with no agenda, they just choose to be kind. Bit sappy? Yeah, well I am sometimes. (Also, I tried not to make this list too Harry Potter heavy, but a couple have inevitably slipped in.)


Harry Potter and the Prisoner of Azkaban by J.K Rowling
(Hagrid tells Ron and Harry to be kind to Hermione) 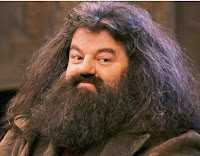 "She's in a righ' state, tha's what. She's bin comin' down ter visit me a lot since Chris'mas. Bin feelin' lonely. First yer weren't talkin' to her because o' the Firebolt, then you weren't talkin' to her because her cat-"
"Ate Scabbers!" Ron interjected, angrily.
"Because her cat acted like all cats do [...] I gotta tell ya, I thought you two'd value your friend more than broomsticks or rats. Tha's all."

There are so many kind characters in Harry Potter. (Hermione and Lupin stand out to me especially) but I think my favourite is Hagrid. Prisoner of Azkaban is one of my favourites, but it can also be a hard read because Harry and Ron are falling out with Hermione all the time. Which is a realistic depiction of teenage friendship but all the more painful for that. One of my favourite bits is when Hagrid invites the boys to tea especially to tell them that Hermione's having a tough time and they need to sort themselves out. It's a such a recognisable situation and I always feel a squirmy sense of guilt on Harry and Ron's behalf (they don't listen though.) As the books go on and the kids grow up, it's easy to think of Hagrid as a bit of a joke. But he's sensitive and he notices when people need a bit of TLC. One of my favourite moments is a sort of callback to Harry and Hagrid's early relationship, when Harry's a bit choked up about Hedwig's death, but trying not to show it because Mad-Eye's just died. Hagrid notices and acknowledges Hedwig - it's just a line but it shows a lot.

Mr. Knightly is one of Jane Austen's kindest men, and there are a few instances, of him generally being a gem, that I could mention. But I think my favourite is when he asks Harriet Smith to dance after she's been snubbed by Mr. Elton. He's not a dancer but he "comes to her rescue" to stop her feeling embarrassed and left out. (I love that scene in Clueless too - with Josh 'doing her a prop!')

"There's no need to tell me I'm not brave enough to be in Gryffindor. Malfoy's already done that," Neville choked.
Harry felt in the pocket of his robes and pulled out a chocolate frog, the very last one from the box Hermione had given him for Christmas. He gave it to Neville, who looked as though he might cry. "You're worth twelve of Malfoy," Harry said.

I've already mentioned kind Harry Potter characters, but I sometimes forget what a little sweetheart  Harry himself is. Especially in the early books. He's flawed, like everyone, but he has the right instincts and he does a lot of very kind, as well as brave, things. I also love when he asks Luna to Slughorn's party. Although that's not so much kind as he does actually enjoy her company. I kind of ship them...

The Voyage of the Dawn Treader by C.S Lewis
(Reepicheep sits up with Eustace to keep him company)

"Reepicheep was his most constant comforter. The noble mouse would creep away from the merry circle at the camp fire and sit down by the dragon's head [...] There he would explain that what had happened to Eustace was a striking illustration of the turn of fortune's wheel, and [...] he could show him more than a hundred examples of emperors, kings, dukes, knights, poets, who had fallen from prosperity into the most distressing circumstances and and whom many had recovered and lived happily after afterwards. It did not, perhaps, seem very comforting at the time, but it was kindly meant, and Eustace never forgot it."

Dawn Treader is one of my favourite Narnia books, and I love Reepicheep and Eustace's friendship - which grows from enmity, like a lot of the best fictional friendships. Reepicheep is so kind, although Eustace has been nothing but a pain and a nuisance, and Eustace appreciates that and starts to change a bit in return. I feel like the mouse's kindness, as well as the dragon incident, is instrumental in changing him for the better.

This is a lovely book (although pretty dark in places) mostly about loneliness and people being nice to each other. The protagonist is damaged and snobbish and basically bonkers, but when she meets Raymond - an IT guy at work who befriends her and is kind to her despite her oddness - things start to change. The bit where he takes her round his mum's to tea (and she's really kind to her too) made me cry a lot. But my favourite part was probably the bit where she goes to buy a going-out top and the girls in the shop are all really nice to her and help her pick an outfit and do her make-up at the make-up counter. You could argue that's their job... but the inference is they're being kind and making a fuss of her.

The Lord of the Rings: The Two Towers by J.R.R Tolkien

"A new character has come on the scene (I am sure I did not invent him, I did not even want him, though I like him, but there he came walking into the woods of Ithilin): Faramir the brother of Boromir - and he is holding up the 'catastrophe' by a lot of stuff about the history of Gondor and Rohan [...] but if he goes on much more, a lot of him will have to be removed to the appendices.


I'd just finished the Two Towers book when I first saw the film, and my heart was still all full of Faramir, who twelve year old me had fallen a little bit in love with. But then he went and took the ring from Frodo! I was fuming (although now I do understand why that extra conflict was needed to flesh out the second film a bit) because the whole point of Faramir was he was such a good guy. He was gentle and honourable and he was stronger than Boromir in that way. But it's his manner with the hobbits that makes the impression. Basically he's kind to them - and that makes you respect him, although he makes some questionable choices later on.

Game of Thrones by George R.R Martin
(Ned gets Arya her "dancing master")

Despite the fact that most people in A Song of Ice and Fire are pretty terrible human beings, there are still plenty of kind little moments, and I suppose they stand out more because it's a cruel world. My favourite is when Ned Stark, after talking with Arya and discovering the sword she was given by Jon, sorts her out some "dancing lessons." It's kind because she should be doing something more ladylike, but he's listened to what his daughter really wants, and also allowed her to keep it as her secret. He's a nice dad, basically.

Attachments is the first Rainbow Rowell I've read, and I'm pretty sure I'll read more. A story about a man who falls for a girl at work through reading her emails to her friend Jennifer (for non work-related content - it's his job) it was a bit of an odd premise but I liked it because all the characters were essentially nice, kind people. I liked how Lincoln befriended Doris (and she him!) and I had a bit of a cry at the bit where Jennifer was having a meltdown in the car-park after a personal crisis and Lincoln didn't want to leave her on her own.

Indigo's Star by Hilary McKay
(When the bullies look after Rose)

I know I always go on about the Casson books on here, but they're so lovely and funny, and filled with little kind moments that make you cry. One bit that always affects me, is at the end of Indigo's Star, when Rose gets caught by Indigo's bullies and you think they're going to 'get her' for a moment, as ordered by the gang leader. But she's only a little girl and they're not monsters - she runs into the road hysterical and instead they try her best to keep her safe, pulling her back and keeping her stuff safe too. It doesn't sound that much, but it's such a beautifully written scene and it always gets me. 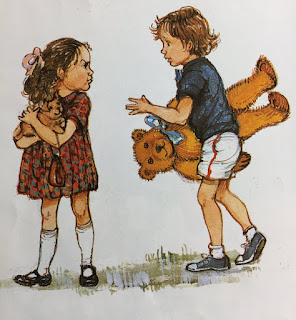 If you're looking for kind moments in books, this is the biggie though, isn't it? The classic Shirley Hughes picture book, where Dave's favourite toy is accidentally put on a bring and buy sale and bought by a little girl, and his big sister gives up the big teddy she's just won in a raffle to get it back for him. In most kids' books, siblings spend a lot of time fighting (which is true to life) but Dogger shows the other side (also true) that there's a lot of love and loyalty there too.

Do you have any favourite kind character moments?