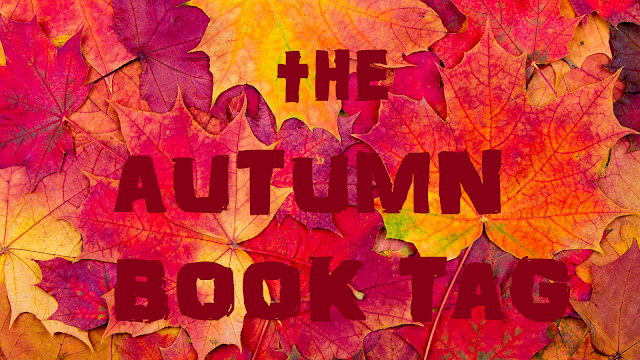 Jess at Jessticulates tagged me in the Fall Book Tag (which we always call Autumn in the UK so I couldn't bring myself not to change the title.) Thanks Jess! I've decided that Autumn is my favourite season (although I always say that at the start of Spring and Summer too, so you don't have to take me at my word) and I'm definitely embracing it at the moment. Just got back from a 'floating cinema' screening of Hocus Pocus, at the Albert Dock in Liverpool - complete with waffles and nutella, deckchairs and cosy blankets. It was still freezing, so we followed it up with hot drinks, tapas and chess afterwards in a bar on the dock. I love my Mondays off!!

I find myself always referencing the same books in these tags, so this time I've used only books I read this year. If you want to do the tag just make sure you link back to the creator (Tiffany), tag some people, oh, and you can use their graphics if you want :)

I picked this up as panic buy in a charity shop before a long train journey - but I was so glad I did. It's about a guy who falls in love with a girl at work through only reading her emails (to check for non-work -based conversations. It's his job!)  I loved the writing style and the email-y bits and the characters. I thought it was warm and nice and easy. The only thing I wasn't totally on board with was the ending - I reckon Rowell could've finished it better, but it was sweet anyway.

There was a lot of hype around the TV adaptation of this, this year, and the book has a huge cult following. I'd love to, but basically I've never really 'got' either Pratchett or Gaiman. After attempting a couple of each of their books in the past and DNF-ing them, I don't know why I thought the combo of the two would be more appealing. I finished this, and it made me laugh a few times, but it was all too weird and complicated for me. I didn't understand anything that was going on. So I'm giving up on them. Maybe I'm just dense - but it was just so weird.

I re-read this for the up-teenth time this year, and the friendships are one of my favourite parts. It's about a girl from Blackpool in the 1960's who moves to London to become a comedienne. I love the team on 'Barbara and Jim' - the titular Sophie, Bill and Tony (the writers), Dennis (the producer), and Clive (the lead actor.) It's really joyful and reads sort of like an ode to collaboration and working with fun, creative people. I can't get enough of them.

Fox Girl and the White Gazelle
by Victoria Williamson 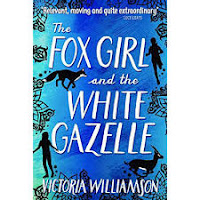 This is a beautifully written children's book set in modern day Scotland, which tells the story of Caylin - whose mum is struggling to look after her and who has become a bit of a bully in response, and Reema - a Syrian refugee who is missing her lost brother and struggling to adapt to her new life. It's such a warm, hopeful story and I loved the writing and the characters. It made me cry a fair bit too.

Korede from My Sister the Serial Killer
by Oyinkan Braithwaite

I loved this book (although it was crazy) and the relationship between the sisters reminded me a bit of 27 Dresses - although Malin Ackerman admittedly doesn't go round killing people in that. Korede is a great cook, but her glam (and murderous) kid sister tries to pass off her meals as her own, when trying to impress her new man (a Doctor at Korede's work, who she's secretly in love with.) My dad really enjoyed this too, but he couldn't understand why I was laughing so much when I read it. It was supposed to be funny, right?

Okay, so it didn't make me jump for joy - but it did make me laugh out loud on the bus, which was a bit embarrassing. I think it was the part where she's telling about her friend who goes to the gym 'to sketch' as an excuse to sit and watch the men working out. Except it gets awkward when they ask to see the sketches, and she's just drawn stick-men.

Right, I hate this tagging bit (anti-social...) so I'm just going to say, if you're reading this consider yourself tagged.

Have you read any of these? What's your favourite part about Autumn/Fall?