How to Build a Girl - some quotes 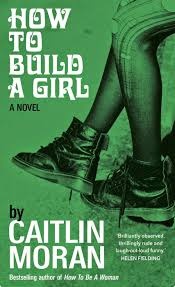 
“Anger is just fear, brought to the boil.”


“They [your parents] made you how they need you. They built you with all they know, and love—and so they can’t see what you’re not: all the gaps you feel leave you vulnerable. All the new possibilities only imagined by your generation, and nonexistent to theirs. They have done their best, with the technology they had to hand at the time—but now it’s up to you, small, brave future, to do your best with what you have.”

“I can write, because writing—unlike choreography, architecture, or conquering kingdoms—is a thing you can do when you’re lonely and poor, and have no infrastructure, i.e., a ballet troupe or some cannons.”

“When young people are cynical, and snarky, they shoot down their own future. When you keep saying "No," all that's left is what other people said "Yes" to before you were born. Really, "No" is no choice at all.”

“ -- the big difference between the rich and the poor is that the rich are blithe. They believe nothing can ever really be so bad, They are born with the lovely, velvety coating of blitheness -- like lanugo, on a baby -- and it is never rubbed off by a bill that can't be paid; a child that can't be educated; a home that must be left for a hostel, when the rent becomes too much.


'Their lives are the same for generations. There is no social upheaval that will really affect them. If you're comfortably middle-class, what's the worst a government policy could do? Ever? Tax you at 90 per cent and leave your bins, unemptied, on the pavement. But you and everyone you know will continue to drink wine -- but maybe cheaper -- go on holiday -- but somewhere nearer -- and pay off your mortgage -- although maybe later.
'Consider, now, then, the poor. What's the worst a government policy can do to them? It can cancel their operation, with no recourse to private care. It can run down their school -- with no escape route to a prep. It can have you out of your house and into a B&B by the end of the year. When the middle-classes get passionate about politics, they're arguing about their treats -- their tax breaks and their investments. When the poor get passionate about politics, they're fighting for their lives.
'Politics will always mean more to the poor. Always. That's why we strike and march, and despair when our young say they won't vote. That's why the poor are seen as more vital, and animalistic. No classical music for us -- no walking around National Trust properties, or buying reclaimed flooring. We don't have nostalgia. We don't do yesterday. We can't bear it. We don't want to be reminded of our past, because it was awful; dying in mines, and slums, without literacy, or the vote. Without dignity. It was all so desperate, then. That's why the present and the future is for the poor -- that's the place in time for us: surviving now, hoping for better, later. We live now -- for our instant, hot, fast treats, to prep us up: sugar, a cigarette, a new fast song on the radio.
'You must never, never forget, when you talk to someone poor, that it takes ten times the effort to get anywhere from a bad postcode, It's a miracle when someone from a bad postcode gets anywhere, son. A miracle they do anything at all.”

“If I don't keep this job, then my only future career-options are working in Argos, or being a prostitute,' I say, wildly.
'Maybe you could work in Argos as a prostitute,' my mother says, merrily. She appears to be enjoying this conversation. 'They could list you in the catalogue, and people could queue up, and wait for you to come down the conveyor belt.”


“No one ever laughs when I make these kinds of jokes. When Bill Murray says shit like this, people completely lose it. I wish I was Bill Murray. I hope everything I’ve read about evolution is wrong, and I eventually evolve into him.”

Have you read it? Or seen the film (which I've annoyingly missed, at the cinema) any good?