I picked up Love, Nina in work because I'd seen bits of the TV series on Netflix, and kind of mildly enjoyed it. The book was much better (despite what Goodreads would have you believe) but I still thought Nick Hornby (An Education, Fever Pitch, Brookyln) did a decent job of adapting Nina Stibbe's 'despatches from family life' into a watchable comedy drama. 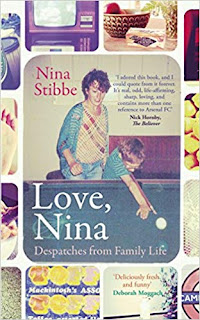 Love, Nina isn't a novel, but basically a collection of letters that the author wrote to her sister while working, aged twenty, as a nanny in London in the 1980's. Her boss is Mary-Kay Wilmers, editor of The London Review of Books and single mum to Will and Sam Frears (their Dad is Stephen, the Billy Elliot director). Also Alan Bennett, the playwright, comes round most nights for tea (or supper, as they call it.) Nina's letters are mainly general chat about the family and their day to day lives. There's also a fair bit about the friends Nina makes for herself, most notably Nunney, who cares for a man down the road and is the 'love interest', although it's never spelt out.

I liked Nina a lot. Her letters are funny and they capture the family and the little world really well (Alan Bennett says he was miss-remembered, but he's being a grump. He comes across as really nice and funny, so I don't know why he's complaining either.) I like how she writes out bits of dialogue as if from a play script, and how she seems to have just slotted into the family so naturally. Nina doesn't seem to do much work, but she's obviously very good with the kids and that's the important thing with a nanny I guess. Also she cooks a lot - my dad tried the curry recipe that Alan Bennett gives her and I feel like it's going to become a staple in our house too.

If you were looking for negatives, firstly there's not much plot. But that's because Love, Nina is not a novel. It's just someone's letters. From Goodreads I'd also gather that this is a book you either 'get', or you don't. You don't have to understand all the references or know who all the mildly famous people who feature are (I'd only heard of Alan Bennet) but if it's not your sense of humour you probably won't find much to interest. It made me laugh though - and once out loud, on the bus, which was a bit embarrassing. Having seen the TV series first, I also got a bit frustrated with how little Nina's relationship with Nunney was explained. Are they seeing each other from early on or are they just friends who become a couple much later? I don't need gory details but I'd like some clarification. Maybe Nina left those letters out, or maybe she just never talked to her sister about all that stuff - which would be totally believable. Annoying though.

Nick Hornby evident ally felt the same as me on the Nina/Nunney front, because the TV series has much more of a romantic comedy element. We follow the progression of the relationship from friends to something more, and although the show's still primarily about her life as a nanny, when she goes on a date it's actually called a date.

I liked the casting - mostly. The kids didn't annoy me too much, Nunney was strangely very fanciable (and I still don't understand because he is not my type at all) and I kept watching mostly for him, if I'm honest. Helena Bonham Carter was wonderful. She plays so many crazy characters that you forget how good an actress she is (if that makes sense?) Her MK (re-named Georgia) was understated and quietly funny and very close to how I pictured her in the book. Nina was the only one I was unsure about. I really like Faye Marsay (Pride, Black Mirror, Games of Thrones, The White Queen) as an actress, but I thought she wasn't quite warm enough for Nina. That could have partly been the script though, and she grew on me as it went on.

One main problem with the adaptation was the Alan Bennett character. The real Alan Bennet has obviously asked not to be depicted in it, but as he's in the book so much they've had to invent a new character who is basically AB minus most of the charm, and they've made him kind of uptight and un-likeable - at least in the beginning. I warmed to 'Malcolm' by the end, and Jason Watkins did a good job with the role, but I wonder whether the defamation of his character was kind of an unconscious revenge on Nick Hornby's part - for AB not agreeing to take part and therefore making Hornby's job so much harder. 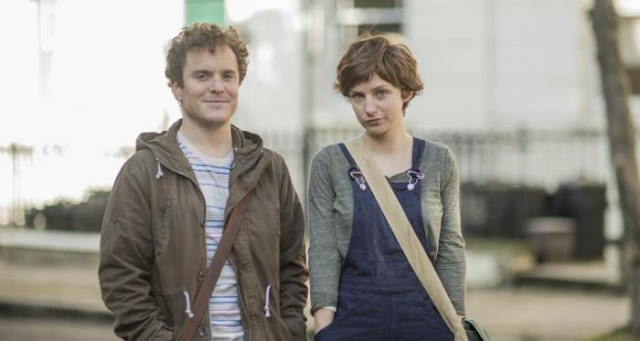 Honestly, I thought the TV series was a tiny bit dull. Although it's definitely watchable, I liked the characters and it made me laugh now and again. I'd compare it to when you're eating a big bag of sweets you don't really like that much and you're not really enjoying - but you still can't stop yourself finishing the whole bag. Is that a bit harsh? Probably. The decisions Nick Hornby made with the plot, the bits he picked out and elaborated on from the book all felt like good choices. It was just a bit slow and lacking in... something. I'd watch it if it was on, but I don't think I'd choose to binge it again. The book on the other hand, I think I'd go back to. It was good fun.

Have you watched or read Love, Nina? Which did you like best?