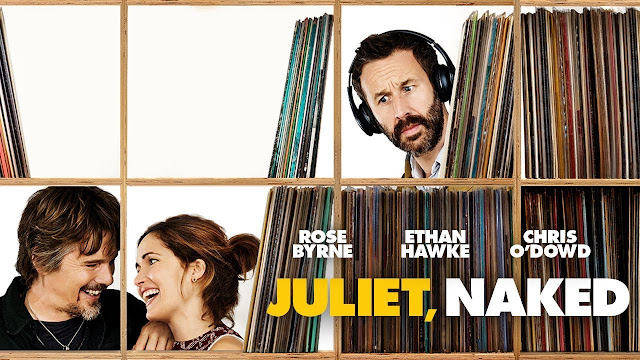 I've read a fair bit of Nick Hornby now, so when I heard that Juliet, Naked had been made into a film I thought I better read the book. Sod's law though, decided that I needn't have rushed, as apparently none of my local cinemas seem to think there's an appetite for rom-coms. Good ones only come around once in a blue moon nowadays so WHY NOT SHOW THEM?? There's only so much Marvel I can take. But rant over. I did eventually get to watch the film, and it was a really good adaptation and a nice easy watch.

Juliet, Naked is the story of Annie, who lives with her boyfriend, Duncan in an English seaside town. They decided years ago not to have kids, but now she's starting to want more from life. Not least because Duncan is obsessed with enigmatic musician, Tucker Crowe - a man who disappeared from the public eye years ago - and the fan sites and theories take up a lot of Duncan's spare time. When Tucker releases 'Juliet, Naked' - a new album, seemingly out of nowhere - the fan-sites go mad and Annie has had enough. She writes a scathing review online, which leads to something more than she ever expected... 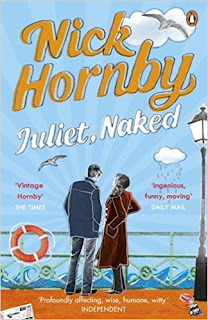 It sounds weird, but the premise is quite cute. I'm used to Nick Hornby's style and themes by now (funny, relate-able, usually involving characters that are obsessed with something, almost always a bit drag-y towards the end) and this was more of the same. I liked the characters and Annie, as the female protagonist was well done. Would recommend as a good read, but it's not in the same league as About a Boy (and Funny Girl is still my favourite.)

The film stars Rose Byrne (always great) as Annie, Chris O' Dowd (ditto) as Duncan and Ethan Hawke, (I couldn't remember whether I'd ever actually watched him in anything before, despite his fame) as Tucker. Hawke was the surprise for me, he played his part really well, with a lot of warmth and humour. And star quality, actually.


They changed a couple of things from the book (the story-line involving Grace is the only significant departure) but overall it was a faithful adaptation and it captured the feel of the novel really well. I thought the film rounded the ending off more neatly than the book, and the charm of the cast gave a lift to the sometimes slow moving plot. I'd definitely recommend the film as a nice afternoon watch - genuinely funny, a bit predictable but not un-original, with a strong cast. Chris O' Dowd even made me cry in one scene. If you're looking for something light and funny and you like Brit flicks, go and add this to your watch list. Rose Byrne's accent aside (I can't decide whether it's good or not?) you can't really go wrong.