My Top Ten Game of Thrones costumes (so far!) 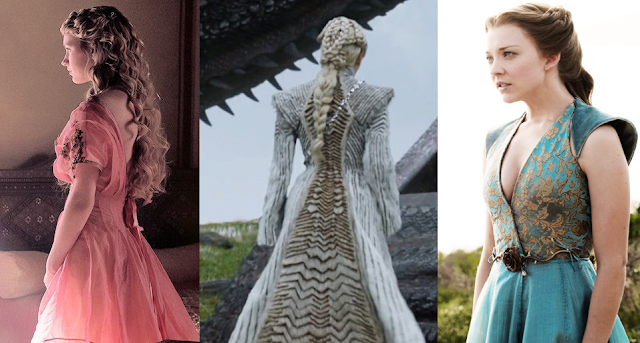 So Game of Thrones is back and I can't actually take this waiting-a-week-between-episodes malarkey. To help fill the GoT shaped hole, I thought I'd do another costume post. I feel like the costumes aren't going to be as spectacular this year, because there will be less variation in setting. But here are some of my favourites from throughout the series. (For a more in depth look at the costumes of the Lannisters, Tyrells, Daenerys or the Starks, see my earlier posts!) 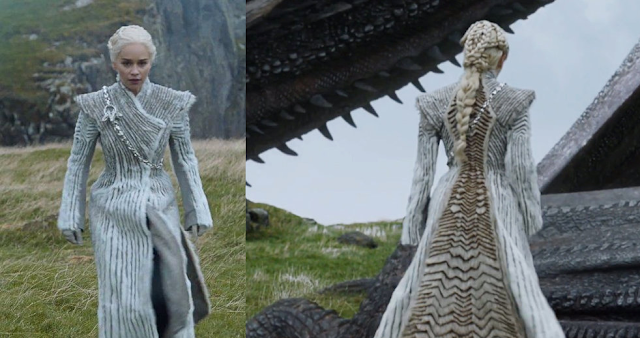 This was the first time we saw Daenerys in winter clothing and it really took my breath away. Just the shaping, and the detail cut into the (fake) fur, and the impact of the white against her silver hair. And then she turns around and the back. The detail like a dragon's tail - the whole thing was just gorgeous. 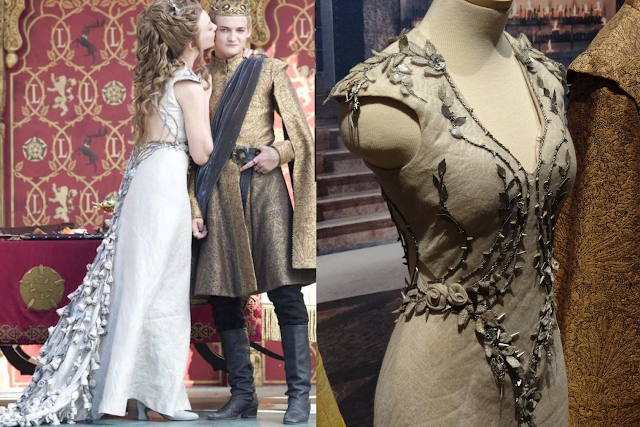 Other than that amazing train of fabric Tyrell roses, what I love about this dress is that it's so very Margaery. It's got an open back and a typically plunging neckline (Margaery is never shy about using her sexuality to get what she wants) but it's not as soft and feminine as her usual gowns. The thorns are a very prominent motif here, it's a dangerous looking dress. This is the wedding after all, where Margary's grandmother, the "queen of thorns" succeeds in assassinating the groom. And there is more to Margaery than she shows to the world, she's sharp and manipulative and has learnt a lot from Olenna. The dress is all Tyrell - there's no interweaving of Baratheon or Lannister, as on the dress Sansa wore when she married Tyrion. 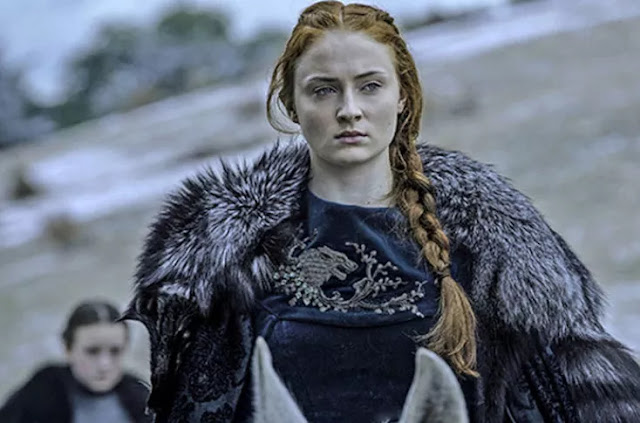 Fabulous embroidery as always, but I love this mostly for what it represents. It's the dress Sansa makes for herself once she's been re-united with Jon, and I love those scenes, when she's finally back with her own people. I also like that as Sansa begins to come into her own after escaping Ramsey, we're reminded, through her making this dress, that she was good at needlework. (Although where she found all the sequins and stuff up at the wall is anyone's guess.) It's like a little call-back to the old Sansa, reminding us she's still in there, after all she's been through. 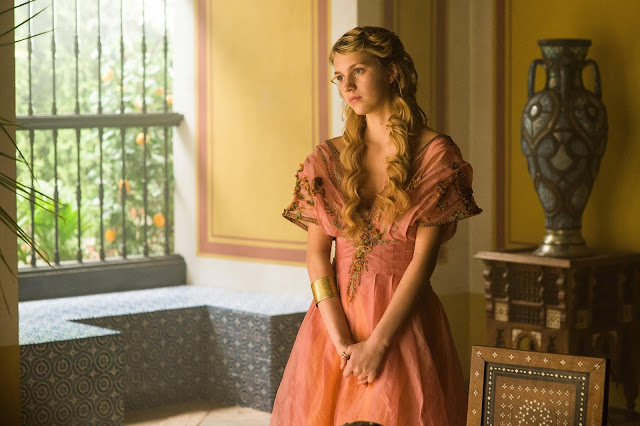 I think I can safely say that the majority of viewers were just waiting for those Dorne scenes to be over already, but Myrcella and Tristaine were cute (I wish they hadn't died so soon, they would have made for an interesting dynamic in Kings Landing!) and the costumes were incredible. I loved the different style of Dorne - hotter and more laid back, so more floaty fabrics, vibrant colours and less traditional styles. Myrcella got to show a bit more skin (possibly indicating a teenage rebellious streak, as well as the fact that she was embracing her new homeland) but what I loved best was the fairytale-princess quality to her clothes. Other than being a child of incest, she's a very un-Game of Thrones like character really - the genuinely kind, pretty little blonde princess, one of a pair of young lovers. And her clothes reflect that. The pink floaty dress she's wearing in her final scene is my favourite! 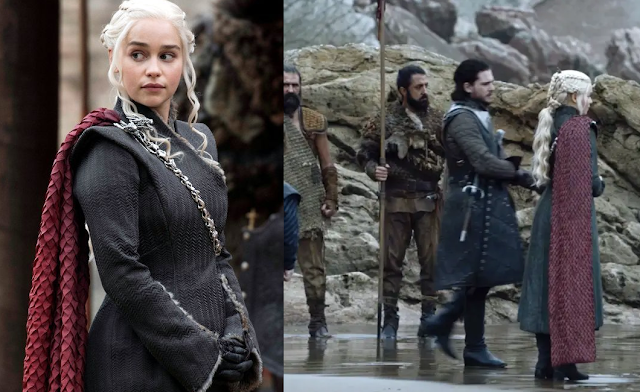 Daenerys has possibly had the biggest style evolution throughout the show - from soft Grecian styles to Khaleesi warrior gear, to Quarthian gowns to her trademark conqueror's blue, to her Queenly Myreen look, and now that coat. But when she first arrives on Westerosi soil and when she meets Jon Snow for the first time, she's in proper Targaryen regalia and I'm here for it. Red and black are the Targaryen colours and her hair stands out so well against them. I love the bit of fur at the edges of her sleeves (now she's come to a warmer climate) the dragon-scale pattern on the cloak (and dragon-y zig-zagging on the coat itself) and the little dragon clasp attaching the cloak to its chain. 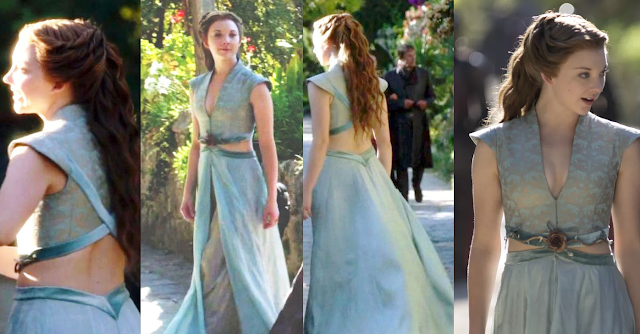 I love all of Margaery's clothes (except maybe not in series 2 - she made a couple of weird choices there) but I think a lot of that has to do with the colours. The Tyrells have the best colour scheme (I love Olenna's stuff too) and being in the south for most of her scenes, Margaery gets to indulge in some lovely floaty things in that beautiful turquoise-y colour. This dress is my favourite because I'm a sucker for side cut-outs. I love the flow of the skirt too and the shape and deign of the open back. Also the detail of the rose emblem is a nice touch.

Cersei and the embroidered shoulders 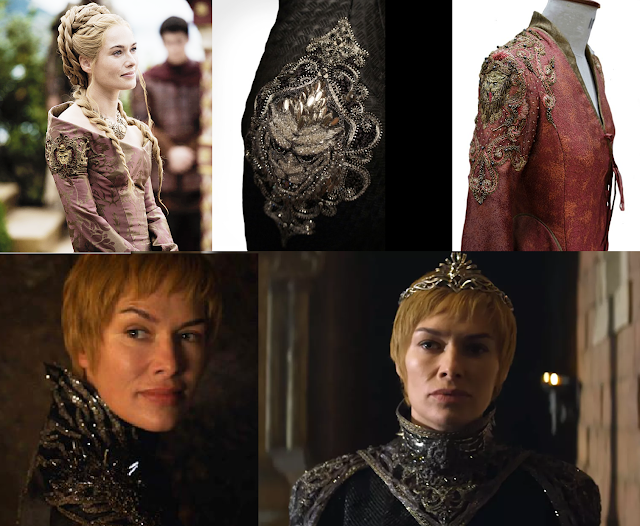 Cersei's another one with a massive style evolution, but one constant is that beautiful, intricate embroidery on her gowns and usually on the shoulders. Lots of lion motifs (and even some Baratheon early on I think) and later, when she's all in black, big armour-like collars and that spooky looking hand creeping round her neck (in that scene where she's getting revenge on Ellaria Sand - it really stood out to me for some reason.) 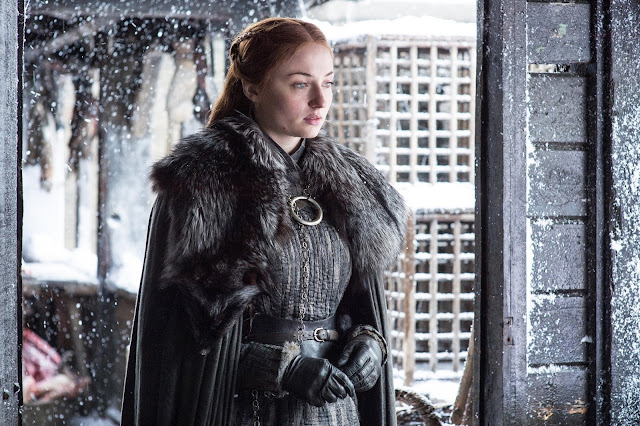 I love this, despite it's relative plainness, I think partly because Sansa wears it so well. She's powerful here, and confident and she stands tall and strides about. I like the detail of the quilting (because it's so cold) and the fur cape is reminiscent of the other Starks that have gone before. To be fair she looks like a model in everything because she's so tall and slim, but I think this outfit has the perfect balance of masculine and feminine and Sana suddenly looks grown up. She's not hiding in her big hooded cape or trying to be all femme-fatale as with her feather dress. She looks business-like and very much the lady of Winterfell. 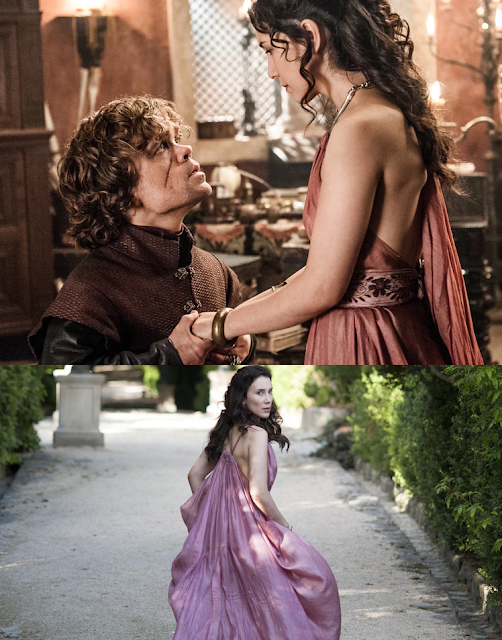 I never really had that 'I love it because it's pink!' phase as a kid, but I feel like I'm hitting it later in life. Pink and floaty stuff is just so pretty. I love the colour and the simplicity of the handmaiden's gowns, they're very feminine, almost Grecian or Roman in style, and I love that little floral waistband that cinches in the waist. Again, it's the south, so the handmaidens can get away with bare arms etc. but I wonder whether the costume designers had in mind King Robert's personality when they were creating the handmaiden look. He probably wouldn't have wanted the servants looking too buttoned up... 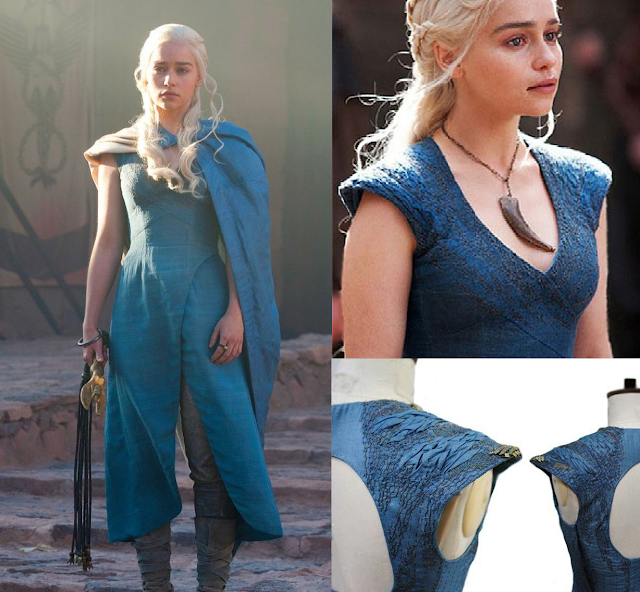 This list wouldn't be complete without this instantly recognisable dress, which Dany wears in the memorable scene where she burns that masters of Astapor (I think?) and wins the allegiance of the Unsullied. The blue is bold, vibrant and it makes her stand out. She's coming into her own after years in nondescript pastels (with her brother) and earthy Dothraki browns. The dragon detailing has been getting more and more prominent on her clothes since her pregnancy and now you can see it on her shoulders, and on the bodice. It's a very feminine look but she's also a traveller, a conqueror and it need to be practical too, hence the trousers and the boots and the simplicity of the style.

What are your favourite Game of Thrones costumes?