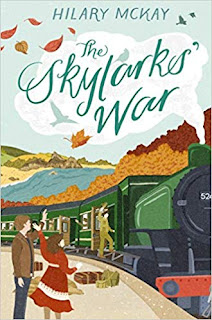 I just finished a really beautiful children's book called The Skylarks's War by Hilary McKay. I picked it up at work, because McKay was the author of the Casson books, a favourite series from my teens. And now she'd written some historical fiction? I was intrigued. I laughed and cried my way through Skylark's War and fell in love with the characters - as I had with the Cassson's originally, and also when I re-read the series a couple of years ago. But if I'd not been working at the library, where these books strayed across my path again, I would've missed out on all that. I would have missed out, too, on the later Worst Witch books by Jill Murphy, who I discovered had written three or more adventures for Mildred since I'd grown up. I'd have missed My Mum Tracy Beaker, where I caught up with Tracy as an adult, worried again that she wouldn't get her happy ending, and remembered how brilliant Jacqueline Wilson is at capturing what it feels like to be a kid.

I've read a fair few children's books in the past couple of years. I still read Harry Potter pretty regularly (which I still class as children's, not YA - especially the early ones)  I've dipped into the Narnias when I've needed something easy and familiar, and I read When Hitler Stole Pink Rabbit for the first time - which was amazing. Young adult has become a massive deal and YA readers will fiercely defend their right to read YA. And rightly so. But as an adult I think I get more out of kids books than I do books aimed at teens. There's not as much focus on romance and the romance that is there, is often subtle and lovely. There's usually a big focus on family and friendship, and despite the intended audience kids books have never been afraid to explore big themes.

With the best children's books you also read them in a totally different way once you've grown up. You see things from a different point of view. When I first read The Railway Children, I thought - why shouldn't they ask the old gentleman for money? He's rich and they're poor, he's kind, he'll give it to them and not mind. When you read it as an adult you realise why the mum gets so angry and you're dying of embarrassment at them asking for charity like that. When I first read The Illustrated Mum by Jacqueline Wilson, I thought, like Dolphin, that Star was cruel to her mum and awful for leaving her sister alone. Reading it now you realise that Star is way too young to be dealing with Marigold for so long. She's not mean, she's admirable. It's great writing, but it does make you feel old when you start agreeing with the parents not the kids. 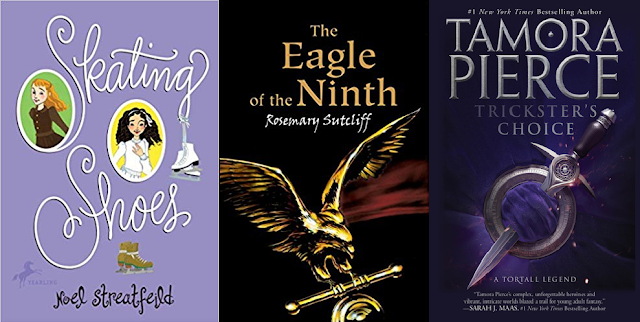 Children's classics too, I always think are worth reading. Classics can be heavy going even as an adult, and the writing style in older children's books is often too much when you're actually a child. As an adult though, that's still all there to discover. I'm making it my mission to read some of the other Shoes books by Noel Streatfeild, and I want to try Treasure Island again (it went totally over my head when I read it at about eleven.) I want to read some more Rosemary Sutcliff (I loved The Eagle of the Ninth) and I've spotted some more Tortall books (by Tamora Pierce) on the shelves in work. Maybe it's time I found out what happened to Alanna's kids?

So basically, I think that children' books, like YA, are just as valuable reading as books aimed at adults. If a book is well written it shouldn't matter that the protagonists are young or that there's no sex or swearing. We were all kids once so we should be able to relate. I'm going to keep reading kids books - although maybe I'd draw the line at The Dinosaur that Pooped a Planet.

What do you think? Would you pick up a children's book you'd never read before? Are they best for nostalgia or best left in the past?