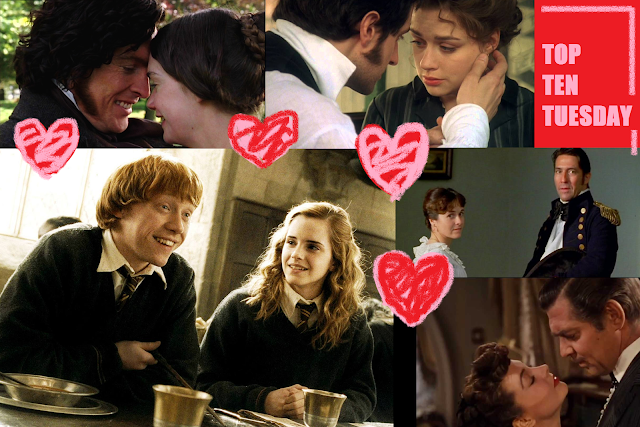 (Posting this a little early as I'm actually in China! My sister's gone to drop off our friend at the airport but I'm here for a couple more days - off to see the Terracotta Warriors tomorrow :D - so here's one I prepared earlier.)

So this week's Top Ten Tuesday is a Valentine's theme. The last couple of Valentines days' I've tried to turn the list on its head a bit, but this year I'm going all out with the mushy stuff. Below are my favourite couples in literature at the moment - not that I'd necessarily want all of these relationships, and some are fatally flawed. But these are the couples who feel real and interesting to me, the ones that occasionally make you think 'I want a bit of that.'

“I am not an angel,' I asserted; 'and I will not be one till I die: I will be myself. Mr. Rochester, you must neither expect nor exact anything celestial of me - for you will not get it, any more than I shall get it of you: which I do not at all anticipate.”

Why I love them: She's quite a quiet, serious sort of girl, but they have so much banter. I like how they're on the same wavelength and they see each other as equals. He's such a big character but she always stands up to him and always plays by her own rules.
Best bits: When they first meet on the road and when they're first getting to know each other. That proposal! And when they meet for the first time after the fire.

Ron and Hermione
from the Harry Potter series by J.K Rowling

"Why," demanded Ron, seizing her timetable, "have you outlined all Lockhart's lessons in little hearts?"

Why I love them: I love how gradually their relationship is built up over the seven books, and how even from early on you can see how much of a pair they are. I love their bickering and how jealous they both get. They're so different but that's sort of what makes them work.
Best bits: I love when Ron rushes to Hermione's defence when Snape calls her a know-it all and gets detention - even though he calls her that constantly. Their first kiss, obviously. I love Ron being jealous of Krum and when Hermione sets the birds on Ron over the Lavender business. And I like all the little moments when you actually see them being considerate of each other - or when Harry notices something about their behaviour towards each other that makes him feel like a third wheel.

Scarlett and Rhett
from Gone with the Wind by Margaret Mitchell

"Whenever she spoke her mind, everyone [else] seemed to be shocked. Talking to Rhett was comparable only to one thing, the feeling of ease and comfort afforded by a pair of old slippers, after dancing in a pair too tight."

Why I love them: It's such a long book so there's so much time to watch them together - and they could just be so perfect if they played it better, and didn't bring out the worst in each other most of the time. I like how, although the attraction's always there, for years and years they're friends first. He really gets her and although he winds her up constantly, underneath it all he always has her back. If only she understood him as well...
Best bits: Their first meeting, when he bids for her at the bazaar, when she comes to see him in jail, when he comes to see her for the first time after the jail meeting... when he looks out for her when she's pregnant with Ella - basically all of it. Ooh and that scene early on where he straight up asks her to be his mistress. Her reaction is priceless. Oh and when her Dad comes to take her home in disgrace after the bazaar, and Rhett takes him out and gets him drunk. 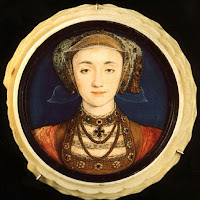 "As long as you are fully yourself, as you have been with me -  he must see in you what I have seen. You have come alive Anna. Don't ever shut yourself up again."

Why I love them:  I love this interpretation of the Anne of Cleves story, and I love the tenderness between Anne and Holbein, which sort of keeps her going through all the horribleness with Henry, and sort of makes it worse - she's just beginning to open up to love and all the feelings that come with it, before she's branded the Flanders mare.
Best bits: When they first meet and he's flirting away because he thinks she's just an attractive ladies maid. When he starts to paint her. When they have that 'almost' moment the night before she's about to go to England - and when time he comes to see her at Richmond after Henry's visit.

Anne Elliot and Captain Wentworth
from Persuasion by Jane Austen

"Tell me not that I am too late, that such precious feelings are gone for ever. I offer myself to you again with a heart even more your own than when you almost broke it, eight years and a half ago. Dare not say that man forgets sooner than woman, that his love has an earlier death. I have loved none but you."

Why I love them:  I like that, unlike the other Jane  Austen couples, you feel like they really know each other inside out, because of their history. They're already in love, rather than falling in love, and so it just feels more complicated and genuine. You get Wentworth's POV a bit more than some of the other heroes, and he's a bit more human -  he acts petty and jealous but that's because he loves Anne so much.
Best bits:  All the bits in Bath. Especially that letter.

“He shook hands with Margaret. He knew it was the first time their hands had met, though she was perfectly unconscious of the fact.”

Why I love them: He's such a good man, and he loves her so much! I like that despite the early dislike, they both have a lot of respect for each other throughout. They have different politics and experiences and their discussions get heated - but they do discuss real stuff and they listen to each other.  They're both kind, and clever and determined and you just want them to hurry up and get together already.
Best bits: The proposal and the bit at the mill, and when she starts to realise that she likes him. And when he finds out about Fred from Higgins! (I love that in the mini-series too.)

Ross and Demelza Poldark
from The Poldark Saga by Winston Graham

"He found, quite to his surprise, that he was happy. Not merely in Demelza's happiness, but in himself. He couldn't think why. The condition just existed within him."

Why I love them: As the books go on, I don't particularly like them as individuals. Or definitely not Ross anyway. And their marriage has flaws. But I love how their relationship is written. She is just so likeable in those early books and it's so lovely when Ross realises that he's in love with her and that he's happy. They go through good and bad times in a realistic way and they have their ups and downs, but when they're in a good place it's so nice to read. They feel like a genuine couple and a real family.
Best bits: When they go fishing for the pilchards, when they first get together (was not expecting it to go that way when I first read it!) their first Christmas at Trenwith. The bit when he buys her the stockings...


Llewellyn and Joanna
from Here be Dragons by Sharon Kay Penman

Why I love them: Another fatally flawed couple, but I love how so much is thrown at them. They go through good and bad times, but their relationship is so well written. And that ending!! A lot of it is hard to read, I can never decide how much I like her, and maybe he's a bit too perfect. But it's a while since I've ever been so invested in a fictional couple.
Best bits: The scene where Llewellyn has to do homage to John, and Joanna very publicly shows where her allegiance lies. That whole bit after the wedding when she's falling for him. When she burns his bed! (and the scene that comes after.)

Caddy and Michael
from the Casson Family series by Hilary McKay

Why I love them: They make me laugh and I like how he is so thrown off balance by her, but pretending not to be, while she isn't exactly subtle but then when she gets him it scares her. So much of their later relationship happens off page, because it's all POV chapters and mostly Rose, but I like how you keep rooting for him. As a reader you love him like the family does.
Best bits:  Their lessons together.

Beatrice and Benedick
from Much Ado About Nothing by William Shakespeare

"I love you with so much of my heart that none is left to protest."

Why I love them: They're like the original rom-com couple, aren't they? They tear strips off each other but they're obviously meant to be together. Considering how long ago this play was written, they both seem very modern too, especially her. And because he likes her, that makes me like him.
Best bits: All their back and forth dialogue. I don't understand half of it, because it's Shakespeare, but I understand enough to make me laugh.

Who are your favourite fictional couples?