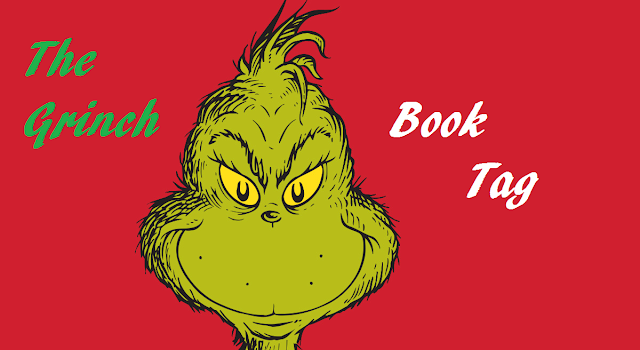 So, disclaimer 1: I'm not a Grinch, I love Christmas. Disclaimer 2: I actually can't stand the Grinch film, in any incarnation. But this tag (which I spotted at Jessticulates and is originally by Sam at Thoughts on Tomes) looked fun, and I've not done a Christmassy post yet this year, so here you go!

Half of the lights on the Christmas tree are burnt out:Name a book/series/character that started out good but then went downhill

The Hunger Games. First book was perfect. I loved Catching Fire even though it had it's flaws but I could barely finish Mockingjay. I couldn't even picture what was going on half the time and the ending was indescribably depressing.

Annoying Great Aunt Sally who will not leave you alone:Name a book that you didn’t enjoy, but everyone else seems to love so it never goes away

The Great Gatsby. Gatsby themed parties I can get behind. But don't ever make me read that book again. The best thing about it was that it was short.

Your pets keep knocking over the Christmas decorations:Name a character that kept messing things up for everyone else (can’t pick a villain!)

Ross Poldark. Does he ever feel remorse or does he always have to be the victim while he's busy ruining lives? Also Davydd y Gruffydd from The Welsh Princes series by Sharon Penman. Why do you do it Davydd? Why???

You can't resist a peek at your presents...:Name a book you were spoiled for

I was in year five and a devil child in my class thought it would be funny to shout the big death from Order of the Phoenix across the room, when I was still only halfway through. No forgiveness.

Marianne Dashwood. I'd rather have any of the Bennetts as my sister, including Lydia. Marianne is such a brat.

‘All I Want for Christmas is You’ is playing and it’s giving you anti-romantic feelings:Name a couple you couldn’t stand

Emma and Dexter in One Day. He was vile and she was irritating.

That scratchy homemade woolly jumper you got for Christmas years ago but won’t get rid of:Show some books that have been sitting on your shelves for a while, and you aren’t motivated to read, but you don’t have the heart to get rid of

I've got a big pile from the library that I need to finish and take back - that Stephen King one about Kennedy (which is good so far but so long I can't face going back to it)  The Red Pony (which I've started and hate, but it's so short I feel like I should finish it) Frenchman's Creek by Daphne du Maurier (which I want to read before I go tall ship sailing in Cornwall, but her books are never exactly cheery.)

Grandma Got Run Over by a Reindeer:Name a character death you are still mad about (warn people for spoilers! You can also use TV or movie deaths)

Lupin and Tonks. They didn't both need to get it. Still, it's not so much that they died but that a) they didn't get a death scene and you just saw them laid out in the great hall and it was like a sucker punch to the stomach, b) She only killed them to make a point about war orphans. Enough people died. There was no need.

Town is overly crowded with holiday shoppers:Name a series that has too many books in it/went on too long

Eragon. (Inheritance series.) If you plan to do a trilogy, do a trilogy. Don't get self-indulgent.

The Grinch:Name a main character you HATE (No villains again!)

Will in Me Before You. Maybe hate is too strong a word, but he was condescending and entitled and a hypocrite. If you want to go to Switzerland that's your business, but it hardly gives you the right to tell her she's wasting her life.