All the books I read this year: Five word reviews

So 2019 is nearly upon us, and this year I'm prepared enough to present you with a list of all the books I read this year! Which isn't actually that many, it turns out, when you compare it to other book blogging people. I wish I could say that was because I'm just so busy, I don't have the time to read like all you lucky people (don't you hate that?) but If I'm honest I think I watch too much TV.

I thought I'd do some five word reviews, which turned out to be surprisingly difficult but also satisfying. As always, a lot of these are re-reads (denoted by the little star) and I also hadn't realised that I read so many kids books... But I actually read a lot more new and adult stuff this year too, thanks mostly to working in a library now. Although I need to make a new years' resolution to stop taking the withdrawns home. I did not need a new, battered copy of The Hobbit, even if it did have the original Tolkien illustrations in...

The Princess Bride by  - Readable. Skip the prologue though.

Sylvester by Georgette Heyer - similar to above, less craziness.

The Commitments by Roddy Doyle - Funny, but film was better.

Mansfield Park by Jane Austen* - Much better than people imply.

High Fidelity by Nick Hornby - Funny but not my favourite.

John by Cynthia Lennon - Interesting and genuinely not bitter.

Me Before You by Jojo Moyes* - Bit manipulative but good read.

Caddy Ever After by Hilary Mckay* - weakest in series...still wonderful.

Still Me by Jojo Moyes - Better than the second one.

Persuasion by Jane Austen* - The most romantic Austen novel

The Other Way Round by Judith Kerr - poignant, interesting sequel... forgetable title.

A Small Person Far Away by Judith Kerr - sad, but worth-reading finale.

A Storm of Swords 2: Blood and Gold by George R.R Martin - Exciting! Best instalment so far!

Falls the Shadow by Sharon Penman - Too long but good characters.

The Worst Witch Saves the Day by Jill Murphy - Nice catching up with Mildred.

Lethal White by Robert Galbraith/J.K Rowling - Gripping but too many stereotypes.

The Worst Witch to the Rescue by Jill Murphy - Another good one, quite same-y.

Small Steps by Louis Sachar* - Not Holes, still quite special.

North and South by Elizabeth Gaskell* - Even better this time around.

The Tales of Beedle the Bard by J.K Rowling* (Illustrated by Chris Riddell) - Love this new illustrated version! 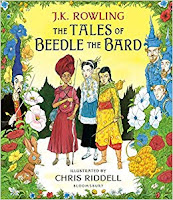