Over the last few days I've been feeling awful with some kind of flu thing, and while searching for something comforting to listen to (while I lay in bed trying not to think about how bleugh I felt) I came across this podcast. It's pretty old but listening to likeable people dissecting Harry Potter chapter by chapter (I listened to my favourite bits of Goblet of Fire) was the most comforting thing. It also gave me the idea for this week's Top Ten Tuesday post, which is all about memorable villains. Everyone buzzes off Umbridge, and obviously Voldemort, but there are so many well-drawn villains in the Harry Potter series, so why not shine a spotlight on some of the others?

'How are you?" she said, standing up and holding out one of her large, mannish hands to Dumbledore. "I hope you saw my piece over the summer about the International Confederation of Wizards' Conference?"
"Enchantingly nasty," said Dumbledore, his eyes twinkling. "I particularly enjoyed your description of me as an obsolete dingbat."


I might hate her even more than Umbridge. She's so utterly without moral scruples and will do anything for a good story. She seems to relish wrecking people's lives (she purposely goes after Hermione for petty revenge, and who could forgive her for taking advantage of Hagrid the way she does?)  and the worst part is she has so much power. Because, as with the real-life press, people believe what they read in hard print. She's a wonderful character though and we get some great scenes out of her. I love Snape reading the Witch Weekly article out to the class...

"The Dark Lord and I," [he said] and he looked completely insane now, towering over Harry, leering down at him, "have much in common. Both of us, for instance, have very disappointing fathers... very disappointing indeed. Both of us suffered the indignity, Harry, of being named after those fathers. And both of us had the pleasure...the very great pleasure...of killing our fathers, to ensure the continued rise of the Dark Order!"

Goblet of Fire will always be my favourite Potter book I think. There's lots of fun new stuff (Yule Ball, Triwizard Tournament, Quidditch World Cup) and the plot is so well constructed, so dark and twisty. Also the pay-off is immense. Barty Crouch Junior is the first Death Eater we meet that really, truly believes in Voldemort's cause and is willing to risk everything for it, but what makes him so scary is how close he came to success. He hoodwinked everyone, including Dumbledore, but most especially the reader. His end is pretty grisly too.


Dementors are among the foulest creatures that walk this earth. They infest the darkest, filthiest places, they glory in decay and despair, they drain peace, hope, and happiness out of the air around them. Even Muggles feel their presence, though they can’t see them. Get too near a Dementor and every good feeling, every happy memory will be sucked out of you. If it can, the Dementor will feed on you long enough to reduce you to something like itself — soul-less and evil. You’ll be left with nothing but the worst experiences of your life.


Talking of Barty Crouch's end, the soul-sucking, happiness draining Dementors are Harry's worst fear and rightly so. A metaphor for depression and a sinister presence from when they first arrive in the books, they create a massive impression from their horrid description alone, although they never speak.

He had always thought of Fudge as a kindly figure, a little blustering, a little pompous, but essentially good-natured. But now a short, angry wizard stood before him, refusing, point blank, to accept the prospect of disruption in his comfortable and ordered world - to believe that Voldemort could have risen.


This is a funny one, as in the first few books (and arguably the last couple too) I wouldn't call him a villain. But in those final chapters of GoF he shows his true colours, and in Order of the Phoenix he's definitely gone to the dark side, if only by being a huge pain, and putting obstacles in the way when he could have made it all so easy. It's horrible how he turns on Harry, how he lets his stubborn-ess and prejudice and ambition turn him into a horrible and hate-able little person. I quite liked him in the early books, but his character is so well set up - and sadly so believable. 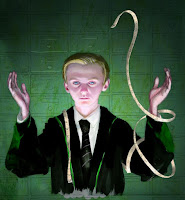 "I'm quite surprised the Mudbloods haven't all packed their bags by now," Malfoy went on. "Bet you five Galleons the next one dies. Pity it wasn't Granger..."

I feel sorry for Malfoy towards the end, I do. And yes, he's only a kid and he didn't have much hope with a dad like his. But he's also a bully and he has literally no redeemable qualities. The way he treats Hagrid, Hermione and Neville in particular, really grates on me. (As much as I love Ron though, that 'Weasley is our King' song still cracks me up.)

"Do it," said the stranger standing nearest to Harry, a big, rangy man with matted grey hair and whiskers, whose black Death Eaters robes looked uncomfortably tight. He had a voice like none that Harry had ever heard; a rasping bark of a voice. Harry could smell a powerful mixture of dirt, sweat, and unmistakably, blood coming from him. His filthy hands had long yellowish nails. [...]
Greyback grinned, showing pointed teeth. Blood trickled down his chin and he licked his lips slowly, obscenely. "But you know how much I like kids, Dumbledore."

A late entry into the series but no less horrible for that. He's described in such a gross way and the idea of a werewolf targeting people - particularly kids - even while in human form, is just *shudder* not nice. 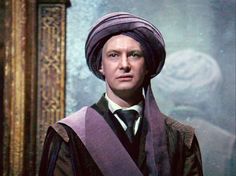 "He is with me wherever I go," said Quirrell quietly. ‘I met him when I travelled around the world. A foolish young man I was then, full of ridiculous ideas about good and evil. Lord Voldemort showed me how wrong I was. There is no good and evil, there is only power, and those too weak to seek it ...

I almost forgot Quirrell when making this list, but I think he deserves his place as the first shock villain of the series. For who would suspect poor, st-stuttering Professor Quirrell? He isn't particularly impressive or threatening when compared with the Voldemorts of this world, but that doesn't mean he can't throw a spanner in the works. Ambitious, suggestible, weak - and would quite happily murder innocent children and have no qualms. That's a dangerous combination when you think about it. Plus, I never did defeat him on the PC game...

"Longbottom?" Repeated Bellatrix, and a truly evil smile lit her gaunt face. "Why, I have had the pleasure of meeting your parents, boy."


From when you first see her in Dumbledore's pensieve and discover that it was Neville's parents she was boasting about torturing into insanity, you know this is a woman you can quite happily hate. And it just gets worse. Murdering Sirius, torturing Hermione, killing Dobby - and that horrific baby voice ("the little baby woke up fwightened and fort wot it dweamed was twoo?") she might possibly have the resume to inspire the most hate of any Harry Potter villain. Plus she's absolutely stark raving mad.

"Malfoy got Hermione!" Ron said. "Look!"
He forced Hermione to show Snape her teeth - she was doing her best to hide them with her hands, though this was difficult as they had now grown past her collar. Pansy Parkinson and the other Slytherin girls were doubled up with silent giggles, pointing at Hermione from behind Snape's back. Snape looked coldly at Hermione, then said, "I see no difference."

So Snape wasn't all that bad when it came to the big things, and if he hadn't had a terrible childhood and been badly bullied at school (the young Marauders perhaps have as much right as Draco Malfoy to be on this list, why people are keen for a prequel about them in their "bullying toerag" stage, I'll never understand) he might have turned out alright. I feel sorry for him more than anything, I appreciate his love for Lily and his friendship/rivalry with McGonagall. I'll never get over the way J.K Rowling gave him the bleakest death imaginable. But - as a teacher you have certain responsibilities, and bullying your students is low. The way he treats Neville is abominable and Harry hardly deserves to be whipping boy for his father's crimes either. He might be brave and self-sacrificing, but he's still not nice.

"Go? said Aragog slowly. "I think not..."
"But-but-"
"My sons and daughters do not harm Hagrid on my command. But I cannot deny them fresh meat, when it wanders so willingly into our midst. Goodbye, friend of Hagrid."

Okay, so maybe it's in his nature and he doesn't want his kids to starve. But big spiders are scary, and this was just out of order.

Who's your favourite Harry Potter villain?