I was talking to my sister recently about the first films that ever made us cry - hers was E.T, although she can't remember, mine was Gypsy. (She was struggling to understand a- why I would cry at a film about a stripper and b- why I was watching said film at a young age). I love trying to remember stuff like that, so I've been looking for a good tag about 'bookish firsts'. Couldn't find one, so I've made my own. I've included 'lasts' as well, so you get a bit of comparison. Anyone who wants to appropriate this tag, you are, of course welcome. 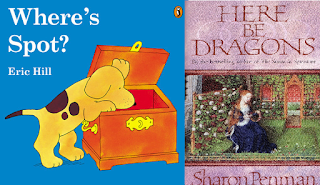 Embarrassing admission to start. My first word was 'Spot'. As in, Spot the Dog. So I'm assuming my first favourite book was one of the Spot books by Eric Hill. I think 'Where's Spot?' The most recent book I've mentally added to my favourites is Here be Dragons by Sharon Penman. It somehow manages to be simultaneously heavy and historical, and trashy and fun. Definitely one I'll re-read. 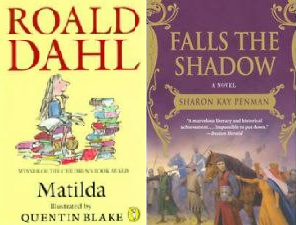 I'm not sure if it was the first, but I remember my mum reading Matilda to me, and I must have been younger than five as I remember thinking that I was nearly as old as Matilda at the beginning. My current read is the Here be Dragons sequel Falls the Shadow. It's good, but not great.

First/last time you cried at a book 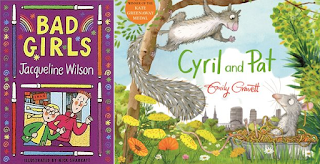 First time was probably something by Jacqueline Wilson. I think Bad Girls, as that and Double Act were the first two I read. Vicky Angel is the weepiest though. Or maybe Dustbin Baby. Those books were like emotional torture. Embarrassingly, I'm always crying at picture books in work and having to hide from readers so they don't see. I was not expecting to get teary at a funny story about a squirrel and a rat who make friends. But it was poignant, okay?

First/last character you fell in (romantic) love with 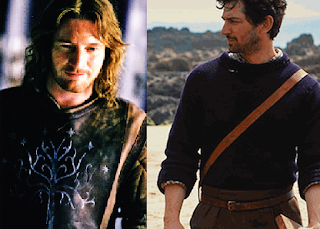 I was twelve years old and his name was Faramir of Gondor. I was so shocked when film Faramir went after the ring - that just wasn't him! I've never re-read Lord of the Rings and I'm a bit scared to, just in case he doesn't live up to my expectations. Plus, it's a lot harder going than I remembered...  More recently, I had a big crush on Llewellyn Fawr in Here be Dragons, but the last character I really fell for was Dawsey in The Guernsey Literary and Potato Peel Pie Society. And that was even before Michael Huisman in the film. 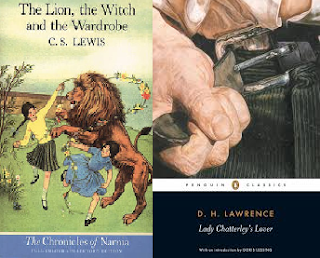 I think The Lion the Witch and the Wardrobe was my first children's classic. My first adult classic, that I read on my own, was probably Lord of the Rings. My most recent classic read was, erm, Lady Chatterley's Lover.  So a bit different. 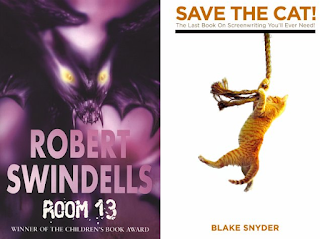 In year seven we did a book called 'Room 13' about a girl who goes on a school trip to Whitby and there are lots of sinister goings on to do with Dracula. It's a kids horror novel basically, and I think she and her friends stake him at the end with a souvenir stick of rock, but I could be making that up. The last book I read for uni purposes was Save the Cat which is a book on screenwriting. Really interesting and useful - and an easy read too.


First/last book you recommended to a friend 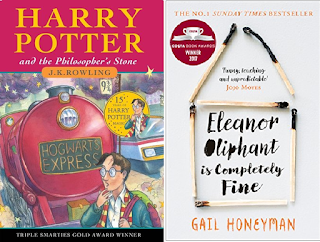 I think I recommended Harry Potter to a fair few people as a kid. And I still do. Here be Dragons seems to be featuring heavily here, but I made my my mum start reading it recently. And I've recommended Eleanor Oliphant to lots of people too.

What are your earliest book memories?