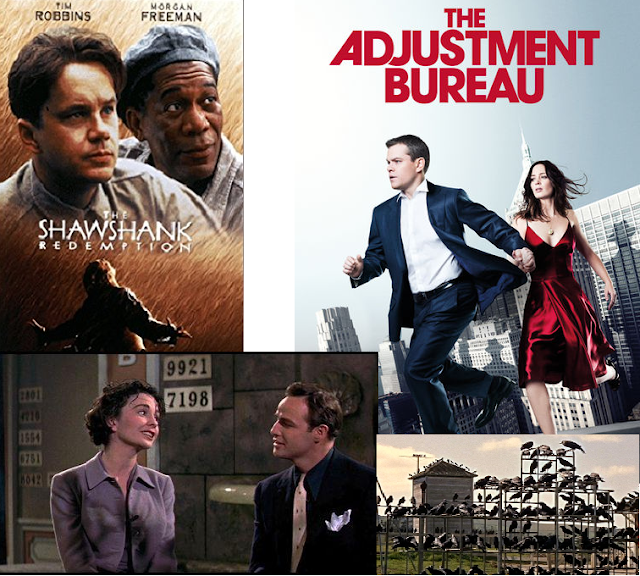 (Note: I meant to post this yesterday, obviously, but forgot.) This week's Top Ten Tuesday (hosted at That Artsy Reader Girl) is all about your favourite short fiction, i.e novellas and short stories. I'm always very impressed when I read a short story - the best ones manage to be neat and to the point yet also packed with meaning. Which is why they make great films! Here are a few you might want to seek out the source material for...

The Different Season collection is my only exposure (so far) to Stephen King's writing, but Rita Hayworth and the Shawshank Redemption is 100% worth a read. I'm a huge fan of the film so it was difficult not to hear Morgan Freeman's voice in my head the whole time I was reading, but still. The film is so long, and the book is so short, but it sticks surprisingly close to the original text. You even find out a bit more backstory in the book. The only noticeable difference is Red's ethnicity - in the book, when he says 'maybe it's coz I'm Irish' he's not joking!

Another one from the same collection (Apt Pupil was also made into a film, with Ian McKellan - but you wouldn't catch me watching that one...) but very different from Shawshank,  Stand by Me is now considered a teen classic and shines a light on friendship between boys in that kind of in-between stage. The acting from the kids is also surprisingly good, especially from River Phoenix as the friend from the wrong side of the tracks who worries he'll only ever be seen a certain way.

One of my favourite musicals of all time (what's not to like about a musical with Marlon Brando?) Guys and Dolls is inspired by the writings of Damon Runyon, and loosely based on two stories in particular. Runyon's short stories are notable for the way the characters speak - a sort of formal, 1930's gangster English - which is fun to read and even better when spoken by Frank Sinatra and Brando. Plus I love the songs.

I've not read this one but I loved the Adjustment Bureau - it's so underrated. The Chemistry between Emily Blunt and Matt Damon is insane. And the story is so different and clever. Phillip K. Dick is famous for his sci-fi and has been adapted a lot. But this film needs more credit!

The Birds
based on a short story by Daphne du Maurier

(Disclaimer: Just realised this is a fan-made trailer, but it's good!) As someone who is not the biggest fan of birds (if you'd had to chase  them round the house after your cat had brought them in alive, you wouldn't either) this film gives me the shivers. If the birds really attacked we would genuinely have no hope. But I definitely want to read this one - Daphne Du Maurier has a very atmospheric, almost sinister writing style, so I can imagine her horror is pretty terrifying.

Brokeback Mountain
based on a short story by Annie Proulx

I tried to watch this once but it was very slooow to get going. Might try the novella and see if that gets me more interested.

The Curious Case of Benjamin Button
based on a short story by F. Scott Fitzgerald

From the author of The Great Gatsby comes a story that's a whole lot weirder. Which tends to be the case with short stories I think - it's easier to experiment. Benjamin Button is born an old man and ages backwards... which is to say he gets younger and younger while everyone he knows is getting older. It's a clever twist on the immortality story but Ii could never get on with the film - it looked a bit dreary to me.

The more I see of Phillip K. Dick the more I realise that Black Mirror (as wonderful as it is) isn't all that original. I watched this one in school when we were doing 'free will and determinism' in R.E (the R.E teachers had a film for literally everything) and it's an interesting concept. Technology has advanced so that the police can see crimes before they actually happen.  The perpetrators are arrested before they can actually do anything, and the murder rate has gone right down. But what if the system gets it wrong? It's another example of authors using short stories to explore an interesting concept.

I've not watched this because...I can't stand Ben Stiller. Danny Kaye starred in the original, but I'm not his biggest fan either. Anyway, Walter Mitty is an interesting one because there have been two films made of James Thurber's most famous work (first published in the New Yorker in 1939) and neither stick particularly close to the original. Why do that? Do they like the title? The concept? What?

More Daphne du Maurier, and I do think that woman had a slightly twisted mind. I always think this classic film looks proper un-nerving and horrible, which is probably why I've never watched it. But, you know, it was critically acclaimed.

Do you have a favourite short story? Have you read any of the books these films are based on?