Top Ten Tuesday: Series' I gave up on that I may or may not go back to... 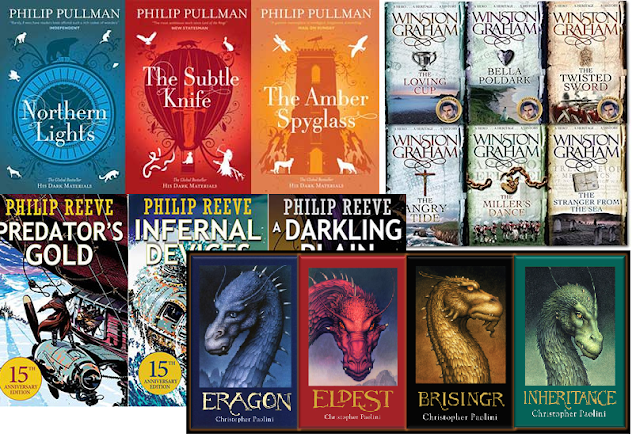 This week's Top Ten Tuesday (hosted at That artsy reader girl) focuses on series' that we've abandoned. For me though, an abandoned series isn't forever - sometimes you just need a break, or to be in the right head-space. Just because book two in a series is terrible, doesn't mean book five won't be amazing. Is it worth sitting through the bad for the good? Usually not, but you can always skim read! Here's a few series that I will go back to one day. Or so I tell myself...


His Dark Materials by Phillip Pullman
Loved the first book but then I couldn't take to Will in the second one and gave up on Amber Spyglass completely. I know they're supposed to be kids books, but maybe I'd appreciate them better as an adult? And now that James McAvoy has been cast as Lord Asriel in the series I feel like I should give them another go!

The Poldark Saga by Winston Graham
I read these without stopping for breath up until the end of Angry Tide, despite the story being somewhat soured for me by events in Warleggan. But once it moved on to the next generation I couldn't get invested and abandoned Stranger from the Sea completely. I enjoyed the other books so much though, I feel like I should give the Poldark kids another shot.

The Mortal Engines Quartet
I loved the first one but it was so fast paced, that when the second one didn't grip me so immediately I packed it in. I'll probably go back to these though, when the films start churning out. Despite the fact that Hester's lack of real disfigurement is filling me with rage...

Tucket's Travels by Gary Paulsen
Read the first two as a kid but didn't realise there were more. I am now in possession of the five book omnibus but it's been sitting on my shelf forever. I will read it at some point though. I swear.

The Sharpe Series by Bernard Cornwall
There are so many books and the battles do nothing for me - I'm solely in it for Sharpe having run-in's with snobby fellow officers. As he gets higher up the greasy pole there's less of this as he's so famous by this point they can't but have respect for him. But I'm finally up to Waterloo so now I have to go back to the books. Only two to go then I've read them all!

A Song of Ice and Fire by George R.R Martin
I read the first three and a bit volumes, but kept holding myself back because I didn't want to get spoilers for the series (I know, I know.) And then I lost my thread. And I had several reports that the later books aren't much cop. However, if George R.R. Martin ever bothers to finish Winds of Winter, it would be interesting to see what different directions he takes the story in - especially with characters who are dead in the series.

The Worst Witch by Jill Murphy
Who knew Jill Murphy had written more adventures for Mildred since I was of an age to be reading about her? I'll need to get hold of them somewhere.

Eragon by Christopher Paolini
Read the first couple as a kid, but when the author announced there were going to be, like, three more instead of the planned trilogy, I decided I couldn't be bothered. I still sort of want to know what happened in the end though.

Outlander by Diana Gabaldon
I started the first one but the writing just seemed...bad. However, I liked the first series and the idea for the whole thing, and I feel like I could get into the books if I made a real effort at the beginning.

The Roman Mysteries by Caroline Lawrence
There were just so many and they were so hit and miss - and I grew up before she got to the end. Googled what happened in the last book though, since I was curious how the couples worked out. Nubia was much too good for Aristo if you ask me.

What series might you give a second chance to?