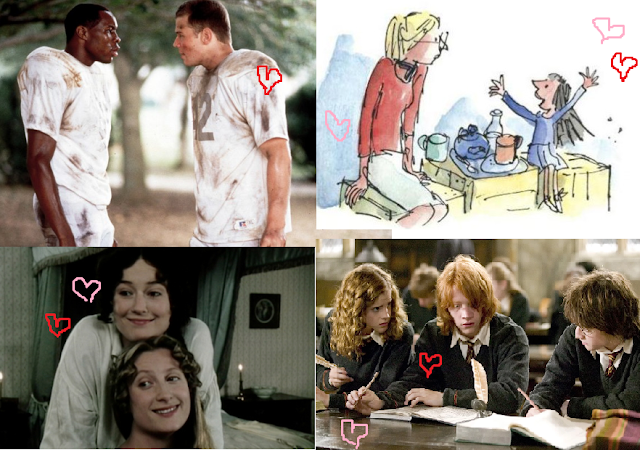 This week's Top Ten Tuesday (now hosted at That Artsy Reader Girl) in honour of Valentine's Day is a love freebie. There are lots of different kinds of love though, not just romantic, so I thought I'd dedicate this one to my favourite friendships in literature, in film and on TV. There were too many to narrow down to ten so I've got... thirteen this time.

Harry, Ron and Hermione (and Hagrid)
from Harry Potter by J.K Rowling 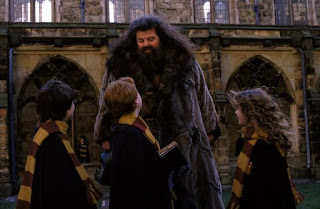 "Hagrid!" Hermione shouted, pounding on his front door. "Hagrid that's enough. We know you're in there! Nobody cares if your mum was a giantess Hagrid! You can't let that foul Skeeter woman do this to you! Hagrid, get out here, you're just being - "
The door opened.
Hermione said "about t - !" and then stopped, very suddenly, because she found herself face to face, not with Hagrid, but with Albus Dumbledore.
"Good afternoon" he said pleasantly, smiling down at them.
"We - er - we wanted to see Hagrid." said Hermione, in a rather small voice.
"Yes, I surmised as much." said Dumbledore, his eyes twinkling.

When I think of fictional friendships, Harry, Ron and Hermione are the first that spring to mind. Fiercely loyal and supportive of each other, I get so invested that when they fall out (particularly when Harry and Ron aren't speaking to Hermione in the third book, and Ron and Harry's two huge bust ups in books four and seven) it really hurts, because you know how much they love each other. I think the trio are a realistic depiction of teenage friendship, but I also think that there's a fourth member to their group who is often not considered. Hagrid's been there from the beginning, and although he's Harry's friend first and foremost, his relationship with Ron and Hermione is also really close which I love. When there's fallings-out or one of the three is feeling down, sure enough you'll find them at Hagrid's hut. And woe betide anyone who badmouths Hagrid in front of them.

Lizzie and Jane
from Pride and Prejudice by Jane Austen 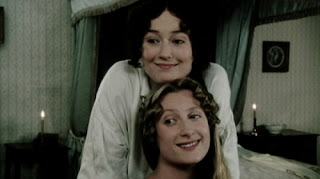 "Oh! Lizzy...If I could but see you as happy! If there were but such another man for you"

"If you were to give me forty such men,  I could never be so happy as you. Till I have your disposition, your goodness, I never can have your happiness. No, no let me shift for myself; and perhaps, if I have very good luck, I may in time meet with another Mr. Collins. "

There are lots of interesting friendships in Pride and Prejudice - Darcy and Bingley, Elizabeth and Charlotte, Kitty and Lydia - but my favourite is between the two oldest Bennet girls. Jane Austen herself was very close with her elder sister and I love how although they're quite different they understand each other and are so loyal and loving. And how Lizzie teases Jane and Jane gently advises Elizabeth. They feel very real as sisters and I love their scenes together.

It's been a while since I've seen a proper good romantic comedy, that makes me laugh but also makes me feel something. There are three series of Lovesick currently on Netflix and although the humour might not be to some people's taste (it is, in fact, about a guy with an STI who has to contact all his previous partners and each episode focuses on a different relationship) but the writing is surprisingly warm and I love the central relationship between flatmates Dylan, Evie and Luke. The acting and chemistry between the three is believable and they've made me cry more than once. The friendship between Dylan and Luke is particularly nice as they never try to act all manly like they don't really care. And I like how Evie and Luke have a totally platonic (yet affectionate) relationship despite being opposite genders.

Lena, Bridget, Carmen and Tibby
(also Tibby and Bailey)
from The Sisterhood series by Ann Brashares 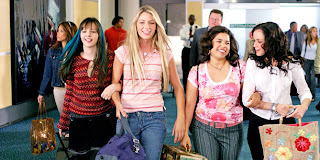 “Maybe, sometimes, it's easier to be mad at the people you trust because you know they'll always love you, no matter what.”

I always feel that there's a lack of female friendships depicted in the worlds of literature and film, but one of the most memorable is the relationship between the four girls from the Sisterhood of the Travelling Pants series. I like how they're all very different and they all have their own problems yet they're always there to listen when they're needed. I also love the unlikely friendship in the first book, between Tibby and Bailey, the occassionally annoying but perceptive little girl who is terminally ill. I love how Tibby learns from her and I always find their friendship really touching.

Arthur and Merlin
from BBC's Merlin

The BBC's Merlin is the programme (possibly other than Game of Thrones) that I've been the most invested in throughout my life - which was a big mistake, considering the way it ended. It was so crap I've not been able to watch it back since. But back to the point. The story-lines were usually completely ridiculous and repetitive, but what got me in so deep were the relationships between the characters. Particularly Arthur and Merlin - also Merlin and Gaius!

Matilda and Miss Honey
from Matilda by Roald Dahl 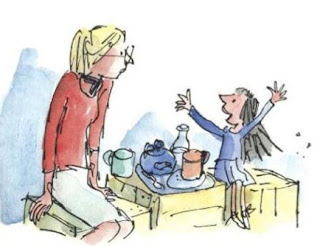 “Did you know", Matilda said suddenly, "that the heart of a mouse beats at the rate of six hundred and fifty times a second?"


"I did not," Miss Honey said smiling. "How absolutely fascinating. Where did you read that?"
"In a book from the library," Matilda said. "And that means it goes so fast that you can't even hear the separate beats. It must sound like a buzz."
"It must," Miss Honey said.”

There's a lot of love between Matilda and Miss Honey - they feel sorry for each other in their terrible family situations, but the thing that brings them together first is that they both admire each other. Matilda responds to Miss Honey as a kind, intelligent and curious grown-up - something she's never encountered before, other than in her books, while Miss Honey also admires Matilda's curiosity and genius, but also her daring, and her down-to-earth, unaffected character.

Julius and Burtier
from Remember the Titans 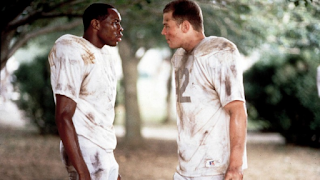 I still think Remember the Titans is one of the best films ever, despite knowing nothing about American football, and my favourite bits are those early scenes at camp where the white players and the black players are getting to know each other and go from a divided group to a close unit. I especially love the mutual respect and friendship that grows between team captain Gary Burtier and Julius, who points out a few home truths.

Frodo and Sam
from The Lord of the Rings by J.R.R Tolkien

The friendship between the Fellowship in general is lovely but Frodo and Sam are the most affecting I think. They balance each other out and Sam is just so warm and loyal while Frodo is quietly heroic. Sam might be the real hero of Lord of the Rings but Frodo is kind, and it's in his friendship with Sam that we see him at his most human.

Davos and Shireen
from Game of Thrones/A song of Ice and Fire series by George R.R Martin

There are lots of great friendships in Game of Thrones but my favourite is the one between Davos - ageing ex-smuggler from the slums of fleabottom, and the sheltered Princess Shireen, daughter of his king. I love how she teaches him to read and how he looks out for her and cares about her. There's a great warmth and naturalness between the actors on screen, their relationship is just so lovely.

Strike and Robin
from The Cormoran Strike Mysteries

“She's just tried to bloody knife me, Robin!""Well, she didn't manage it, did she?" commented Robin, busy with the kettle."Ineptitude," said Strike incredulously, "is no defence under the law!”

I was trying to think of a male/female friendship, and I think my favourite at the moment is J.K Rowling's detective Cormoran Strike and his assistant Robin. Yes, there's something more romantic underlying their relationship but it's their friendship that I love - how they're gradually becoming closer, learning more about each other and trusting each other. My favourite scene together is still that one in the pub though.

Thornton and Higgins
from North and South by Margaret Gaskell

Thornton and Margaret are one of my favourite couples in literature, but, in the TV series especially, it's the relationship between the mill owner and rebellious union-man Higgins that make for a lot of my favourite scenes. I like how it's Margaret who is the means of bringing them together, and how the two men eventually recognise each other's brains and common sense - and manage to low-key banter a bit too - across the class barrier of master and worker.

Gordy, Chris, Teddy and Vern
from Stand by Me

I've only seen Stand by Me once, but I thought it was funny and bittersweet, and the thing that stuck with me most was the depiction of friendship between teenage boys. Obviously I've never been a teenage boy myself, but the relationships feels genuine, although surprising sincere and tender, particularly between the two closest, Gordie (the main one) and Chris (the diamond-in-the-rough one, played by River Phoenix.)

Jules and George
from My Best Friend's Wedding

I'm not the biggest fan of this film, but I love all the scenes with Julia Roberts' character and her gay friend George, played by Rupert Everett. He makes the film for me, and let's be honest, he's the real friend here, not the tool of the title. I love the very ending and this scene (above) in the restaurant, where he's pretending to be her fiancee.

What are your favourite fictional friendships?