About a Boy: Book vs Film Review 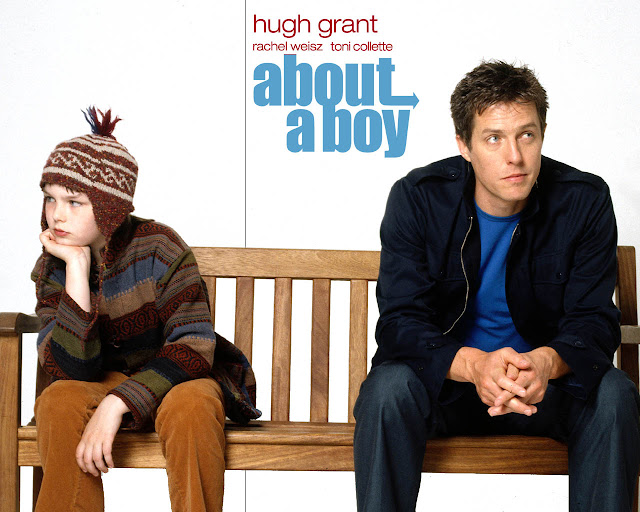 Watching the BAFTA's last night with half an eye, it was great to see Rachel Weisz and Nicholas Hoult present an award together, and a nice little throwback to About a Boy, which they starred in together when Hoult actually was a boy, as opposed to a man.  About a Boy is one of those films that's on TV a lot, and I feel like I know it back to front (although in fact, I very rarely catch it from the beginning.) I might even say it's one of my favourites, and recently I also re-read the book, so I suppose it's time for a comparison review. 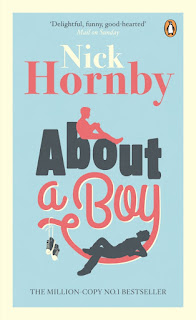 The book is written by Nick Hornby, author of High Fidelity, Fever Pitch and A Long Way Down - also of Funny Girl, which is a favourite of mine. I really need to look out some more of his stuff because I love the way he writes and he always makes me laugh. Although, going on the couple of his books that I've read so far, he also likes to drag out the endings. Still, I can cope with that. I think the slightly drawn out and ramble-y ending is the only thing wrong with About a Boy the novel - and actually it's also one of the only ways the book differs from the film.

About a Boy is the story of a man called Will who is pushing forty and lives off the money his Dad made from writing a Christmas hit. He meets Marcus, the boy of the title, through a single parent's group outing (a group which he joined, despite his childless state, as a ploy to meet women) and the eccentric eleven year old and his problems begin to change Will's worldview that 'every man is an island'.

(btw this is a terrible trailer...)

Although Nick Hornby is also a screenwriter (he adapted Fever Pitch himself and has had Oscar nods for Brooklyn and An Education) About a Boy was adapted from by Peter Hedges (What's Eating Gilbert Grape, The Good Dinosaur) and Directors Nick (Rogue One, The Golden Compass, Antz) and Paul (About a Boy TV series, Antz) Weitz. Like the book, the film is lots of fun and strikes a nice balance between humour and touching human moments and dilemmas. When reading the book I realised pretty much all the jokes from the film are straight out of the book and it's actually a very faithful adaptation - one of the only differences being that while the book is pretty much a fifty fifty split between Marcus and Will chapters, the film is a bit more Will focused. I suppose because Hugh Grant, who plays him, was the big name, and leaving an adult actor to carry the film is probably safer. Plus he does the voice-over which frames the film (and actually works, although I usually think voice-overs can be really annoying and cheesy.) Nicholas Hoult is brilliant too though, as Marcus. 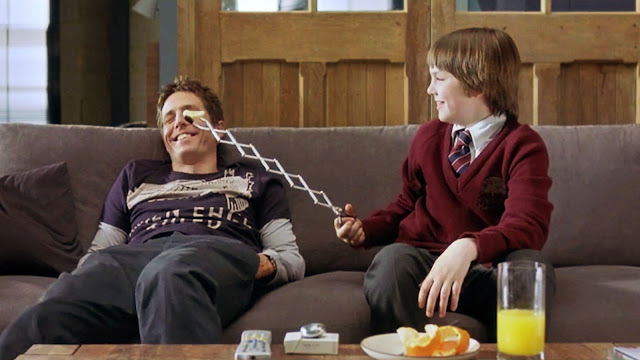 I think the casting is perfect actually. Will is a great character that falls somewhere between Hugh Grant's hapless Richard Curtis nice guys and Bridget Jones's Daniel Cleaver - he's by his own admission not complicated and shallow, but really he's a nice man and maybe a bit lonely. Hugh Grant makes you care about the character and he has great chemistry with Nicholas Hoult's Marcus - who I always still associate with About a Boy first and foremost. Hoult has got great comic timing and they really bounce off each other. Toni Collette is great and really versatile as usual as Marcus's depressive hippy mum and Rachel Weisz is lovely as the woman Will falls for. Also look out for a young Tonks from Harry Potter (Natalia Tena) as Marcus's friend Ellie. 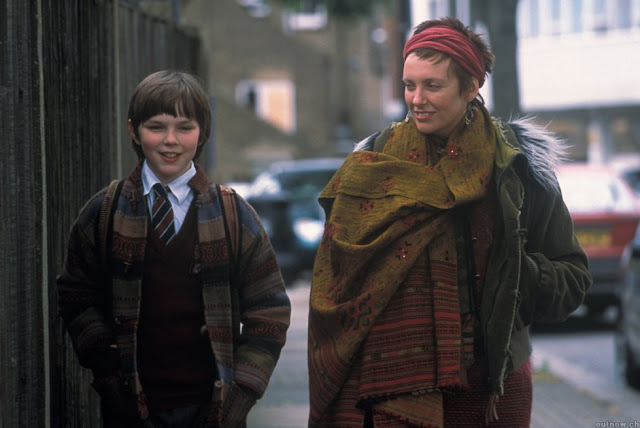 Ellie's Kurt Kobain story-line is where the film takes a different turn. The book is set in 1994 and the film made in 2002, so in the film Will gets Marcus into rap instead, and Marcus and Ellie's little adventure when Kurt Kobain dies, is replaced by that talent show scene. It's sad that Ellie gets less to do and I do like how the Kurt Kobain stuff fits into the book and teaches Marcus stuff about Ellie and also his relationship with his dad (his father has a slightly bigger role in the novel too) - however I've got to admit I prefer the film ending. It took me a long time before I could watch that talent show scene without running out of the room or hiding behind a cushion because of the embarrassment. But now I love it - and again I think Hugh Grant and Nicholas Hoult really sell it.

So overall, About a Boy is a really funny, and kind of heartfelt book, and a fast, enjoyable read. The film is a great, faithful adaptation with a just a couple of tweaks to bring it into the 2000's. Both are really a lot of fun, and (although having only seen the pilot) I think the more recent TV series looks like it's pretty decent too. Will have to catch up on it at some point!

Have you seen About a Boy? Anyone know if the TV series is any good?