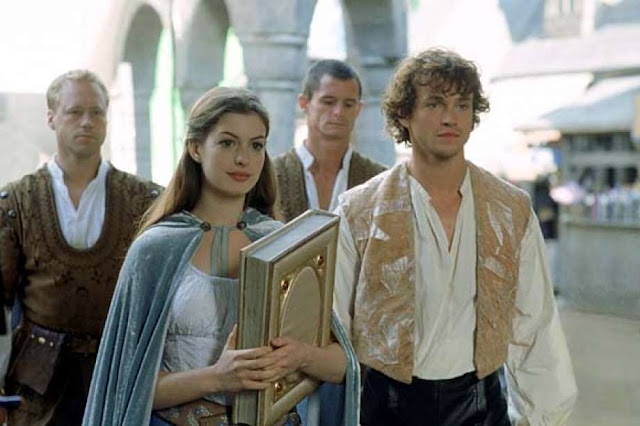 So, I've just finished Ella Enchanted, Gail Carson Levine's acclaimed retelling of Cinderella for teen readers. I've been in a bit of a reading slump lately and so have resorted to some young fantasy to recapture my enthusiasm (Howl's Moving Castle review, also coming soon!) Anyway, it's working. I loved Ella Enchanted! Still, I'm going to start with a disclaimer. I like the film too. Don't kill me. I gather it's universally hated by fans of the book, and now I understand why. I expect they feel the same about the feel-good Anne Hathaway cheese-fest  as I did when the Disney Channel massacred Meg Cabot's Avalon High. However, you can't deny that Ella Enchanted, the film, is lots of fun and although I concede that the book is superior in quality, the film makes me much too happy to dislike it. I also think that they're different enough to view as two separate entities.

Levine's Ella Enchanted is the story of a young noble girl living in a fairy-tale kingdom, who is cursed from birth by a socio-pathic fairy who bestows on her the 'gift' of obedience. It follows the basics of the  Cinderella story loosely, but the obedience thing is a great concept, allowing Ella to have a  rebellious nature and not making us think 'why doesn't she stand up for herself?' In fairness, I'm not usually in the camp that says Cinderella is a pushover - because what else could you do really in her situation? -  but it's nice to see her with a bit more fight. I really liked Ella. I thought she was fun and nice but not too good to be true. I liked the way she dealt with the curse (e.g when Hattie asks her to kneel and remove her shoes for her, so she takes them and throws them out of the window. Or she asks her to pick up a dust ball from the floor, so she crushes it in Hattie's face.) She never just gave in to make it easier on herself, she always kept fighting.  I also liked that she came across as the age she was supposed to be (fifteen) rather than precocious or wise beyond her years. And without being a brat. Yes, she had a genius for languages and some kind of magical ability to charm ogres that was never properly explained. And she was pretty and confident and funny. But she still managed to be an every-girl despite that.

“It is helpful to know the proper way to behave, so one can decide whether or not to be proper.” 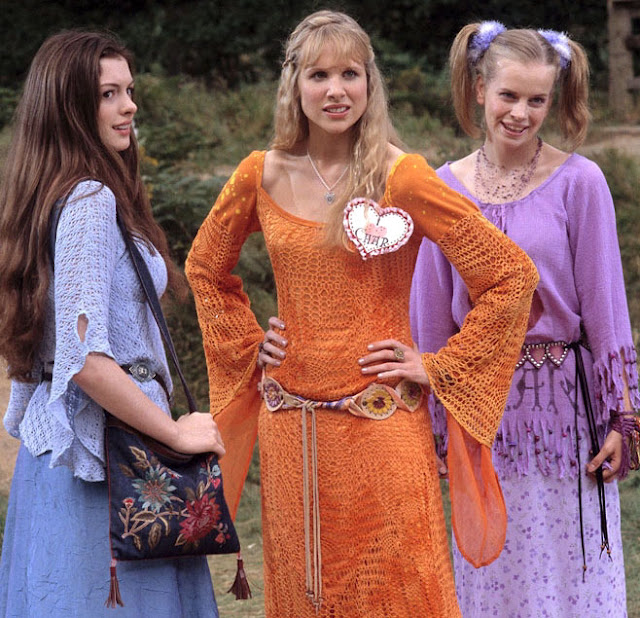 What I liked best about Ella though, was her relationship with Char - or should I say Prince Charmont. I loved how natural they were together and how the love grew out of friendship. I love how he never makes a secret of how much he likes her and she attracts him because she makes him laugh. It's a while since I've really fallen for a fictional couple, but Char and Ella were so lovely together. And that letter. I mean, he's no Captain Wentworth, but my heart-rate definitely sped up a bit there .

Ella and Char in the film are a bit different, and not just because they're older. I thought Hugh Dancy was great casting, and Anne Hathaway was really likeable at that stage of her career (before she started attempting hideous English accents). She was great in the role, but 'film' Ella is more serious. She's a bit of a political crusader, fighting for the rights of magical creatures like the elves and the giants (who, in the film, are seriously oppressed) and I like her feisty-ness and sarcasm. Both Ellas are good, just different. But I think I prefer 'book' Ella ever so slightly. In the film there's more tension between the lovers too, as although Char is essentially the same character, but because his circumstances are different, he's a bit spoilt. 'Film' Char has an evil, manipulative uncle, a dissatisfied populace whose suffering he's oblivious to, and an adoring fan club, whereas Book Char has a nice family and seems to be dealing with his responsibilities well. Book Ella only has to sort her own issues out before she can live happily ever after, whereas film Ella also has to contend with Kingdom drama. 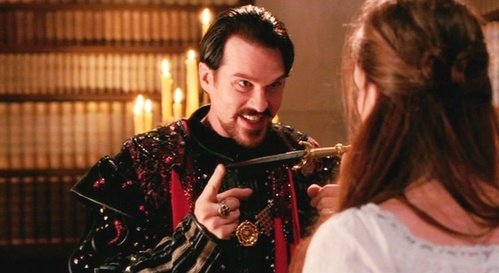 I did actually find it a bit odd how, in the book, the fairy-tale creatures did seem like they were treated as second class citizens, despite having human intelligence (the gnomes were even in some kind of zoo thing?) yet this didn't seem like much of a big deal. Ella always treated them well and made the effort to learn their languages, but otherwise their whole situation was kind of brushed over. Maybe that's why the screenwriters (a team of five women by the way, including Karen McCullah and Kirsten Smith, who also teamed up on Legally Blonde, 10 Things I Hate About You and She's the Man) ran more with the oppressed creatures idea in the film?

So yeah, despite some basically similarities, the film is pretty different. At first I thought they were going to very similar, but Ella's first meeting with the elves (including Slannen) cured me of that notion. I couldn't help laughing as I read the elf stuff (some traders giving Ella directions and appreciating that she appreciates their craftsmanship) and comparing it to the adjacent scene in the film (elves bursting out in song when Ella sneaks into their village, as they're forced by law to sing and dance and be entertainers.) I just kept imagining the looks on people's faces if they'd read the book first. Got to say, I enjoyed Carey Elwes as Evil King Edgar and Slannen, the elf/aspiring lawyer, makes me laugh. But it's the bits from the book, particularly the Ella and Char stuff, that has the most weight. Although 'weighty' is a word I doubt will ever be used to describe Ella Enchanted.


My favourite thing about the film (other than Hugh Dancy) is the weird Christmas panto/juke-box musical style they've got going on. I love the scene where Ella sings Somebody to Love at the giant's wedding, and the final 'curtain call' bit where they all sing and dance to Don't go breaking my heart. Oh that's another thing not in the book - Benny the magic book, who is the fairy godmother's boyfriend?? Said fairy godmother is, by the way, much older in the book and generally less like Minnie Driver. And Ella's Aorthian best friend (played by Bend it Like Beckham's Parminder Nagra in the film) gets more to do in the book, as I suspected she must do.

Overall, I would honestly recommend both book and film. Yes. No judgement please. Both book and film are fun and feminist yet unashamedly girly too, which is my favourite combination. I love the film because it's cheesy and hilarious (although not always intentionally) I like the songs, the dancing and the two leads have a lot of chemistry. I'd recommend the book, especially to teen and tween girls, as it's a good, fast read with a strong, fun heroine and a sweet central love-story. Sometimes the plot points seemed a bit manufactured and I did cringe at some of the fairy-tale stuff on occasion, but overall I think it was really well done. I'm sad I came to the book so late but I'm glad I discovered it at last. If you haven't yet you should look it out.

So which camp do you fall in? Love the film or hate it? Read the book or never heard of it? Or like me, maybe you like both?