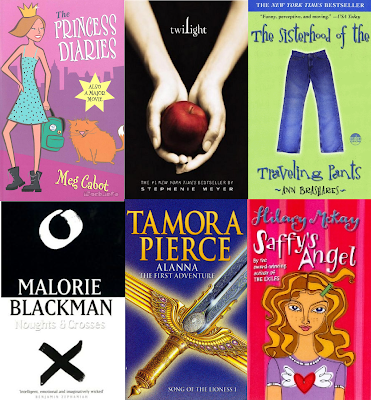 This week's TTT, over at The Broke and the Bookish, is an opportunity to get nostalgic, and now that I'm getting old enough to actually look back at my teenage years with nostalgia (although I still think in school years rather than actual years - happy September by the way!) I thought I'd recap on some of the book series that I devoured back then. Obviously Harry Potter was a big part of my childhood and my teens (and my present to be honest) but I'm going to focus on books that feel more specific to the teen years - the kind of books that make you remember how it felt to be at school and shock you with the realisation that you're not that person anymore. There're some younger books on here too - I did re-read a lot.

When I first started reading about Mia Thermopolis there were only three books in the series - and they were probably too old for me so a lot of the stuff went over my head. But as I read and re-read the rest over the years, Mia's problems resonated more. I loved Mia and she frustrated me, but I empathised. And I was kind of annoyed when her boobs came in since mine never did. I always finished a new Princess Diaries in one sitting and I always laughed out loud. A lot. I don't laugh so much now and I want to shake Mia - but I get more of the cultural references. (Book vs film review here) 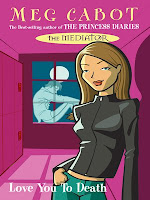 Not as funny as Princess Diaries and I never did like Suze much, but there are whole lot of reasons why I loved Meg Cabot's series about the teenage girl who can speak to the dead and shares her room with the ghost of a Hispanic rancher. Firstly, Jesse was wonderful (unpopular opinion but I wasn't a Michael fan) and Paul was a great villain. I loved the concept and I loved Suze's mentor, Father Dominic (also her head teacher and a Catholic priest.) Being raised Catholic, it was great to see Catholic characters depicted who weren't totally bonkers or evil for a change.

For all Twilight's flaws, the series was a good read. Well, Breaking Dawn not so much, but the first three, definitely. Something about the books captured the imagination of thousands of teenage girls (and their mothers) and they were exciting, you know? The finales were always good, Edward and Jacob were swoon-worthy, if flawed, and Bella, for all I wanted to shake her sometimes, was relate able. Especially in the first book, before she lost her sense of humour. (Book vs film series review here)

Mel Beeby is killed by a joyrider on her thirteenth birthday and finds herself at Angel school. It's a big surprise to the girl dubbed an 'airhead with attitude' by her teachers back on earth, but when she signs up to her school history club, she finds her real purpose in death - as a guardian angel. This means travelling to earth on 'missions' to guide kids from different historical eras and protect them from succumbing to the 'opposition' or 'P.O.D.s' aka the hell dwellers who try to make life difficult for humans. Mel and co. mix with gladiators in ancient Rome, silent movie stars in the 20's and a teenage Shakespeare. It's all a bit bizarre but these books were right up my street as a thirteen year old. They're kind of like a girly Doctor Who - with angels instead of aliens.

Noughts and Crosses is the first in a series of novels about the romance between Sephy (a black 'cross') and Callum (a white 'nought') and how it effects their lives in a segregated society where the noughts are seen as second class citizens. These dark young adult novels are pretty harrowing and none of the characters are particularly likeable. But they're so good. I kind of wish the author had stopped after the fist book though - it's the best, and Knife Edge in particular is just so relentlessly grim.

These are children's books really, but like Harry Potter, I read and re-read them throughout my teens and they make think of being that age. Chrestomanci is a nine-lived enchanter who polices the use of magic in the twelve related worlds in which the stories are set (the main one is pretty much like the wizarding world in HP) and who comes in and out of the stories. My favourite is The Lives of Christopher Chant, but they're all good. Well written, original plots with great characters - perfect for Harry Potter fans and definitely one of J.K Rowling's inspirations I'd say.


The Song of the Lioness Quartet

I got Alanna: The First Adventure out of the library in year 7, enticed by the Mulan-like premise of a tomboyish girl who swaps places with her twin brother so she can train to be a knight. However, I realised these books were something more when the 11 year old Alanna got her first period, mid-way through book one. As the stories progressed I continued to be surprised by the plot-lines, including one thread where a good friend turned out to be a bit controlling and unpleasant as a boyfriend. I loved these books for the swords and sorcery (and the cat) but also because they were different from what I was used to, and the characters were unpredictable and complicated. I've not read them since but I'd like to - there also seemed to be a lot of bed-hopping for a kids book, and I wonder if I'm remembering that right?

I came to  these books in my mid-teens and at first I felt I was probably too old to be the intended audience - but later I wasn't so sure. On the surface these were a set of fun mystery novels where kids from ancient Rome (a rich girl, a slave, a mute beggar and a Jewish boy) solve crimes such as who has been murdering the local dogs. However, they were really dark in places (one of the secondary characters turned out to be a paedophile, no word of a lie) and had some mature themes and complex characters. It's a long series, so the individual novels were a bit hit and miss, but when they were good, they were really good. Easy reading, exciting plots, unexpected character arcs and some really interesting stuff about ancient Rome.

The Sisterhood of the Travelling Pants

As a teenager your hormones are so over the place that you feel every little thing so much more - and if you want a book that captures that feeling of aching sadness and heightened emotion, you've got to read the Sisterhood series. Tibby, Lena, Bridget and Carmen are well drawn, flawed but likeable characters and you're pulled along through the things they're dealing with in their lives. I like that although boy troubles are in there, it's not all about that. More often than not it's family drama. I cried through all of these books, not because they're depressing (apart from book 5, I usually discount that one) but because they're just so emotional. Why, I don't quite know. It's something to do with the writing. (Book vs film review here)

Another one that made me weep occasionally, but also laugh a lot. The Cassons are an unconventional family from the North of England (woop!) with names taken from the painter's colour chart (the mum is an artist). What I love about them is that although they're a bit quirky and eccentric, they feel very real and the author doesn't shirk from dealing with difficult topics, but never in a way that make you feel depressed reading the books - they're still light hearted and fun. And they were actually my era so the cultural references felt relevant to me (Harry Potter, Doctor Who, Richard Attenborough etc.) unlike often in the Princess Diaries.


Got a Top Ten Tuesday this week? What are some of your favourite teen series?