Over the last few weeks me (and my mum) have re-watched our way through six series of Game of Thrones, and I honestly don't know how we're going to wait until July for the new episodes. There are so many little things you pick up on a second watch, and the costumes have made a bigger impression on me this time around. If you haven't looked at Michele Carragher's website you should definitely check it out: she does the embroidery for GOT as well as some other shows and films and the woman is a genius. I've previously done costume posts on the Starks, Tyrells, and Daenerys and now it's the turn of the Lannisters...

Cersei is the first that springs to mind. It's odd that I've never thought too much about her clothes, but I've started to notice them more now that her wardrobe is going through some dramatic changes. In series one, Cersei was still very much 'the queen'. Technically she's still Cersei Baratheon, but we haven't thought about her like that for a long time. I always think of red as her signature colour, but in the early series she wore a lot of Baratheon brown, and the stag as well as Lannister lion, often featured in her clothing. (See the crown, below.) The first season was also the only time we saw her in anything approximating winter clothing, as she spent some time up North. 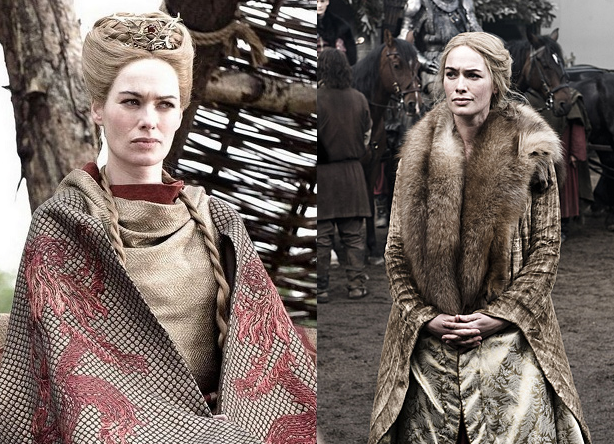 In the early seasons I notice she also had a much softer look - it's been getting gradually more militaristic. It's hard to imagine her in these soft blues and pinks now. The blue dress, below, is worn when she's watching her daughter Myrcella sail away to Doorne - one of the rare times we see the more vulnerable, feminine side to her. 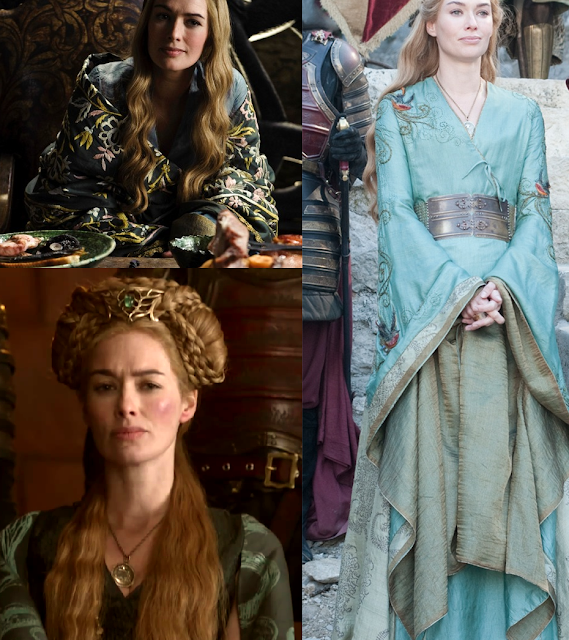 Before Robert dies, and while Ned is still the focus of Game of Thrones Cersei's depiction is slightly different, I think. And this is reflected in her clothes. In later series' she's always the fierce, scheming queen-mother, but in series one she's still a contemporary of Ned - his best friend's beautiful queen. In the scene where Ned (idiotically) meets with Cersei privately to tell her his plans to expose her bastard children (and so give her and them, time to flee) she's dressed in soft pink, with soft hair, very feminine. Ned knows she's not nice, but depicted like this it's easier to comprehend how sees her - as a woman and a mother first -  and why he trusts she will run to save her children rather than stay and fight for power. 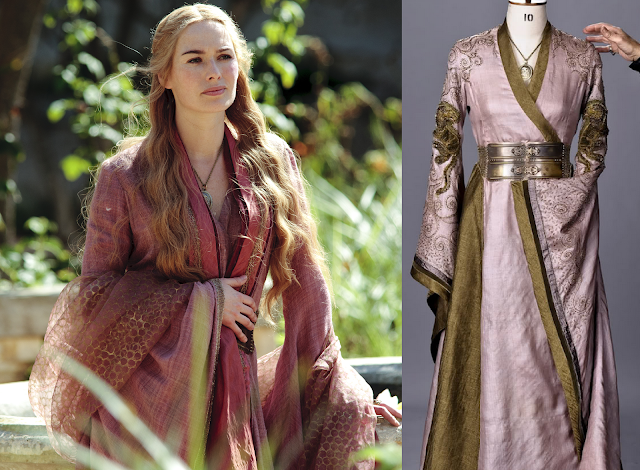 The below pictures are more the kind of thing I associate with Cersei. Bold, un-ashamed Lannister red, sharp lines in her jewelry and necklines, and metallic armour-like belts and corsets. The Seven Kingdoms are now at war, and Cersei's clothing reflects this in subtle ways. 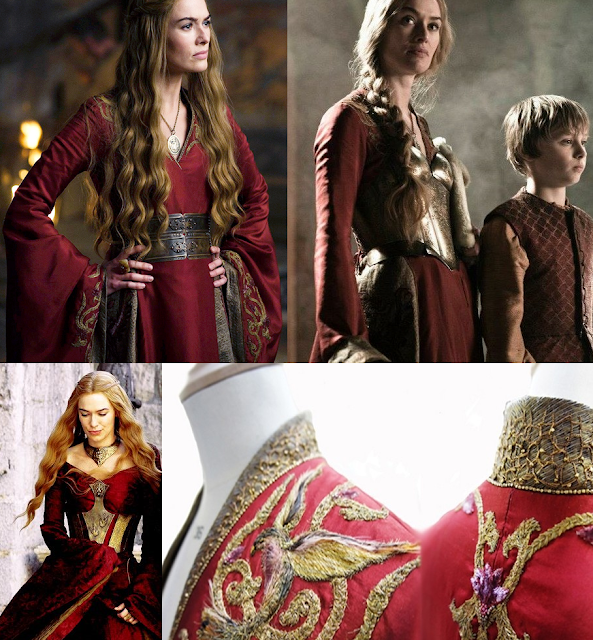 Of course, she still gets plenty of that gorgeous Michelle Carragher hand-embroidery. Extravagant, intricate and lots of lion imagery! 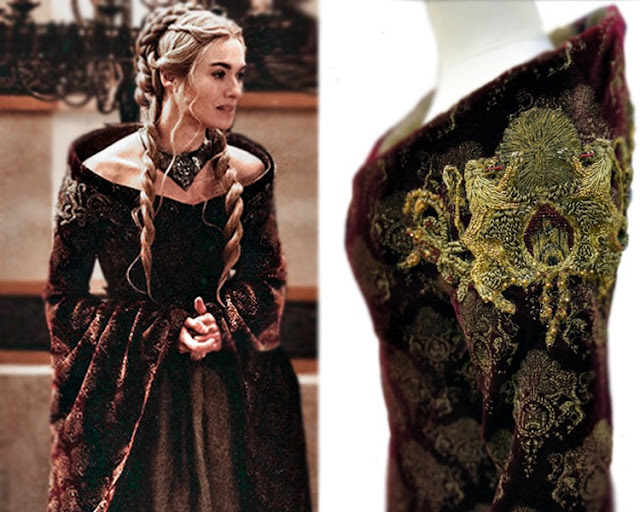 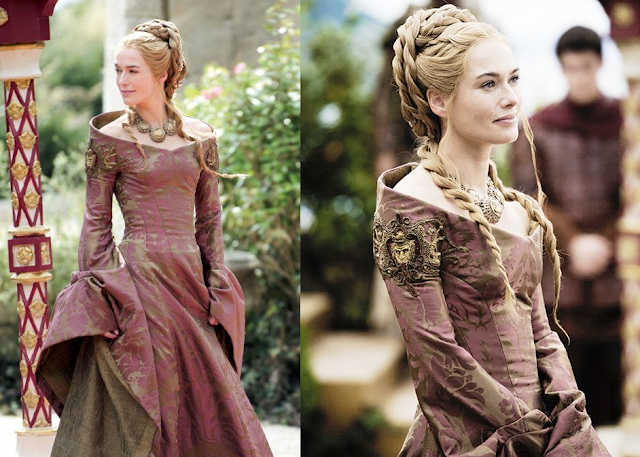 Although red is her power colour, lately Cersei has spent most of her time in black (people will keep dying.) Her gowns have lost none of her fierceness though, and with her new short hair she can pull it off especially well. 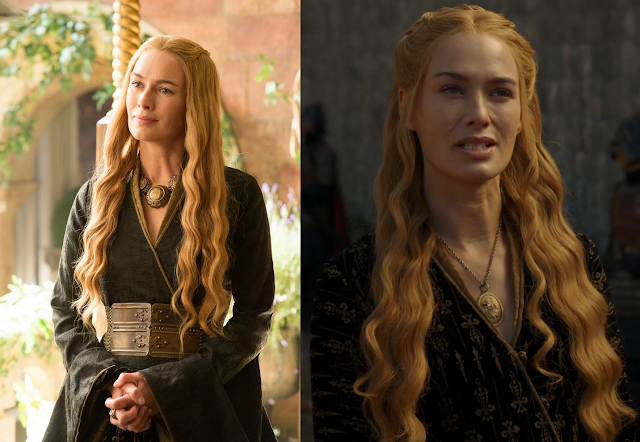 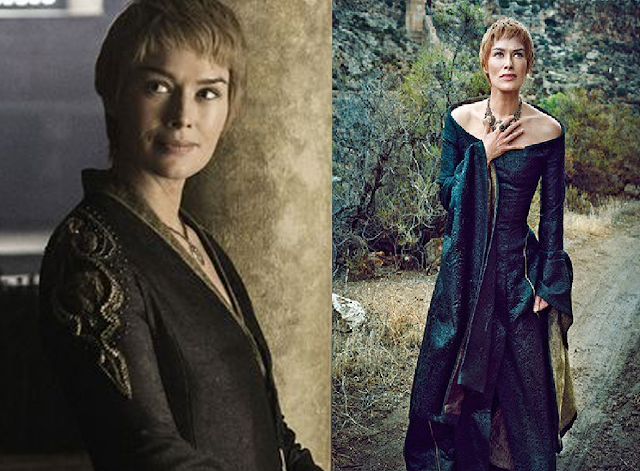 At the end of the most recent season she's got no kids left and nothing left to lose. Power is the only thing she's fighting for now (I can't believe she cares as much about Jaime as she'd have us think) and she's ready to fight for the throne. Her newest look is very warlike, with the armour padded shoulders and bold black dress. She's looking great as ever, but very different from the Cersei of series one.

Out of all the costumes in Game of Thrones - and some of them are truly gorgeous - I think my favourites are worn by Cersei's daughter Myrcella. Because she's been sent away to Dorne, which has a much hotter climate and a less uptight way of life, her costumes are very different from those worn elsewhere in Westeros. Perhaps closer to those worn across the Narrow Sea, but more elaborate and sumptuous than anything we've seen Daenerys or her people wear.
﻿ 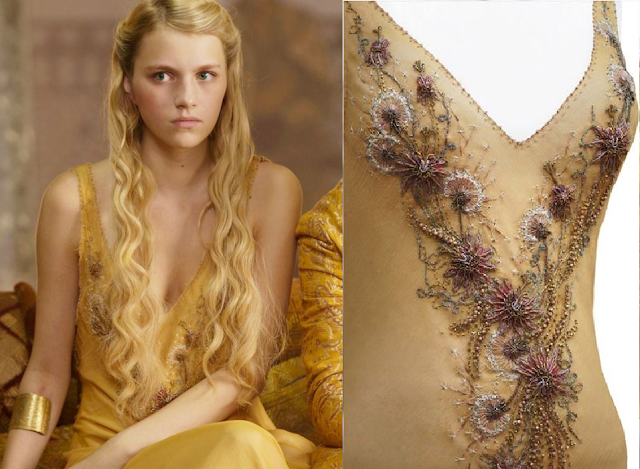 The Dornish seem to wear a lot of yellow and gold, but Myrcella is also seen a lot in pink. She has a very floaty, feminine, fairytale princess sort of look, to match her flowing blonde locks. Yet the plunging necklines and bare arms also indicate a teenage rebellious streak, and that she's embracing her life in Dorne. 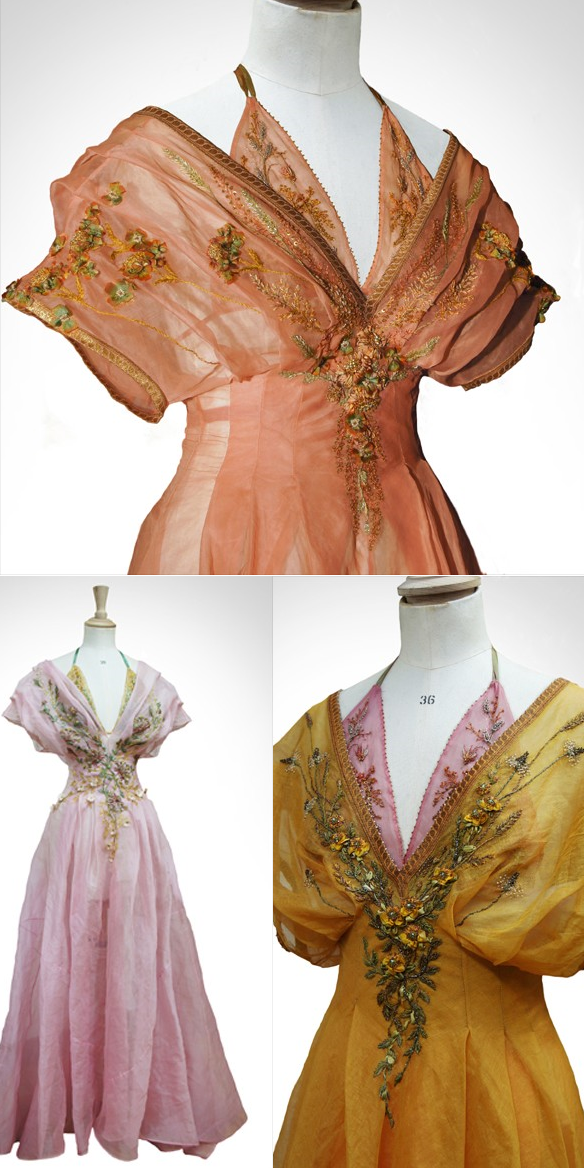 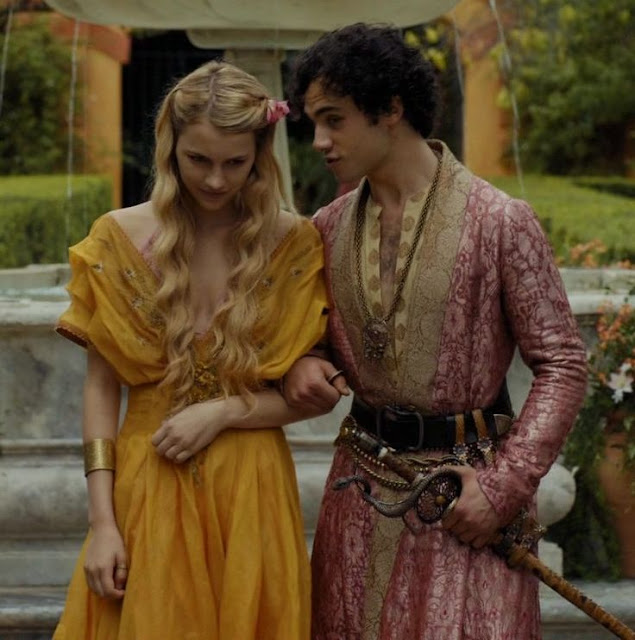 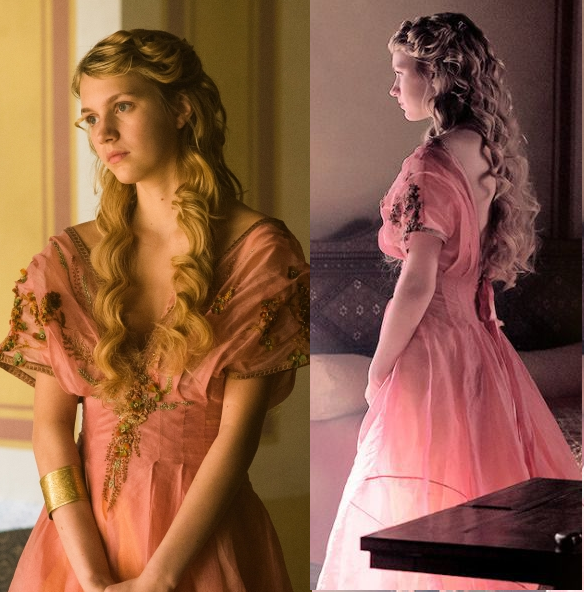 I'm always less interested talking about boy's clothes, but I'll spare a moment for the Lannister men. Unlike Myrcella, Cersei's eldest, the sadistic King Joffrey, always dressed as you'd expect a prince/boy king of Westeros to dress. Very elaborate, almost feminine, similar to the way you'd expect the 'Princes in the tower' to be dressed in a Shakespeare play. He always wore Lannister red (although he's technically Baratheon, as indicated by the stag crown) or princely gold, and his clothes were as gorgeous as his nature was ugly. 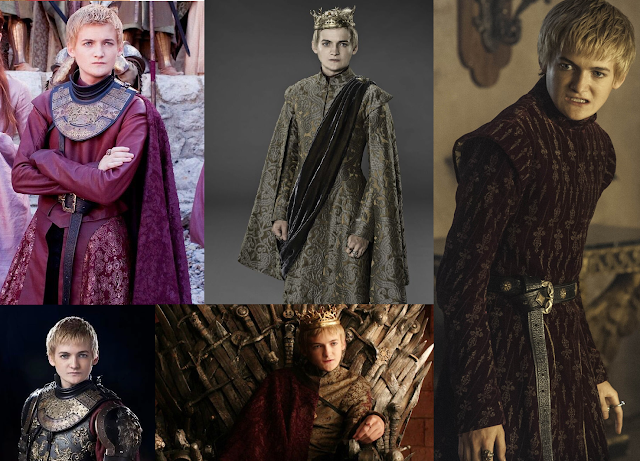 His little brother Tommen (poor thing) dressed in a similar style, yet his clothes were simpler and less showy. He also wore mostly gold, rather than red. Less blood on his hands? Or just more of a blank slate, less obviously a Lannister?

Tyrion's another one who's gone through a bit of a wardrobe transformation. When we first see him, we're up North, so lots of capes and leather. As a Lannister, and therefore very rich, he always looks expensively dressed, and usually wears red/burgundy and gold, even when in armour. 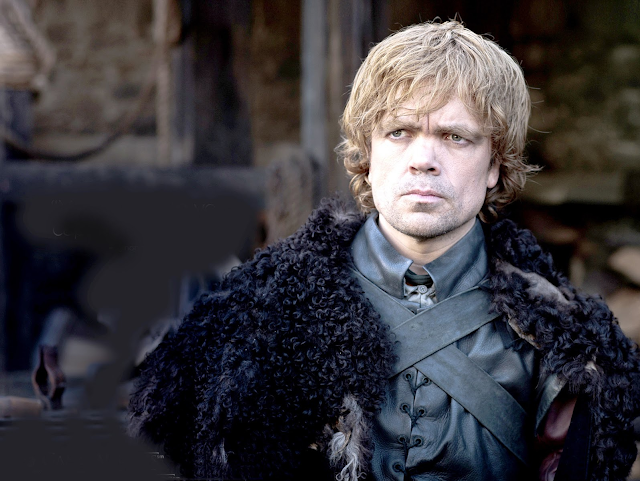 His clothing becomes a bit more business-like once he is made hand of the king, and is no longer just a  Lannister of leisure. He spends a time looking scruffy and piratical in a jail cell, and later trades in his Westerosi attire for cooler baggy shirts and gold/hot weather colours in Essos. 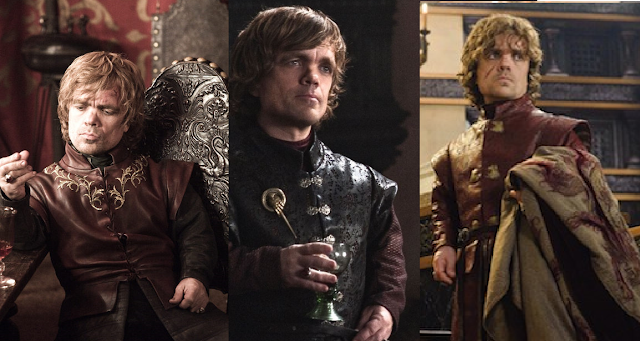 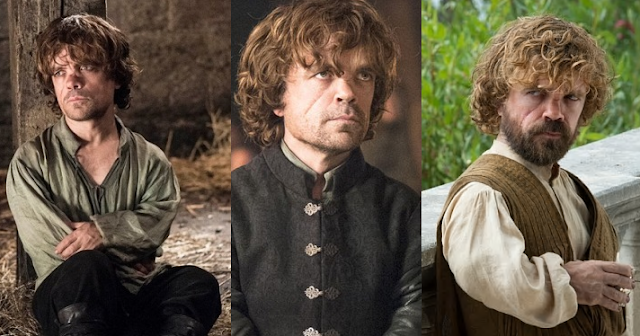 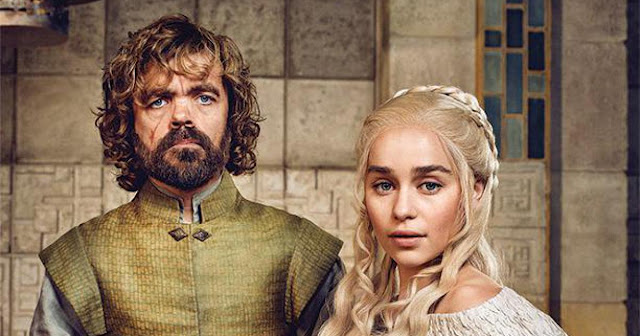 However, now that Jaime has hung up his gold cloak and traded in his Kings-guard armour for something more traditionally Lannister, someone's still flying the flag for the family. Tywin would be proud. 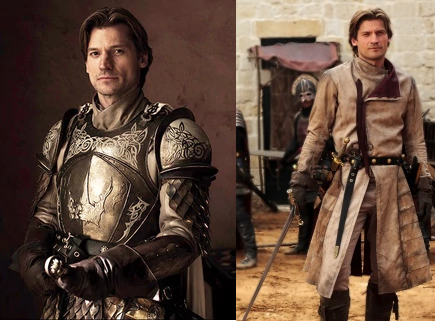 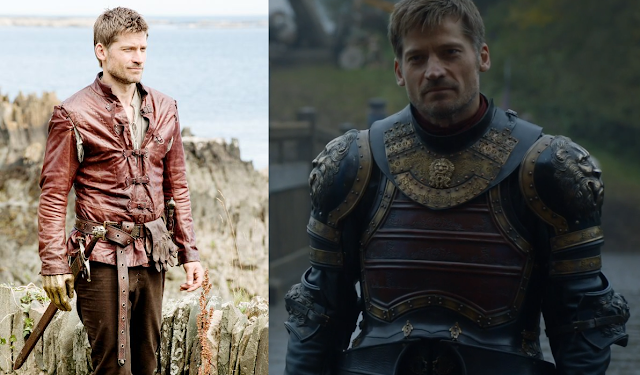 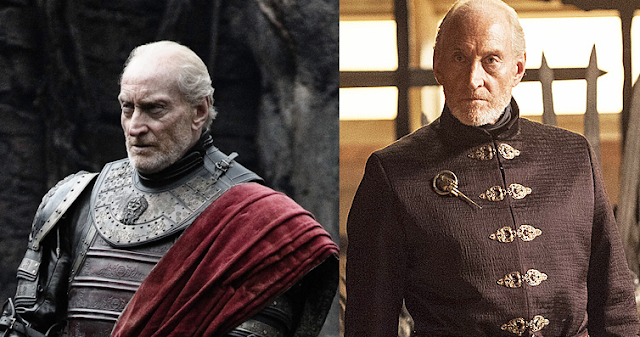 Who do you think is the best dressed in Game of Thrones? Any other ideas for a costume post?