Costume Stuff 10# The Theory of Everything 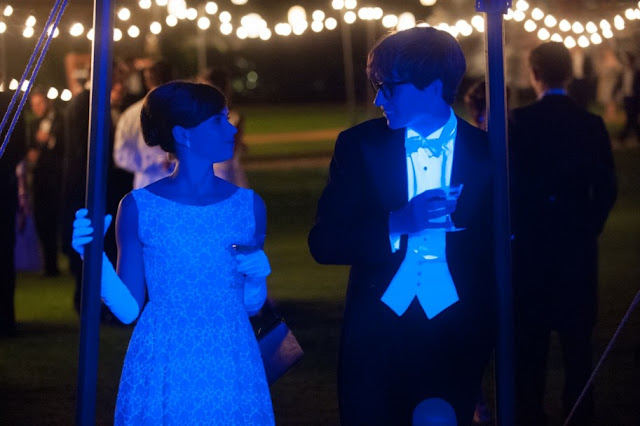 It's been a while since I did a costume post, but I recently re-watched the Stephen Hawking biopic The Theory of Everything, and some of Felicity Jones' clothes are so lovely in it, that I felt the need to discuss them on here. The Theory of Everything was based on Jane Hawking's book, about life with her now ex-husband, Stephen. A renowned physicist  who has produced some of the most important scientific research of the century, all while living with a debilitating and life-threatening illness, Stephen Hawking is perhaps most famous for coming up with what we now call 'the big bang theory.'
Set in the early 1960's and running up until the present, the film begins when Stephen meets Jane - an arts student and CofE church-goer - while embarking on his PHD at Cambridge university. He's a cosmologist and an atheist but their differences do nothing to cool the immediate chemistry between the couple, and the film follows their ensuing romance and the problems that arise after Stephen is told he has just two years to live. I liked The Theory of Everything a lot. The leads were both great and all the Oscar nominations were well deserved  - but it's kind of down-beat and if I'm honest the costumes were one of my favourite things about it.
﻿
﻿ 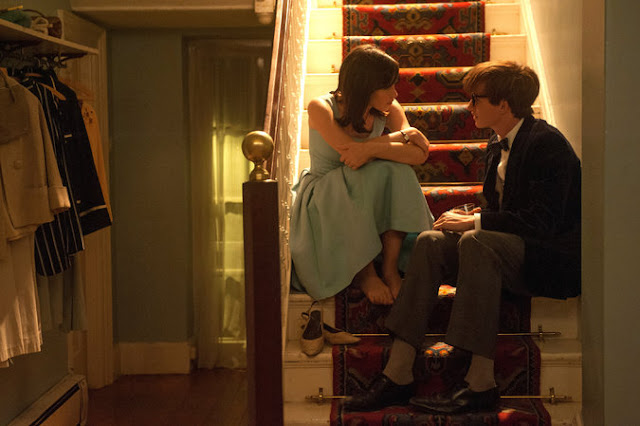 One of the things I loved about the clothes, was that they're in a different style from the kind of thing you'd normally see in a 60's-set drama. We're used to seeing the ground-breaking new silhouettes of the time, the mini-skirts, long boots etc., and I do love that style. But because the character of Jane is quite demure and a bit old-fashioned (a middle-class, religious, medieval-poetry-studying sort of girl, rather than a sex-drugs and rock' n' roll type) her look is a little different. At the beginning the skirts are still long and the silhouettes a bit more fifties. It's a very pretty look, and she wears a lot of pastel colours, particularly pale blue. 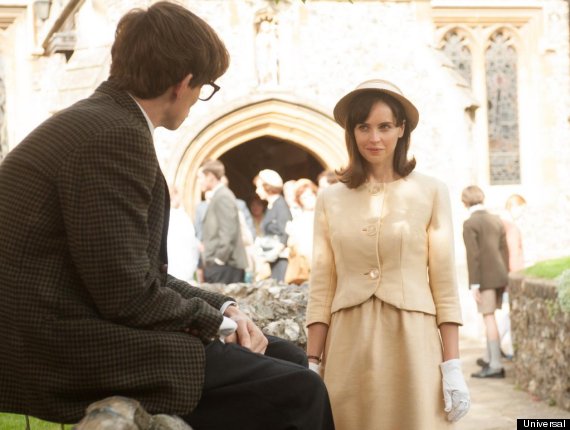 I love the way that women in this era still wore gloves for church and special occasions. There's something very elegant about gloves, although I can imagine trying to find a matching pair would get annoying. My socks are always odd so I don't know how I'd cope.
﻿ 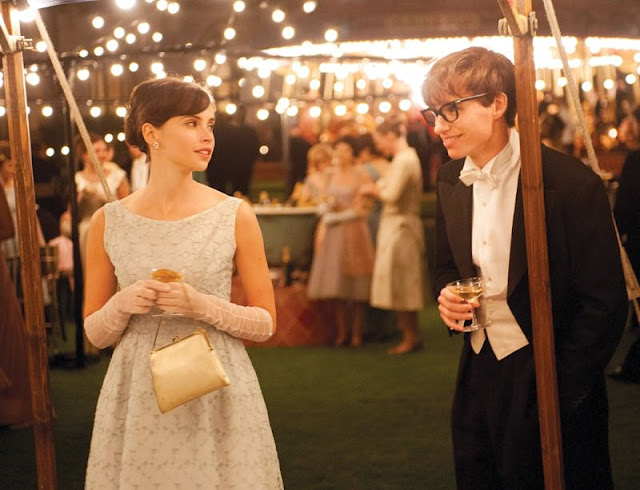 The above dress is Jane's outfit for the university ball. It looks white in the picture, but is actually a very pale blue. In the ball scene Stephen and Jane have a conversation about the UV light, and the reasons why the men's shirts glow brighter than the women's dresses beneath it. That's another thing about sixties clothes - the men always look so smart, often in their shirts and ties even for casual wear. 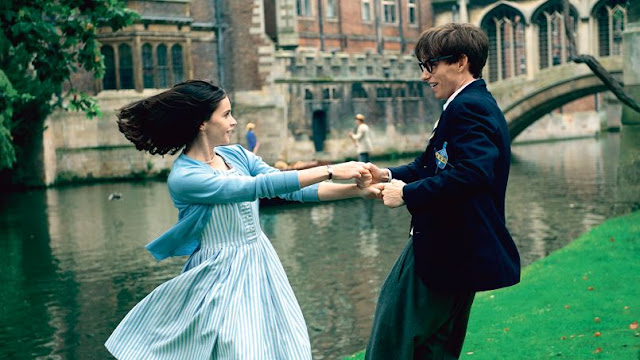 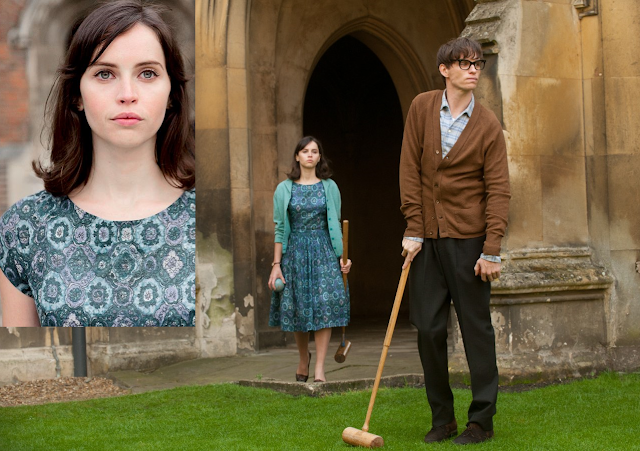 I liked the below look as it stood out to me as more classically sixties in style - but it's the beginning of the end for Jane's style, as we roll into sadder times for Jane and Stephen and the horrible fashions of the seventies and eighties creep up on her. 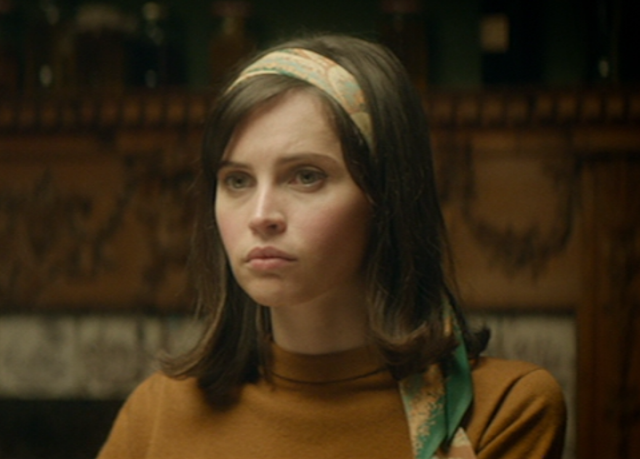 However, it's not all sad times from this point, as Jane and Stephen get married, have kids and live a happy family life to the best of their ability. For a while. The below picture shows the difference between Jane's real wedding dress and the costume designer's take. It's good to be reminded, I think that a lot of the costumes we see in period dramas/historical films include an element of modern tastes incorporated into the clothes. If you watch Jane Austen adaptations from different decades for example, I reckon you can usually see the influences of the current time period. 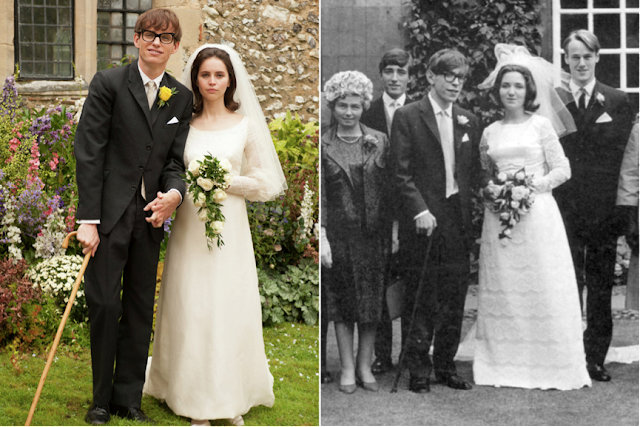 After the wedding we're into the horrible seventies, and so they try to age Jane up a lot. She wears some horrible clothes. There's the occasional pretty, mum-sy sort of dress (see below) but mainly I feel they're trying to make her look drab. I do like this nightie though (below.) It's sweet - and I love Eddie Redmayne's pyjamas. 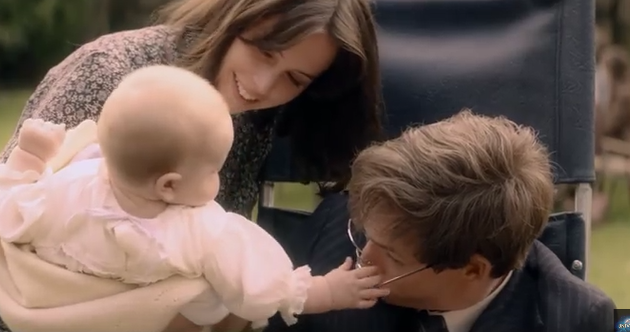 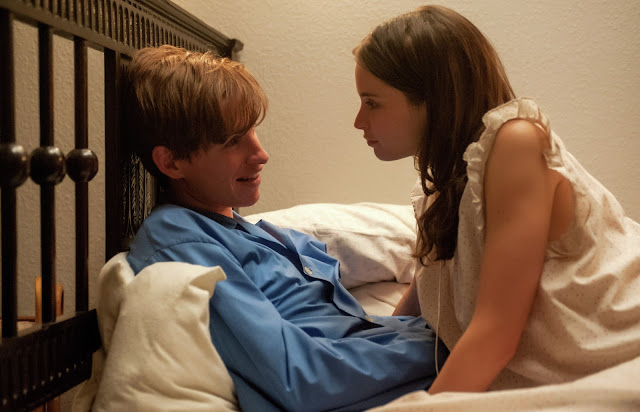 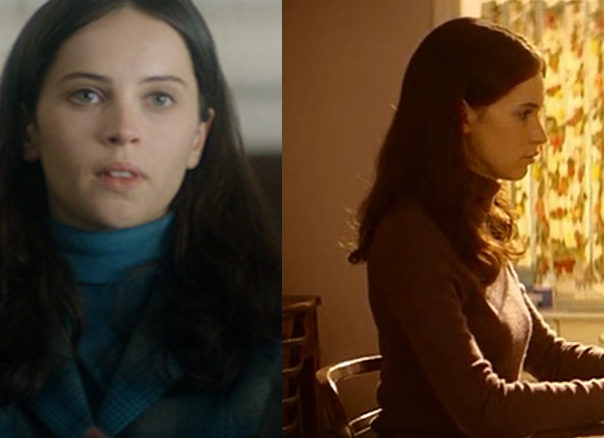 Although this was probably how Stephen Hawking's wife really dressed later in life, I can't help thinking the costume designers might have done her an injustice on some occasions. The dress she wore to meet the Queen in real life is much prettier, I think, than the one in the film. 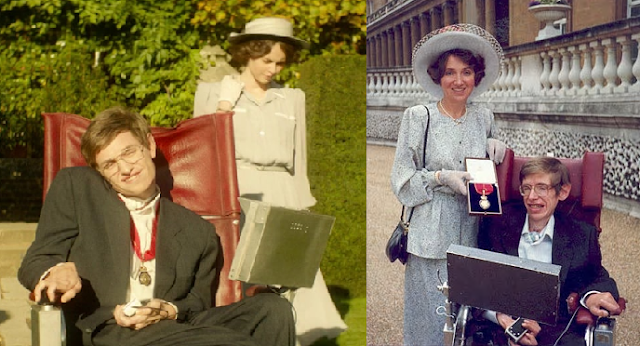 I'd definitely recommend Theory of Everything, for anyone looking for a romantic yet bittersweet film, that sensitively deals with illness and how it can effect people's lives (while not taking away from the fact that Stephen Hawking is clearly a brilliant and charismatic person, illness or no illness.) The costumes, in the first half particularly, are worth watching for alone.
﻿
Labels: 1960's biopics Costume Stuff Eddie Redmayne Felicity Jones period drama Stephen Hawking The Theory of Everything