Girl with a Pearl Earring: Book vs Film 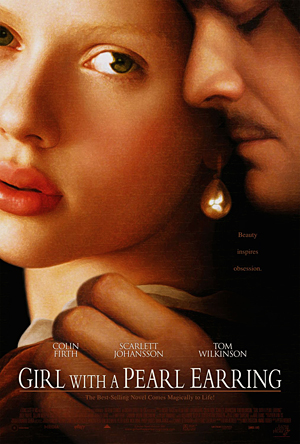 Not long ago I was looking for a book to fill a reading gap and picked up a copy of Girl with a Pearl Earring that had been kicking around the house. I'd read the novel when I was younger but I couldn't remember much about it, and as far as I could remember I hadn't particularly liked it. Maybe I just read it at the wrong age, because this time round I enjoyed it a lot. Girl with a Pearl Earring is Tracy Chevalier's fictional account of how the famous painting came to be. Set in Delft, Holland in the 17th Century, it tells the story of sixteen year old Griet, who goes to work as a maid in the service of painter, Johannes Vermeer, and his family. One of her duties is to clean his studio, and soon their relationship becomes something more than just master and maid.
﻿
﻿ 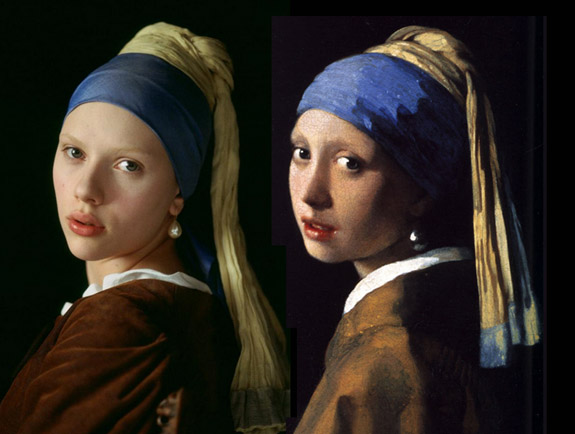 The book was engrossing and I found it very hard to put down. The setting and time period were well created, so that it almost didn't feel like historical fiction at all. I was completely drawn into Griet's world. The story is written in the first person, from Griet's perspective, and I liked her, I think. But I didn't always understand her and her motivations. It was the same with the other characters (Vermeer for instance -  did he fancy Griet? Was she his muse? Did he see her as a fellow artist who understood him? Did he love his wife? I have absolutely no idea) but you expect to understand a bit more when you're in a character's head. Maybe Griet didn't have her thoughts together herself, maybe that was it. Either way, sometimes she was a bit of an enigma. I understood the Pieter thing better this time (her relationship with the butcher's son) but still not entirely. Last time I read the book I didn't like Pieter, this time I did. But I still don't really know what Griet thought of him. 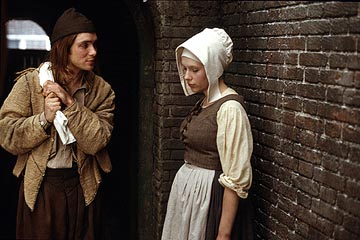 The characters may have been hard to read at times, but I don't think that was necessarily a bad thing. They were complex and interesting, if not always likeable. The character that brought out the strongest emotions, however, was Cornelia (one of Vermeer's daughters.) I despised that little brat. Although she's only a kid, I don't think I've hated a character so much in a long time. She was a very well-written villain, if you can call her that, and I hope to God I never have a child that turns out like her.

One thing I wasn't sure I liked about the novel, was the atmosphere. It wasn't a particularly happy story and it gave me a horrible sort of feeling in the pit of my stomach. I can't really explain it. On the DVD extras, someone describes the book as a 'domestic thriller' so maybe that was the reason it felt a little un-nerving. Although very little actually happened throughout, there was a lot of tension, like you were waiting for something bad to happen. And bad things did happen, although nothing too drastic. It wasn't really a 'light' book, but the atmosphere suited the story, and it was well created, if not always comfortable. 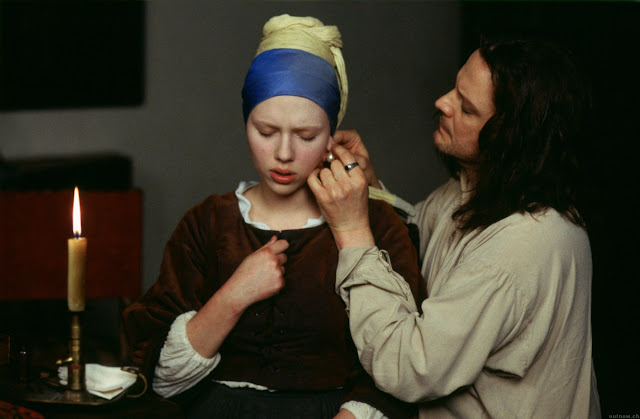 The film stars Scarlett Johansen as Griet, Colin Firth as Vermeer and Cillian Murphy (gorgeous even with that horrible long hair) as Pieter. It's very beautiful to look at, as they've done something fancy with the lighting that makes every shot look like a painting. I also think it was very well adapted from the book, and they've cut very little. The only major difference, as far as I can remember, was the loss of the side plots with Griet's sister and brother.  The thing with her sister was too sad anyway, I was quite glad they left it out. Cast wise, Scarlett Johansen might not look that much like the girl in the picture (and she over-did the timid looks a bit) but she made a good Griet. The roles she normally plays are very different, and she was completely transformed in this. Colin Firth is always great, but I found him a bit too creepy as Vermeer. There were too many long, lingering looks - although that could have been the direction at fault. Among the other cast, I especially liked Joanna Scanlon as Tanneke, Judy Parfitt (Call the Midwife, Ever After) as Vermeer's matriarchal mother-in-law and Tom Wilkinson (The Full Monty) was suitably scary as Van Ruijven, his wealthy patron. Another thing I enjoyed about the film was being able to actually see the paintings mentioned in the book. I mean, I'd already googled them to see what they looked like, but if I hadn't have done that, it would have been very useful! 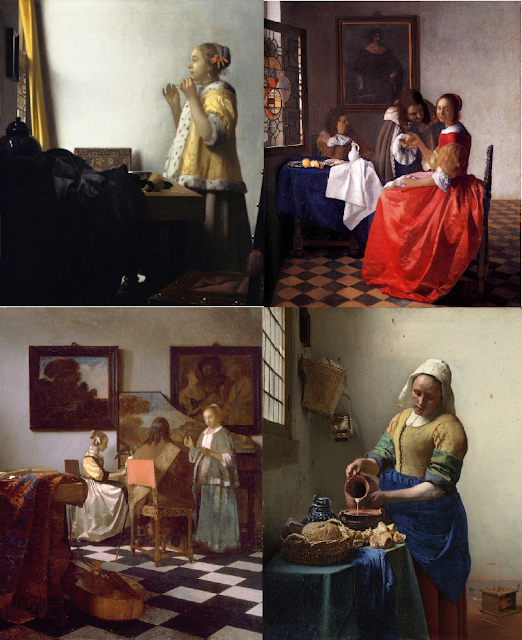 Overall, I liked both the book and the film of Girl with a Pearl Earring, but if I had to say which I preferred, it would probably be the book. It was a very fast read, while the film felt quite slow paced. Also, as Griet in the film very rarely speaks and we can't see her thoughts as in the book, we don't get as much of her personality. We get glimpses of her shrewdness, her determination, her love for her family, her homesickness, but a lot of the time she's a blank slate. I'd recommend both book and film, but the book has the edge. Worth a read.