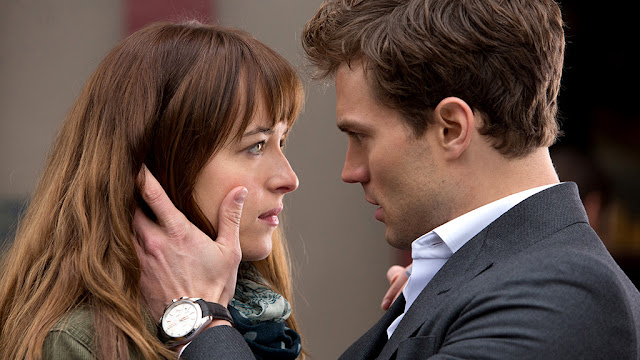 It's been a couple of years now since Fifty Shades of  Grey, E.L James's self-published erotic novel, was the book everyone was reading - and made us all vaguely uncomfortable with its glorification of a sado-masochistic, controlling relationship (especially when our older cousins, and aunties, and parents' friends started posting "mmm, Christian Grey" style statuses on facebook *shudder*. ) I'm not going to lie, I did read it. And half of the sequel.  I watched the film too, when it appeared on Sky on Demand, and since Fifty Shades Darker is out soon (in time for Valentine's Day, how romantic...) I thought it was about time for a review.

The story, if you've been living under a rock, focuses on naive English literature student, Anastasia Steele, who meets big businessman and billionaire Christian Grey when she goes to interview him for her college newspaper. He takes a shine to her, if you can call it that, and proceeds to stalk her: to her place of work, on a night out with her friends (where he tells her off for getting drunk) to her graduation (although technically he was invited to that) to her flat, and further along the line, to her mother's house, a plane ride away, where she specifically told him she was going to get some space, away from him. Oh, and somewhere along the line he drops the bombshell that he's into S&M and doesn't have girlfriends, just 'submissives', who have to sign a contract to say they're under his complete control. But he has a troubled past, which is supposed to explain the creepy behaviour, and Ana fancies him, so it's all good. 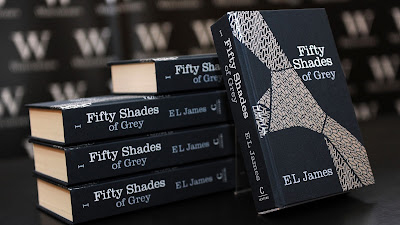 Fifty Shades of Grey began it's life as Twilight fan-fiction, which seemingly focused on the worst aspect of Edward Cullen's personality - his controlling side - replaced the vampirism with BDSM and dispensed with everything that, in my opinion, ever made Edward attractive. Well, almost. (Christian's still rich and handsome, after all. And he plays the piano.) The next step for the author was a self-published e-book, where the characters were thinly disguised with new names, and when that became wildly successful the book got properly published and became a phenomenon. Fair play to E.L James, she's made a lot of money out of it and got a lot of non-readers to pick up a book. I don't know quite what that says about the current state of feminism, but people will like what they like. And I can kind of see why they did like it. The book wasn't very well-written, and I struggled to get past the obvious-when-you-know-they're-there Twilight parallels. But it was easy to read and the story had a good hook, an every-girl heroine and a hero (or is he an anti-hero?) that millions of women, and probably a few men, fell for. I didn't like him much though. S&M is one thing, if that's what you're into that's your business. But I don't understand why anyone would fantasise about being controlled outside of the bedroom? I mean 'the contract' says Ana can't drink, can only eat the foods Christian approves, and has to go to the gym regularly. That's not a boyfriend, that's a personal trainer.

The other thing that bothered me about the story, was the implication that Ana's going to be the girl who finally gets through to Christian and 'change' him. Not his...preferences...but some of the other stuff. Like the not sleeping in the same bed, or making a commitment, or talking about his past and his feelings. Somehow I don't think that's a good message. But who am I to judge? This book wasn't written to send a message. It's one woman's Edward Cullen inspired fantasy, that plenty of other people enjoyed. I enjoyed it too, kind of. But I can appreciate that Christian Grey is not boyfriend material, and hearing people gush over him like he's their ideal man, does disturb me a bit. He's not just Mr. Rochester/Rhett Butler level bossy and arrogant. He's a buy-your-place-of-work-so he's-your-only-boss, isolate-you-from-your-friends-because-they-let-you-drink, whip-you-with-a-belt-till you-cry level of controlling nutcase. He's really not nice. No amount of Helicopter rides are going to change that. 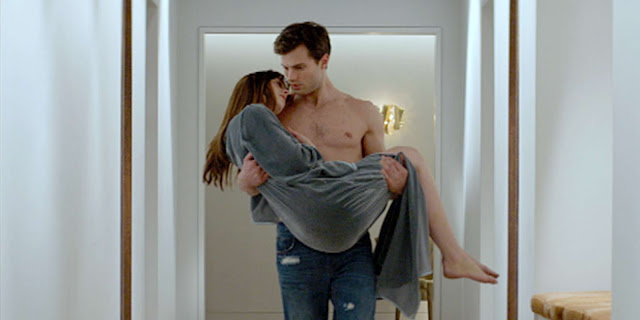 After reading the book, your first thought might be 'how are they ever going to make a film of this that can actually be shown in normal cinemas?' but I feel like (director) Sam Taylor-Wood and co. did a great job. The film followed the story of the book pretty faithfully and avoided making a straight up porno. Firstly, the music was great, and they milked the 'romance' and the 'courtship' from the beginning of the book, which for me was the most interesting bit (the second half seemed to be all sex scenes and no plot). However the key, I think ,was that the film didn't take itself too seriously. It was almost tongue in cheek, and the script was sort of knowing, as if the characters saw the humour in their situation. I hear E.L James didn't much like the finished product, and clashed with the director. Apparently she thought there wasn't enough sex, but I bet what she really had a problem with was the tone. (The book does take itself a bit too seriously. All that 'inner goddess' crap.) She shouldn't have taken offence though - they didn't make a mockery, they made it funny in the right way. It was playful, and it worked.


Part of the reason it worked so well, in my opinion, was due to Dakota Johnson, who played Ana. She was very brave to take the role, but she made it work for her. She played the innocence but she also had great comic timing and a spark that Kristen Stewart never really did have, bless her. Johnson would have made a great Bella. Jamie Dornan, unfortunately, was miscast. He's an attractive guy and he was great in The Fall. But he was just so awkward in this.  Maybe some men can make a grey, woolly jumper look sexy and intimidating, but he really isn't one of them. His American accent was pretty shocking, and there was a scene where he leaned across the bed and tried to seductively eat toast, that makes me cringe just thinking about it. He made an almost passable Christian when he was wearing a suit and not speaking much, but...yeah.

All in all, Fifty Shades of Grey was not particularly my cup of tea. But it's not all bad, and the film was actually pretty decent. I even liked the ending. I thought they wouldn't bother making the next two films, and so it felt like a satisfying conclusion. Also it was the original ending of the first book, so book fans couldn't complain.  Still, now they have made a sequel, which messes that up a bit. Ah well. The trailer looks like there could be more plot to this one, and I never did finish Fifty Shades Darker, so I don't know how it ends. I might have to go see it, just for curiosity's sake...