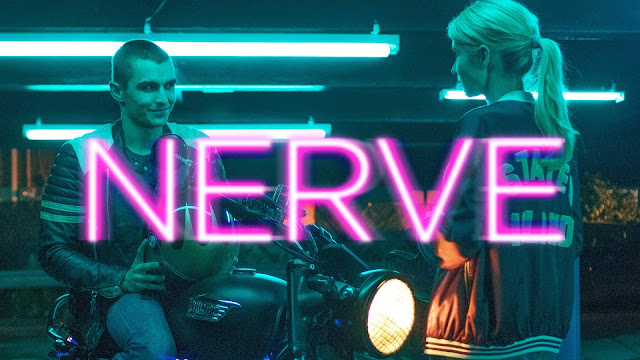 I've been sadly neglecting this blog recently (due to a combination of life/uni work and focusing more on We'll Meet it When it Does) but I've finally got a review for you! A vaguely dystopian YA novel about an online dare game that gets out of hand, Nerve isn't really the kind of book I'd pick up of my own accord. But the film looked intriguing so I thought I'd study up.


Written by Jeanne Ryan, the book was a fast and (no pun intended) unnerving read with a great premise. Basically 'Nerve' is an online game, where watchers pay to watch and players play to win. Players can choose from a number of prelim dares to complete, which they must then film themselves doing. If they get enough watchers and views they go into the higher rounds, where the dares are dictated to them by the watchers and the game and they win prizes along the way. It's a believable set up, although I felt that the prizes offered were never tempting enough (in the book) for the level of risk the dares entailed. And some of the dares were very risky. 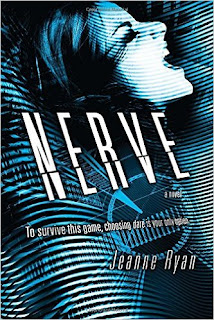 This was one of the things I felt that the film did better. The game was the same, the characters were the same to an extent, but the dares were different - and it was much more believable that the characters would try them. Sneak out of a store in your underwear for $2,500? I can see it. Pretend to be a prostitute in a dangerous part of town for $100 and some shoes? Not so much. I also felt that the characters were more likeable in the film - Vee in particular (the central character, played by Emma Roberts.) In the book you feel bad for Vee, and she does get you on side. But she's also kind of shallow and not all that smart. Still, I liked her in the film. I think it helped that film Sydney (the best friend) was meaner as Vee appeared nicer by comparison. I thought the film was well cast overall. Dave Franco (playing Ian) is now officially my favourite Franco brother. 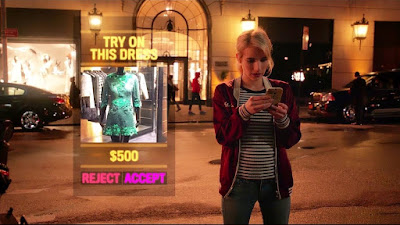 The more I think about it, the more I'd say that the film was better in general. Being a visual medium, it was able to show properly how the watchers were viewing the dares and I liked all the little captions, texts, etc. that popped up on the screen. I know they do that all the time in films nowadays (I feel like Sherlock was the first TV show to really own it) but it definitely worked here. I'd say the book was a bit creepier with a lot of tension, but the film had more fun moments, more likeable characters and it tightened up some of the iffier plot points, including the ending. Not that I didn't like the ending in the book - and maybe the film's was more cliche - but it was also more satisfying.

There were also a few tweaks to the plot and characters that didn't really make much difference one way or the other. Sydney and co. had been transferred from drama geeks to jocks and cheerleaders, with Vee as team photographer rather than a make-up artist. Matthew's name had been changed and he wasn't in it much (only as needed!) And they switched Vee's backstory to something totally different - although as the backstory only serves to give Vee a reason to want to play the game, it doesn't really matter what it is. And of course the setting was different. New York, not Seattle.


If I was recommending one or the other, I would say watch the film. The book was exciting and dark but the film was more fun - and I think the ending worked better.