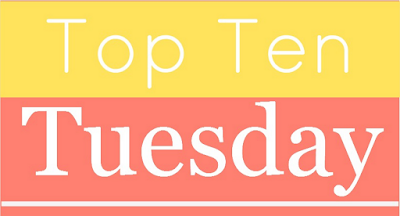 It's time for another Top Ten Tuesday and this time it's a freebie (you can do any topic you like). I've been inspired by reading George R.R Martin's A Knight of the Seven Kingdoms, which - unusually for an adult book - has some gorgeous illustrations. It reminds me of the 'chapter books' I used to read (or have read to me) as a kid, which almost always had pictures. There seems to be less of that now, even in children's novels (why did Harry Potter not have illustrations, I wonder?) so I thought I'd get a bit nostalgic today with a list of my favourite illustrated chapter books.

A Knight of the Seven Kingdoms
by George R.R Martin, illustrated by Gary Gianni 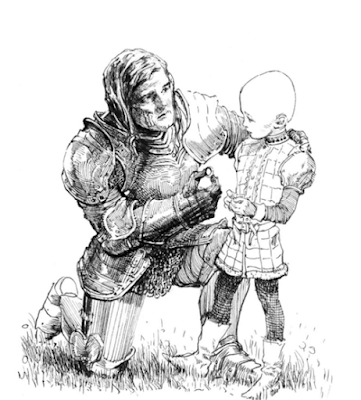 For anyone who ever fancied reading A Game of Thrones but was turned off by all the sex and violence, I'd highly recommend this collection of companion novellas. The three stories follow the adventures of Dunk, a Westerosi Hedge Knight and his squire, Egg. They're set in the same world as A Song of Ice and Fire, around a hundred years earlier, so there are a lot of familiar names and places, but no dragons or White-walkers. The illustrations give the book a real fairy-tale feel, and I love the delicate line drawings - but I could have done with a map and a couple of family trees.

Winnie the Pooh
by A.A Milne, illustrated by E.H Sheppard

I'm not one of those people who see Disney's Winnie the Pooh as a violation of the original artwork, because Winnie the Pooh is great in any form. However, E.H Shepherd's illustrations are especially lovely.  The characters somehow have loads of personality, despite being simply drawn and I love the map at the beginning.

The Chronicles of Narnia
by C.S Lewis, illustrated by Pauline Baynes 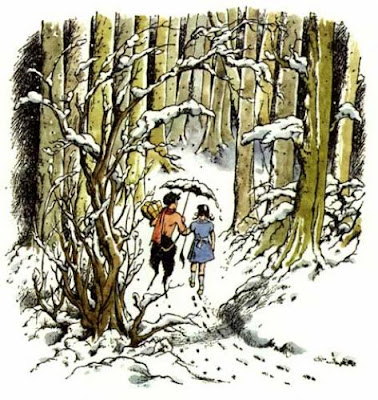 Pauline Baynes is possibly my favourite illustrator of all time, and I love her Narnia drawings. C.S Lewis apparently thought she couldn't draw lions, but I disagree. She creates the world of Narnia, Calormen and Archenland beautifully, and the books wouldn't be the same with a different illustrator. 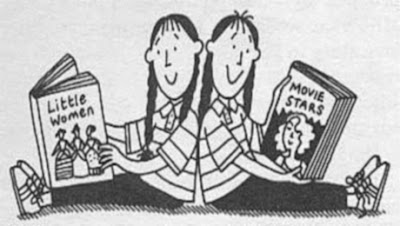 Nick Sharratt has a simpler, more cartoony style than some in this list, but I still think he's a genius. Who else can make a face with two dot eyes and a line mouth look so expressive? It's even possible to differentiate between the identical twins in Double Act (above). I grew up on Jacqueline Wilson books and the drawings definitely added to the appeal. 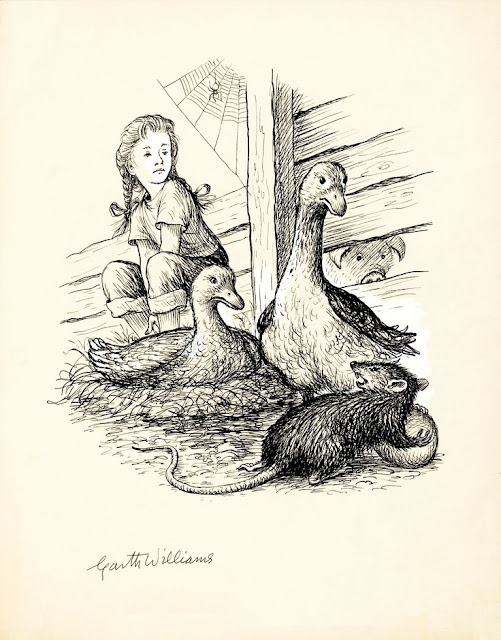 I haven't read Charlotte's Web since I was little, but I liked the illustrations, and can still remember some of them quite clearly. Garth Williams also illustrated the Little House books, by Laura Ingalls Wilder. 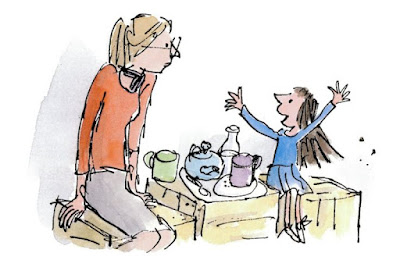 Quentin Blake is another artist with a simple cartoony style, but he's still one of the best at bringing characters to life, be it Mr. Twit, the Grand High Witch or just a (seemingly) ordinary girl like Matilda. Despite enjoying some of the film adaptations, it's still the Quentin Blake characters I imagine when I read any of Roald Dahl's books.

Milly-Molly-Mandy
Written and illustrated by Joyce-Lankester-Brisley 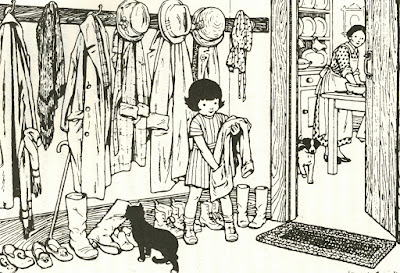 Joyce Lankester Brisley's stories about the little girl in the red-and-white striped dress are charming whatever your age, and the pictures paint the world of Milly-Molly- Mandy's village perfectly. When I was little my dad used to photocopy he illustrations for me to colour in, and I liked the maps at the beginning. It's interesting too, that the author lets Milly-Molly-Mandy grow up. It's subtle, but in the later stories she's definitely taller, with less of a baby face :)

The Worst Witch
Written and illustrated by Jill Murphy 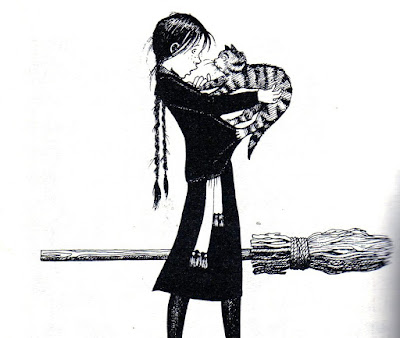 A forerunner to the Harry Potter series following the exploits of the 'worst witch' at Cackle's Academy, I was a fan of both Jill Murphy's books and the TV series that followed. But, like with Roald Dahl, the Mildred Hubble above will always be the way I see her. However, a new adaptation of the books has recently been announced - starring little Lyanna Mormont from Game of Thrones. I think she'll be fab too!

A Monster Calls
by Patrick Ness, illustrated by Jim Kay 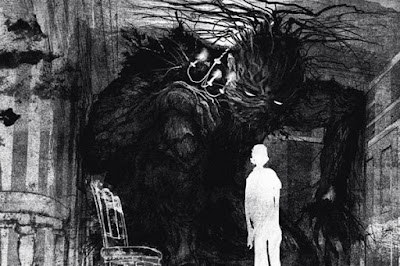 I'll admit I haven't actually read this, but I've heard so many good things I'm putting it in the list. Might encourage me to finally read it. A Monster Calls won the Greenaway medal for Jim Kay's illustrations, and tells the story of a young boy struggling to come to terms with a parent's illness. It's a bit of an abstract concept to illustrate I'd think, but from what I've seen, the pictures look haunting and gorgeous. 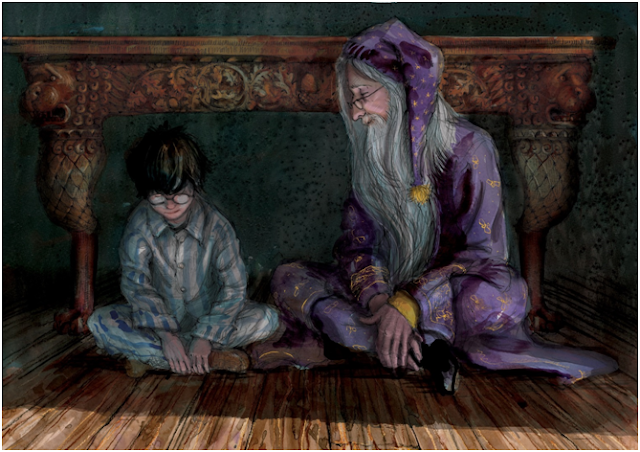 Aw, finally we got an illustrated Harry Potter! And it was worth the wait. Jim Kay's illustrated Philosopher's Stone makes you realise, among other things, just how young Harry is in the first book. I love everything about this - and I'm excited for Chamber of Secrets.

But also...
The Tales of Beedle the Bard
Written and illustrated by J.K Rowling 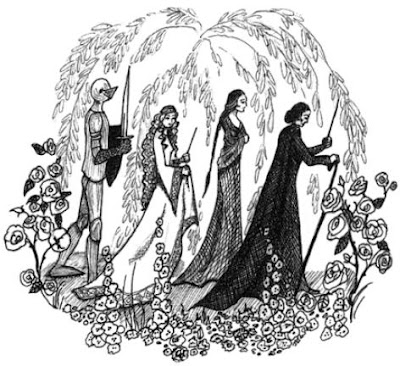 I've already got my ten, but as a cheeky bonus I thought I'd mention Beedle the Bard, where J.K Rowling does her own illustrations. And they're pretty good! Reminiscent of Pauline Baynes, but a bit more cartoony and amateur (she never claimed to be an artist after all, I'm not trying to mean.) I'd have been interested to see the Harry Potters done in a similar way, with drawings dotted throughout, like in the Narnia books. Maybe one day?

Do you have a favourite illustrated book, or would like to see more nowadays? Participating in Top Ten Tuesday? Let me know in the comments!