Top Ten Tuesday: Literary Characters I'd like to Re-visit as Adults 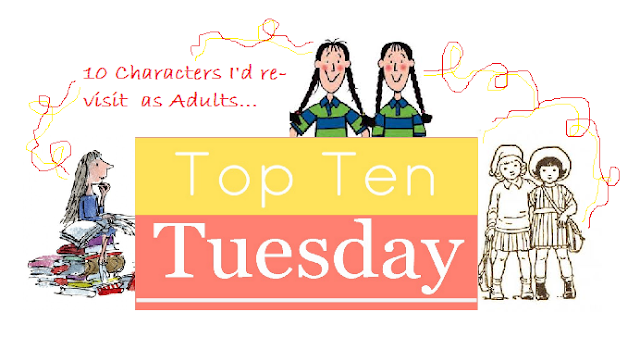 (Top Ten Tuesday is a weekly meme hosted at The Broke and the Bookish.)

This week's TTT is all about those fictional children we never got to watch grow up. Not because they died, or anything. Just because their stories didn't take us that far. Whether they were the stars of our favourite children's books or child characters from adult novels that never got a 'next-generation' series, fictional children tend to either a) have very interesting parents or b) have interesting and adventurous childhoods, so it's natural to wonder how their adult lives would have panned out.

Some books tell us in an epilogue (Harry Potter) or just bung in a few family trees at the back (Lord of the Rings.) If we're lucky we'll get a novella, or a brief appearance in later books to get us up to speed (Ballet Shoes). Nowadays readers just want more and more, although sequels revisiting favourite characters aren't always a good idea (Sisterhood Everlasting, Go Set a Watchman). But they're not always awful either - I really want to read Five Children on the Western Front (a new sequel to Five Children and It which won the Costa children's book award) although it's supposed to be heartbreaking.  Anyway, here's my list: the ten kids I'd most like to drop in on as adults.

Mary Lennox
from The Secret Garden by Frances Hodgson Burnett 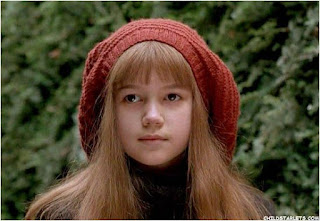 Mary's transformation from spoilt brat to nice, well-rounded little girl was complete by the end of The Secret Garden and I'm sure she'd have her share of 'suitors' in later life. The big question is though, what about Dickon? If he stays on the scene I'm sure they'd want to be more than just friends, but there's the difference in station to contend with. And what about Colin? Would the family expect her to marry her cousin one day? So much potential for drama.

Matilda
from Matilda by Roald Dahl 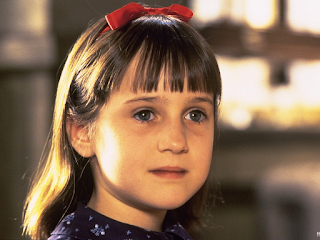 Surely Matilda would have had an interesting life. With her brains she could do so much - and if she ever found herself in a situation when she wasn't being stretched, maybe her powers would return? Also, did she ever reconnect with her parents? Did Miss Honey ever meet anyone? Did Matilda ever tell her future friends/partner etc. about her interesting early years? Not like they would have believed her.

Meg Dashwood
from Sense and Sensibility by Jane Austen 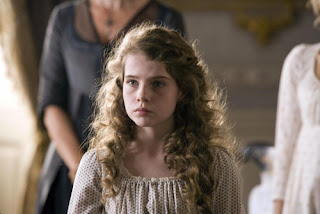 I'd love to find out what happened to Elinor and Marianne's little sister after they left to get married. Jane Austen hints that Sir John and Mrs. Jennings focused their matchmaking powers on Meg once she got a little bigger, but I think she would have quite enjoyed that. She's quite a different personality from her sisters and I'm sure a love story involving her would be good fun. 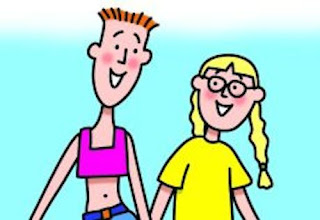 I'd be interested to hear what happened to any of Jacqueline Wilson's characters after their stories ended. When I was little I always felt like the books didn't end properly - but that was because they were 'real world' stories so there was never a neat happy ending. If I could be reassured about just one character it would be Tanya. A kind kid at heart with a difficult past and no-one to really care about her, I just need someone to tell me she found some real happiness in her future. And that she saw her little sister again. I'd also like to know how the twins from Double Act got on. As a kid I identified so hard with Garnet (and hated Ruby) but I like to think they both did well. That Garnet 'got on' at her posh school, Ruby achieved her acting dreams and that they stayed close!

Scarlett's children by Charles and Frank were left out of the film adaptation, but I'd still like to see how they grew up. Especially Ella, as Scarlett's least favourite child. I hope she didn't have too hard a time. Also, it'd mean we'd find out whether Scarlett and Rhett got back together. Rhett always looked out for Wade in particular, so I like to think he'd try and keep in touch... 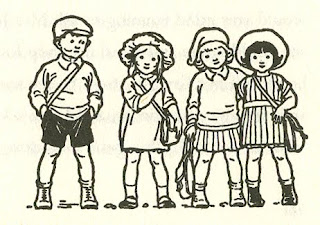 They might be old-fashioned children's stories, but I still love Milly-Molly-Mandy. They're so simple and cosy but the characters are well-drawn and you really know who they all are as people. Also the illustrations are gorgeous. I'd like to revisit the little girl from the white cottage to find out a) did she ever leave the village and b) did she marry Billy Blunt??

Damian and Anthony
from Millions by Frank Cottrell-Boyce 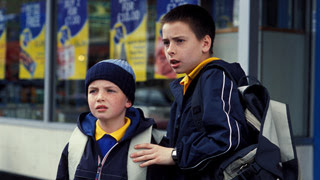 Aw, the two kids from Millions. Such a good book, although I didn't like the film as much. When practical, money-minded Anthony and his sweet younger brother Damian find a holdall full of bank notes they've suddenly got more money than they know what to do with. I doubt these two would have wildly interesting futures, but I'd like to see them happy, and maybe Damian working with a charity and changing the world!

Mae Mobley
from The Help by Kathryn Stockett 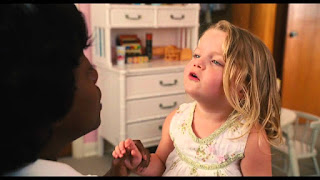 Mae Mobley Leefolt hasn't got the world's best parents, so I hope Aibileen came back to visit at least once in a while. I hope she grew up without prejudice and didn't turn out like the women in her mother's circle. Most importantly, I hope she remembered that she is kind, she is smart and she is important. :)

Antonia Sharpe
from the Sharpe series by Bernard Cornwell 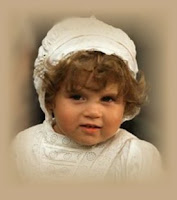 I still haven't finished the Sharpe series (I'm on Sharpe's Siege) but I doubt we'll hear any more from his daughter Antonia. Teresa was my favourite of Sharpe's paramours, but she didn't last long and Sharpe's baby daughter was left with her Spanish grandparents. Yet, with parents like hers, Antonia is sure to be a bit of a character. Did her guardians ever tell her that her father was a war hero and her mother a partisan? Did she ever see her dad again? Bernard Cornwell hasn't ruled out writing more books, so there's still a chance we'll find out, isn't there?

Cat's a nice kid, although we see a more jealous side to him in Mixed Magics. I'm sure he'd be a great Chrestomanci, but I'd like to see his journey towards it, embracing his powers and learning to be a leader, now he's out from Gwendolyn's shadow.

Agree with any of these? Any other characters you'd like to re-visit? And exactly where can I find that Ballet Shoes novella that explains what happened to the fossils???? Let me know in the comments!