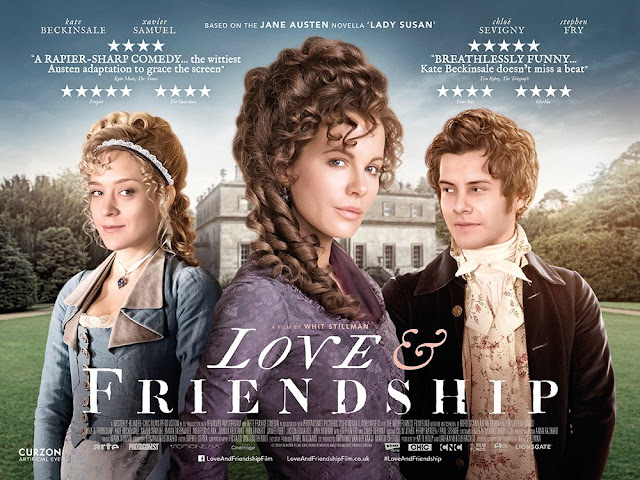 As someone who considers herself a Jane Austen fan, it's kind of embarrassing that, until recently, I had no idea that Lady Susan was a thing. Then I saw the trailer for Love & Friendship, a new film based on the un-published novel (given the title of an earlier work from Austen's juvenalia) and decided this had to be rectified. I'm so glad I finally discovered it, because Lady Susan was fab. The book and the film. There are a few un-finished Jane Austens out there, but I'd never sought them out before - because wouldn't that be too frustrating? I mean technically Persuasion wasn't finished either, but you can't tell with that one. Luckily, Lady Susan, unlike Sandition or The Watsons, is also pretty much complete, despite never having been published. The novel is told in epistolary form (through letters) although towards the end the letters stop and Austen sort of summarises. So it's not totally satisfying, but there is an ending. 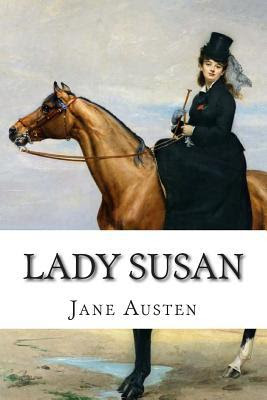 The book itself is nice and short (so not that intimidating) and I would really recommend it. It's not as good as Jane Austen's other works, but it's funny and a bit different. The story focuses around the widowed Lady Susan Vernon, who's not your typical heroine. In any other Jane Austen book she'd be a scheming side-character, but because the novel is told through letters she almost manages to get you on side. She's horrible really, but fun to read about. The novel begins with Susan and her daughter, Frederica, vacating the house of the Manwaring family, who they've been staying with. Something's obviously gone down between Susan and the husband, and naturally the wife wants rid of her. Our charming anti-heroine has also been trying to ensnare wealthy family friend, Sir James Martin, for Frederica, who wants none of him (the reason becomes clear later on). After dumping her daughter in a boarding school, Susan then re-locates to Churchill, the family home of her dead husband's brother and his wife Catherine, where she precedes to cause ructions, particularly following the arrival of Catherine's younger brother, Reginald DeCourcy. 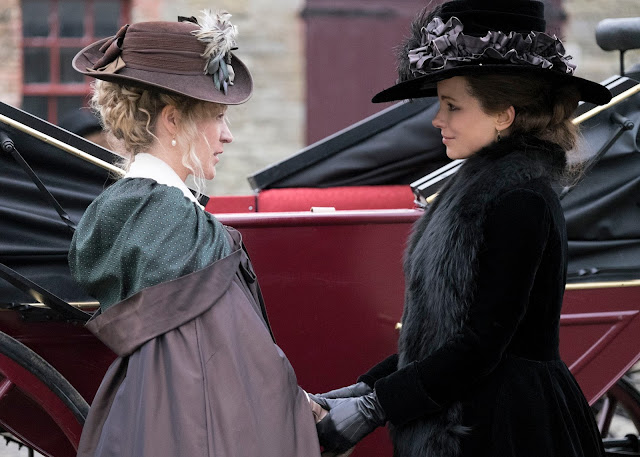 It's all a bit confusing at first, as you have to get your head around who's who. Everyone's 'Mr. De Courcy' or 'Mrs. Vernon' since they're all family, and when everyone refers to their in-laws as brother or sister it can be hard to figure out who the actual brothers and sisters are. But once you know, you can get on with things nicely. Other letter writers include Susan's friend Alicia and Catherine and Reginald's parents. 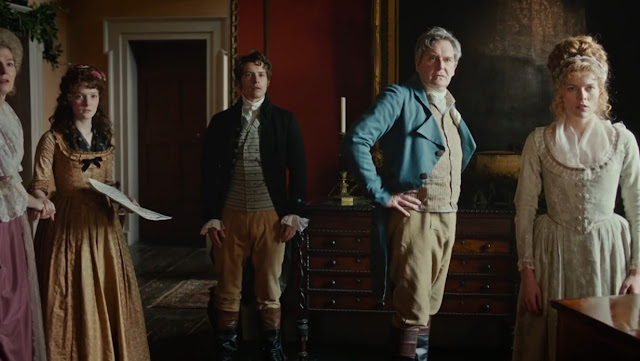 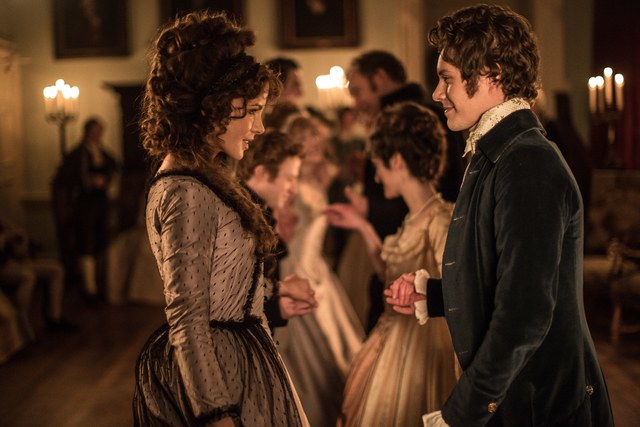 Considering all the problems this novel throws up - an incomplete conclusion, letter form, lots of unknown characters, an anti-heroine as protagonist (not to mention, no-one's heard of it) - it's not surprising that an adaptation of Lady Susan hasn't been made until now. Particularly as Jane Austen has plenty of finished novels to deal with first (will someone make a decent Mansfield Park already??). However, writer and director Whit Stillman has done a brilliant job. Love & Friendship was genuinely funny - people were laughing out loud in my cinema, a lot, and while not all the jokes are Jane Austen's own (although some of the best ones are) the humour throughout is witty and Austen-esque, and the cast make the most of some great lines. Tom Bennet as Sir James Martin was great ( I loved the bit about the 'Twelve' commandments) and one of my favourite scenes was between Catherine and Reginald's parents (a very funny James Fleet and Jemma Redgrave) reading a letter. It was just a simple scene, but for some reason it cracked me up. 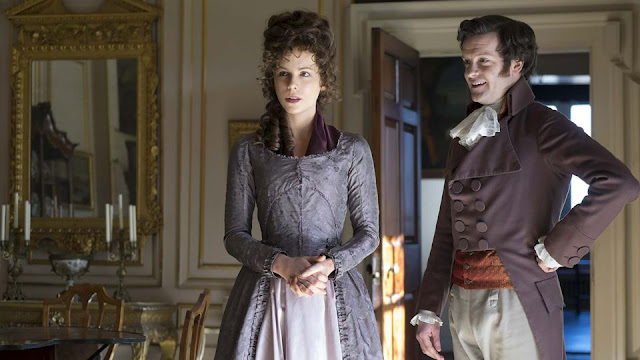 The film solved all the 'problematic' elements of the book very well. To help with confusion they put character names and mini-descriptions on the screen when we first met each family - which sounds weird but it worked. The ending was very slightly different but rounded things off well and made the conclusion less abrupt. They also gave Lady Susan someone to talk to at the beginning (Mrs. Cross) so we could see the full extent of her scheming, as we do in the letters. (They got a good joke out of that, and an immediate bit of insight into Susan's character.)

Maybe the biggest problem to solve is the character of Susan herself - she's scheming, manipulative and a bad mother, but we still have to like her a bit, whilst hoping her plans will be foiled (particularly when it comes to poor Frederica.) But there's no need to worry here, as Kate Beckinsale is great. She looks beautiful, she gets the most out of every joke and she's got buckets of charm. (Which makes me want to re-evaluate her turn as Emma Woodhouse, where I thought she wasn't charming enough.) Plus, she gets to wear some gorgeous clothes. Probably since it's an earlier novel (Jane Austen wrote this when she was 20) Love & Friendship has been set in the 1790's, so the costumes are less typical, regency Jane Austen and more Poldark. Despite wearing lots of mourning black and purple early on, Kate Beckinsale's outfits definitely steal the show. And the hats. Just, wow. 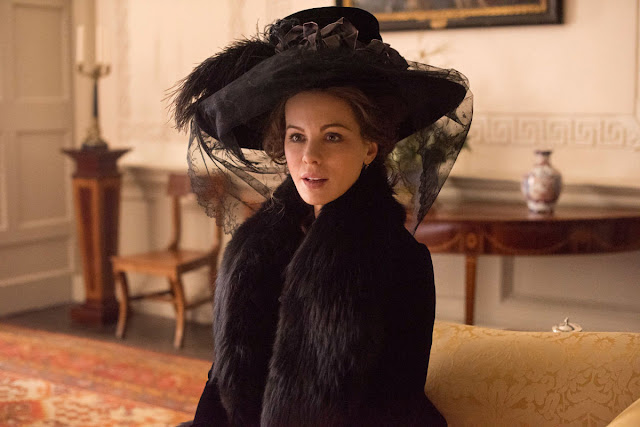 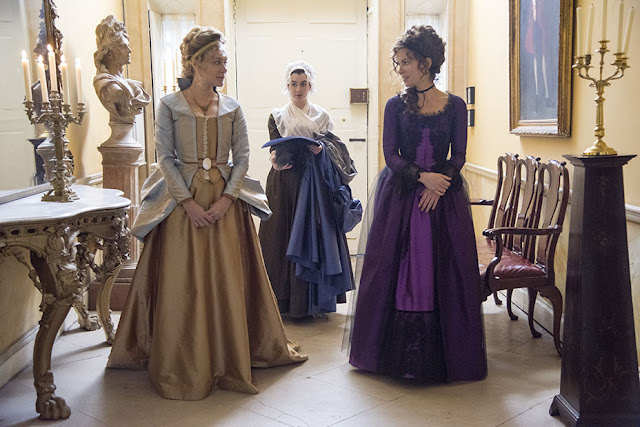 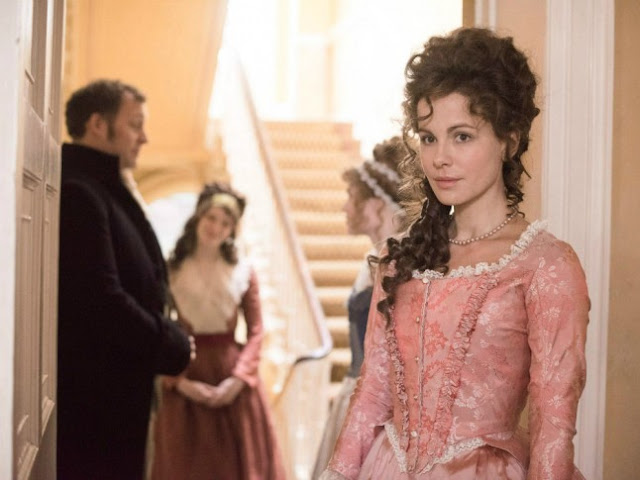 If I had to criticise this film, I'd say that the way it's cut is a bit odd. I suppose that's the style, but it felt to me like it jumped about too much. There were some seemingly pivotal scenes which they cut away from (and then Lady Susan or whoever filled us in on the details later) that I wanted to actually see. That'll be partly to do with the letters only alluding to certain events, and not telling us the details, but they could have made something up, couldn't they? Stephen Fry (as Alicia's husband) was under-used and the girl playing Lady Manwaring was a bit over the top. I also think making Alicia American was a bit random. It didn't bother me particularly, but her accent took me out of things at times. I also felt a bit sorry for James Martin at the end, but I suppose he was oblivious. This is just nit-picking really, but other than that my only issue would maybe be the title. I see why they did it - 'Lady Susan' sounds dull and 'Love & Friendship' fits better with 'Pride and Prejudice' and 'Sense and Sensibility'. But it's confusing to call the film after a different un-finished work than the one being adapted. And it wasn't really about love or friendship anyway. It was about Lady Susan!

Overall, I thought this was a great film, and a fantastic adaptation of a little known novel. Would recommend both book and film, and it was so nice to discover a new Jane Austen. Maybe I'll read Sandition next... 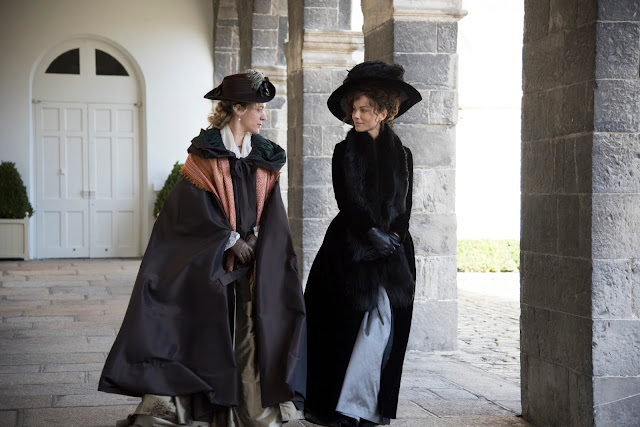