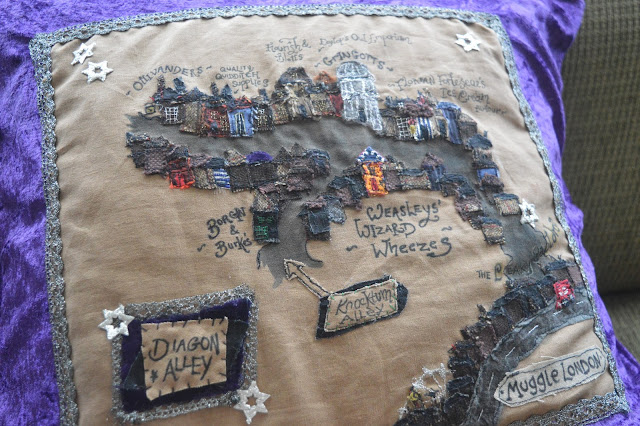 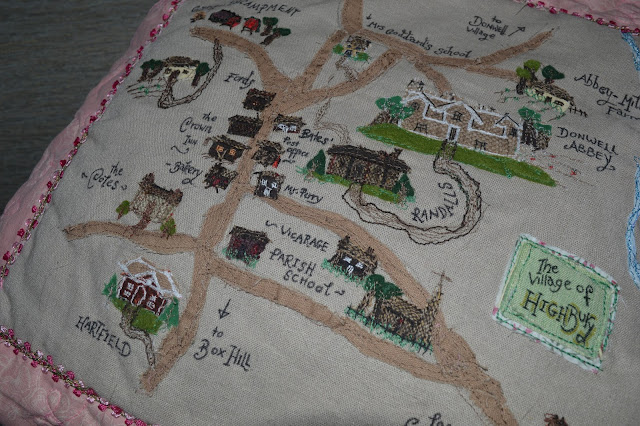 A while ago now I had the idea of making 'map cushions' - I'd always loved the maps at the beginning of books, I'd also finished university and had a lot of free time on my hands. Although I never got round to starting that Etsy shop (and I don't think it'd be time or cost effective anyway) I did get a few different cushions made and all have gone to good homes (see LOTR, Winnie the Pooh, Westeros and Hogwarts here.) Anyway the novelty wore off and I thought my cushion making days were behind me, but turns out they're not. I caught the bug again a couple of months ago and my sister 'commissioned' me to make a Harry Potter cushion for her friend's birthday, which I finally got around to this week. This was the result. 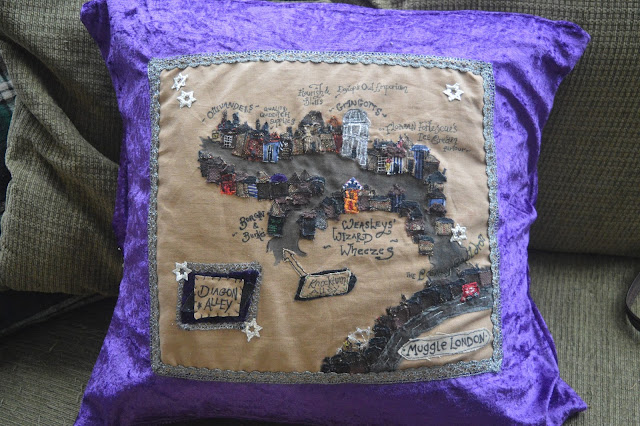 Diagon Alley was a tricky one, as I couldn't find a map to copy that looked the way I envisioned the cushion. In the end I just improvised, using my illustrated Philosopher's Stone as a guide for how the shops might look. I machined them onto some beige fabric and then hand-stitched the little details. 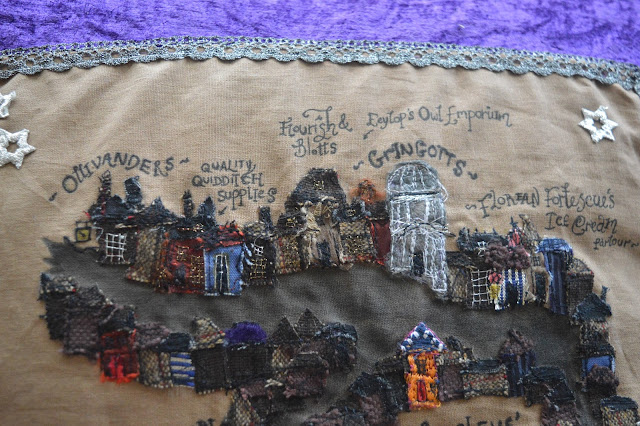 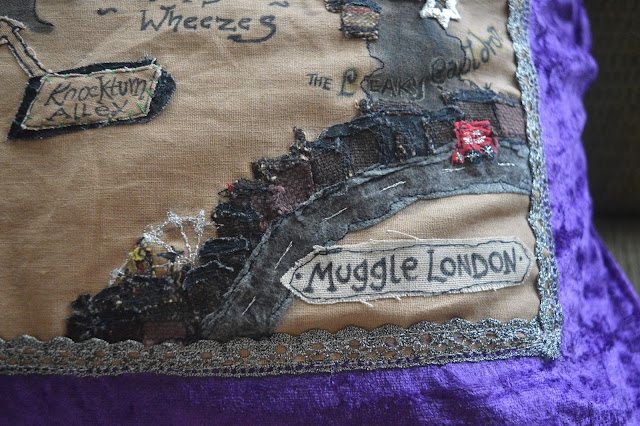 I love the arty side of making these, the actual maps, but I still need to work on the technical side. I made the cushion cover in an envelope style so I could take it on and off - also because I forgot to buy a zip or velcro - but it's not as neat as I'd like. 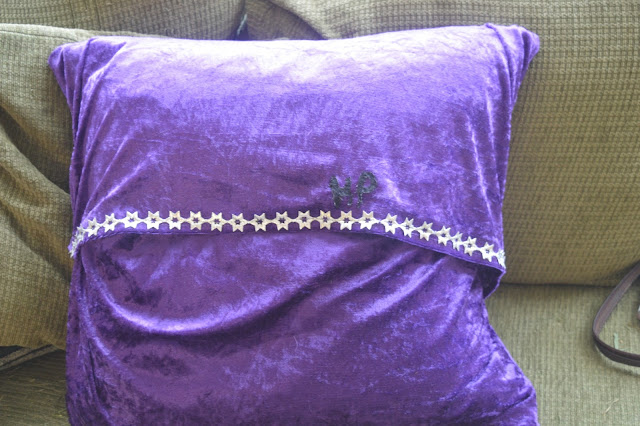 I'd not made a cushion in ages, but I'd always planned to do a Jane Austen one. I toyed with the idea of Bath or a Pride and Prejudice map, but eventually decided on an Emma one, because all of the important landmarks are in one place - the village of Highbury. Mr. Knightly's house is out of proportion, but I'm going to say it's a perspective thing. Again I couldn't find the perfect map to copy, so I cobbled together a couple of different interpretations and improvised a bit. I tried to make Hartfield look like Emma's house in the mini-series, and it's still my favourite bit of the map. 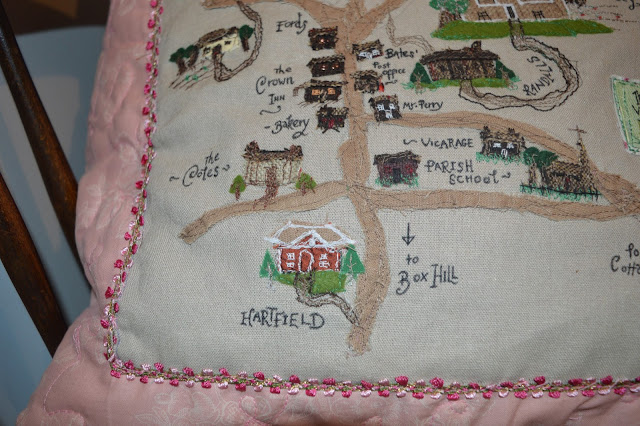 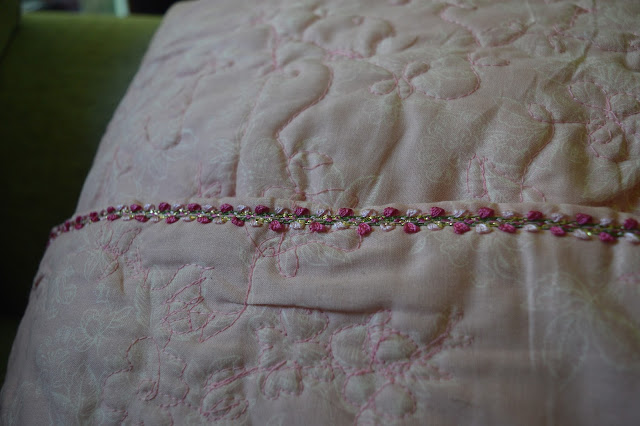 For all my other cushions I've used a velvety background, but that didn't feel right for Highbury. I chose a pink fabric patterned with flowers instead, although it was tricky finding one that didn't look too modern. The fabric I picked was thin, cottony stuff so I quilted it, trying to follow the pattern on the material as much as I could. I thought it was quite effective but it took forever. 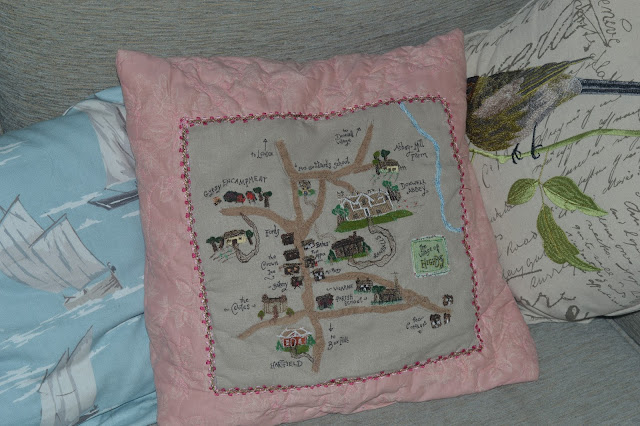 I want to try a Pride and Prejudice one next, and maybe a Milly-Molly-Mandy or a Treasure Island? If anyone has any other ideas let me know!