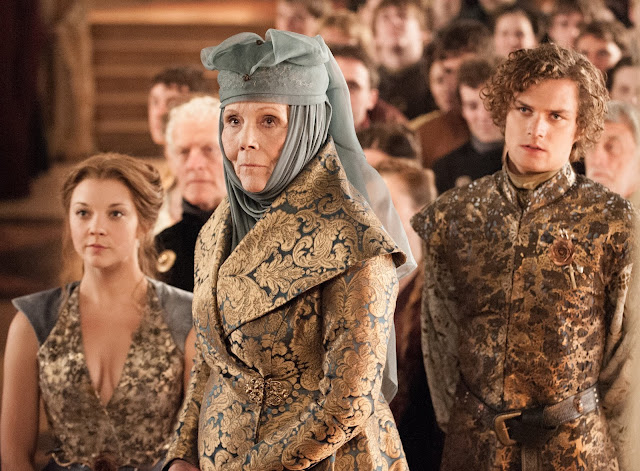 As Game of Thrones season 6 will be here soon (:D !!!) I've been refreshing my memory of the most recent seasons (and have come to the conclusion that season 4 is hands down the best.) I've just got to a certain bit where the Tyrell family feature quite heavily, so  I thought it was time for their costume post! (See also Daenerys and the Starks)).

The Tyrells are the second wealthiest house in Westeros, their family seat is in Highgarden (further South than King's Landing and Casterly Rock, not so far as Dorne), their colours are blue and gold and their sigil is a golden rose "growing strong." All of these factors look like they've been taken into account when designing their clothing for the show.

The first Tyrell we meet is Sir Loras - "The knight of the flowers". Sansa Stark gets a bit of a crush on him with his flowing hair and shining armour: he fits her knightly ideal, like the white knights of the songs. Shame he only has eyes for Renly Baratheon. The Tyrells (as their sigil would suggest) are not a very war-like house, and Loras's armour is perhaps more decorative than practical, with golden roses in abundance. Yet he's still a great fighter and when Renly puts in his bid for the iron throne, Loras joins his Kingsguard and puts his armour to more practical use. 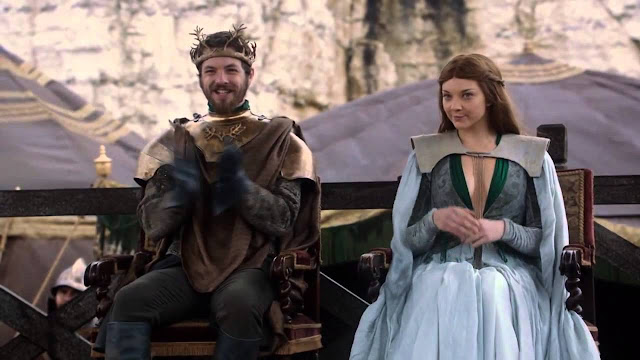 Despite the relationship between Renly and Loras, it's Loras's sister Margaery who actually marries the would-be king. Margaery is characterised by her ambition, and she's not averse to using her feminine wiles to get what she wants. Not that this is going to work on Renly, but that doesn't stop her from giving it a try. A plunging neckline seems to be a staple of Margery's wardrobe. She also wears lots of floaty fabrics in light blues and greens, but as Renly's queen her clothes seem more structured than when she's with Joffrey. Sharp lines and stiff collars feature - maybe replicating the look of armour, as she's in a war-like setting? 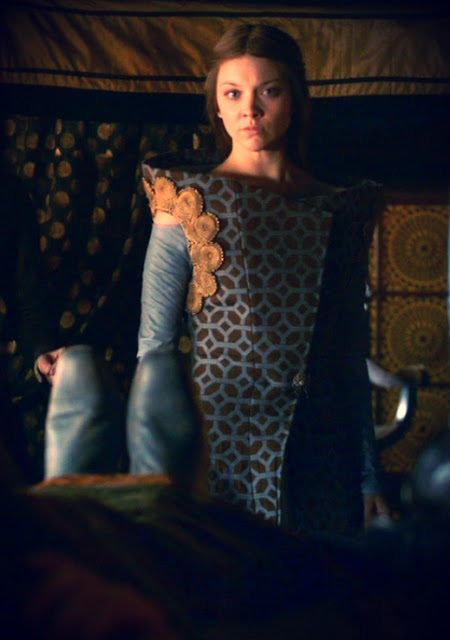 Once she gets to King's Landing, Margaery wears some of the loveliest clothes in the show. They might be revealing, especially in the medieval-style setting, but I love the colours and she always looks gorgeous. As with Loras, the golden rose makes an appearance often - as a belt, jewellery or a pattern on the fabrics. Although Margaery's style is very feminine, the thorns on the roses remind us that she's not all sweetness and light. 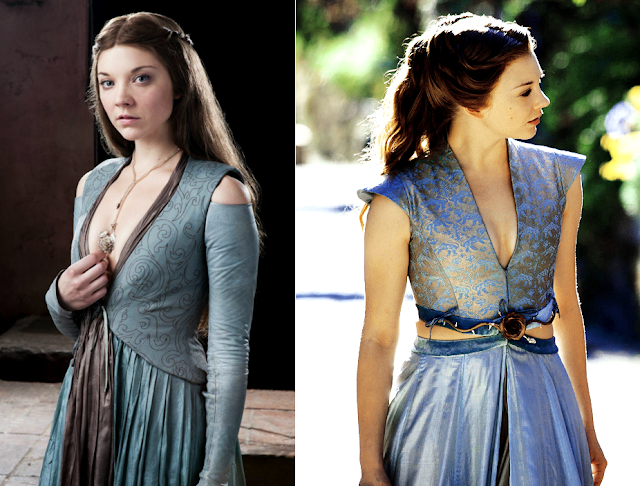 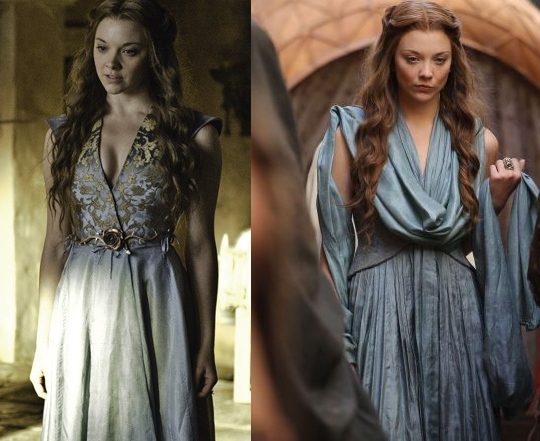 One of Margaery's strengths is playing the game of hearts and minds, and she makes the people of King's Landing fall in love with her. Good thing too, as no-one could love Joffrey (except his mother.) In the scene where she visits the slums of Fleabottom she dresses relatively simply and shows she's not afraid to mix in with the people. 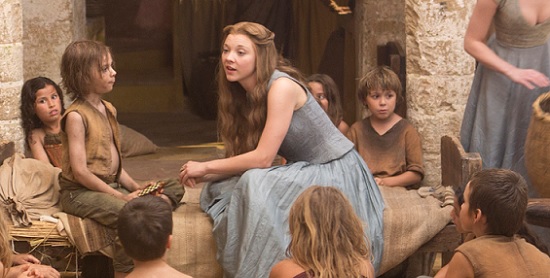 However. Margaery and Joffrey's wedding is a lavish affair and Margaery's dress has all the trademarks of her usual style. It's not exactly modest, with an open back, low-neckline and bare arms. It's a very pale blue rather than white, a pattern of thorns front and back, and a train of decorative roses. It's a fierce sort of dress, not girlish or particularly bridal, but glamourous as always. 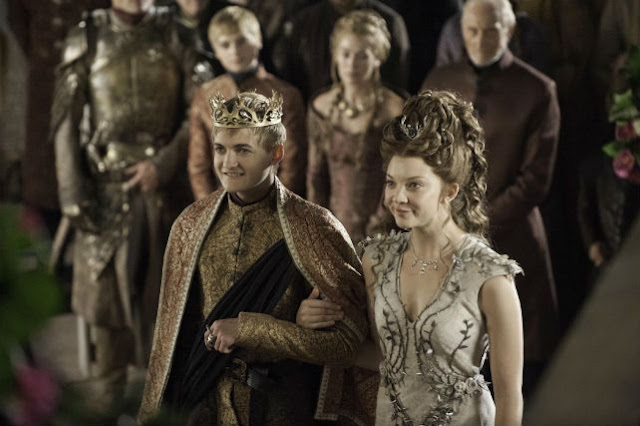 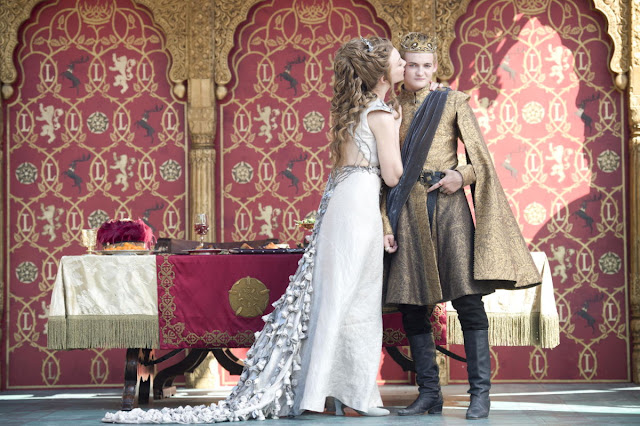 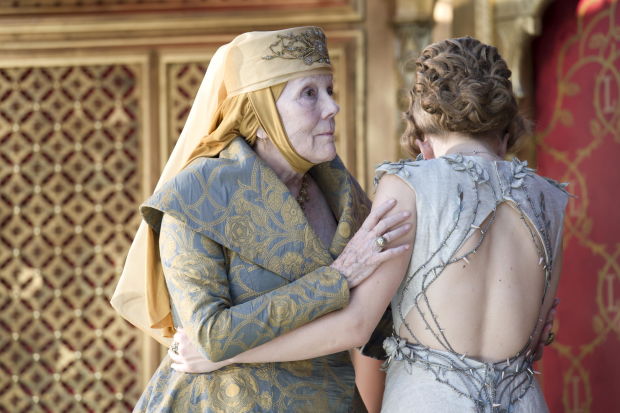 Aside from Margaery and Loras we also meet their grandmother, the Tyrell matriarch - Lady Olenna, or "The Queen of Thorns." Olenna is smart, no-nonsense and a force to be reckoned with. Like Margaery she is always seen in the Tyrell colours of blue and gold, the rose emblem a prominent feature in the embroidery and patterns on her clothing as well as her jewellery and headdresses. Olenna is always covered up and but her dress is never dowdy. The only time she dispenses with bright colours is when she's in mourning. Then she swaps her colourful headdress for a black one. 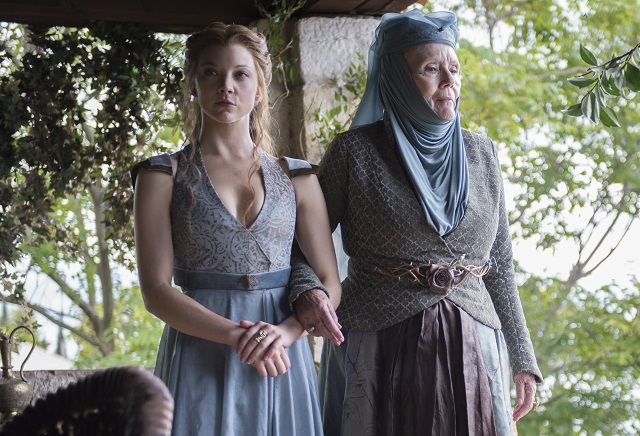 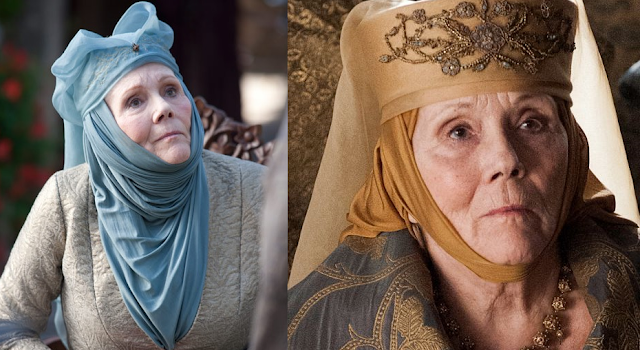 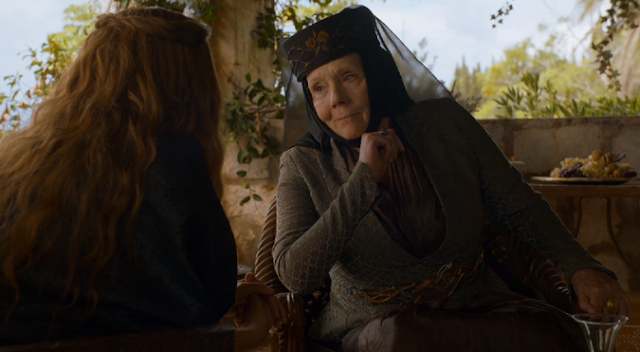 Margaery's mourning clothes don't differ wildly from her everyday, they're still low-cut with the golden rose motif, on top of the black. She does wear a shawl though, which is unusual for her. 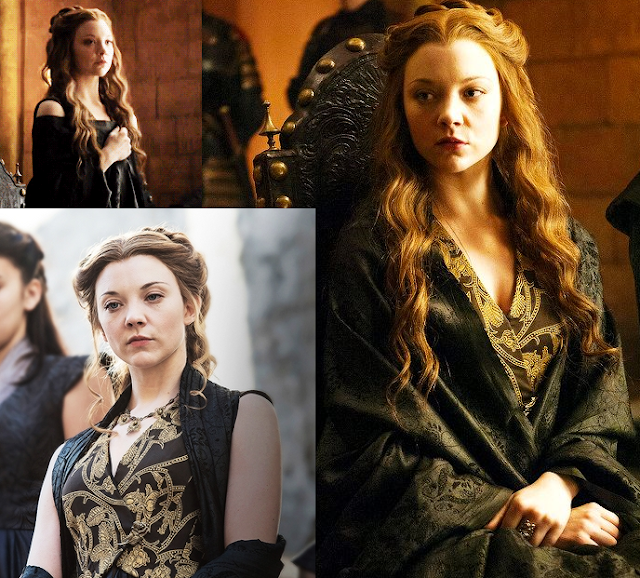 When she's crowned Tommen's queen, Margaery begins to dress a little differently. She opts for a more regal gold in most of her outfits, rather than her usual blue, and begins to cover up a little bit more. She looks a little more traditional now, and her ladies seem to have followed suit. 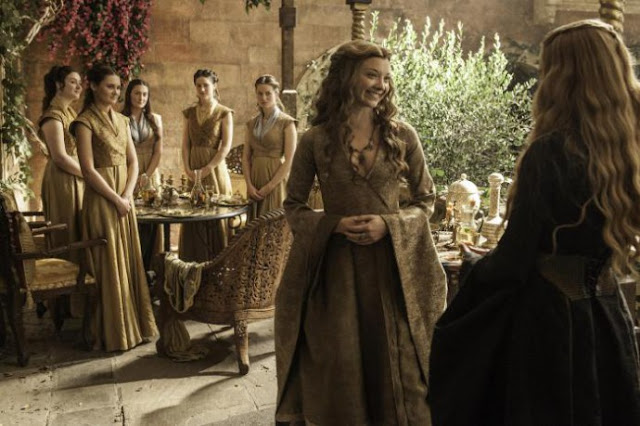 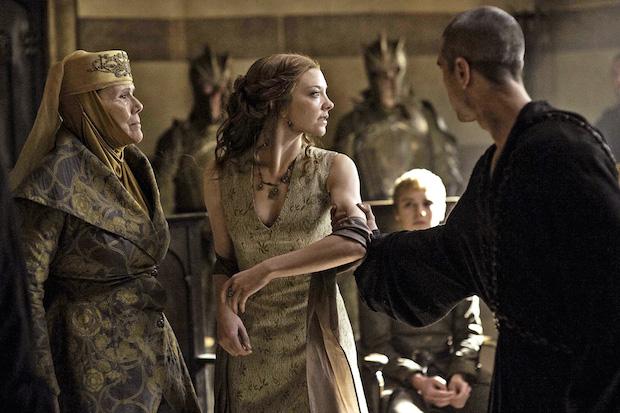 Once the Tyrells are settled at King's Landing, Loras isn't often seen in his armour. Like his sister and grandmother he mainly sticks to blue and gold, he wears a rose brooch (or whatever the man's equivalent is?) on his formal clothing and the golden rose motif is ever present in the patterns on his clothing too. 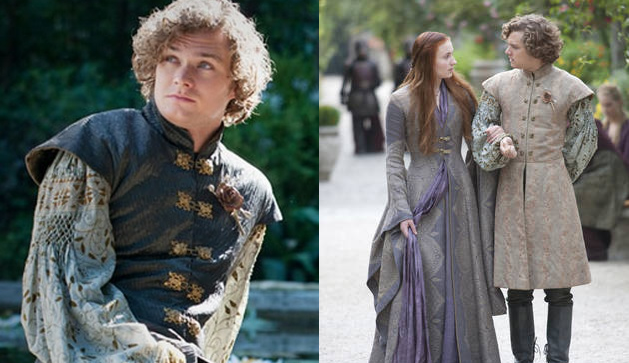 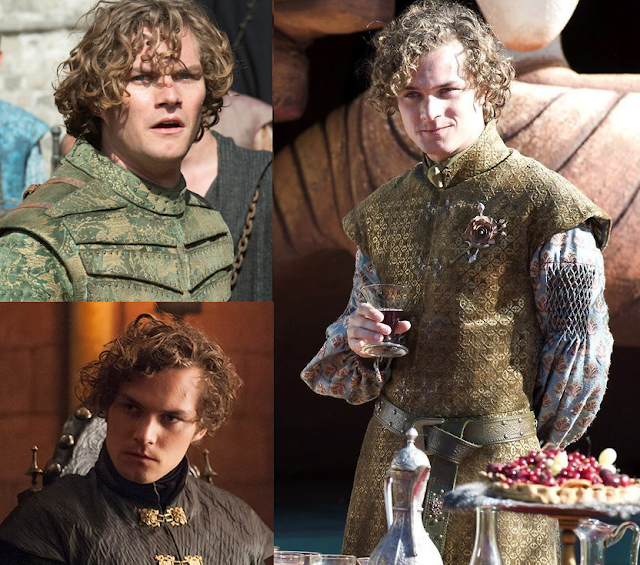 Loras  dresses more flamboyantly than most of the men in Kings Landing - even his armour is pretty -  and when he is put on trial by the sparrows, even his supposedly 'raggedy' look involves an intricately patterned shirt. 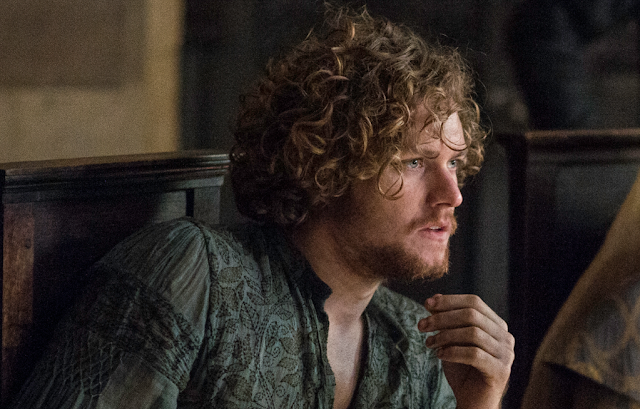 The Tyrells are one of my favourite Westerosi families and I'm interested to see what happens to them next series. They're not having much luck at the moment, but maybe it will turn. I hope so - I'm missing their gorgeous clothes!

Here's the Season 6 trailer just in case you've not seen it - no pretty clothes for the Tyrells here. :(