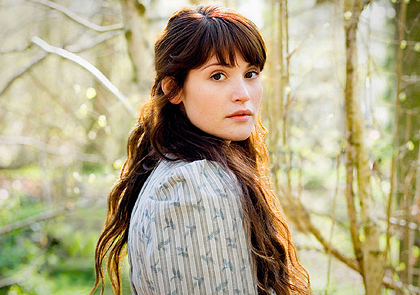 I was first introduced to Tess of the D'Urbevilles in sixth-form, when the BBC broadcast a mini-series starring Gemma Arteton and (a then mostly unknown) Eddie Redmayne. The most I knew of the story were my mum's hints that it was relentlessly miserable, but it was a pretty-looking period drama, so obviously I was going to watch it anyway. My mum was right, but for some reason I still loved Tess (I usually hate overly grim stuff) and went on to read the book.

For a classic, I was surprised how easy to read the novel was, and also that the TV series was quite a faithful adaptation (everyone says the rape scene is more ambiguous in the book, giving the possibly that she was only 'seduced', but I definitely didn't read it that way.) Not going to lie, I can't remember much more about Hardy's novel, so this will primarily be a review of the mini-series. 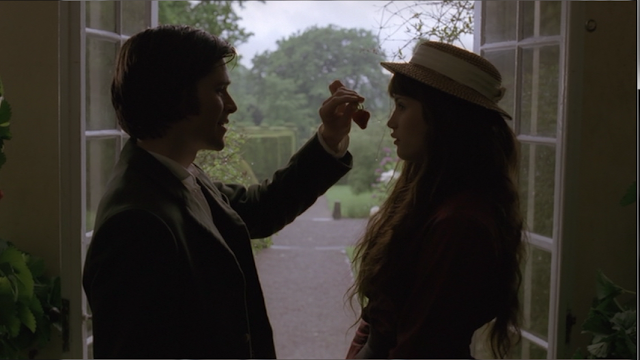 If you know as little of the story as I did, the basics are this: Tess Durbyfield is a naive country girl, who's father discovers  he is descended from a noble line called D'Urbeville. There is a rich family of this name in the area, so Tess is persuaded to go and 'claim kin' - A.K.A take advantage of her connections with these rich supposed-relatives. It turns out that the son of the house, Alec, is an all-around bad lot, Tess is taken advantage of and... well, everything goes down-hill from there, basically. The sub-title of the book is 'a virtuous woman' and the point Hardy makes is that Tess is an innocent, but because this one terrible thing has happened to her, the society she lives in makes it impossible for her to move on or be happy. The women are all victims and the men are all vile hypocrites or... well, they're all vile hypocrites.

Sounds like a cheery watch, doesn't it? But despite all the misery, there's a lot to like about this series. There are four episodes, all a bit different in tone. Episode two is 'the happy one' (my favourite) and episode four is where the writers (including Hardy, I'm not exempting him from this) appear to lose the plot. Stonehenge! People stabbed with butter knives! and a sex-scene bordering on Outlander territory, that taught me Eddie Redmayne looks much better with his clothes on.  But lets talk about the good things. 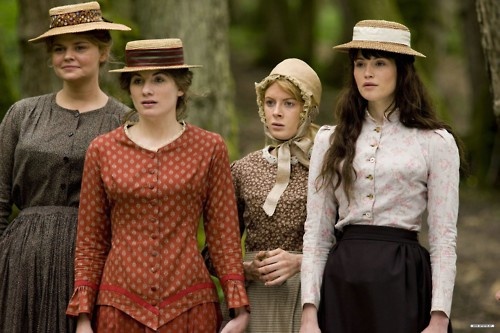 Firstly 'Hardy country', otherwise known as Dorset, looks lovely and so does Gemma Arteton. She actually gets the chance to act in this, too, unlike most of the films she's made since. The cast are all great in fact - Alec is suitably sinister and Eddie Redmayne almost makes Angel Clare likeable, which is no mean feat. The only thing I'd say is that I felt the chemistry between Tess and Alec was much stronger than with Angel, but in some ways that worked. Alec will always have a hold over Tess because of what happened, and being able to see that on screen made their scenes together more charged. 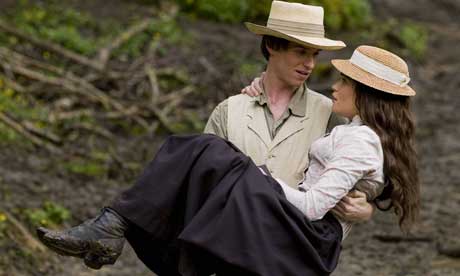 The second episode is my favourite for a lot of reasons. Firstly because we see Tess rebuilding a life for herself, making friends and experiencing a small window of happiness. She meets Angel, who seems like the perfect man, and it's all very sweet and Lark-rise to Candleford- esque for a while. It's not that often that books and TV dwell on female friendships, and I was expecting the other girls on the farm to be mean to Tess, but they were lovely and that made me happy. The acting from this trio was great too,  Jodie Whittaker being the stand-out as Iz Hewitt. Still, this episode's not all sweetness and light as the running tension throughout is will Tess tell Angel the truth - and should she? Aware that things were not going to end well, but not knowing how they would pan-out, was the ultimate nail-biter for me. It made for some great drama.

Tess of the D'Urbevilles is not a happy story, but I still think it's a worthwhile watch. You care so much about the characters (well, Tess and the girls anyway) that it keeps you invested, and the villains are characters I loved to hate. The acting is great, the atmosphere is well created and it sticks reasonably closely to the novel. There are glimpses of hope or happiness even in the grimmest moments (one of my favourite scenes is the girls singing together at the turnip farm) and although, to be fair, the hope is usually dashed, those little moments of humanity make the series watch-able. Plus, it's far from boring, it kept me gripped. And the costumes are lovely! 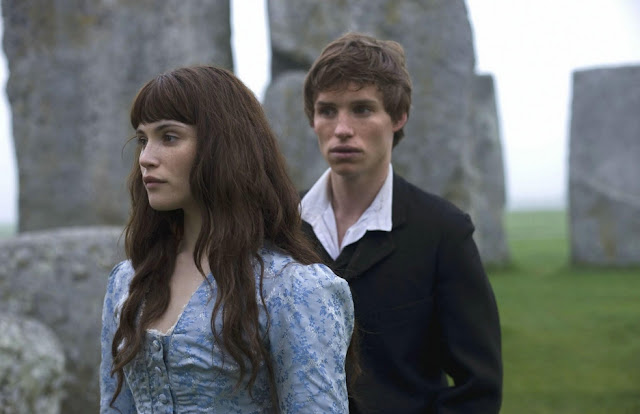 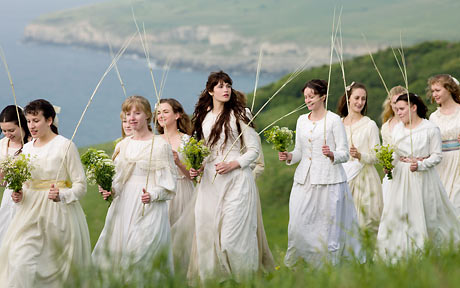 Tess's clothes evolve and change as the story moves on. When we first see her she's dancing with the other young girls from her village. They're all dressed in white, a symbol of their purity. Tess hasn't yet met horrible Alec. 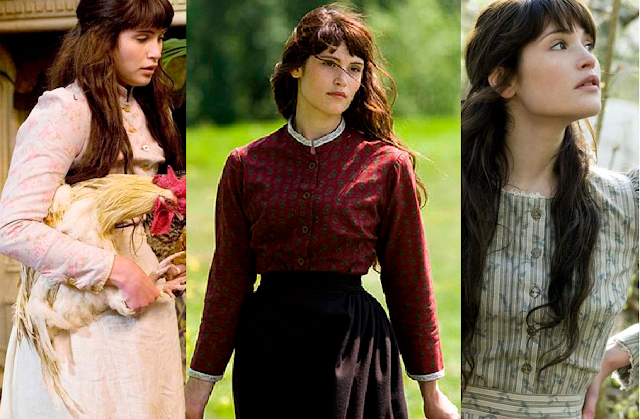 When she goes to stay with the D'Urbevilles she goes to work, rather than as a guest, so although her clothes are smart and clean they're not overly fancy. Shirt-waists, skirts and aprons mostly. Until Alec buys her that dress (right) which may look simple and pretty, but really is not suitable for her station and so marks her out as someone Alec is favouring. 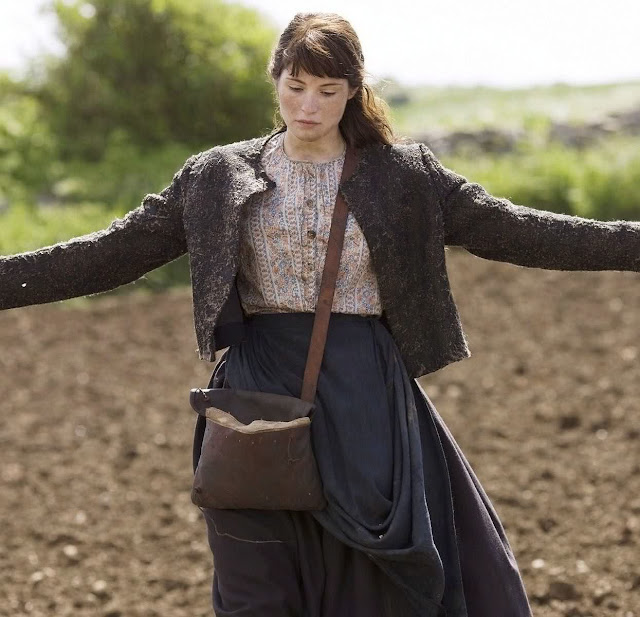 Tess's clothes as a milkmaid are similar to what she wears at the D'Urbevilles and during a brief rise in her fortunes she gets the chance to dress a bit more smartly, too. But then we're on to episode three, the pinnacle of doom and gloom, and her smart milk-maid's clothes become a scruffy down-at-heel version. She's given up on her trademark red and is mostly seen in sorrowful blues, mauves and greys.

I'm trying to not go over the top on the spoilers here, but towards the end of the series, we see Tess in a whole new light and dressed in a whole different kind of wardrobe. Coiffed hair, velvet gowns, make-up - but she's not herself. As beautiful as she looks we all want her back in her old clothes.

With the two leading men the costume designers have gone with a simple but effective scheme. Angel, as the 'white knight' is usually in light colours - fawns, besieges and creams (at least for the first half of the story.) Alec, on the other-hand, is our resident villain, so he basically wears a lot of black. The other contrast is that Alec really comes from trade, but is masquerading as old stock, so he dresses very flamboyantly - perhaps to compensate for his family's humble beginnings. Angel is the opposite, a gentleman who has decided to live more simply, so his clothes are simpler yet more tasteful.

It's beside the point, but here's a bit of trivia for you: both Eddie Redmayne and Hans Matheson (Alec) have played Marius in film adaptations of Les Miserables. Matheson stars in the non-musical version, with Liam Neeson, Geoffrey Rush and Claire Daines. If you haven't seen it, it's worth a watch - it misses a lot out, I think, but Geoffrey Rush (Barbosa from Pirates of the Caribbean) makes a great Javert!

All in all, I probably haven't sold this to you. But it is very good and up there with my favourite mini-series'. Warnings wise, there are some adult themes and some 'scenes of a sexual nature' - obviously there's the rape scene (although it's not gratuitously done, more implied) and then that bit in the final episode. There isn't any shown violence, although there is a moment where Tess is basically self-harming (she scratches her face) that I had to look away from. Again, this one's definitely for the adults, but it's a well-made series and. I think, a great introduction to Thomas Hardy.