Female Friendships in Books (and why aren't there more of them?) 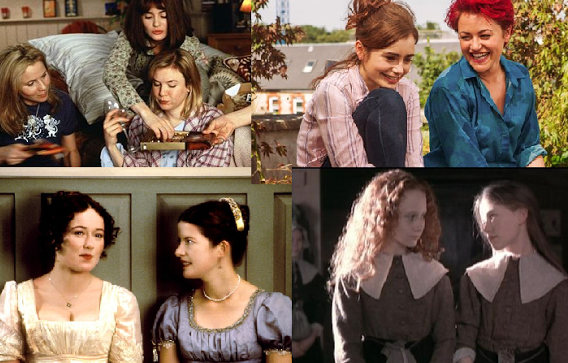 I always think that female friendships, both on film and in books, are under-represented. A lot of rom-com heroines have a stereotypical 'best-friend', but how often is she more than a sounding board for the protagonist's problems? In real life, friendships between girls are complicated - more so, I think than 'bromances'.  I don't think it's because we're 'bitchier.' I'm sick of hearing that. But I do think our friendships take more work. Maybe because girls 'share' more, so we have to work up to that level of trust? Anyway, whatever the reason, 'sisterhood' is a different kind of bond - when it's real, one of the strongest there is. So why do authors and film-makers find it so hard to write about? How many times have you seen the girl-with-the-best-boy-friend trope. Or the girl whose whole life revolves around her boyfriend? Or the token tomboy in an all-male friendship group? Obviously these girls do exist, but looking at popular culture, you'd think they outnumber the girls with girl- friends massively.

As this blog is Based on the Book, I tried to think up some of the most notable girl friendships in books that I've read and enjoyed. It was surprisingly difficult - and I'm not counting sisters, that's a topic for a whole different day! Not all of these friendships are shining examples of unfailing sisterly love; these girls have their fall-outs and their failings, but they're also some of the more realistic, well crafted friendships between women that I've come across. 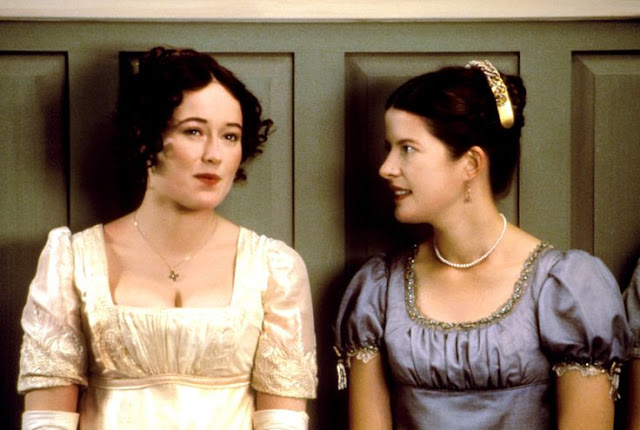 Charlotte Lucas is Elizabeth Bennet's 'particular friend'  and you can see why they're drawn to each other. Both sensible, cynical and smart, Lizzie brings the fun that Charlotte misses out on at home, and Charlotte has the good sense absent at Lizzie's house. The strongest friendship in P&P is between Elizabeth and Jane, but in some ways Lizzie and Charlotte are more interesting. They fall out, for one thing. Lizzie is un-failingly loyal to her sister, but sisters are different and Lizzie understands Jane better than I think she ever does Charlotte. When Charlotte accepts Mr. Collins' proposal a rift is created between the two friends because Lizzie just doesn't get it. She knew Charlotte was practical, but maybe she thought she was all talk. She says at one point 'you know you would never behave in that way yourself.' But Charlotte would and Charlotte did. The friend Lizzie thought she knew is gone. Still, the important thing is that Charlotte doesn't give up on the friendship and when Lizzie comes to visit her at the vicarage, part of it is salvaged. It's changed, but the girls care enough about each other to keep it going - although I don't think it'd ever be quite as it was. 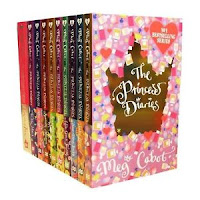 Although Mia's best friend, for the majority of the series, is Lilly Moscovitz, Tina is my favourite. Lilly has known Mia from childhood and they've probably had the most fun together, but there's no denying she's difficult. High-maintenance friends (however much you love them) are all well and good, but sometimes we all need a Tina in our lives. Compared with Lilly's extreme, in-your-face brilliance, Tina is quiet, unassuming and kind. She and Mia have a lot more in common - they like the same things and have similar reactions to situations. Mia can talk about romance novels, trashy TV or her prom fantasies without being made to feel an idiot. I wouldn't want to choose between them, but Tina would definitely be more restful.

Demelza and Verity
- The Poldark Saga 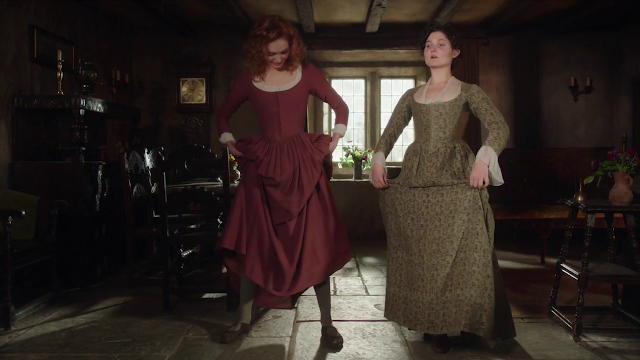 Although there are some...troubling... things in the later books, one of the pros of the Poldark saga is that Winston Graham can write women properly. Demelza, Elizabeth,Verity and Caroline (to name the main female characters) are all likeable and well-rounded and although circumstances make it pretty much impossible for the former two to get friendly, I love the relationship that develops between Verity and Demelza. Demelza isn't keen at first, worried that her sort-of sister in law will be stuck-up and disapproving, because of her 'low birth', but Verity is kind and Demelza gradually lets her guard down. It's a slow burner but their two personalities compliment each other and they're soon firm friends, practically family.

Robin McKinley's Spindle's End is a teen novel and re-telling of Sleeping Beauty that focuses on the princess's life in hiding. 'Rosie' is rescued as a baby and raised by a village girl and her family. Despite her golden ringlets and super long eyelashes (gifted by her fairy godmothers) she's a real tomboy, while Peony (the only girl of Rosie's own age in the village) is perhaps more 'princess like'  - accomplished, sweet and lady-like. Rosie has always avoided her and Peony is a little frightened of the strong-willed blacksmith's apprentice, but when they finally meet a proper friendship is born despite their differences. There is a romance in Spindle's End, but the friendship between the two girls is much more central. It's an odd sort of book, but the characters feel real and so does the friendship. 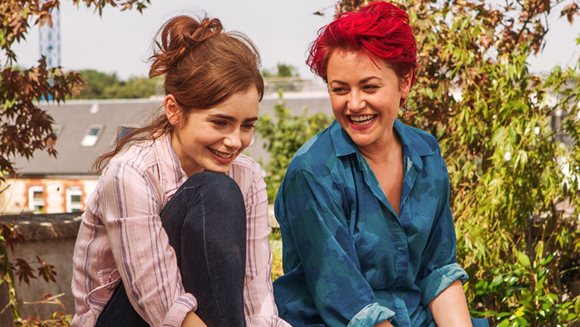 Rosie Dunne and Alex Stewart  have been best friends since they were five (to the exclusion of all others) so when Alex moves to a different continent Rosie's in a fix. Not least because she's now a teenage mum, so it's not like she's got much time for a social life. For a few years, life is hard. Rosie loves her little girl and her parents are supportive, but she's lonely. Enter Ruby, an older work colleague who becomes her first real female friend. Alex might be the person Rosie loves best, but the 'will-they-won't-they' situation makes things complicated. Her relationship with Ruby is straightforward - this is someone she can talk to and have a laugh with, who'll listen to her problems and tell her what she really thinks, but never try to tell her what to do. Having Ruby there allows Rosie to escape from her home life now and again, giving her the chance to relax, act her age and be more than just 'mummy'. Ruby has her problems too and Rosie helps her through in the same way, but both are much happier for having the other in their lives.

The most interesting bits of Testament of Youth (for me) were the war years, but although the lovely 'characters' in this part of the story - Roland, Edward, Victor and Geoffrey -  were some of the defining relationships of Vera's youth, war was to take them all from her. She returns to Oxford when it's all over, lonely and still grieving, into an environment where most of her peers were too young for the war and don't want to dwell on 'the old days.' But then she meets Winifred. Where Vera's closest friends have always been men, she finally meets a woman that she really clicks with. Winnie is less serious than Vera but just as intelligent, with similarly strong principles and she lightens Vera up a bit. A friendship begins that kept Vera going in one of her darkest times and lasted throughout her life. One of her later books Testament of Friendship is all about her relationship with Winifred. 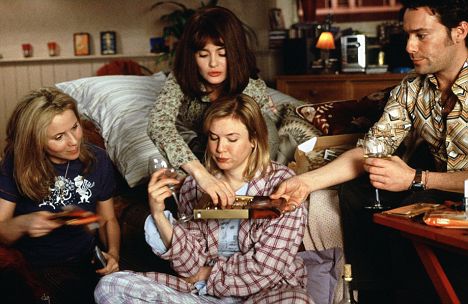 Bridget Jones might be a perpetual singleton, but she's very lucky to have such great (and similarly single) friends in her life. Being single is more fun when there are people to share your troubles with, and Bridget's friends are all supportive and fiercely loyal towards each other. Shazzer particularly is great - an outspoken feminist always ready with a bottle of wine and a good rant - and I'm counting Tom as an honorary 'one of the girls' as he fulfils the same function as a girl-friend. Bridget might think her life's pretty pathetic, but it seems to me like she still has a lot of fun, largely thanks to her friends. In that last scene of the film I always think I'd be torn - Paris with that crowd would be hilarious.

In a book that's all about friendship, the most memorable is that between Benny and Eve. From their first meeting the two girls are very different people, each with their own struggles that have to be dealt with. Yet they're always there to support the other when needed, strongly loyal and genuinely caring. I liked that Maeve Binchy also allowed them some jealousy and insecurity within the relationship, and for the girls to have to have other friends aside from each other, rather than just being the two of them against the world. It's a realistic friendship, but no less impact -full for that.

Hermione and Ginny are an interesting one, since this is a friendship that grows and develops mainly off-page. Hermione's best friends are of course Harry and Ron, and as the books are told from Harry's points of view we don't actually see many of Hermione and Ginny's interactions. Yet when Hermione stays with the Weasleys she spends a lot of time with Ron's little sister - they share a bedroom/tent on a number of occasions, they sit together at meals and they obviously have a lot of girl talk. We barely know Ginny in the early books, but occasionally Hermione gives away previously unknown insights into her personality or life - like that a young Ginny used to break into the broom shed to practice on her brothers' broomsticks, or that she started seeing other boys (despite holding a torch for Harry) partly because of Hermione's advice. Hermione seems to take on a sort of big-sister role, although I always think the friendship gets a bit strained once Harry and Ginny are an item. Is there maybe a little bit of jealousy on Ginny's side? Or is it that Ginny has changed so much (a.k.a. become Miss. Sporty/popular/boy magnet) that Hermione's agony aunt role is no longer necessary? Or maybe I'm just reading too much into this whole thing.

Aw, Helen Burns. So good that she's practically a saint, making the mostly obedient Jane Eyre look a massive rebel by comparison. Helen is Jane's first real friend and the first person she comes to admire. She's  a bit older and she doesn't have Jane's spark, but she's kind, non-judgemental and fond of Jane. She gets a hard time from the teachers because she's dreamy and so makes mistake in her lessons, but she never complains at her harsh treatment. I like the way that Jane's gets angry on Helen's behalf and the extent that the two girls care for each other in the short time they have together. I like too, that Charlotte Bronte doesn't trivialise the friendship, even though it's between children. You do sometimes see childhood friendships in books, but usually it's a boy and girl who will grow up to be in love. In Jane Eyre the girls' friendship is important for its own sake.


Can you think of any great friendships between women in your favourite books or films? Let me know in the comments!