Yesterday I went for a job interview that was three hours long. Why? Because it was a group interview *shudder*. These ordeals seem to be growing in popularity - and in the past I have got myself a job through one (they had us cutting pictures out of a catalogue and making collages at one point). But that doesn't mean three hours in a room, being tested by your ability to perform in group situations, didn't strike fear into my heart. Although I ended up quite enjoying myself (I'm much better at speaking up when there's something to talk about, problems to solve, that kind of thing) I do feel like group interviews are yet another way of trying to weed out the shy people. I understand that in certain jobs, being shy is going to limit you a bit, but more and more these days, shyness seems to viewed as some kind of mental illness. In my first work-place I was basically ordered to be more 'bubbly' or my job would be at risk. Is polite chat and a smile not enough for customers these days? Apparently not.

Anyway, I was reminded of my days at this lovely establishment the other week, when I went to see Brooklyn.  Based on the book by Colm Toibin, it tells the story of an Irish immigrant in New York - her experiences of life in a new city and the ways in which it changes her. It was a really enjoyable film, with great acting and gorgeous costumes. One thing that stood out to me, however, was the depiction of the main character's shyness. You get a lot of characters out there in the fictional world that are described as shy, but it's not always convincing. Yet there were a couple of moments in Brooklyn where I could definitely share in Eilis's pain. And it got me thinking. Below are a few of the literary characters that have really stood out to me over the years as someone like me - not just quiet or introverted, but genuinely shy. Are there any that I've missed off the list?

from Brooklyn by Colm Toibin 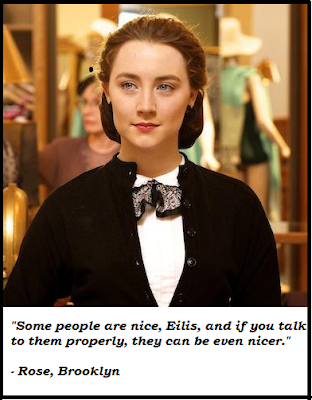 I haven't actually read this book, so I don't know how closely Nick Hornby's screenplay sticks to it, in terms of plot or character. But from the film, I gathered that Eilis was shy as well as homesick. In one scene she's serving in a shop, and there's the most excruciating awkward silence while she waits for the customer's change. In another, an acquaintance attempts to make small talk with her, and is irritated by Eilis's inability to make the correct responses. I know and hate that feeling - apologies to anyone out there I've ever accidentally offended.

from Pride and Prejudice  and Sense and Sensibility by Jane Austen 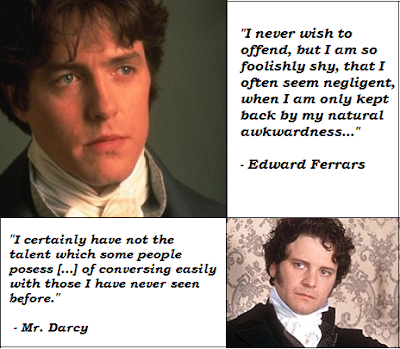 Talking of accidental rudeness, you can't have a list of shy literary characters and not mention Mr. Darcy - who gives offence wherever he goes because he's too 'proud' to talk to anybody. Well, actually, he is proud and stuck-up for the majority of the novel. But his shyness intensifies this. Once you know about his social awkwardness, Darcy's declaration to Bingley that it would be "a punishment" to dance with any woman in the room aside from those he already knows, is more understandable. He's hating life at a party where he knows no-one. Still doesn't excuse some of his comments though...

Where Darcy all but embraces his anti-social tendencies, Edward Ferrars is - like the majority of shy people - rather more embarrassed by his lack of social skills. He's a very sweet man who at one point argues that although he is, unfortunately, shy, he like to think he's not reserved.  And that does make a difference. I don't get the impression that Jane Austen was shy herself, but I feel like she 'gets' it, and her shy characters are treated with understanding and empathy.

from Rebecca by Daphne du Maurier 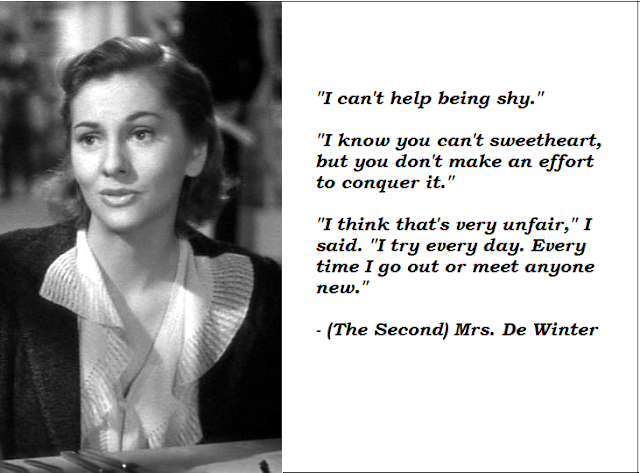 Probably one of the most realistic descriptions of shyness that I can think of, people can be very harsh on the second Mrs. De Winter. She's young and she's in love, and yes, she needs to stand up to Maxim more. But I can fully understand why it's so hard for her to be the lady of a big house like that - tasked with telling the very intimidating servants what to do, having to visit the local tenants and make small talk, and all the while knowing herself to be a terrible conversationalist, especially when compared with the ultra-extroverted original lady of the house, who everybody thought was marvellous. I think it'd be my worst nightmare.

from Little Women by Louisa May Allcott 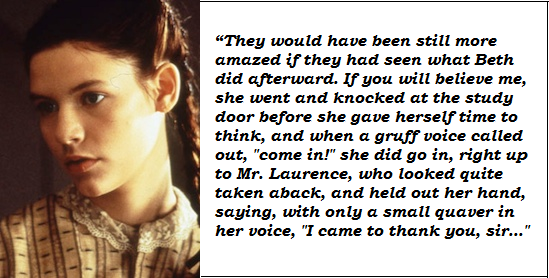 Beth is usually dismissed as the drippy March sister - she's shy, she's mostly does housework and has no big dreams of her own (although personally, I think if Marmee had sent her to school then she might have developed some.) But I like her. She's a nice kid and she wouldn't throw someone's years-in-the-writing manuscript onto the fire out of petty spite. One of the best things about shy literary characters is watching them overcome their shyness, and my favourite Beth moment is when she goes to thank Mr. Lawrence for the gift of the piano. Going over there on her own takes a lot of courage for Beth, and it's great to see her desire to do the right thing win out over her timidity.

from The Sisterhood of the Travelling Pants by Anne Brashares

Before you think it, yes, I know that being an introvert's not the same as being shy. But I think you could class Lena as both if you wanted. I sometimes struggle with the Sisterhood of the Travelling Pants books because I wish I was a Bridget: generous with myself, sporty, adventurous - but I'm definitely more a Lena, with maybe a bit of Carmen thrown in. Not that I don't like Lena, I like her very much. Lena's biggest problem, though, is that she ends up pushing people away because she can't cope with the awkwardness - but she manages. All she needs is to meet someone who likes her enough to keep trying to break down those boundaries. Enter Kostos...

from Anne of Green Gables by L.M Montgomery 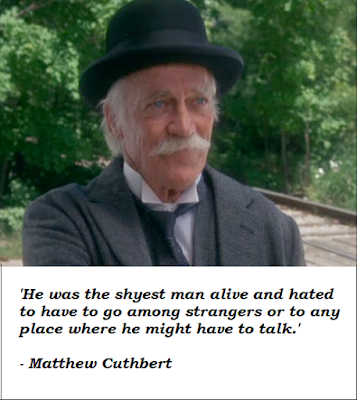 I'm not the world's biggest Anne of Green Gables fan (I'm sorry, but after the first book Anne started to get on my nerves, so I gave up.) but Matthew Cuthbert has got to be one of the most loveable characters in all of literature. Kind, thoughtful, loving and (I hate to use this expression, as a teacher once described me this way, and not affectionately either) painfully shy, Matthew hates to be around strangers and, as an old bachelor, is particularly scared of women. But he's so sweet to Anne and just impossible to dislike.

from the Twilight Saga by Stephanie Meyer 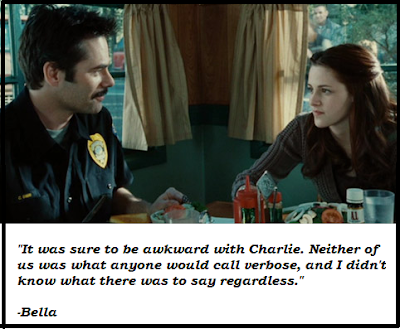 Poor Bella - no-one really likes her any-more, do they? What bothers me is that she's the kind of girl that ditches her friends the minute things get serious with a boy - but in the first book I actually really like her. Stephanie Meyer meant her to be an 'every-girl' and I think she's pretty relate-able. She's a 'good' girl, she works hard at school, she's terrible at P.E (or gym as they call it over there) she likes to read, she's got a small group of friends, and is a bit socially awkward. Her shyness (or is she just an introvert?) is realistically depicted I think - the awkward way she is around her friends, her relationship with the equally quiet Charlie and the way she opens up with an easy-going personality like Jacob. I've definitely come around to team Jacob as I've got older - Bella just seems much more human with him (no pun intended).

from Jane Eyre by Charlotte Bronte 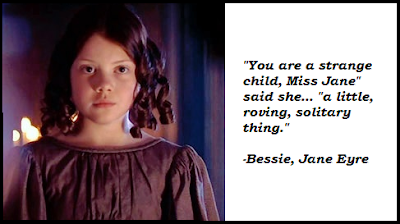 Jane Eyre, in popular culture, is often depicted as overly meek and mild - and really she's neither. She feels strongly, she stands up for herself and when she wants to (say, when she decides she wants Helen Burns for her friend) she can put herself out there and speak to new people. But she's still a shy girl at heart. Throughout her childhood her timidity and quiet ways make it difficult for her aunt and nursemaids to like or understand her - because she's different from them. She's different from Rochester too in that regard, but in tastes and sense of humour they've got a lot in common and he can look past her quiet exterior and see the real her. I like to think Jane Eyre shows that shyness doesn't have to be your downfall - some people won't 'get' you, but the people who matter won't hold it against you.