Some Favourite Christmas Scenes from Books 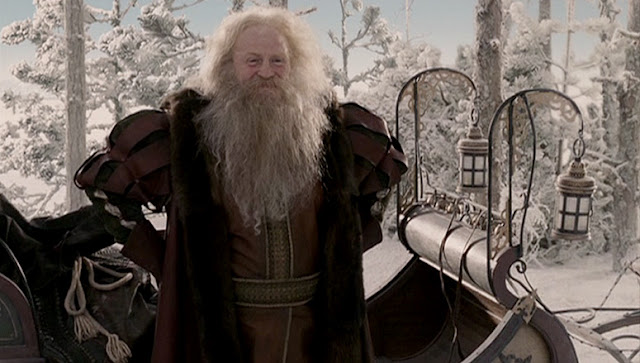 It feels like ages since I last posted and now it's practically Christmas. So, time for a Christmas post I suppose. I thought I'd share some of my favourite Christmas scenes from books, as seen in their adaptations. I tend to find that Children's books are usually best at creating that Christmassy feeling, especially as they bring with them the nostalgia of first reading them, but anything period drama is good too. Somehow Victorian times are just Christmassy by default.

Father Christmas comes back to Narnia

Probably my favourite scene in all seven Narnia books is when the Pevensies (minus Edmund) receive their gifts from Father Christmas. As Narnia under the Witch is supposedly 'always winter but never Christmas' the arrival of Santa means the tide is turning. This Father Christmas brings hope, plus better-than-usual presents. I also loved that Mrs. Beaver got a sewing machine (wouldn't that be difficult to work with claws?) and that they all got a tray of tea and crumpets (in the book.)


The Harry Potter series has some great Christmas scenes - I love the year they bump into Lockhart in St.Mungo's, and the year Harry gets his first proper family Christmas at the Weasleys'. But the most special has to be Harry's very first Christmas at Hogwarts, when he's surprised to get any presents at all. Bless his little heart.


This one's a more recent favourite of mine. I discovered the Poldark books last year, on hearing that there was going to be a TV series - and I loved them (barring one incident in book four that I try very hard to forget about). The above scene feature's Demelza's first Christmas in society, staying with Ross's family at Trenwith. In the book, she gets pretty drunk but still manages to impress the gathered company with some slightly risky song choices. They played it differently in the series, but it made for a lovely moment. The way Ross looks at her just melts your heart.

Christmas with the March family

I haven't got a particular Little Women scene in mind here but I just find it really Christmassy as a whole (the film anyway, haven't read the book since my mum read it to me as a kid - although I did read Good Wives recently.) I suppose the stand-out scene is when they give the poor Hummel family their breakfast at the beginning.True meaning of Christmas and all that.

Anne gets her puff-sleeved dress

It's the second time I've posted this clip (Matthew was in my Father's Day post) which is a bit odd considering I've never actually watched the Anne of Green Gables series. Think I'd find it a bit weird after loving Megan Fellowes as Catherine de Medici in Reign! Still, it's here because the moment Anne finally gets her dream dress is one of my favourite Christmas scenes in children's literature. Although I'm glad they made the dress blue here, and not brown as in the book. I always wanted to picture it as pretty, but brown with puffed sleeves? Wouldn't be my choice...

The Ghost of Christmas Present

I love The Muppet's Christmas Carol and  - as its source is the one Dickens novel I've actually read - I can tell you it sticks very faithfully to the book. Well,  Bob Cracthit wasn't originally a frog, but you know what I mean. My favourite bit is 'Christmas present' - the moment when Scrooge really starts to change. Generally this is the happiest part of the story (and happy is always better than sad, especially at Christmas) although I can hardly bear to sit through that scene where Scrooge watches his family play charades and they're so mean about him. Michael Caine just breaks my heart, it's awful. I also kind of feel like he's already learned his lesson by the end of his time with this ghost - the stuff the last spirit shows him just seems un-necessarily  harsh, but maybe that's just me. Anyway, I love this song.

What are your favourite Christmas scenes from books (or films?) I though I had more, but they seem to go out of your head when you sit down to write about them... Feel free to leave a comment and jog my memory! And Happy Christmas :D