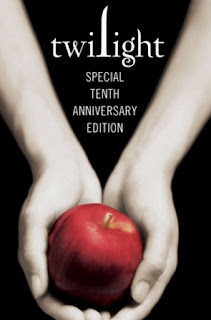 To celebrate the ten year anniversary of the first Twilight book, Stephanie Meyer has released a 'new' novel. I say new in inverted commas, because it's actually just a re-imagining of the original. Not from Edward's point of view (I don't think we're ever getting Midnight Sun, do you?) but instead, a gender swapped re-imagining of the story, where Edward is a vampire girl called Edythe (why not just spell it Edith?) and Bella is a boy called Beauford. Fun. I am tempted to buy it, just for the novelty, but essentially it's just going to be Twilight with different names inserted, right?

Twilight has become one of things that you either hate, pretend that you hate, or hide from the world that you love. The actual fans hardly dare to show their faces anymore for fear of being ripped apart by angry critics. It's not really fair - they're just books, after all. I'm not a die-hard fan but I've read all the books, and I really enjoyed them. That's including Bree Tanner and the leaked chapters of Midnight Sun. They're a bit trashy and teenage, but no-one ever said they were great works of literature.

In commemoration of the tenth anniversary then, I thought I'd do some mini reviews of the books and their screen incarnations:

If Stephanie Meyer had kept Twilight as a stand-alone, I really don't think it'd receive half the negativity it does. The early stages of Bella and Edward's relationship are the best bits of the series for me (when they're 'courting' as my auntie put it) and before she gets obsessed with the idea of becoming a vampire, Bella still has friends and a sense of humour. So does Edward, come to that. The mystery surrounding Edward, the novelty of meeting the characters for the first time and the strangeness of supernatural beings trying to fit in in the real world, all give the first Twilight an edge that the later books don't have. It's original and it's very read-able.

To address some of the main criticisms: Edward doesn't like to watch Bella sleep because he's a creeper, it's because, as a vampire, he doesn't sleep himself and it fascinates him. And Bella is creeped out by this, before she knows what he is. Also, why do people get on their high horses about the sparkly vampires bit? Vampires don't sparkle? Sorry to tell you this, but vampires aren't real. And personally I think it's a pretty clever way of getting around the whole going-out-in-the-daytime thing. Meyer suggests that the reason for that particular branch of vampire myth, is that vampire's tend not to go out in direct sunlight, as they sparkle in the sun and that would therefore blow their secret identities out of the water. Not totally plausible, but a good attempt, don't you think?


So what did I think of the film? Well, to start with, I think that the series as a whole could not have been adapted better. But the first film is probably my favourite. Directed by Katherine Hardwicke on quite a low budget, Twilight is a faithful adaptation of the text and generally well cast. I wish they wouldn't put lipstick on Edward (seriously, it looks weird) and Kristen Stewart needs to smile more. But they've got great chemistry and whatever you think of Robert Pattinson, on screen he is beautiful to look at. Twilight might have become a cultural phenomenon, but it's indie film qualities are still there. The soundtrack's good, they don't go mad with the effects and there's an understated humour that stops it from getting too dreary. It does bother me though, that there's some kind of blue filter on everything. I want to see some other colours please!

Generally, I like Twilight as a film - particularly that final fight scene in the dance studio with all the mirrors. Also,  like the book, I reckon it's the only film in the series that really works as a stand-alone.

The first sequel to anything is always going to be compared unfavourably to the original, so would it be weird to say that New Moon is my favourite Twilight book? When I first read the series, I found it really boring - I spent the whole time waiting for Edward to come back, and it took forever. But re-reading, I could enjoy New Moon for what it was - Jacob Black's time to shine. I wouldn't exactly say I was team Jacob, but I feel like Bella is a lot more fun around him. He's a good friend, he's normal (read: human) and he's flawed. And because he's younger than her and less serious, she seems generally more relaxed in his company. I didn't like Bella's whole 'my life is over' bit - it went on too long and it wasn't fair on Charlie. And I didn't like how Bella's 'visions' of Edward turned out to be just a figment of her imagination. I was expecting them to be Edward himself, watching over in some way. It was hard to believe that he left her completely un-protected, when he's usually such a control freak.  There are a lot of flaws in New Moon, but I liked finding out all about the wolves, and the Volturi are also a good edition - they broaden the world out nicely.

The film, again, is a faithful representation - and it still works (just) despite the leading man being absent for the majority of the story. They don't dwell for too long on Bella's depression, condensing the worst period into one scene showing the months passing, which is good. And despite not being a Native American, I think Taylor Lautner is well cast as Jacob (is it weird that I prefer him with the long hair though? He looks more manly somehow.) I liked that New Moon steered away from the weird blue tint present in Twilight, but it went sepia instead - probably intentionally -so we got warm colours for the wolves and cold for the vampires.  I thought the final scene was done well, very dramatic with all the red, but looking back, the special effects, particularly in the fights with vampires, are pretty terrible. 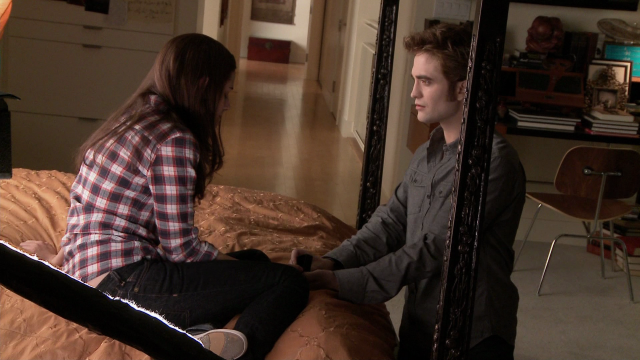 Actually, I take it back - maybe Eclipse is my favourite. Bella is happy again (thank God for that) there's lots of exciting Edward/Jacob tension, we get that adorable proposal scene and also more of the Cullens' back-stories.  But I do have some issues with this one. Although by the midway point, Edward is back to being his usual gentlemanly self, I hate him at the beginning of Eclipse. Why has he suddenly become this controlling nutcase? This does have some advantages story-wise, as it means we get to see Bella being a bit of a rebel - I love when she runs off with Jacob on his motorbike - but I hate thinking badly of Edward. This is also the book where Bella really gets into her general self-sacrificing nonsense, getting obsessed with the Quilluette legend of 'the third wife'. No Bella, you do not have to kill yourself. Stop being so weird. Also, I hate how she makes Edward choose between her and his family, during the final battle.  There's actually quite a lot of issues with this one, isn't there?

Film wise, this is a solid edition to series, although again, terrible special effects. Also the Bella/Jacob kiss is awful. Where's the passion? This is the moment Bella is supposed to realise that she loves Jacob as well as Edward -  so why does it look like he's kissing a rock? At least they did the proposal well. 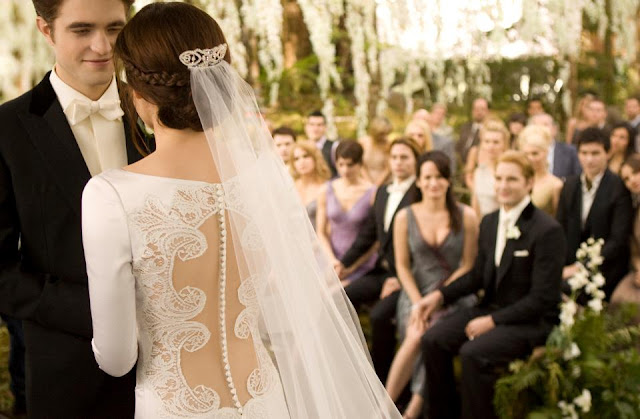 What can I say about Breaking Dawn that hasn't already been said? It was way too long, I had no interest in the second half at all really, and Jacob falling in love with a baby will never not be creepy. (Why couldn't he fall for Leah?) The name Renesmee did grow on me though! There were good bits to Breaking Dawn, and despite it's issues I didn't hate it.  I enjoyed the wedding, the lead up to it  and the honeymoon. The pregnancy storyline was also a good dramatic turn of events (although I liked Jacob less after having to read endless chapters from his point of view) and I appreciate a happy ending. Even if it did make for a big anti-climax.

However, I've still got some more ranting to do. A big issue for me was that Bella seems to have absolutely no compassion for her own parents. Doesn't she realise that Charlie will be devastated to hear that his daughter is dead? And Renee might be 'scatterbrained' but I don't think she'll be too thrilled either. And do you want to know something else? I hate Alice. Hate her. Bella's not allowed a look in on planning her own wedding? And apparently putting high heels and make-up on her while she was lying in agonizing pain mid turning (into a vampire) was a priority? Alice never had much character development, so I don't know why we're expected to love her so much. And okay, since Bella likes her for some inexplicable reason, maybe she can be maid of honour, but does Angela not even get to be a bridesmaid? She was a nice friend. My biggest issue though, possibly over the whole series, was Edward and the truck. Bella loved that truck. Charlie bought it for her. And Edward did who knows what to it, just because he thought she should drive something fancier? Nope, Edward. That is not okay.

So, the films. Personally, I liked that they split it in two. It worked. For the book fans (who were the only people really going to watch the films by this point) the wedding and honeymoon were the bits people were really looking forward to seeing. So why not drag them out? And although part two of the book is boring, there's actually a lot of plot in there. You do need a whole film to do it any kind of justice. For some reason Kristen Stewart's acting improved, and the CGI on Renesmee wasn't as bad as I had expected. And I think they came to a great compromise with the final battle scene - keeping the ending faithful while also giving us some action. Although, if you hadn't have read the books, you'd probably think they should have just fought the final battle anyway - I almost did myself. Surely the Volturi will be back one day? As an ending though, I thought that very last scene was lovely - with Bella and Edward back in the meadow? I'm embarrassed to say I even got a bit emotional.

So overall, The Twilight Saga is, in my opinion, worth trying. It's flawed, definitely, but there was a reason the world went mad for Bella and Edward. The films captured everything that the books were, and stayed faithful to the last - they were made for the fans and they didn't let us down. I feel like I've grown out of Twilight a little bit now, but I'm not going to tell you the series is no good, because I loved them once. And if Stephanie Meyer ever feels like finishing Midnight Sun, I'll be right on it.

Labels: As good as it gets Reviews Twilight Twilight 10th anniversary Twilight re-imagined YA fiction