So, I felt like doing a review today, and was straining my brain to think of something relevant to summer. As all I could come up with was The Sisterhood of the Travelling Pants (and I've done that one) I thought, why not go for something random, an old favourite. I watched Harry Potter 6 the other day, and I haven't actually reviewed a Harry Potter yet. So here goes.

I have mixed feelings about the Potter films. When I was younger my bordering-on-obsessive love for the books made me suspicious of the films and ready to nitpick them to death (why are Harry's eyes blue not green? Hermione's hair isn't bushy enough! Why didn't Mr. Weasley brawl with Lucius Malfoy in Flourish and Blotts?) but as I've grown older I've learned to appreciate that they can't follow the books word for word - they'd be way too long for starters. In fact they're all too long already - Chamber of Secrets is well over three hours when they put the adverts in.

I understand that some changes are needed to make the films more dramatic and concise, and generally I'm on board with the alterations made in Half-Blood Prince. Not all of them mind you. Book six might not be my favourite (that's Goblet of Fire, if you're interested) but that doesn't mean I don't have a few bones to pick. 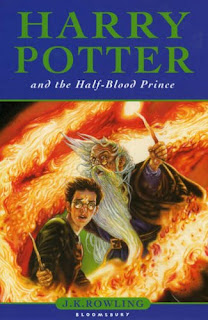 What I like best about book six, is that it gets back a bit of the light-heartedness lost in five. Harry is over his most angst-y stage, people don't think he's a raving lunatic any-more (although he actually is a bit of a nut in this one, developing a weird obsession with following Malfoy around) and you also get a lot of romantic-comedy type drama.

The film does a lot of this stuff really well. The Ron/Hermione/Cormac/Lavender love 'square' is great, and especially well handled considering that Ron/Hermione always has to fight for its life against the blatant on-screen chemistry between Daniel Radcliffe and Emma Watson. In the books I never thought that Harry and Hermione should get together, but in the films... I guess you can't predict whether eleven year-olds will have chemistry in the future, can you? 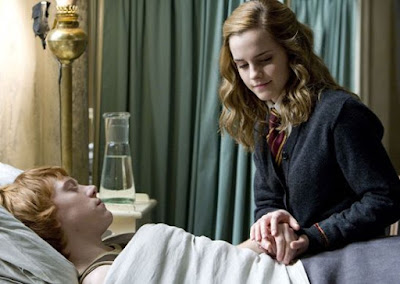 Which brings me to Harry and Ginny. Poor Ginny, the only true failure of the movie franchise. She's a pretty girl, and in interviews she seems animated and attractive enough. But seriously, Harry would have more chemistry with a block of wood. It's not entirely Bonnie Wright's fault - partly it's the terrible hair and make-up, partly the direction. All of the Ginny scenes are so awkward: feeding Harry a pie, tying his shoelaces, creepily leading him into the room of requirement and kissing him when his eyes are shut? The Harry/Ginny kiss  is done so much better on the page.

Even aside from the 'hormonal teenager' stuff though, the sixth Potter film manages to inject plenty of humour. One of my favourite scenes from all six films is when Harry takes the Felix Felicious. Daniel Radcliffe gets to show off his comic timing, we get a drunken duet between Jim Broadbent and Robbie Coltrane, and also a touching little scene, in which Slughorn talks about Harry's mother. I always think the fish-bowl monologue is a nice touch, although it's not strictly from the books. 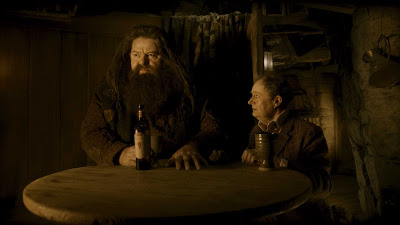 This film does prove that going a little bit off-cannon can sometimes work really well. In the book, for example, we have no clue what Malfoy's doing in the room of requirement (maybe some people guessed, but I certainly didn't.) In the film, we get some insight into his story as well as Harry's, and those sequences with the bird and the apple really notch up the suspense. I also like the scenes at the beginning - the girl in the cafe who flirts with Harry, the breaking of the bridge in the muggle world - they hint at some of the themes of this instalment (the romantic stuff, Voldemort getting stronger and becoming more of a constant presence) while adding something a bit unexpected.

Although I love these little touches, some of the bigger changes irritate me. Like burning The Burrow down. Just why was that necessary? I understand why they wanted an action scene in the middle of the film, but it was so randomly shoved in. Firstly, what the hell does Ginny think she's going to achieve running after Harry like that? Secondly, why is there is never another mention of this huge event? In the next film the house is standing again as if nothing happened. I can forgive the lack of battle at the end of the book (clearly they're saving it for the Deathly Hallows finale) but you'll never convince me that burning down Ron's family home was a smart decision. 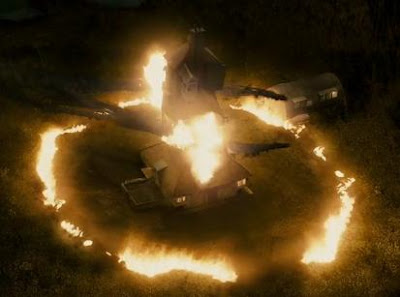 I could talk for days about the tiny differences between book and film, but in general I can see why certain things were culled (mainly because of time constraints, I'd assume). Still, I wish they'd included that scene in the hospital, where Mrs. Weasley and Fleur finally begin to understand each other ("All zese scars mean, is zat my husband is brave" etc.) I didn't cry when Dumbledore died, but I cried at that. And I would have liked to see the Lupin and Tonks reveal. And more of the 'pensive' chapters, where they flash back to tell Voldemort's story. And they could have actually cast an attractive Tom Riddle - the little boy does a great job, but the teenage Riddle is supposed to be handsome and charming? Apologies to the actor in question, but he was neither. Also he looked nothing like the guy from Chamber of Secrets.

Overall, Half-Blood Prince is a good addition to the Harry Potter series. The book gives us a few too many hormonal teenage moments (like that 'monster growling in Harry's gut' every-time he thinks about Ginny) but I love the lighter tone, all the flash-back chapters and the ending is pretty epic. The film, as usual, is a bit over-long (and why do all the later films have that dark tint to them? They literally get darker) but the acting is great as always, the ending is dramatic and there's plenty of humour. One of the best.

The book - Great. Aren't they all?
The film - One of my favourites - I just wish they'd re-cast Ginny.

Rating: Good...until that part (purely because of burning Burrow)