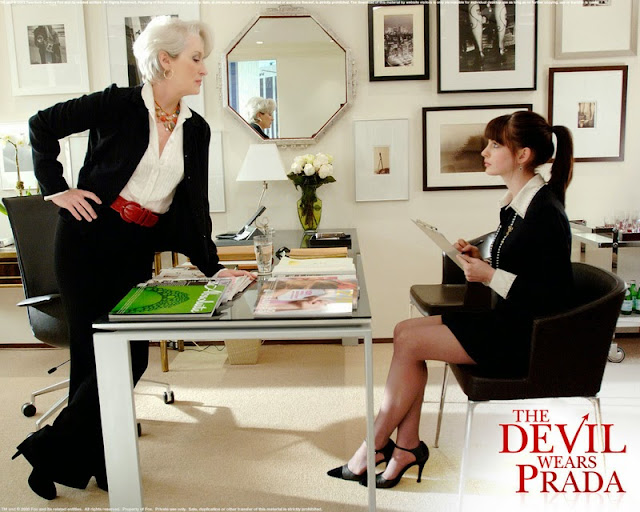 So I was in a second hand bookshop in Sheffield and I finally picked this up. I'd been meaning to read it for a while and for 50p, why not? The Devil Wears Prada is the best-selling first novel from Lauren Weisberger, a semi-autobiographical tale of a twenty-three year old college graduate who takes her first job as assistant to America's most infamous magazine editor. A film followed fast in 2006 and now apparently there's going to be a musical. Crazy times.

I'm going to be honest, The Devil wears Prada has never been one of my favourite films. It's a great premise, Anne Hathaway (still in her likeable phase) is perfect as fish-out-of-water Andy and Meryl Streep makes Miranda Priestly (the devil of the title) complex and human. But I always find that there's something vaguely depressing in a story where the message seems to be 'ambitious girls have miserable lives.' I know that's not the intended moral, but it gets me all the same. Just to clarify, I'm mainly talking the film here - the book's message was more along the lines of 'first jobs are God-awful.' 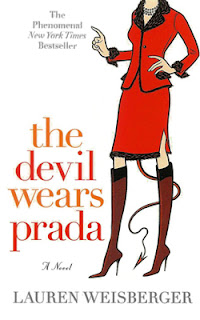 Although there's a lot of things that I prefer about the book (I'll come to 'the boyfriend' later) I would definitely say that the story works better as a film. Firstly, because the book gets repetitive. Andy is in the office again, she'd dealing with some ridiculous Miranda problem again, her plans are disrupted again, she feels judged eating soup because it has too many calories again.  I realise that  this is because the book is based on real experiences - a culmination of the author and her friends' horrendous first jobs - but it doesn't always make for interesting reading. Weisberger worked at a fashion magazine herself (many have suggested that Miranda is based on American Vogue editor, Anna Wintour) and of course she must want to record it accurately. But the film brings more structure to the story and  puts emphasis on the most memorable bits of Andy's life at Runway. 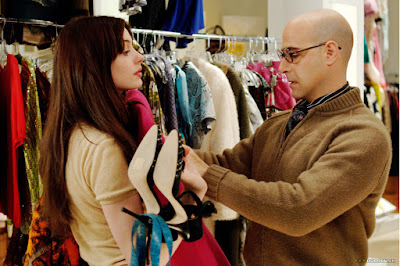 Now most people will tell you that Meryl Streep is the element that makes this film great. Although I'm not denying her greatness, they're wrong. What makes this film great is Stanley Tucci (with a bit of Emily Blunt thrown in.) Tucci's character, as written, would have minimal screen-time but he has somehow become the heart of the film. Andy's only friend at Runway, Tucci is a mixture of book characters James (a gay fashion assistant and friend of Andy's at work) and extroverted Nigel, the only person who can tell Miranda exactly what he thinks - if only when it comes to her clothes - and speaks only in capital letters. I was a bit disappointed when the sensitive and smart Nigel of the film didn't show up on the page, but I can see exactly why they added him. He gives the film a lot of its warmth.

Emily Blunt is great too, in her breakthrough role as bitchy 'first assistant', Emily. Although Emily isn't English in the book, Blunt plays her very much as written - but her star turn makes the character one of your favourites. Much better than Andy's so-called friends anyway. 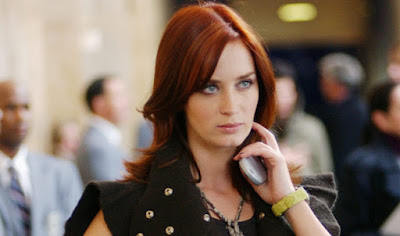 Andy's friends - and boyfriend - are my main gripe with the film. Which is why I was pleased to learn they weren't nearly so detestable in the book. Nate - the sulky, un-supportive supremely hate-able chef is nowhere to be seen in the novel. Alex, the book boyfriend, although going through essentially the same story arch, is much more likeable. He's a teacher in an under-privileged school in the Bronx, who has a life outside of Andy (they don't live together in the book either) and only becomes a bit on the annoying side after putting up with a lot. Nate is an idiot from very early on,  Alex at least tries to be supportive. 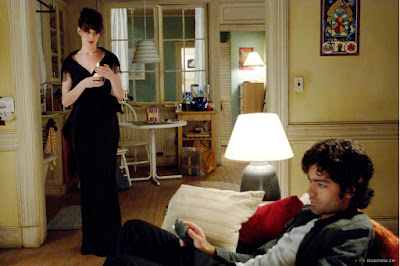 Then there's Lilly - in the film, a self-righteous, judgemental 'artist' (that scene where she sees Andy talking to a guy that's not her boyfriend and gets up on her high horse without letting her explain? Grr!) in the book a masters student in Russian literature who spends most of her time drinking, sleeping around and sliding into a full blown quarter-life crisis. Book Lilly is damaged and troubled - but she's a lot more fun and a much better friend to Andy, even though she's got so much to deal with.

And I can't talk about her friends without mentioning that scene with the phone - playing piggy in the middle when they know how easy it is for her to get fired? When they know that this job can open so many doors for her and her boss is a nut-case and she just brought them thousands of pounds worth of goodies? And then judge her for getting annoyed about it? I hate them! 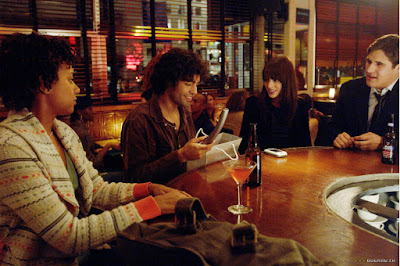 I think the thing that bothers me, both in book and film, is that Andy only has to stay there for a year. One year, and it will make so much of a difference to her future career. One year and not one person ever says stick at it, you're doing well, just a few months to go and then you'll have a reference that'll get you where you want to be? No. All they say is wah wah, we never see you, wah wah. If you ask me, it seems like she makes a lot of effort to spend time with the people she cares about. It's not like she's got kids - she has a boyfriend that's almost as busy with his own job and her parents live halfway across the country anyway. Why can't she be a bit selfish with her time? I know she's hating every minute, but it's her choice to be in this job. Plus, she needs the money!

So I should probably stop ranting now. To sum up, the book was a quick read, the film is a comfortable watch and it always makes me want to get a fringe cut (it'd be a terrible idea, but I can't help fantasising it'd make me look like Anne Hathaway.)  And despite all my whining I do get it. The point is that you should work to live not live to work. I get that - I'm too lazy ever to be a workaholic anyway. The book is a fascinating insight into the world of fashion magazines and the film brings it all to life with fantastic performances and great clothes (although I still think some of Andy's 'good' fashion choices are questionable - the flat cap?) All in all The Devil wears Prada is worth wasting a bit of your time on. Personally though, I prefer Ugly Betty. 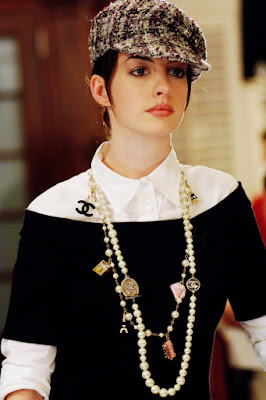 The book: An easy read with good characters, but a bit repetitive.
The film: A good film, with some great actors, but a bit of a downer towards the end.