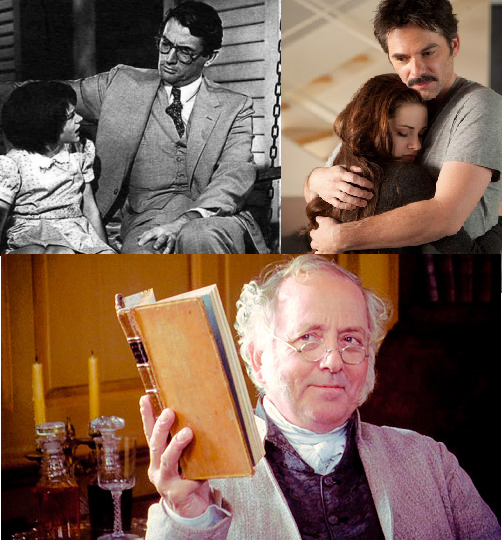 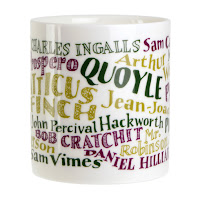 So it's Father's Day today (in the UK anyway) and as one of my Dad's presents, we got him this mug over at the theliterarygiftcompany. On closer inspection, however, some of my favourite fictional fathers are missing. So I thought I'd make my own list. These guys aren't always the world's best dads, but they love their kids and we love them. (Warning: Some clips include SPOILERS.)

So this is the obvious one. Atticus is the model father, kind, morally courageous, always setting a good example for Scout and Jem in practice as well as in word. Yet he doesn't seem like the coolest Dad - right up until the moment he shoots the rabid dog. They didn't know their father was the best shot in the county!

A few years back, J.K Rowling admitted she'd considered killing off Arthur in Order of the Phoenix, but didn't want to deprive us of another father figure. There are plenty of those in Harry Potter, both good and bad, but Mr. Weasley is special. Always kind and enthusiastic, he is willing to stand up for what he believes in despite what other people might think, and is loved and respected by his children despite his eccentricities. I think we're all relieved he was spared.

Despite being the first famous father that came to my mind, Mr. Bennet wouldn't win any 'greatest dad' contests. He's neglectful of his children, not just in failing to put some money aside to provide for them, but in plenty of everyday instances (and he should've known better than to let Lydia go to Brighton.) Yet despite his failings, he's a good man, he loves his girls and his relationship with Elizabeth is one of the most touching father/daughter bonds in fiction. Plus, he makes me laugh.

In my opinion, Charlie is the best thing about Twilight. The relationship between Bella and her dad is unconventional but sweet - two shy people of different generations and genders, who have spent minimal time together throughout their life and who suddenly find themselves living together. Despite his reserve, it's obvious how much Charlie loves his daughter - particularly in the films, where Billy Burke plays the part to perfection.

(Go from 8:12 for clip) When widower Tom Oakley is asked to home a London evacuee for however long the war might last, it doesn't seem like an ideal situation.  But a bond soon grows between the grumpy village recluse and the little boy with the unhappy past. Although not technically his father, we can all see that Mr. Tom and Willie Beech should be allowed to stay together.

Another surrogate father, Jean Valjean might be on the run from the law, but he still finds time to adopt a mistreated orphan girl and grow to love her like his own. And when she finds love later in life - instead of barring all contact with the boyfriend who will take his daughter away from him -Valjean risks everything to keep Marius safe for the sake of Cossette.

I've never watched the T.V series, but I was re-reading Anne of Green Gables the other day and remembering how much I love Matthew. A painfully shy man, particularly around women, Matthew takes a shine to the orphaned Anne from the first and - despite being a confirmed bachellor - finds himself well suited to fatherhood. The day he buys her the dress with the puff sleeves (that she wanted so much) is one of my favourite moments in the novel.

A self made Irishman and the proud owner of Tara (the family plantation) Gerald is good-hearted, loud mouthed and - although not particularly sensible - not without some words of wisdom. If Scarlett had paid more attention to the above speech, her story might have ended very differently. One of my favourite scenes in the book also involves Gerald, in which he comes to gives Scarlett a talking to (over the whole Atlanta bazaar business) and Rhett gets him drunk instead. It's a shame they missed it from the film!

Yes, he's a dog. But Pongo is also a great dad. Being a parent to a litter of fifteen can't be easy, especially when they're stolen by a madwoman with a penchant for fur coats. Pongo and Perdita (or Missus, in the book) travel halfway across the country and pull out all the stops to save their family. Their reward? Another 80 odd kids to look after.

And to finish, here's the iconic clip from The Railway Children. Bobby and her siblings would never had experienced life by the railway if their father hadn't been wrongfully imprisoned, but his return is still something to celebrate. I always feel sorry for the younger two kids at the end of this film (the dad meets Bobby then apparently needs alone time with the mum) but really the scene is perfect as it is.

So, is there anyone I missed out? Who are your favourite literary dads? And Happy Father's Day to all the real dads out there, who I'm sure are just as lovely as this lot.