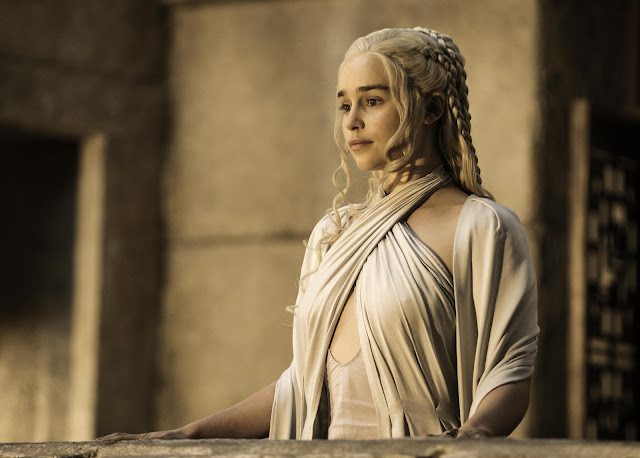 Game of Thrones series five is coming to a close (I can't believe it either) and since I can't bear to think about a certain part of last night's episode (I've been team Stannis for a whole series now - just why??) lets talk about Daenerys instead.  But not dragons, since that terrible CGI was almost as painful to watch. Pretty costumes will make us feel better, and Dany has worn a lot of them.

Daenerys Targaryen has gone through one of the biggest transformations on the show, from princess in exile to Khaleesi, then mother of dragons, breaker of chains and the reigning queen of Slavers Bay. Her costumes have changed from series to series, reflecting her character's journey from victim to major player in the game of thrones. And she always looks great.

At the beginning of series 1, Daenerys was very much under the power of her horrible brother. She wore mostly pastel colours, in sheer flowing fabrics. She's still an innocent and her look reflects this. It's very 'princess in the tower' - flowing hair, feminine lines - her clothes emphasise her beauty, not her strength (she has little of that at this point, at least on the surface.) Despite the virginal look created by the flowing hair and the pastels, her outfits still hint at the way she's objectified. Her brother basically sells her to Khal Drogo after all, and is pretty creepy around her himself. Her dresses are low cut, or see-through and - although arguably she shows less skin than in her Khaleesi phase - she's not owning her sexuality in this case. You feel she's being dressed up to impress the men.

In fairness, it is a hot country. The climate and look of the place also allow the costume designers to bring in lots of Greek and Roman influences. 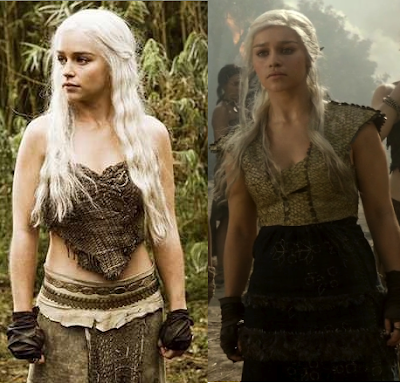 When Daenerys marries Khal Drogo everything changes. She has a new family now, a new culture, new codes to follow and people to please. Still, being a Khaleesi suits her better than life as a Princess. With her new braided hair and tribal attire, Daenerys begins to reveal that inner strength. She works her marriage to her advantage and embraces the freedom from her brothers it brings. She's still dressing to fit in, but this is the beginnings of the Daenerys we know and love.

During her pregnancy she obviously ditches the crop tops in favour of a more matronly look, signalling that she's growing up. But that's not all - notice that this is the point where the dragon influences begin to creep in? The top above patterned with scales and ridges? She's about to become a mother, but a different kind than we expect. 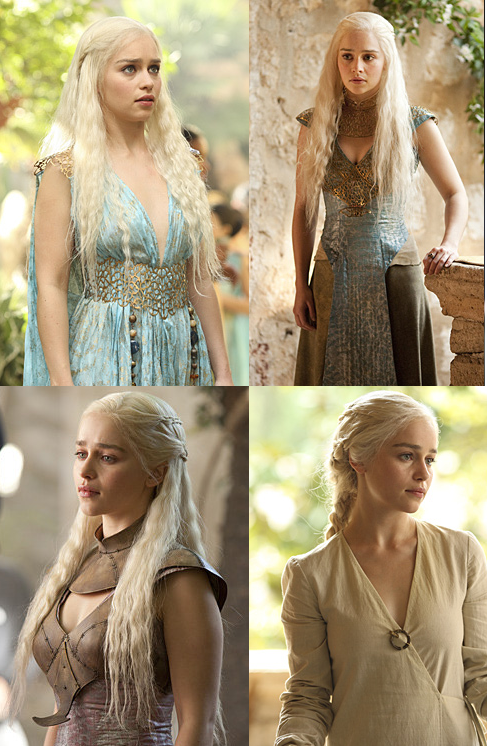 Series two brings us Daenerys's most boring story-lines to date, but some of her best outfits. After walking the dusty desert for what feels like forever (to the viewers too) she and what's left of her Khalasaar are taken in by the Quarthians - a merchant-like people who dress fancy and are all-around un-likeable. Dany wants something from them (ships, money) and seems to like the idea of wearing nice clothes again, so she begins dressing to impress.

Daenerys's old look - flowing and feminine - fuses with her new. She still puts braids in her hair and retains a little of the warrior-girl look she picked up as a Khaleesi. Quarth makes it's mark as well, bringing bright colours, bold shapes and eastern influences. I always feel like Quarth is a step backwards for Daenerys, her leadership is faltering, she doesn't seem to know who she is any-more. But in the long run it's a big stepping stone for her (and not just by bringing brights to her wardrobe). She emerges from series two stronger and more 'herself' than ever before. 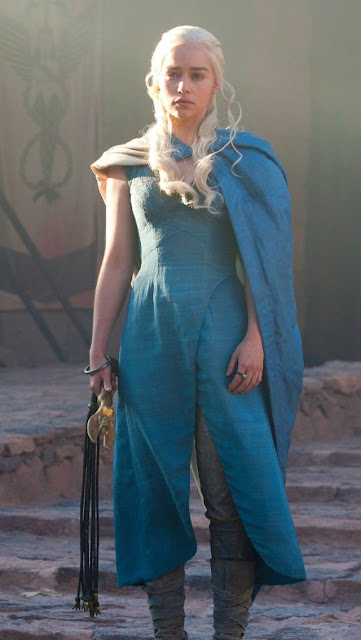 Series three is the moment when Daenerys begins to really establish herself as a force to be reckoned with. She's got herself a ship, some good councillors and her dragons are getting bigger. Time for an army. Daenerys in the blue dress  - with her dragons in the sky and an army of unsullied behind her  - is probably the defining image of Game of Thrones. She's a leader of men now and although her clothes still have feminine influences, they are much more practical. She's doing a lot of travelling after all. The bold, blue dress is very different from the pastels and browns she's previously worn - it's regal, commanding and it makes a statement. She's a leader now, so she needs to stand out. 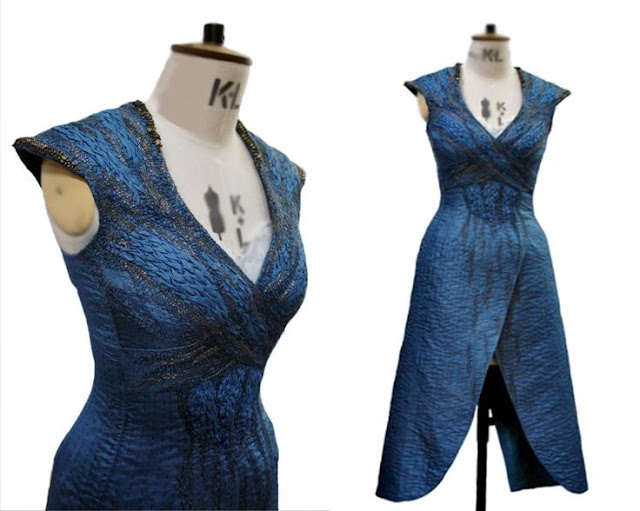 Her dragons are ever present in her clothing too. Chief embroiderer on Game of Thrones, Michele Carragher, makes sure that the dragon-scale motif is woven seamlessly into Daenerys's outfits. For more of her work look here: http://www.michelecarragherembroidery.com/Daenerys-Dragonscale-Gallery(2880136).htm - the woman is a genius. 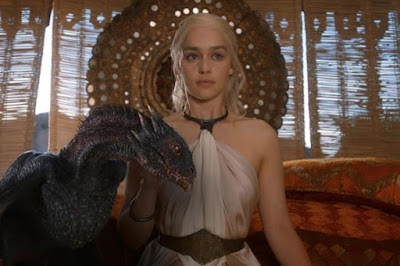 With the unsullied behind her, Daenerys now takes on the masters of Slavers bay. Her plan: free all the slaves and take the cities for herself. She's thinking like a queen now and begins to dress like one. She's back in her flowing dresses but as she moves into the Ancient Egyptian-esque world of Slavers Bay, the softer Greek and Roman styles make way for sharp edges, and plate jewellery. 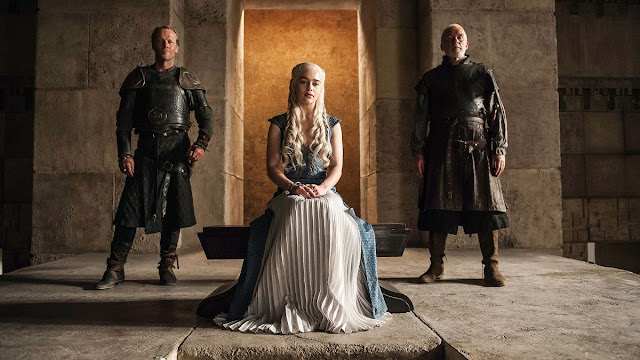 Series four saw Daenerys free more slave cities, before settling down to rule in Mereen. Urgh. Just get to Westeros already. Life as queen means more formal, flowing dresses (although she always wears her blue when she's busy conquering) more dragon inspired patterns. And she seemed to discover a fondness for pleats? 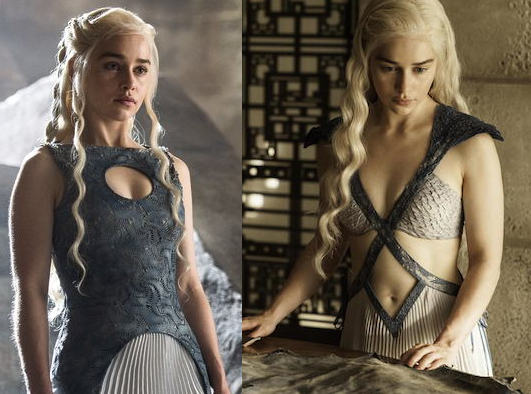 So, on to this series. She's still ruling in Essos but there've been some subtle changes. No longer the confident and revolutionary young conqueror, Daenerys is settled now, although her people are not. She's trying to keep everyone happy and not rock the boat, which means she's beginning to conform to traditions. Coincidence, then, that her clothes are becoming more traditional, more queenly and mature? Does the white signify that she's trying to remain neutral? Seriously, so much white. She's like, totally abandoned her signature colour!

In light of what happened last episode, I'm also inclined to see hidden meaning behind the shape of her sleeves this series - would you call them winged?

Daenerys is a great character and (as her costumes show) her development over the series has been huge. But she's still got a long way to go to reach her ultimate goal. Lets hope that one day, her official titles will include 'Queen of the Seven Kingdoms.' Although she may die before then - you never know with Game of Thrones. 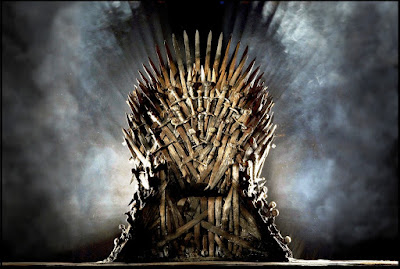