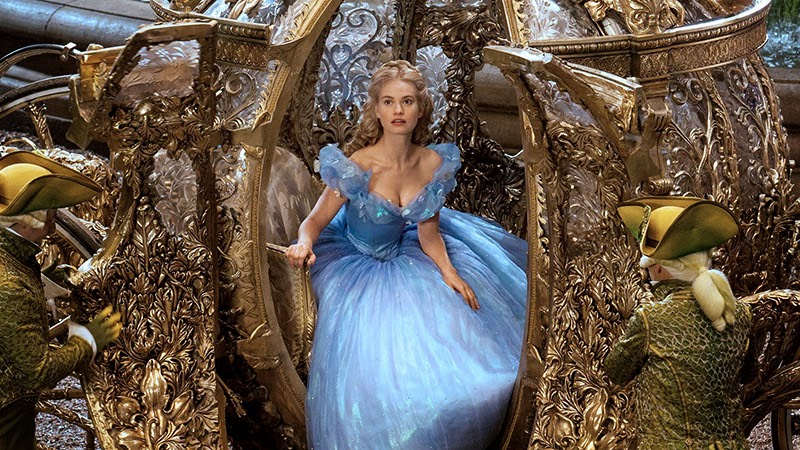 Everyone's been talking about Disney's new Cinderella - a lavish adaptation of Charles Perrault's fairytale and a re-make of the 1950 animated classic. Directed by Kenneth Branagh, the film is visually gorgeous and played totally straight - no irony, no twists in the tale, just standard fairytale fare with plenty of old-school glamour.  Yes, it has its flaws. It was sickeningly sweet at times, (definitely more so than the cartoon) and Robb Stark (Richard Madden's gorgeous Prince 'Kit') can't dance to save his life. But other than that I thought it was lovely. Cate Blanchett was particularly good as a very wicked Stepmother. We've seen it all before but it's a formula that works, and to prove it I've gathered together some of my favourite Cinderella re-tellings.

In the all the promotion for the 2015 re-make, its successor has (in my opinion) been unfairly treated. This Cinderella is much sassier than Lily James's interpretation, the 'cutesy' animals provide genuine laughs and the songs are lovely. A classic that can never be replaced.

Originally written as a made-for-TV movie starring Julie Andrews, the 1997 remake is very nineties but wonderful. There are some great songs - from the writing duo that brought us The Sound of Music  - and sung by the likes of nineties popstar Brandy (Cinderella) Whitney Huston (as the Fairy Godmother) and Bernadette Peters (as the Stepmother).

Told mostly from the Prince's point of view, this is a big budget affair with music from the Sherman brothers (The Jungle Book, Mary Poppins) and a starry cast - at the time anyway. In the grand tradition of musicals from this era (Mary Poppins, Bedknobs and Broomsticks, Oliver!) it is over-long and the dance numbers are way over the top. But it's fun, the songs aren't bad and they develop the story of Cinderella quite nicely. I especially like how it goes on beyond the moment she fits the slipper, and shows the opposition that she might face in setting her sights so high. Worth a watch.

In this modern re-telling of the story, Hilary Duff's Sam Montgomery lives with her wicked stepmother (Jennifer Coolidge) and stepsisters who force her to sleep in the attic and work in her Dad's old diner to raise money for college. Sam gets her Cinderella moment when she decides to meet her secret online flame at the school dance, and he turns out to be no other than Austin Ames, the most popular boy in school. This film is your typical teen chick flick of the early 2000's - Sam leaves her flip phone at the dance rather than a shoe, Chad Michael Murray plays the lead, and there's an empowering twist to the tale, where Sam must save herself rather than wait for the Prince. It's cheesy, but you can't not like it.

My favourite Cinderella film has got to be this one, in which Drew Barrymore stars as the spirited Danielle, enslaved by Anjelica Huston's jealous stepmother and courted by Dougray Scott's arrogant but attractive Prince Henry. There is no fairy godmother or pumpkin carriage, but the costumes are beautiful, the leads have great chemistry and Danielle is an admirable heroine, despite her terrible English accent. Ever After just does enough differently to make it individual, while retaining all the elements that make the story a classic.

So, did we really need another Cinderella? Not really. Did it bring anything new to the table? Not at all. But it looked lovely, it was enjoyable and it' s worth a watch.