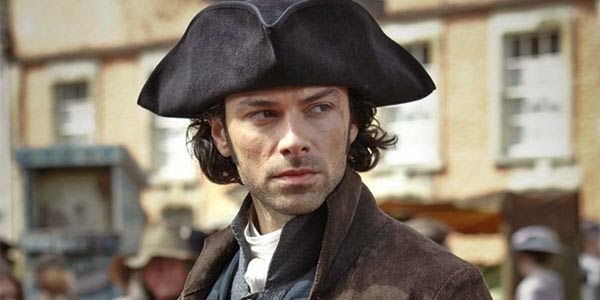 Film or TV? - Film
Famous or Obscure? - Famous (because of the 70's series)
Better on page/screen - Haven't decided yet!

** Mild spoilers of episode one **

The first episode of Poldark - an adaptation of Winston Graham's novels and re-make of the successful seventies TV series - debuted last Sunday night. Starring Aidan Turner (The Hobbit, Being Human) the series will cover the first two novels: Ross Poldark and Demelza over the next seven weeks. I'm looking forward to Sunday already!

The opening episode introduced us to the eponymous Ross: a Captain during the American Civil War, he returns home to Cornwall to find his sweetheart engaged to his cousin, his father dead, and the family mines and property fallen into disrepair. Basically he has a lot to deal with, but he throws himself into getting things back on track, setting the scene for the rest of the series.
The Ross of the novels is a complex sort of hero - brooding, reckless, principled, but not always that good. He follows his own code but you won't always agree with him (a bit like Sharpe I guess). Yet so far, Aidan Turner has kept us firmly on his side. It's a big task, to live up to his predecessor (Robin Ellis, who plays a small part in the re-make as a judge) and do justice to the hero of the novels, but Turner really looks the part and I reckon he's going to pull it off. Also, that voice!


So far, the series appears to be sticking quite closely to the novels - the first two of which I read last summer, while on holiday in Cornwall (around the time the series was filming, although we never saw them, sadly.) However, there are some minor differences.

In the prologue to episode one we see Ross in Virginia, during the war, which is an addition but not one that goes against the canon. I guess it was there to give us a glimpse of Ross the soldier - although the bit of fighting we actually saw wasn't that impressive (he got hit in the face, hence the scar) the audience might have felt short-changed if we'd never seen our hero in combat. He's 'Captain' Poldark after all. The flashbacks that followed also helped in establishing his relationship with Elizabeth. 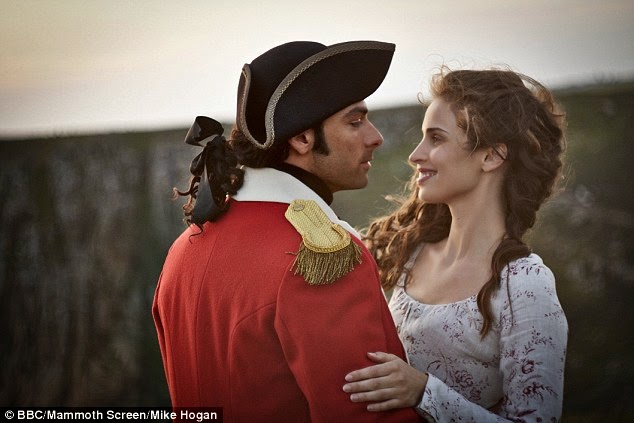 The most obvious difference to the books was in the depiction of Elizabeth and Francis's relationship. In the book Elizabeth is torn, when Ross returns, but she genuinely loves Francis at this point. In the adaptation it seemed as if she was forced into marrying him. 'TV' Francis seems sweet, but not believable as a rival to Ross - 'book' Francis has a bit more about him. That bothered me slightly, but I enjoyed the portrayal of Elizabeth. I'd had some concerns at her not being blonde (petty, I know) but she was pretty, she was reasonably sympathetic and I think she'll make Demelza a good rival. 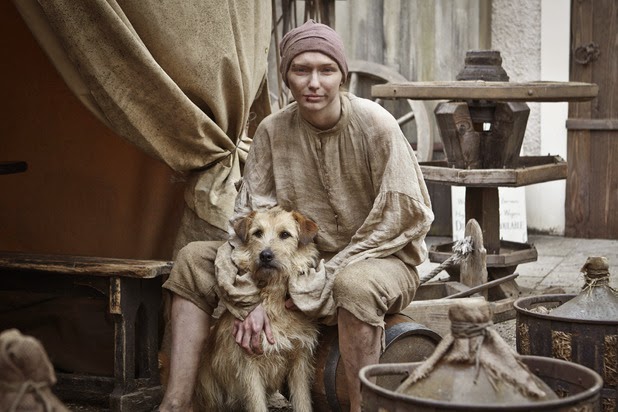 As to Demelza herself, I'm yet un-decided. The character, I'd assume,  is around sixteen in episode one - I'm guessing due to a more compressed time-scale. In the novels she is twelve or thirteen when Ross takes her in and  seventeen by the end of the first book. I'd say Eleanor Tomlinson was too tall for everyone to be calling her 'child' and pretending like they can't see she's a grown woman, but otherwise she looked the part and her accent wasn't terrible. Most importantly, she's likeable, which she needs to be, since everyone loves Demelza. I was confused at first as to why they'd dyed her hair red (the Demelza of the books is a brunette) but presumably it's to pay homage to Angharad Rees, who played the character in the original series. 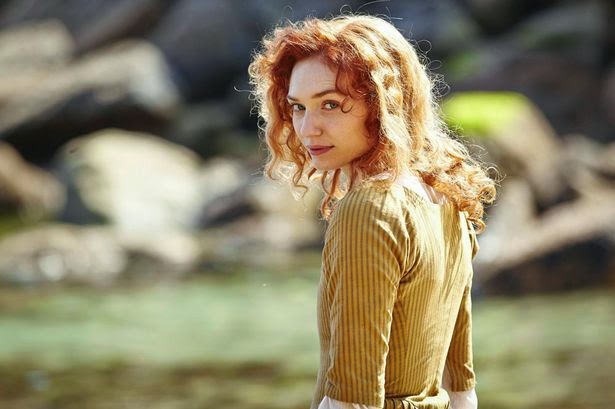 Overall, everyone seems pretty well cast (although Francis and Warleggan look way too alike and  I'm still on the fence about Verity) but the real show stealer is the location. Cornwall is beautiful, of course, but there were possibly a few too many shots of Ross riding his horse along the cliffs or gazing out across the landscape. The Cornish tourism board must be loving it. 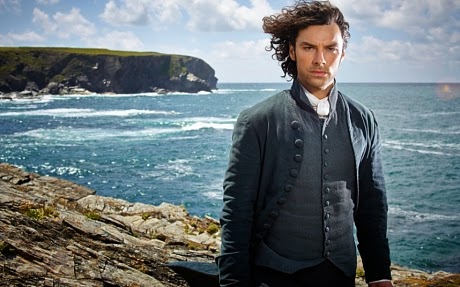 All in all Poldark got off to a good start, although this first episode mostly set the scene for what is to come. A story of romance, social change, rebellion, it's got plenty of potential, and I'm sure the series will deliver. Meanwhile I'm back on the books - halfway through the third one now and racing through it. Written over a huge time-scale (the early books were written in the 40's, the later ones  into the 2000's) the period setting means the novels haven't dated (much) although there are a few issues that might have been treated a bit differently today. And they're really good!

The Books - Quick reads, good characters... but sometimes I skip the mining talk.
The Series - Good so far, if a bit too much scenery.