It's been a while since I did a costume post, but this one has been on my radar for a long time and as series five will soon be upon us (so excited!!!) I thought i'd get it out there. If you've read any of my previous posts, you'll know that I'm a big Game of Thrones fan (although I'm still resisting the call of book 4 - I will wait until the series comes out, I will!) and it's undeniable that the costumes in the HBO series are some of television's best creations. Taking inspiration from the wealth of detail on character and the world of Westeros that the books contain, costume designer Michele Clapton and master embroiderer Michele Carragher have worked to make the world of the TV series as vivid as George R.R. Martin's imagination. There's too much genius in the GOT costumes to fit into a single post, so I thought I'd do a few. This first one's on the Starks and the northern lot.

Starks and the North 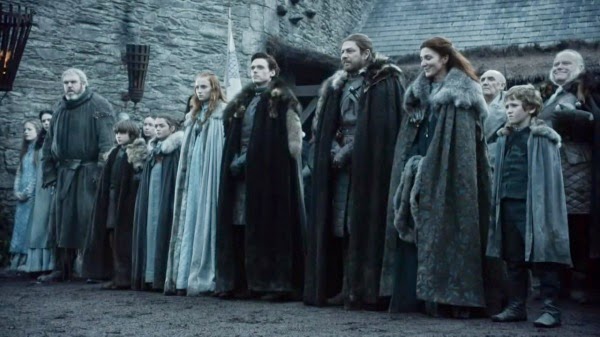 It's grim up north, and to quote the Stark motto 'winter is coming.' So costume wise, we're obviously going to be seeing a lot of fur edged cloaks and dark colours.  As the Starks are straightforward, honourable types their way of dress is not too flashy or ostentatious. Poor old Sansa hardly ever gets to wear bright colours. Although her style of dress does develop as the seasons go on...

Sansa's clothes go through a development process as not only is she ageing from a child to a woman, she also moves from the north to the south. Her clothes become more grown up and although she sticks to Stark colours the styles subtly change. While in Jofferey's power her clothing tends to be quite loose and nondescript. When spending time with the Tyrells she dresses a bit more brightly and her clothes are more decorative. When she marries, she changes her house and her position, and again her clothing reflects this. Sansa's wedding dress is a masterpiece of embroidery,  incorporating entwined Lannister lions, Tully fish and Stark wolves. 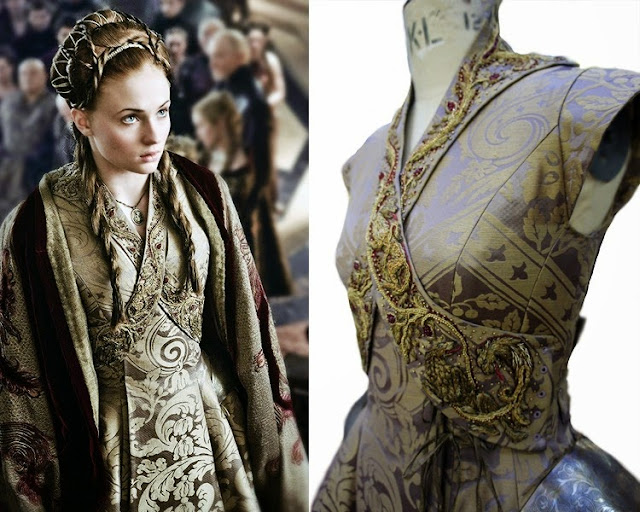 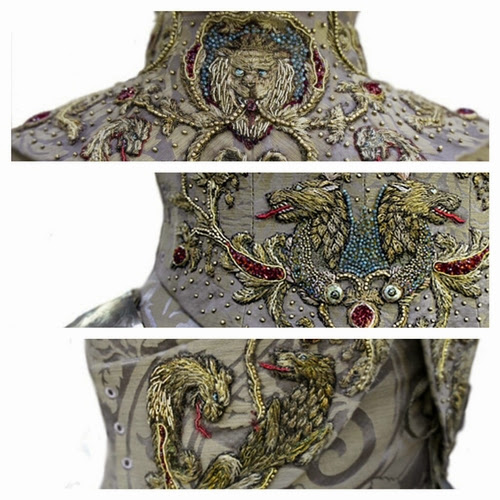 For more of Michele Carragher's gorgeous embroidery have a look here:  http://www.michelecarragherembroidery.com/index.htm 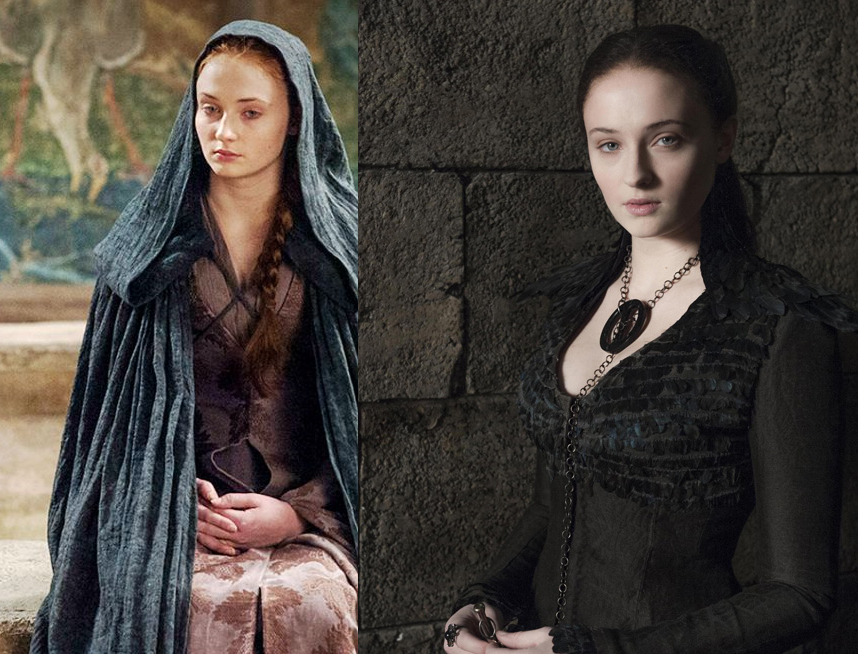 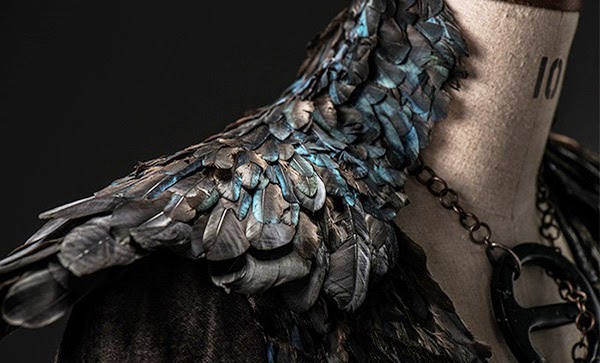 Series 4 sees Sansa break out from King's Landing and into a whole new host of troubles at the Eyrie. Disguised as 'Alayne Stone'  (above left) Sansa is no longer a little lady of the court but a young woman in trouble. Her sober plait and billowing cloak make her appear less frivolous than before. Once at the Eyrie she also wears a lot of blue - Tully colours - as she is back with her mother's people (Lysa and Littlefinger both grew up with Catelyn). As the object of Littlefinger's affections Sansa now has a more adult look - the biggest change occurring when she allies herself with Littlefinger, emerging in a black dress with an adornment of feathers. Littlefinger has taken the mockingbird as his sigil, and so the feathers connect her with him. The black indicates she has gone to 'the dark side.'

Like her sister, Arya Stark gets a dramatic change in wardrobe. From little lady Stark to Arry the orphan,  Lord Tywin's page (or Lord Bolton's, in the books) and the Hound's travelling companion. We know her best as a scruffy child with cropped hair and a sword in her hand, but even while at Winterfell Arya's clothes hinted at her tomboyish nature. 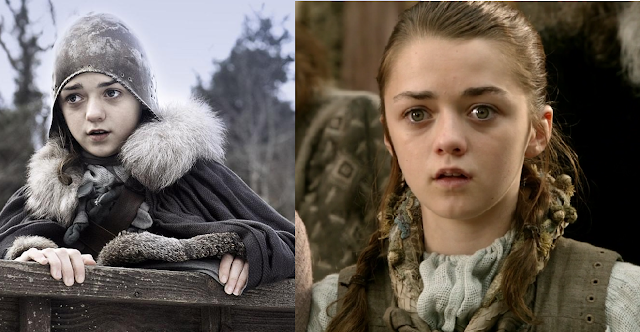 Looking back at Arya of series one - the plaits, the fur lined cloaks, the little helmet-like cap - makes you realise how much the character has lost. Her innocence, all traces of luxury or comfort - she lost it all when they chopped Ned's head off. So depressing. Now she's a hardened little warrior with the clothes to match. 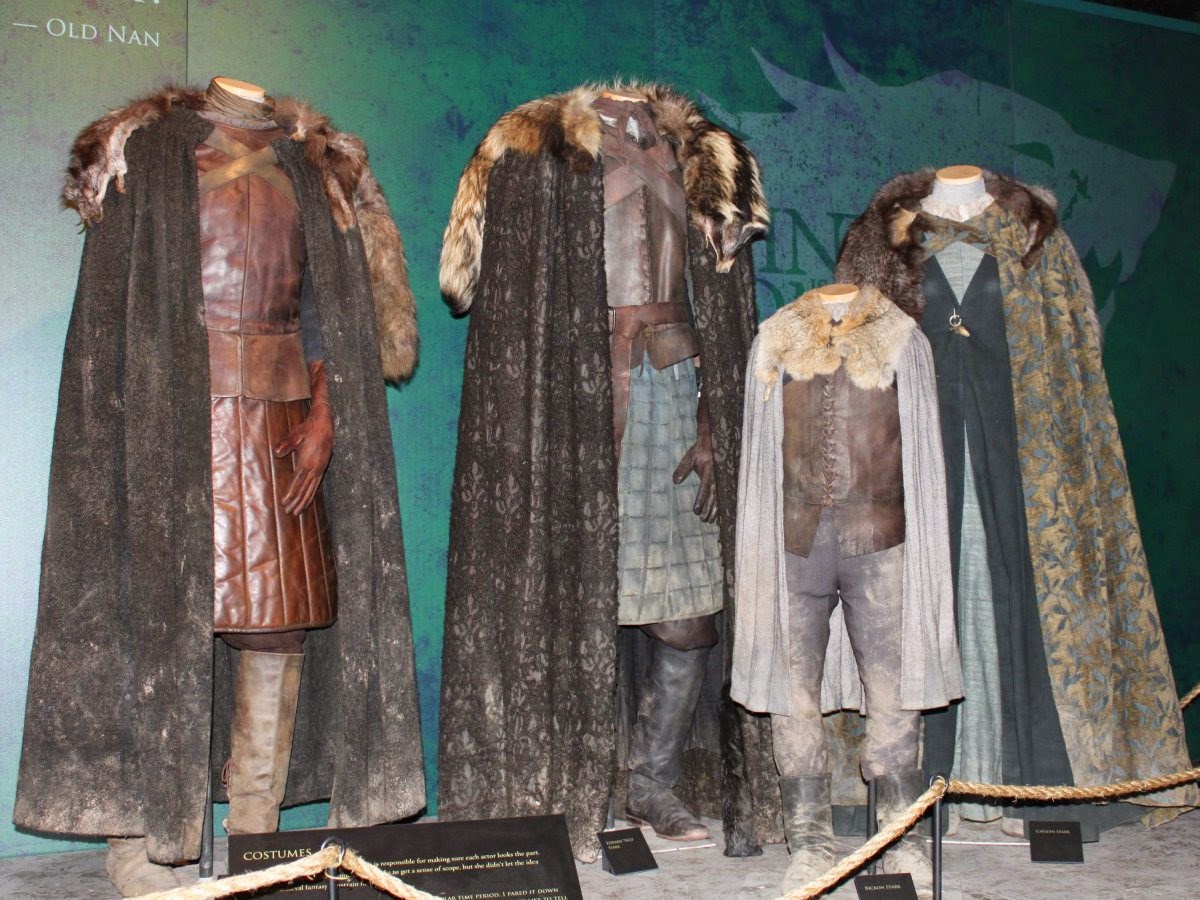 The stark men tend to wear dark, fur-lined cloaks with leather tunics, belts and gloves. The crossover straps of these capes (above) give them more masculine edge, but the cloaks themselves are surprisingly decorative when you look closely. Ned also gets a subtle change in wardrobe when he moves to King's Landing - more uniform, buttoned up, brown Baratheon tones rather than Stark grey -  he begins to look like the King's hand rather than a lord in his own right.  The new clothes add to the impression that Ned is out of his comfort zone. Originally a Tully, Ned's wife Catelyn has different influencing factors on her clothing. The Tully's come from the Riverlands  which means a lot of blue and flowing lines, and as their sigil includes the image of a fish, this is also incorporated into many of the designs. The Tullys are less wild than the Starks - Sansa would probably say more sophisticated - and so Catelyn's clothes are more decorative, somehow more 'southern'.

I should probably also talk about John, but there's not too much to say - as a member of the Night's Watch, he basically just wears black. The Watch's clothes are usually leather or other thick, hard-wearing materials to keep out the cold in the most northern part of Westeros. Still, as the nickname for night watchmen is 'crows' I love the way their black fur cloaks give the impression of a crow's feathers. 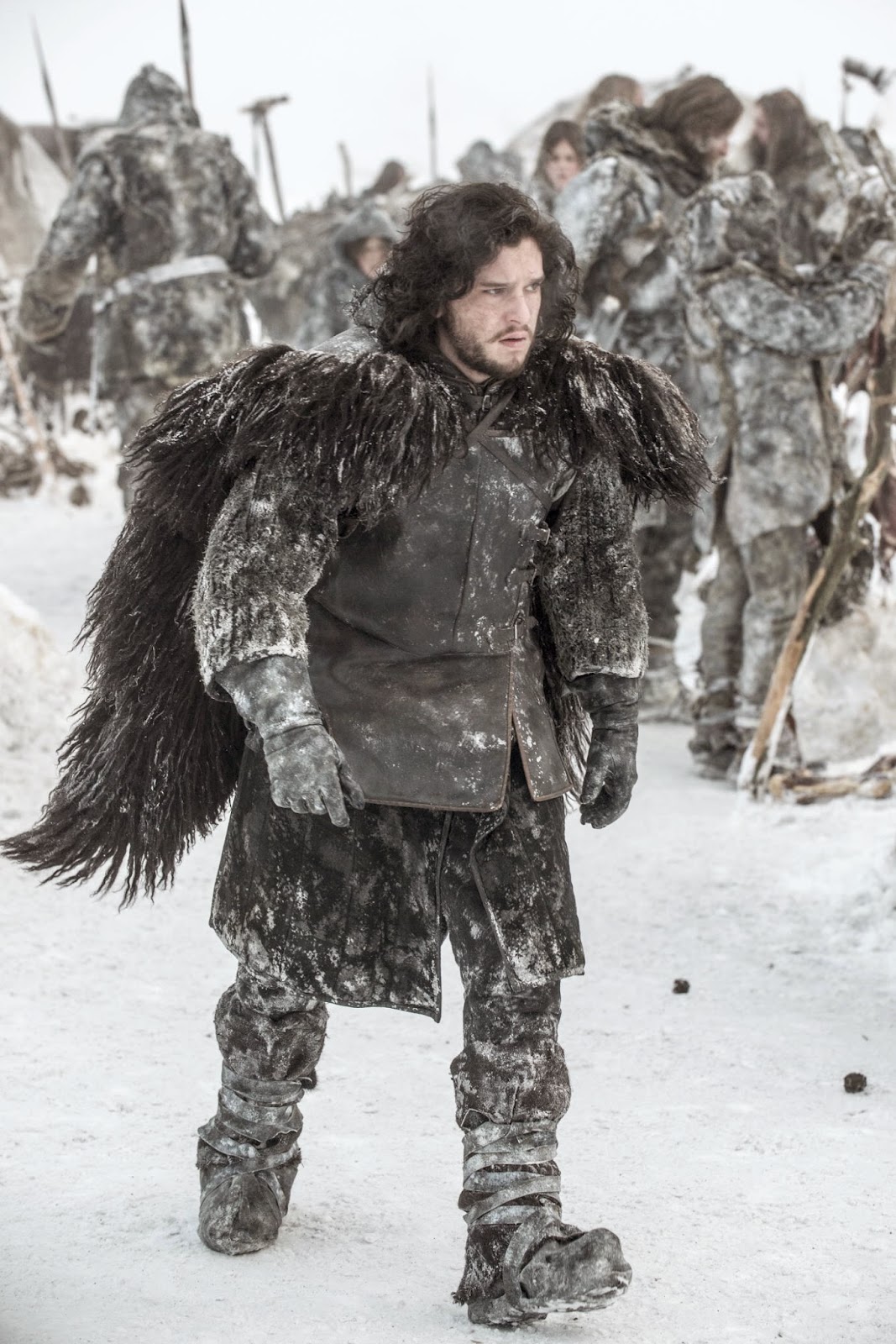 The Game of Thrones costumes include massive amounts of detail and thought, and I hope they tour again next year! (Fingers crossed for a UK visit, but I guess Northern Ireland isn't too far.) Keep a look out for my next costume post, which I'm planning will focus on Daenerys's ever changing wardrobe. And here's the trailer for series 5!