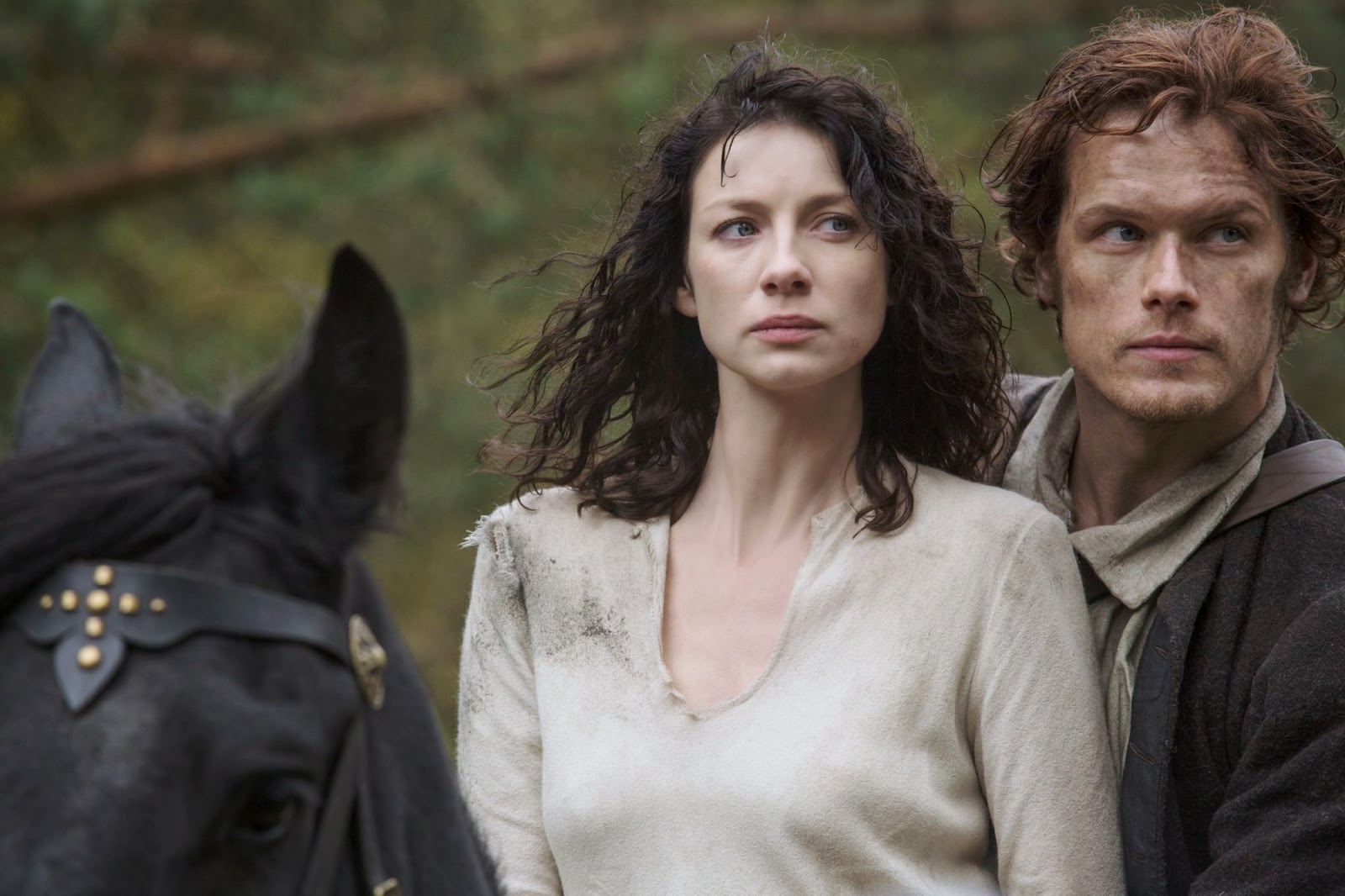 Over the past few weeks I have discovered a new guilty pleasure - and his name is Jamie Fraiser. No, I'm joking (kind of.) Men in kilts might be one reason to watch Outlander but it's got more going for it than that. Based on the first in a series of novels by Diana Gabaldon and broadcast on US network Starz (let us not go into how I came to watch it in the UK) Outlander is an historical/fantasy drama that tells the story of ex-military nurse Claire Randall, who  - while on a second honeymoon in Scotland, post World War Two - manages to fall through time. Her destination? The Scottish Highlands, eighteenth century, where she is thrown into the path of handsome clansman, Jamie and the company he keeps. It might sound like the height of trashy, bodice-ripping, pseudo-history but in actual fact there is a lot to like in this ambitious, time-slip drama.

As I haven't read the books myself I thought that the mid-season break (if you can call six months a mid-season break) would be a good opportunity to get going on them. This is my 'before' post - maybe my opinions will change after I've read at least some of the books. 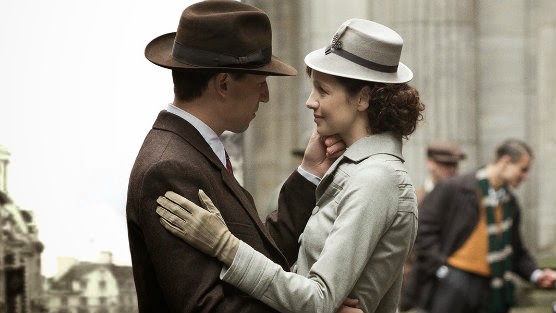 After kicking off with some obligatory scenes of nurse Claire showing tough love to some soldiers during the war, Outlander begins with our protagonist and her husband, Frank, on a 're-connecting' trip in the highlands. They have been separated for five years and are now learning how to be close again - as the annoying voice over told us repeatedly. Since everything I'd heard about Outlander  implied it was all about the Claire/Jamie love story, I was surprised how much I liked Frank - a character I'd expected to be only the dull, dump-ee in waiting. Even eight episodes in, I'm still not sure who I prefer, although much of this must be down to the wonderful acting from Tobias Menzies (AKA Game of Thrones' Edmure Tully.) Menzies shows his versatility by playing the wildly different roles of decent, intellectual Frank and also his evil ancestor, 'Black Jack' Randall. Yes, in Back to the Future fashion, this series boasts a character in the past who is the doppleganger of his multiple-greats grandson - a sadistic English officer whom Frank has been researching and who just happens to run into Claire when she drops into the eighteenth century. 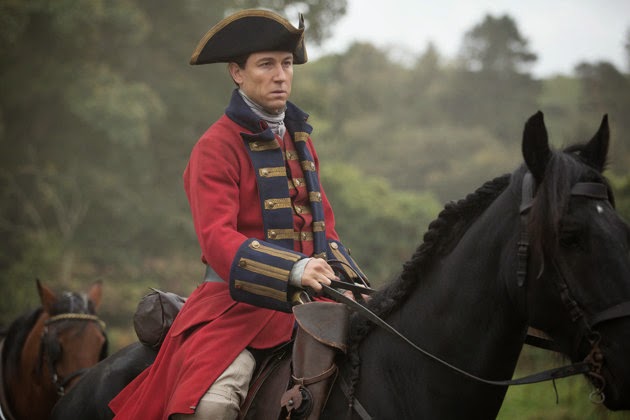 One of the positives of Outlander has to be the cast. Lots of familiar faces as well as some new ones, the acting is good and  - as far as I've heard  - the fans of the novel don't seem to have too many complaints. I don't know how you could be honestly disappointed in Sam Heughan's Jamie (what a beautiful man) and Claire as played by Caitriona Balfe is strong, intelligent and surprisingly un-annoying - although seriously they need to cut back on that narration. Scotland is the additional character of course, and the gorgeous Highland landscapes don't disappoint. 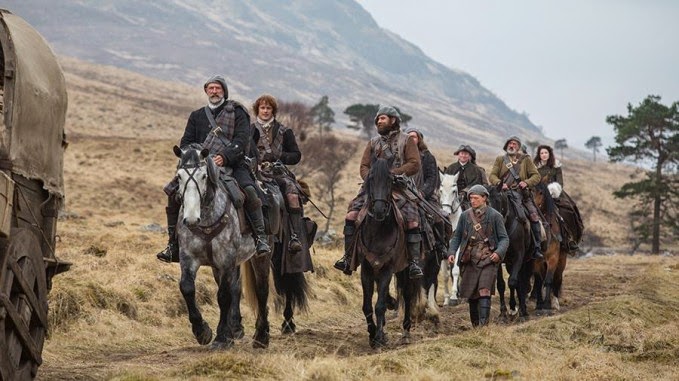 If character is Outlander's main strength, it's weakness has got to be the pace. My guess is it's perhaps following the book a little too closely? Episode one is great but after that it kind of plodded along until episode six or seven. It needs a bit more action and a bit less of rambling the castle/countryside if you ask me. Speaking of action, I would say that although Outlander's adult scenes are more naturalistic and less gratuitous than Game of Thrones (I'm including both sex and violence in this) there's quite a lot of them. As in, I wouldn't watch with your parents - especially not the wedding episode.

As far as I can see, Outlander is aimed at a mainly female audience, but not in a patronising way. It's a bit trashy, yes, but it doesn't assume that the audience is stupid. It's a proper drama with attention to historical detail, a strong female protagonist, well-rounded and non-typical  love interests (both Jamie and Frank are much different from the two-dimensional romantic figures I expected) and it includes its share of sex and violence without being sleazy. Now that the pace has picked up, it's devastating to realise that we have to wait until April for the resolution of last week's cliffhanger. Just, why? 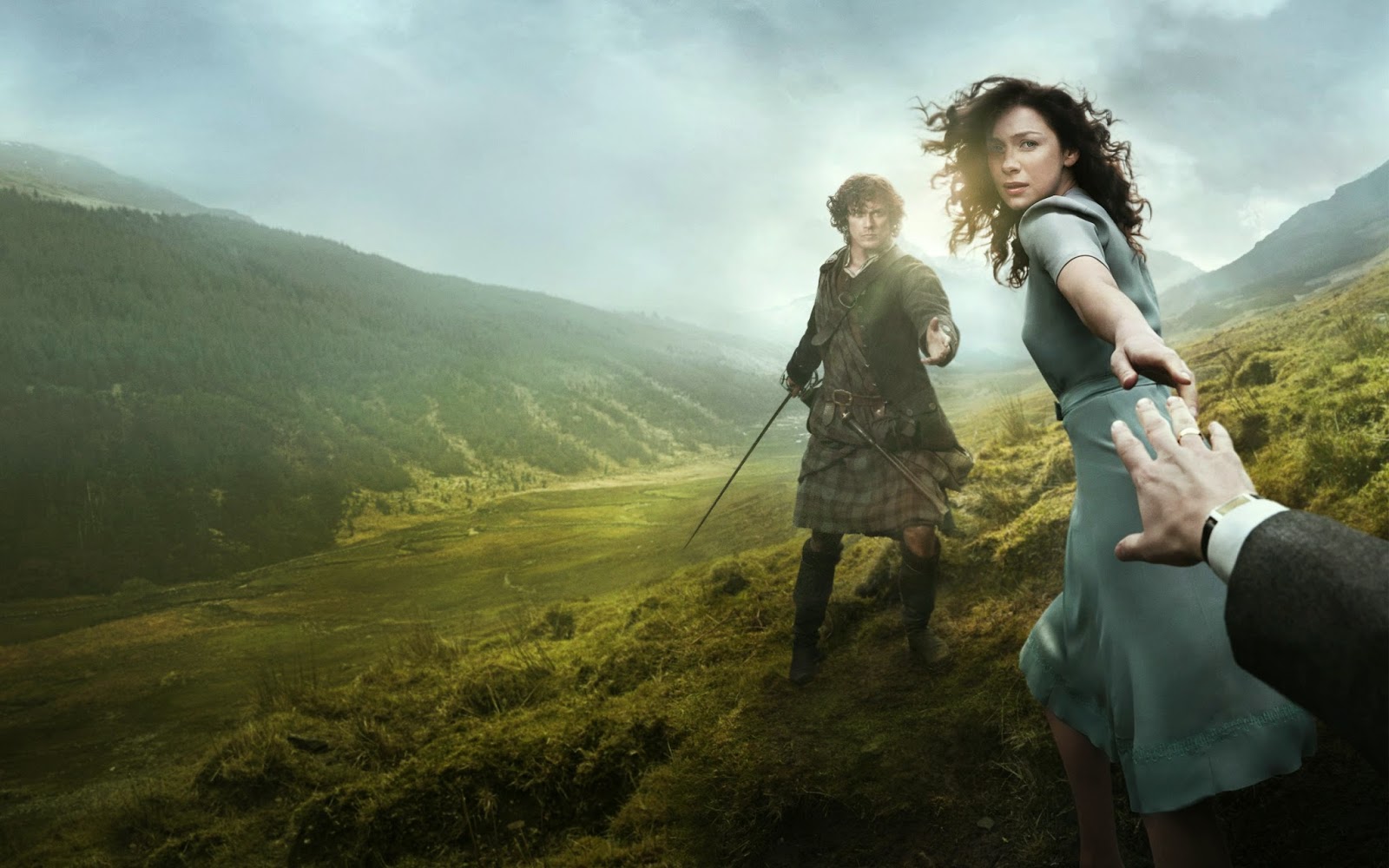 At the end of the day, Outlander is not particularly cultural or deep, but it's definitely something I would recommend. Although it may take a while to get into its stride, this is a lavish adaptation with a great cast and a fun premise - I'm intrigued to see how the story will develop and have already been  looking up Bonnie Prince Charlie and the Jacobite rebellions (which form the historical background to much of the Outlander story). And I hope it comes to England soon, it'd be nice not to have to break laws for the sake of a TV show.