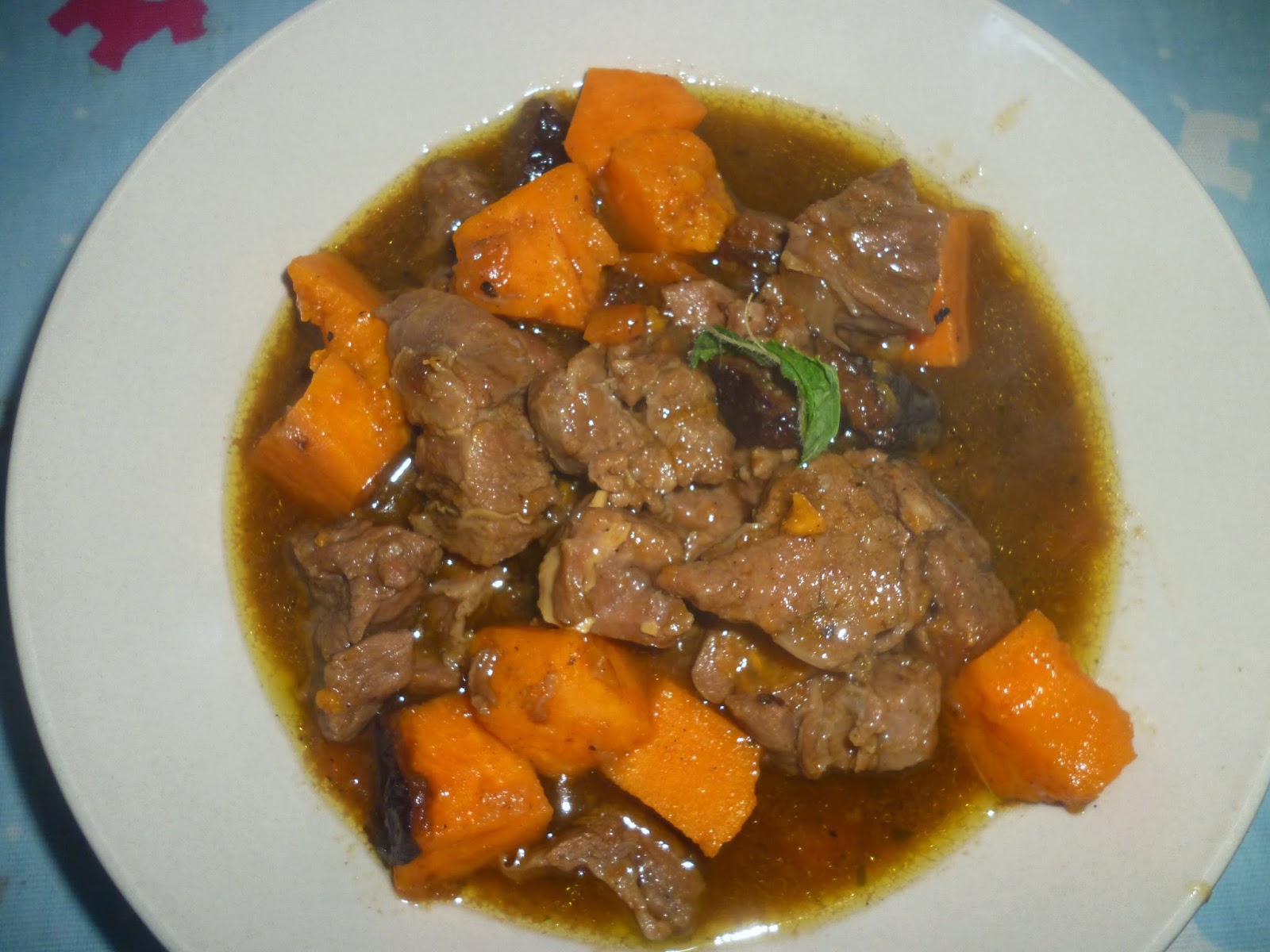 So this week I thought I'd try another fictional recipe, and since it was my turn to cook the tea I decided on something a bit more substantial. The Hunger Games trilogy might seem like an odd place to look for recipes, but the descriptions of food in the Capitol aren't exactly lacking and Suzanne Collins always comes back to Katniss's favourite dish - a rich lamb stew with dried plums. I was a little wary of whether I could pull this off (especially as the lamb cost a bomb - why is it so expensive??) but I took the risk and surprisingly it paid off. It was really tasty, but very rich. And next time I'll use less oil...

(The Hunger Games film doesn't make much mention of the stew - but could that be it, in this picture?)

Although The Hunger Games author is not big on in depth description of food, she nevertheless always manages to convey to the reader a sense of something delicious. The luxury of the Capitol compared with the poverty of the districts is emphasised through the mention of food - in the seam, Katniss's home, they tend to eat bread and grain, when they can get food at all. In the Capitol they feast on thick soups, lamb chops and an array of other delicacies. During Katniss's interview with Hunger Games host, Caesar Flickerman, she cites the Lamb stew as her favourite thing about the Capitol:

' “What’s impressed you most
since you arrived here?” I rack my brain for something
that made me happy here. Be honest, I think. Be honest.

Caesar laughs, and vaguely I realize some of the
audience has joined in.

- from The Hunger Games, Suzanne Collins

The only thing we know for definite about the stew is that it contains lamb, dried plums, has a thick gravy and is served with 'wild rice'. The below recipe takes inspiration from the use of these prime ingredients - dried fruit and lamb are often used in Moroccan cooking, so it's fair to assume that the flavourings might be equally as exotic. What rice you use, if any, is your preference. 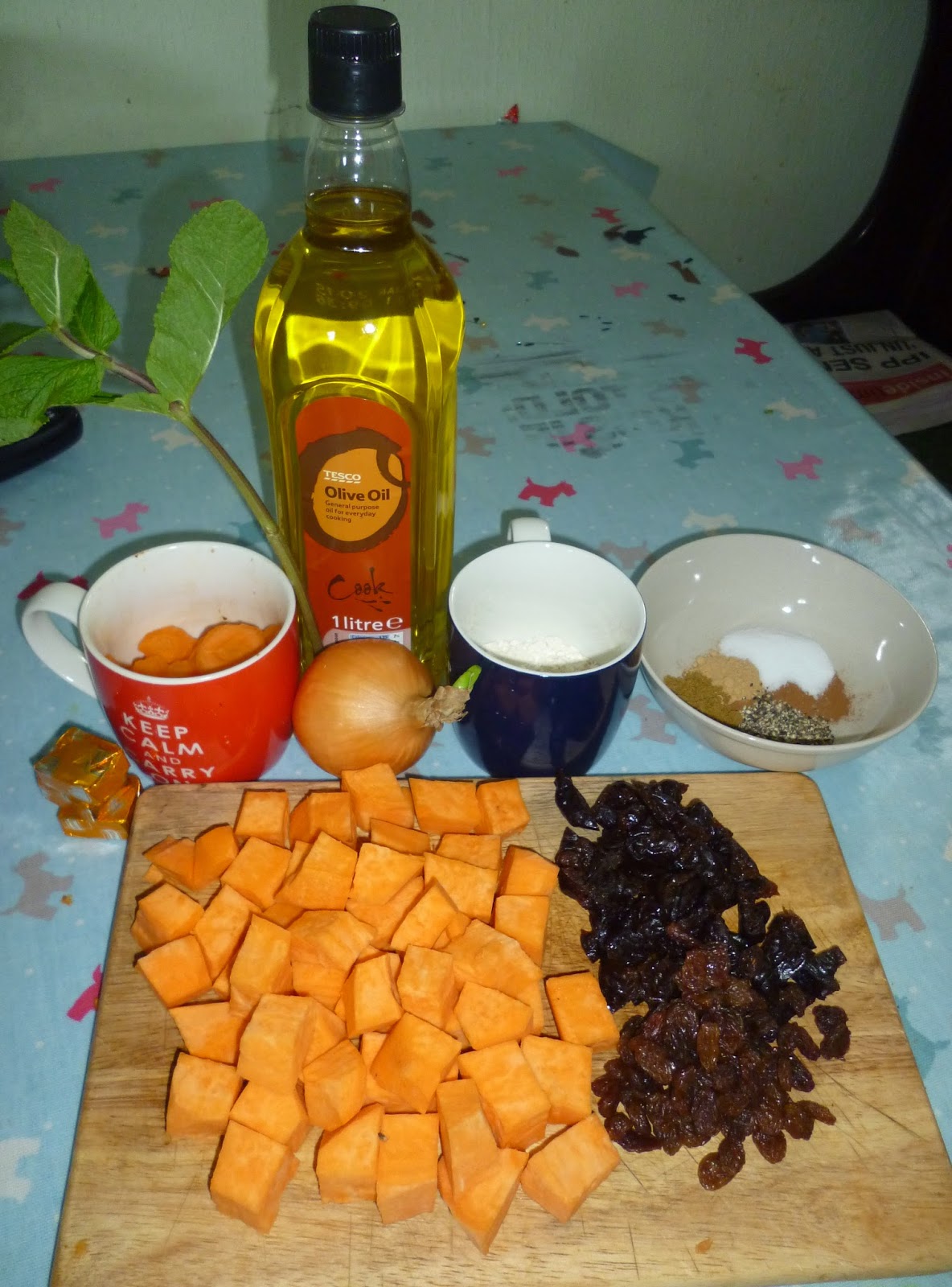 2. Toss the lamb in a quarter of a cup of flour (only half shown of the lamb chunks shown here.) 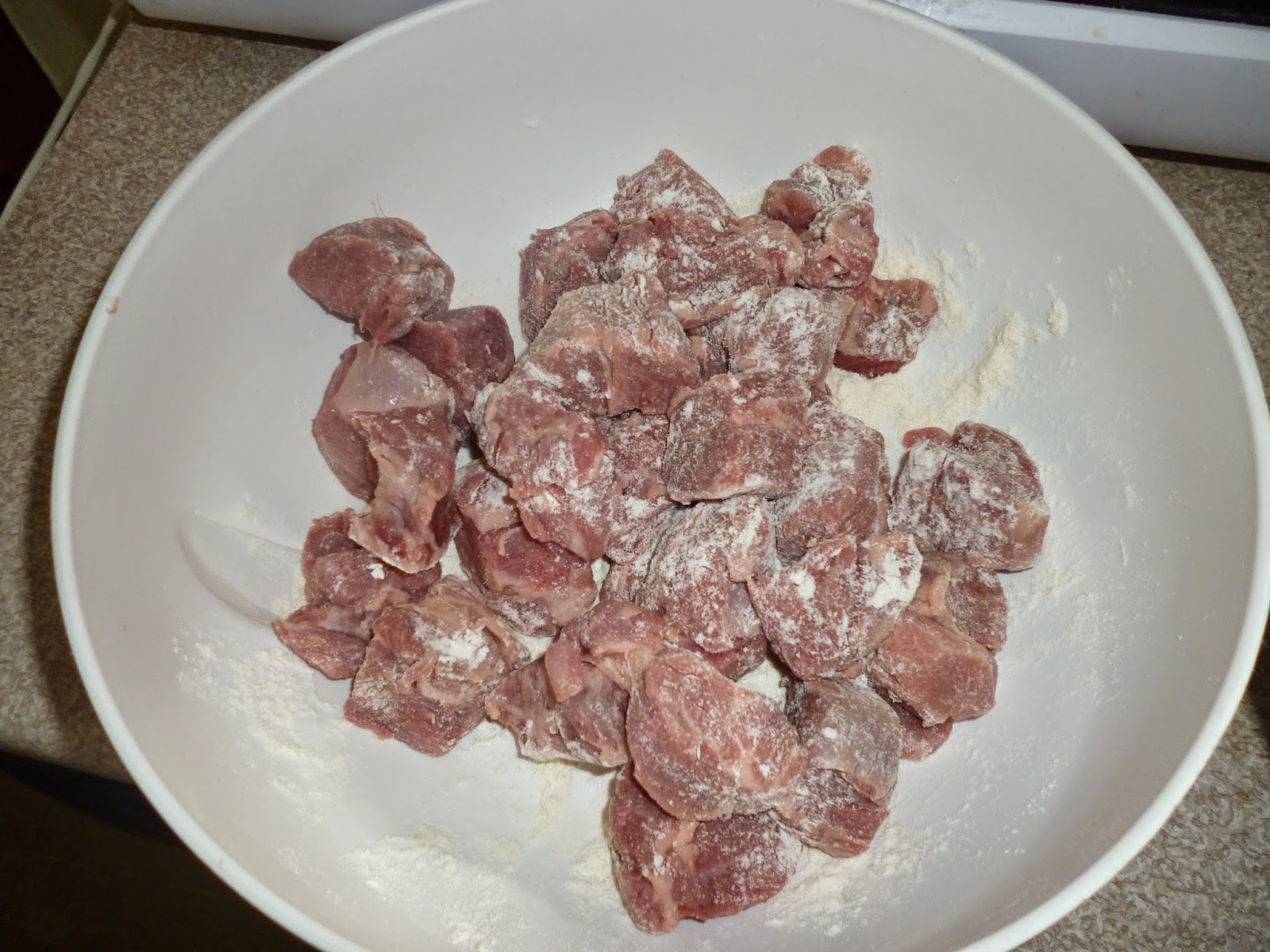 4.  Add the lamb in single layers and cook until browned. Remove lamb from pan. 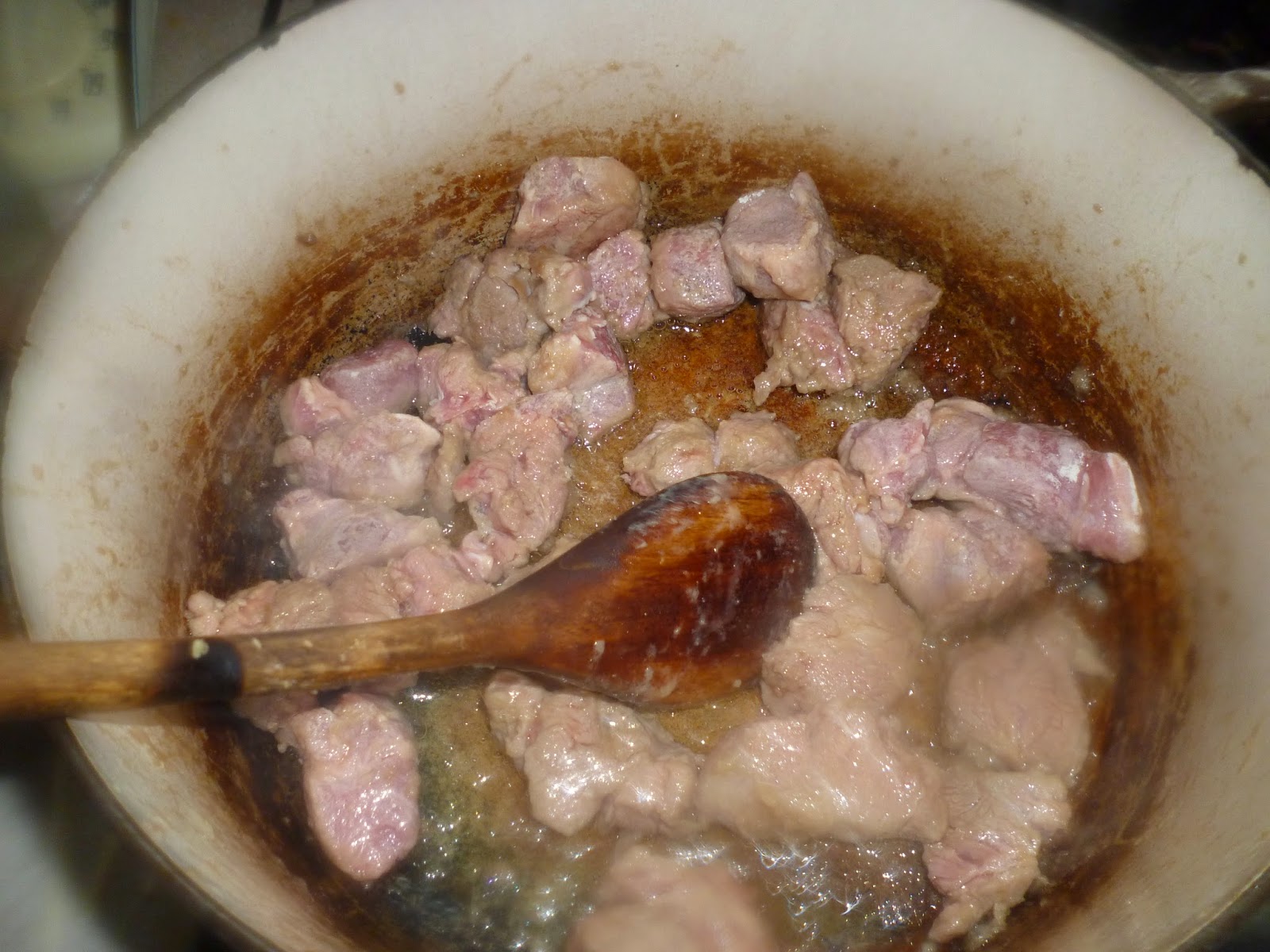 5. Add half a cup of chopped carrots and one small finely chopped onion. Cook until softened. 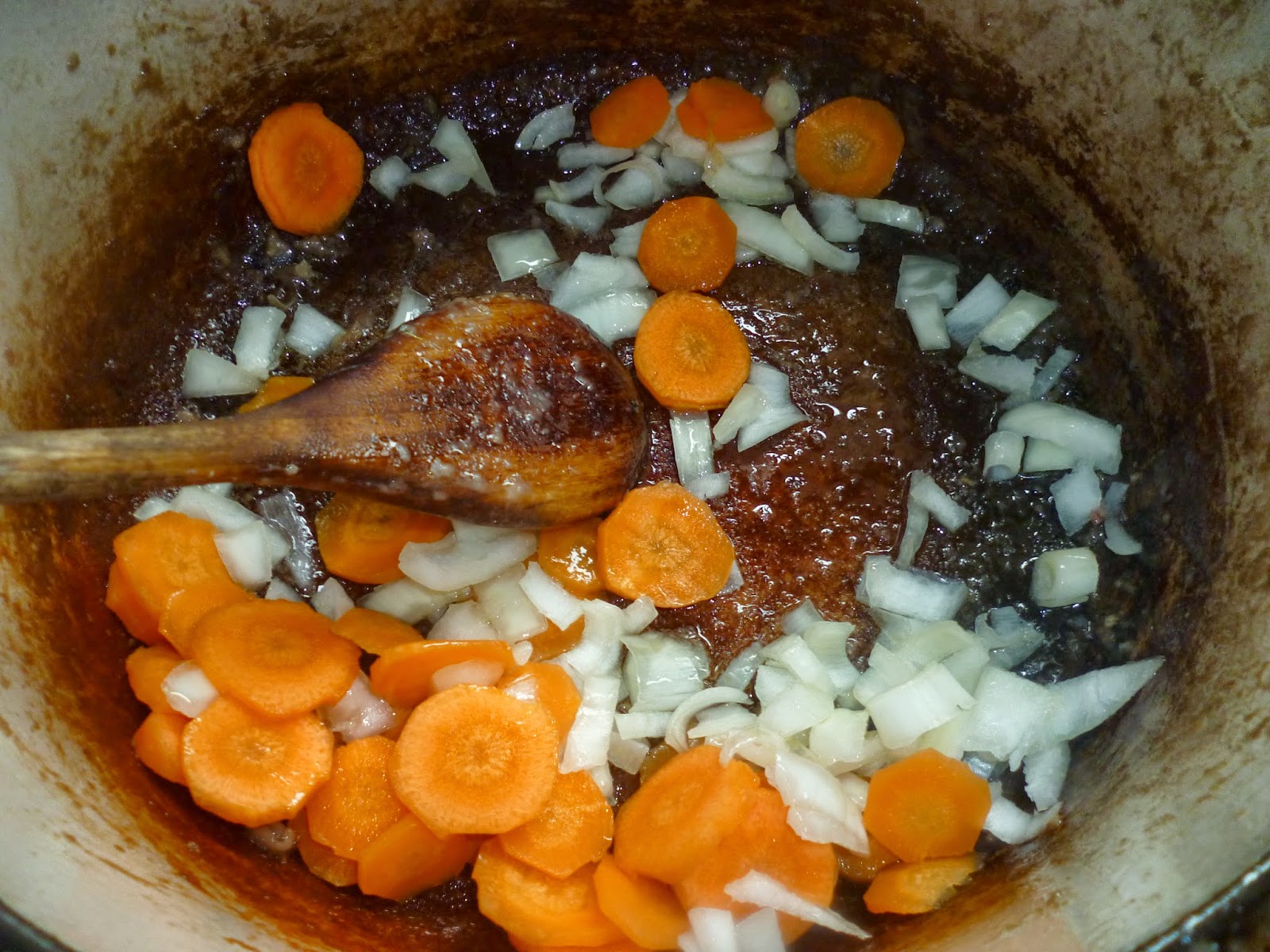 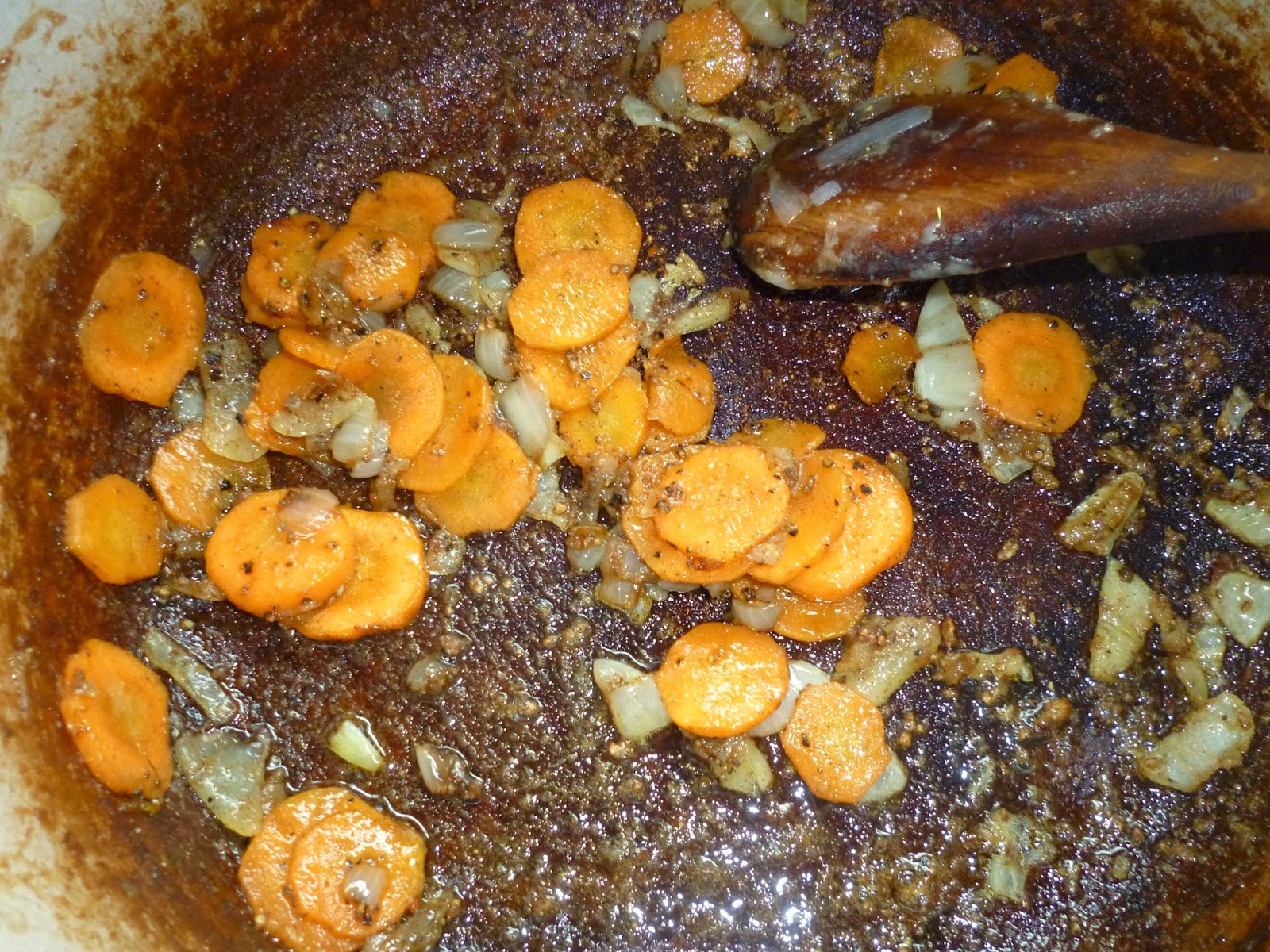 7. Return lamb to pan and mix together.

8. Add three chicken stock cubes (or two stock pots) to 700 ml of boiling water. Pour over lamb and mix in. 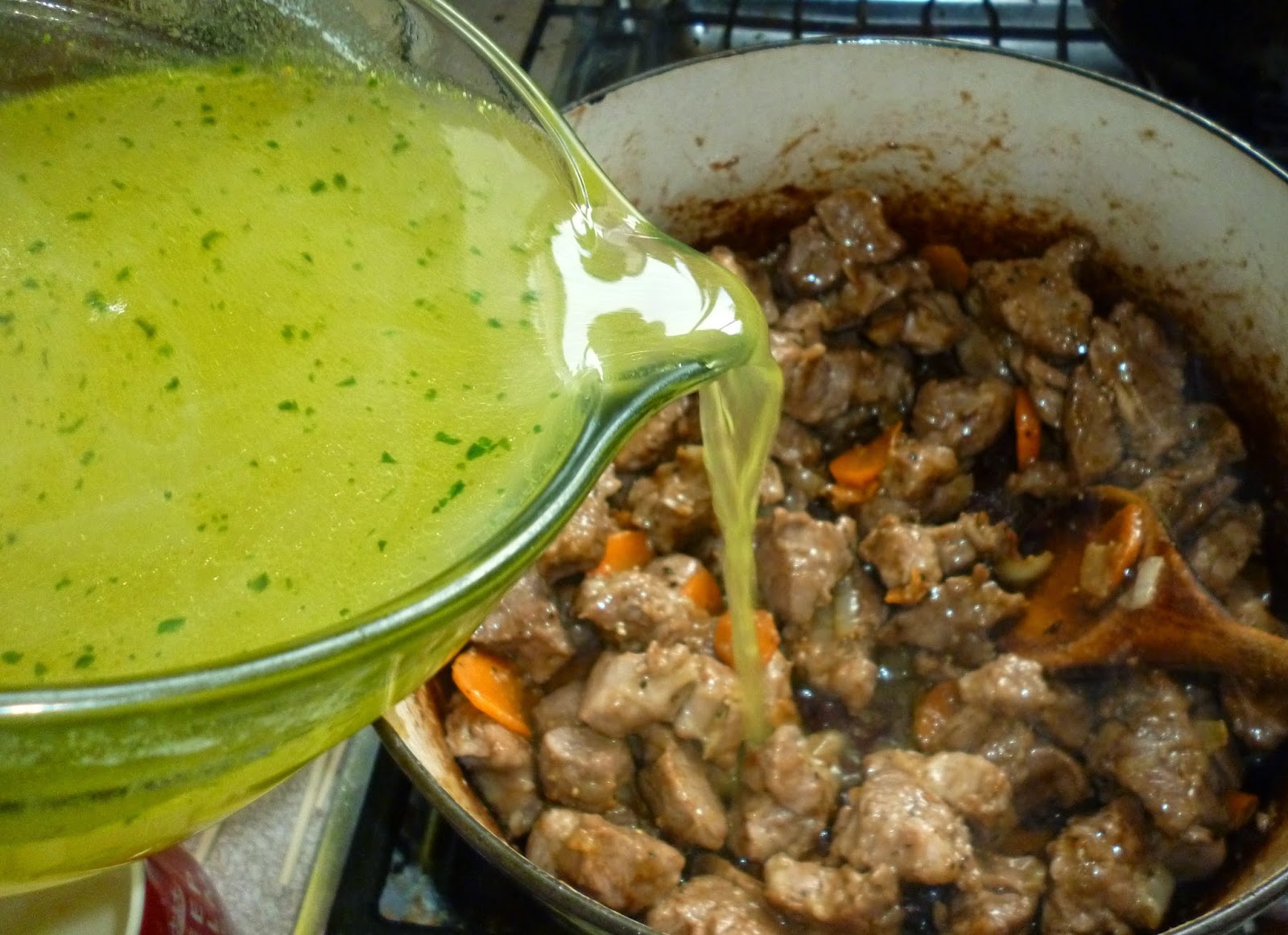 9. Bring to simmer, then cover and place in the oven (middle rack) for 1.5 hours. 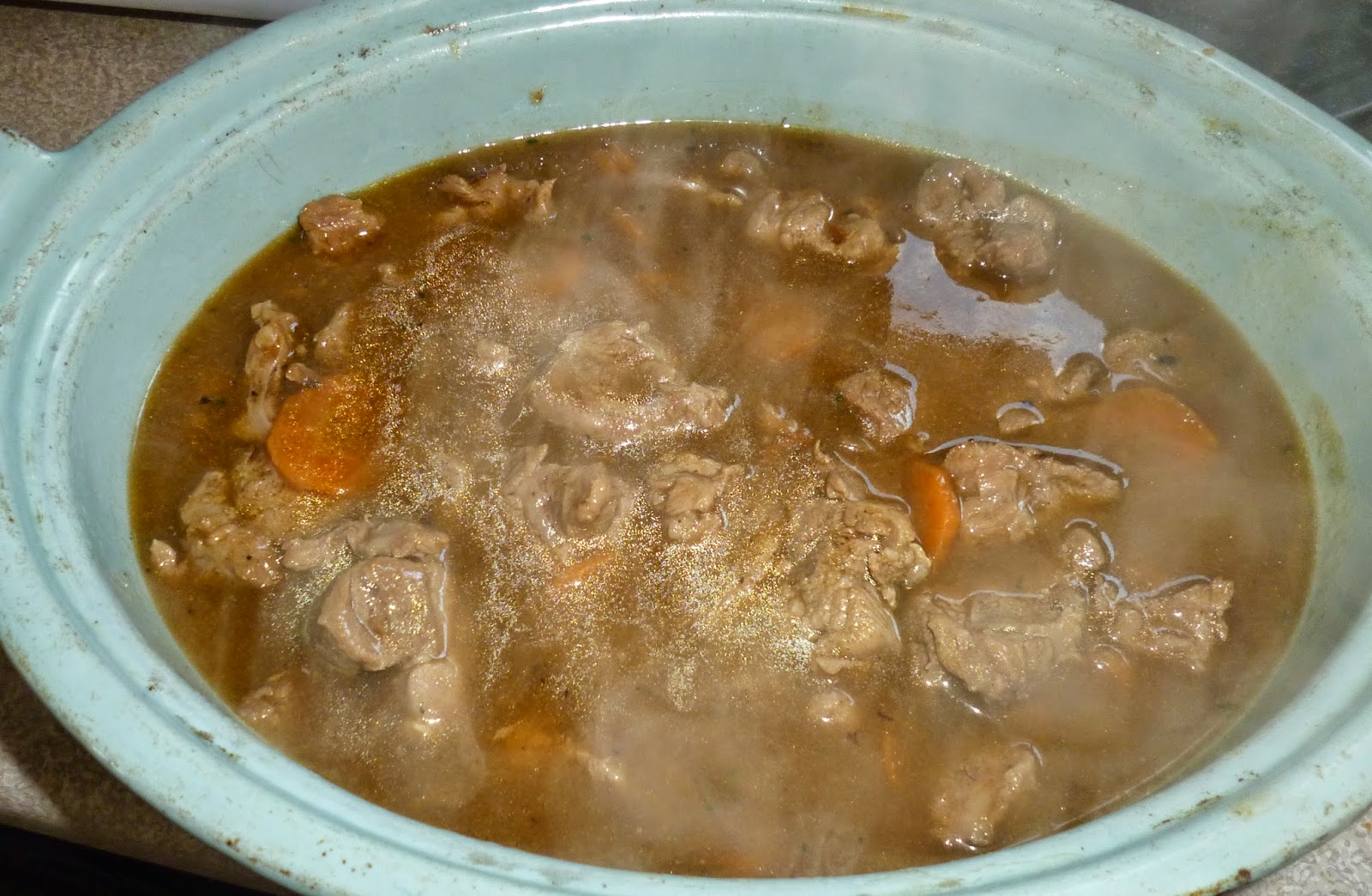 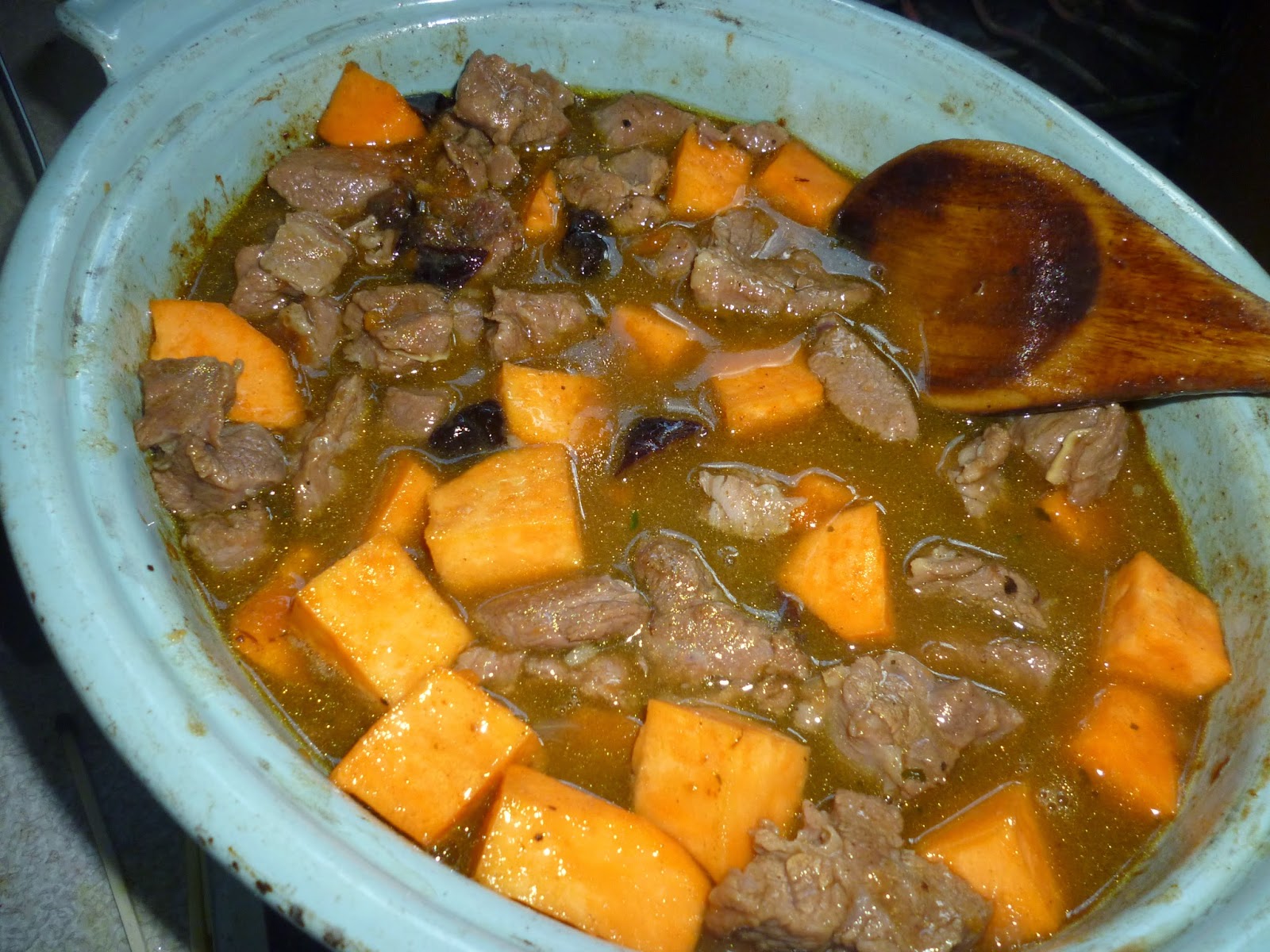 11. Place back into oven and cook for a further 20-25 minutes, until potatoes are tender (but not mushy).

12. Stir in some sprigs of fresh mint and serve - in the Capitol Katniss ate this dish over 'hot grains' - but in           my book stew with rice is just un-natural, so I paired it with crusty bread instead. 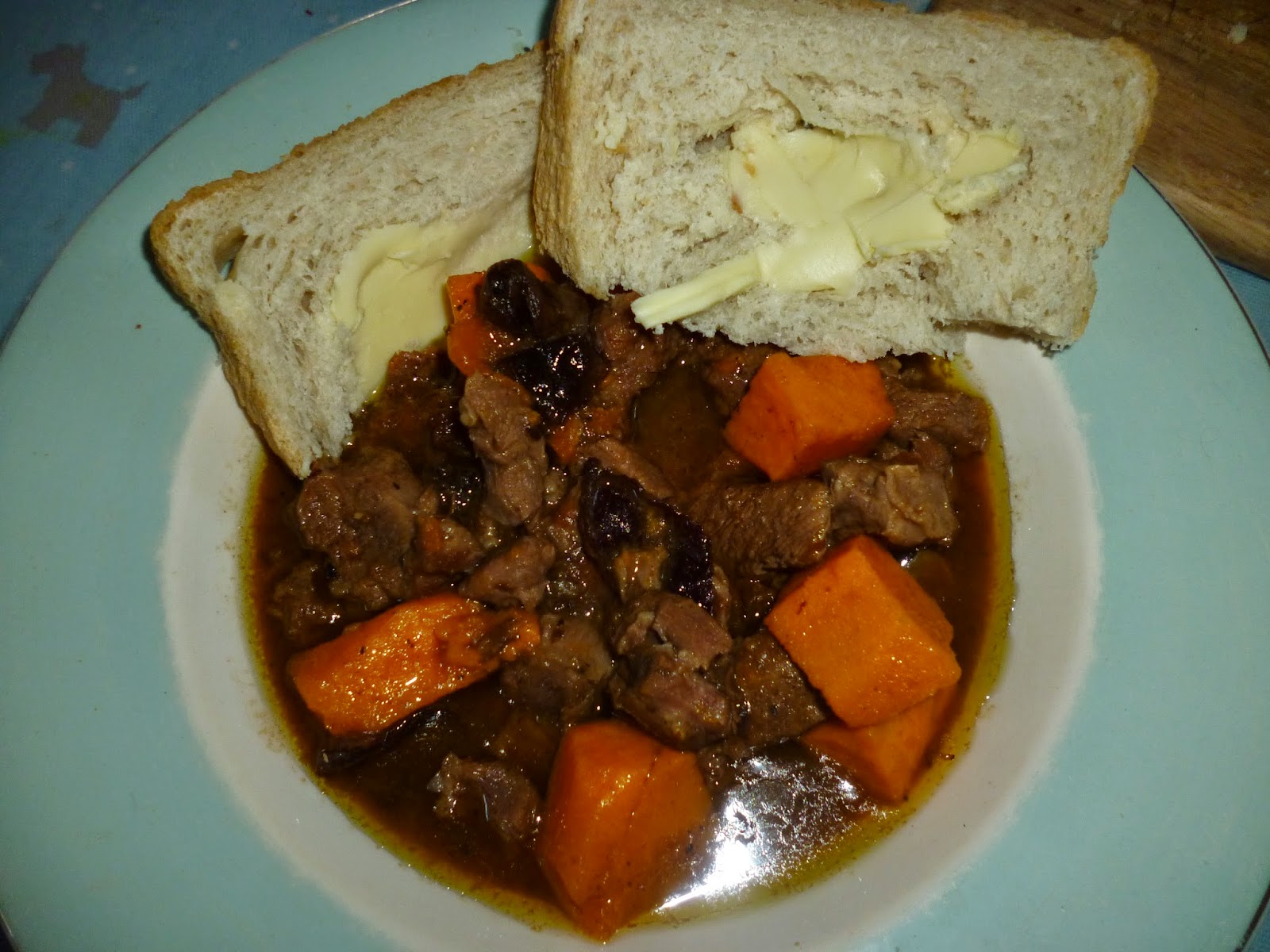 My verdict? Definitely worth a try. The sweet potatoes (which i'd never tasted before) were delicious, as was the combination of Moroccan inspired flavourings. Even the prunes - which I was pretty wary of in the beginning - complimented it all really nicely. I would say, however, to stick to small helpings. I don't think I could have eaten it by the bucketful, as it is extremely rich.

And unfortunately, I can't take any credit for this great recipe, which came from TheGourmandMom's blog. The only edits I made were to halve the amount of salt (which was a bit overpowering) and take away the dried apricots - I kind of thought there was enough fruit without them, but of course this is only personal preference.