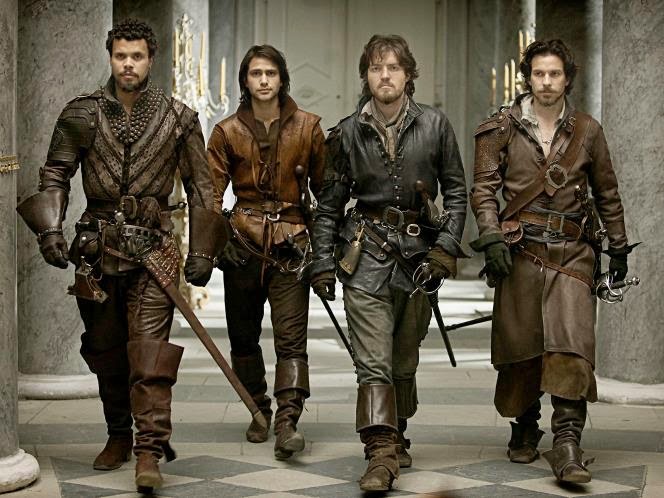 Before Game of Thrones and Nashville returned to our screens for their respective new seasons, the TV of 2014 was experiencing a bit of a drought. Thank God then, for The Musketeers - the BBC's newest offering of the Merlin/Robin Hood variety (albeit aimed at an older audience) that livened up our Sunday nights. Loosely based on Alexandre Dumas's classic - or rather, its characters -  The Musketeers was full of swashbuckling, drama and beautiful men, but the costumes nevertheless fought for our attention. Putting a contemporary spin on seventeenth century French fashions, costume designer Phoebe de Gaye and her team  took inspiration from Dumas's novel and its countless adaptations, yet created a look for the show that was new and original. 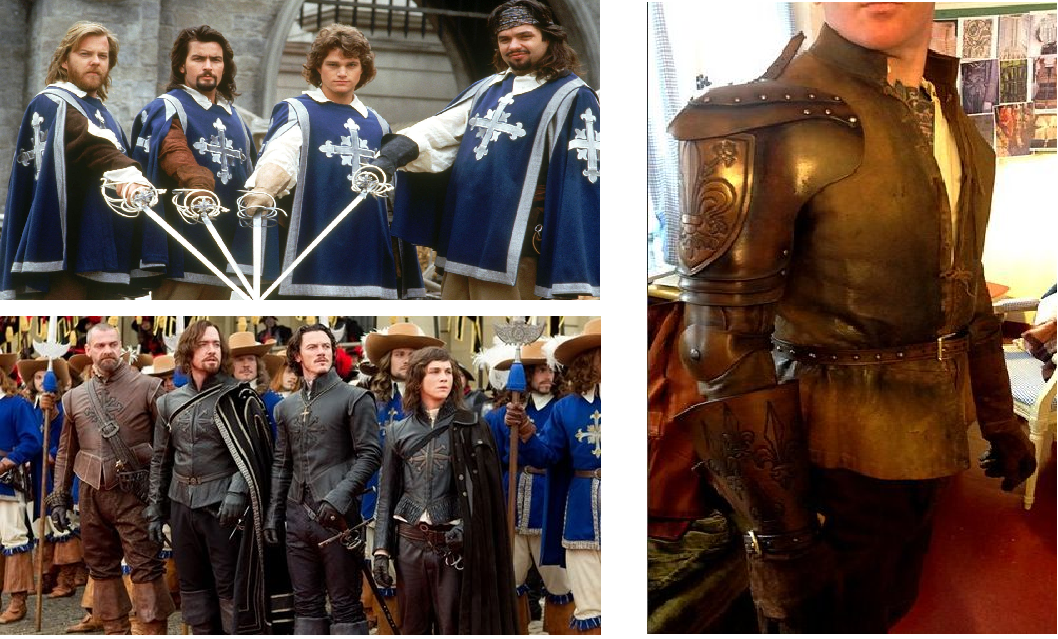 One of the biggest departures from tradition was the musketeers' uniforms, as the trademark blue tabards have been dispensed with in this adaptation. The BBC is not the first to take this route (the 2011 film adaptation did it already) and even in the novel it is stated that the tabards were "not absolutely obligatory, in that age of lesser freedom but greater independence". Yet how to make the Musketeers look like a band of soldiers without uniforms? The answer seems to be a blue cloak and an arm guard with the Fleur de lis - two items that identify our heroes as part of their organisation, while allowing the costume designers the freedom to give each character an individual look. And the cloaks look great. 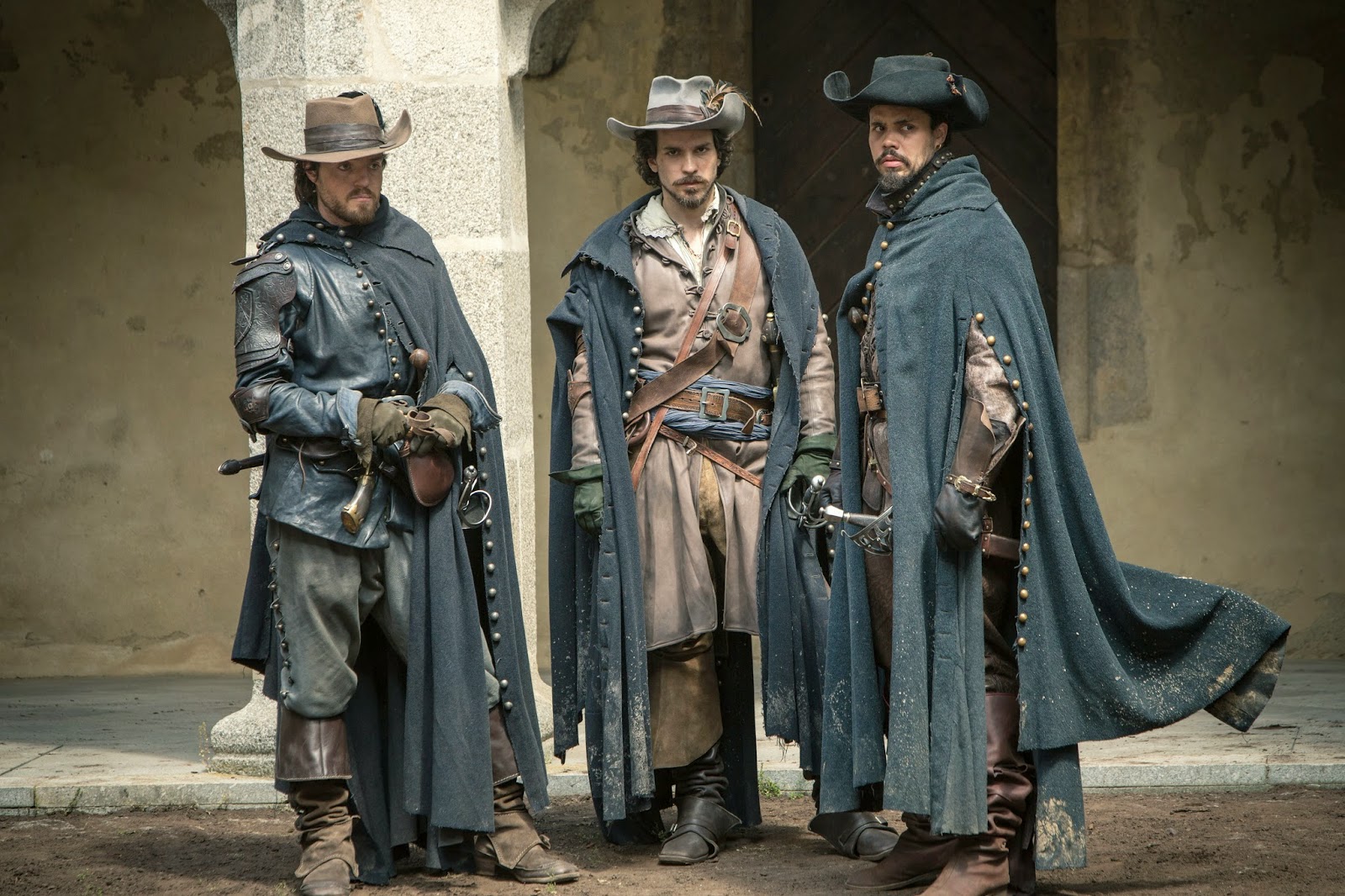 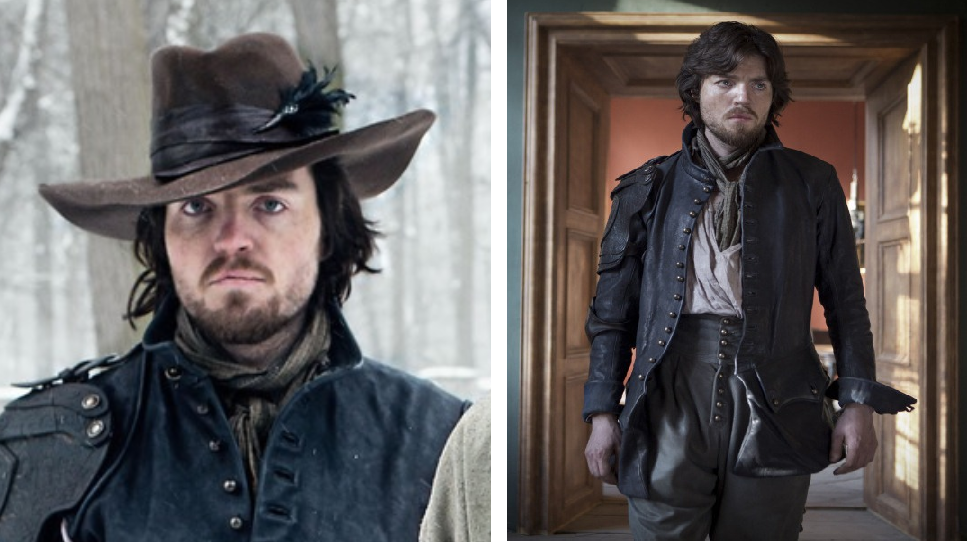 Despite appearing to dress similarly, the individual costumes of the musketeers (and D'artagnan) have been created to reflect their individual personalities.

Athos (above) - the brooding, upright leader of the group - wears a lot of black, possibly to symbolise his serious nature and dark past. As an aristocrat his clothing is a little bit smarter, with subtle elaborate details.  In the novel, Athos is always in uniform, "buttoned up tight" but the Athos of the series is less together. He drinks, he's more affected by his past than he lets on. The difference in his costume reflects this. 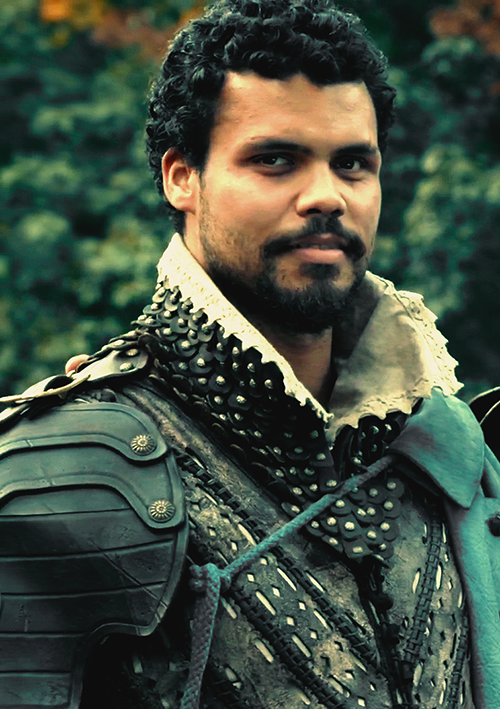 Porthos (left) often thought of as the brawn of the group, is in fact the most elaborate dresser in the novel. When we first meet him he is wearing "an outlandish get-up" consisting of "sky-blue jerkin", "a long, crimson velvet cloak" and "a magnificent, gold embroidered baldric" (sash). Porthos is also of humbler origins than the rest - which perhaps explains his need to dress up to impress. His clothes in the series nod both to his strength and outlandishness (although on screen his personality is more down to earth) as his clothes are both more detailed and robust looking than his comrades'.

When it comes to Aramis, (below) the designers were clearly building more on his romantic reputation than his spiritual one (Aramis of the novel has a way with women but also aspirations of becoming a priest). Santiago Cabrera spends a lot of time looking suave in slouchy buckaneer-ish  get-ups and nice hats. 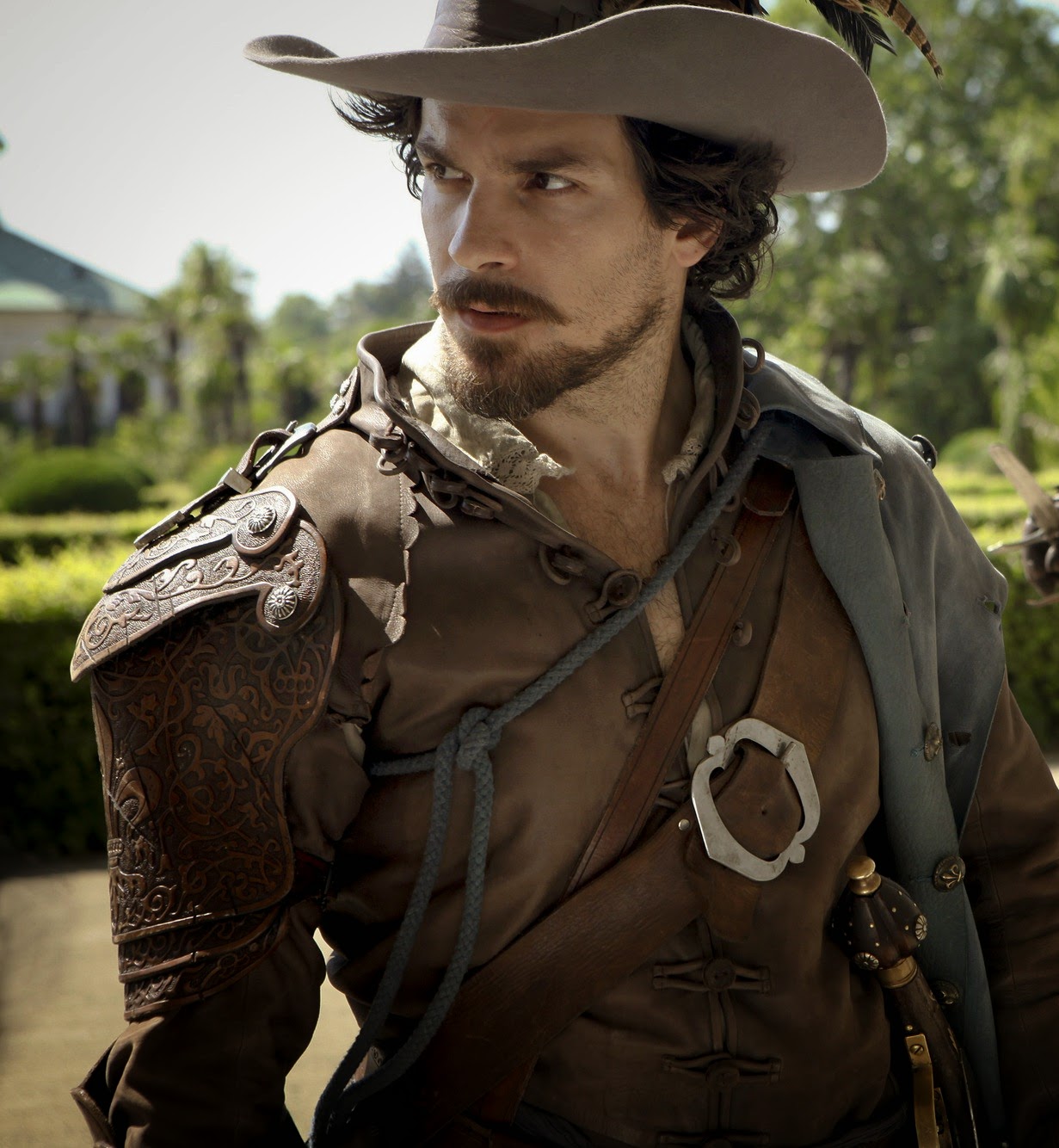 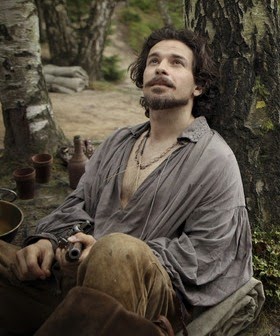 Then of course we have D'artagnan - the Gascon farmboy eager to join the ranks. When we first meet in the novel he is wearing a beret, a leather baldric and "a woolen doublet that had once been blue but was now an indefinable shade of wine and dregs and azure". The costume designers have binned the beret but D'artagnan's outfits still have a rustic, unpolished feel to them. 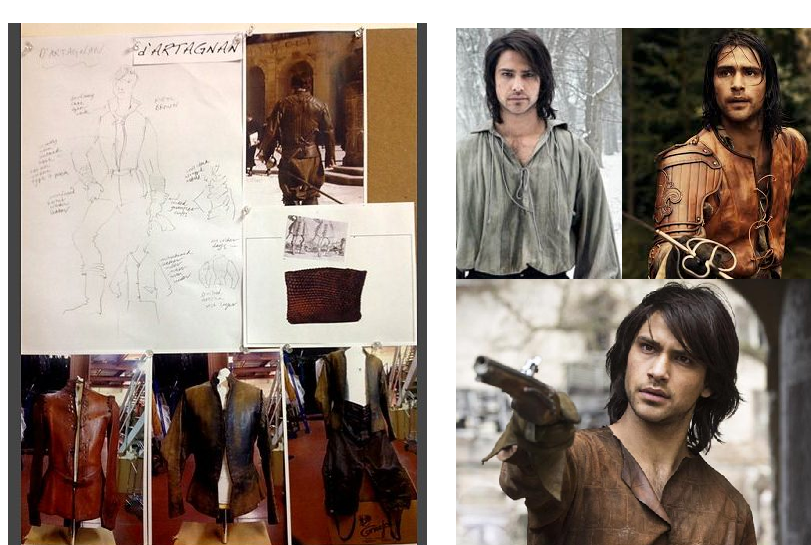 When it comes to the show's women, things get more exciting. The Musketeers website tells us that the women's costumes had to be "feminine, but not fanciful". The clothes were designed as "a blend of high, in-your-face fashion and wearable clothes that would enable the actresses to run, ride and - if necessary - fight."
See Link: http://www.bbc.co.uk/programmes/p00sxqkb/profiles/phoebe-de-gaye
I wouldn't say that the women of Musketeers were exactly feminist icons, but I liked them and I liked their costumes. 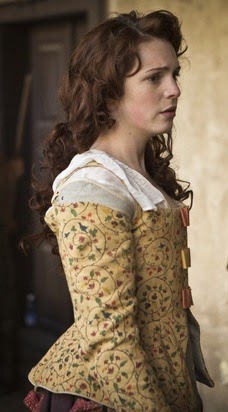 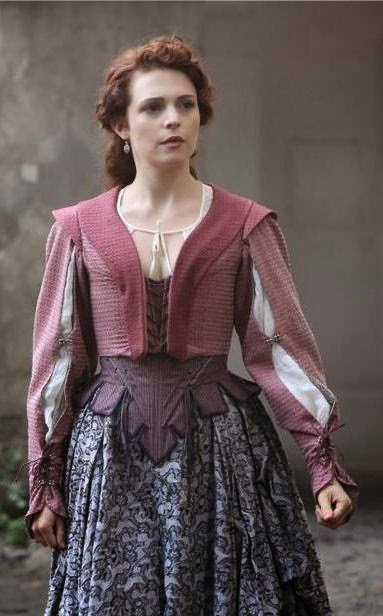 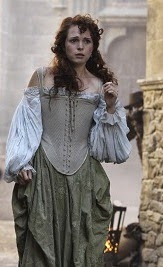 Love interest for Dartangn, Constance Bonacieux, is kind, smart... and married to his landlord. Described in the book as between twenty-five and twenty six, with brown hair and blue eyes, Constance is a different kind of heroine as she is a 'matron' not a 'girl'. She is also neither pauper nor 'lady', but a merchant's wife.

The costume designers have highlighted both the mature and girlish in Constance's wardrobe - tailored dresses and jackets when she's being Madame Bonacieux, lots of  low-cut, off the shoulder stuff in her scenes with D'artagnan. And as she's not a duchess her clothes don't have to be all that elegant - they can be a bit quirkier.

The scheming Milady stands in contrast to Constance in character and in costume. Her clothes give an impression of wealth, strength and sexuality and she wears a lot of black, dark greens and reds. Although in the novel Milady is more demure in appearance, one similarity is of course her trademark choker. It may be worn out of necessity but it also a statement, more fitting than delicate jewellery.

Aside from the women and the musketeers themselves, we have the politicians. Manipulative and complex Cardinal Richelieu, the childlike King Louis and his Queen, Anne of Austria. For the King and Queen, the costumers can really go to town, but even Richelieu provides an outlet for creativity. Although he wears his Cardinal's robes on occasion, Peter Capaldi's Cardinal is most often seen striking an imposing figure in head to toe black leather. 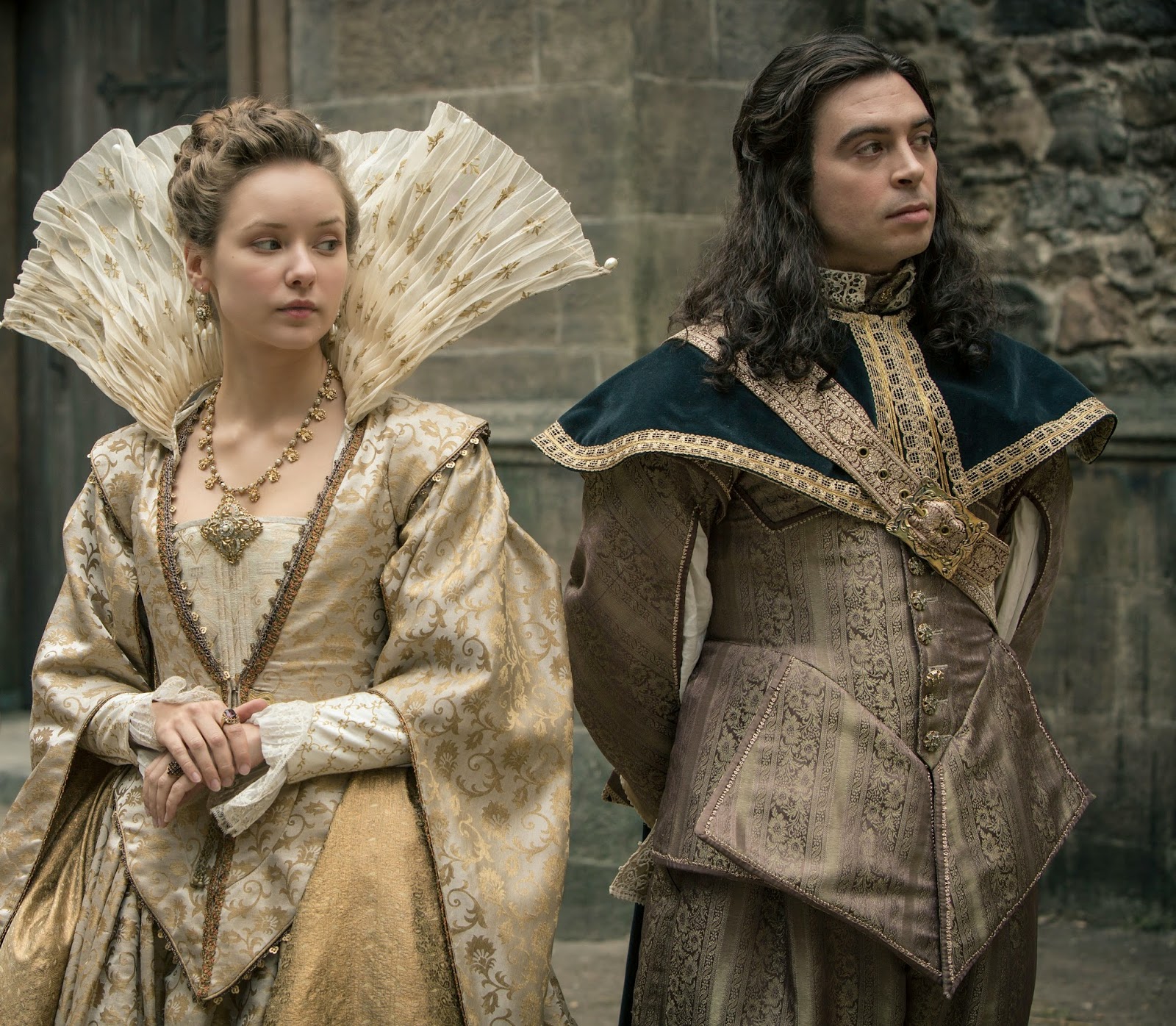 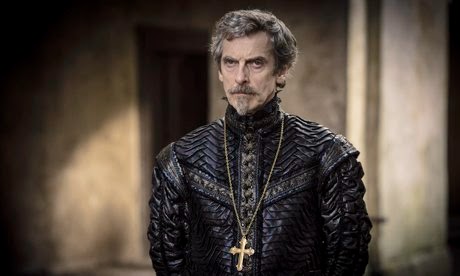 The Musketeers wasn't the best programme in the world. It wasn't particularly faithful to the source text. But the characters were engaging, the plots were enjoyable and the costumes were great. And it has prompted me to read the novel, which I'm really enjoying so far. I would recommend both book and series (which I think has been sold to other countries - pretty sure its going to BBC America anyway).

For my next 'costume stuff'' I'm thinking maybe Game of Thrones? (I've got it on the brain at the moment, stupid two week break) but any suggestions for others are welcome.