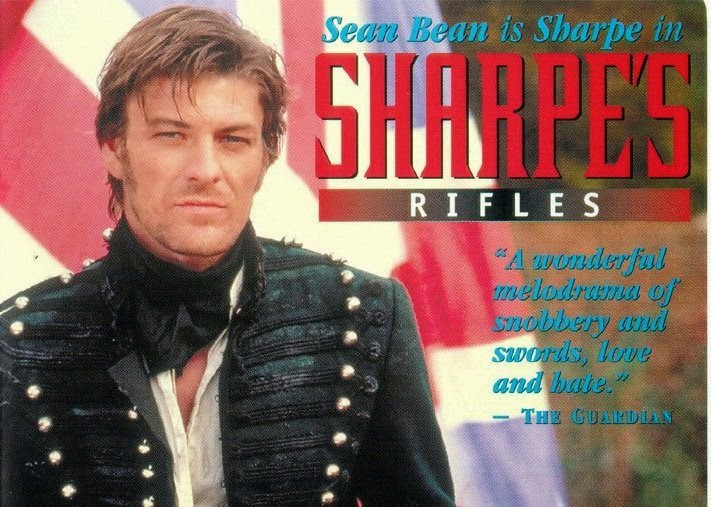 Film or TV? - TV film!
Famous or Obscure? - Quite famous
Better on page/screen? - I think... the book was better.

My last few posts have been decidedly girly, so to re-address the balance I thought I would review one of the few macho books I have ever read. The Sharpe novels, written by English author Bernard Cornwell, are a series of stories following the life of Richard Sharpe, a British soldier fighting under Lord Wellington in the Peninsula wars (in the earlier novels he also serves in India and Denmark, and somehow ends up at the battle of Trafalgar). The novels find our hero playing a crucial role in most of Lord Wellington's major battles, dealing in the meantime with snobbish officers, incompetent superiors and his own ambition to further his army career.

Sharpe himself is (for want of a better phrase) a like-able rogue - good-hearted and heroic, but very rough around the edges. He's a character you can root for, which I think must be one of the main reasons for the series' success. The stories are fast paced, if a little repetitive, with plenty of battle description and period detail. If you like reading about battle strategy (I don't particularly) there's a lot to interest you here, and if not the descriptions are clear enough to be understood, if you concentrate. 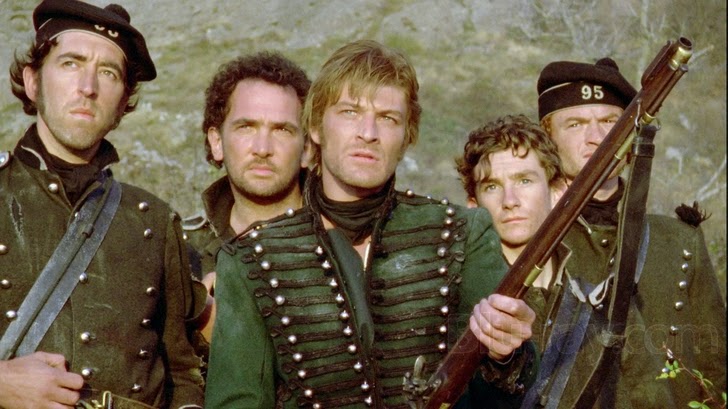 The Television series, kicking off with Sharpe's Rifles was first aired back in the nineties, as a series of films starring Sean Bean as the titular character. Bean looks great and does a good job with the part, despite being very different in appearance from the Sharpe of the novels (Cornwell's Sharpe is described as a big, black- haired Londoner.)

Sharpe's Rifles is not the first book of Bernard Cornwell's acclaimed series - either in chronological or publication order. It was, however, the first prequel, written as an origins story of sorts to provide a basis for the first episode of the film series. Sharpe's Eagle, Cornwell's first Sharpe adventure, throws us straight into the action, with Sharpe already a Lieutenant raised up from the ranks, his friendship with Irish sergeant, Patrick Harper, already solidified and the respect of his men already won. You can understand why the producers wanted a bit more of an introduction, and we get that in Sharpe's Rifle's.

That's not to say, however, that the adaptation sticks especially closely to the book. In the novels we are told that Sharpe won his officer's commission at the battle of Assaye whilst serving in India, and the story of his rise from Private to a Lieutenant of the Rifles is chartered in later written prequels (Sharpe's Tiger, Triumph, Fortress, Trafalgar and Prey). By the time we reach Rifles Sharpe is an embittered quartermaster, who when cut off from his regiment with only a small group of soldiers during an attack, must learn to be a good officer. Sharpe's Rifles is a strong prequel, but still not quite the beginning. The T.V series therefore gives us a more definite starting point, squashing in Sharpe's rescue of Wellington and subsequent reward of a commission into the beginning of the episode. In the adaptation he doesn't gain his riflemen by accident, but is given the command of their garrison after gaining his commision.

There are a few other notable plot differences, such as the early introduction of love interest Teresa, played by Assumpta Serna, but otherwise the themes of the tale are unchanged - it is the story of Sharpe beginning to gain his men's respect. To the forefront of this plot of course, is the changing relationship between Sharpe and Harper. Prequels exploring the early days of fictional friendships are not uncommon, and they usually begin with a rivalry (Monsters University anyone?) but it's still fun to see Sharpe and Harper at each other's throats. Sean Bean and Daragh O 'Malley have great on-screen chemistry, and the fight scene in particular made me laugh - who doesn't like a good brawl? 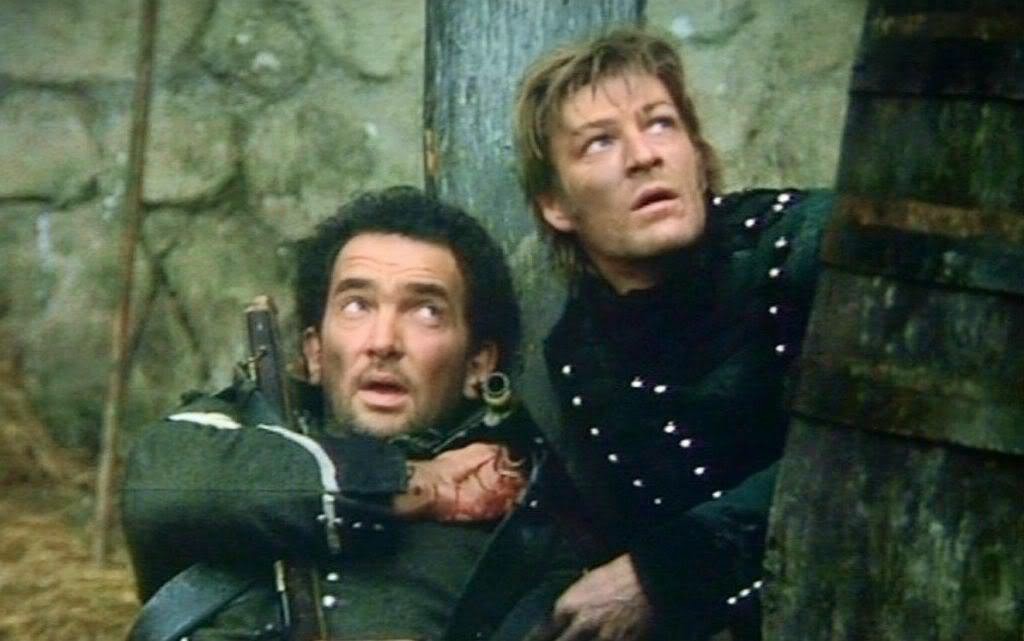 Although not applicable to the TV adaptation, my only problem with Sharpe's Rifles was that although it worked as a first prequel, as a mid-series offering it completely screwed up Sharpe's character development. At the time of writing Rifles Cornwell obviously wanted to show a different Sharpe from the one we know and love - cruder, less mature, not great with women (Sharpe doesn't get any action in this one) and that would be fine... if he hadn't gone back and written five earlier novels. Since Tiger Sharpe has been with some very lady-like ladies, and had at least one meaningful relationship. In Prey he's even planning to settle down with a strict methodist. So when Rifles opens to Sharpe oggling some fifteen year old prostitute, and behaving generally more loutish than ever, you can't help but feel that he's regressed. But oh well. 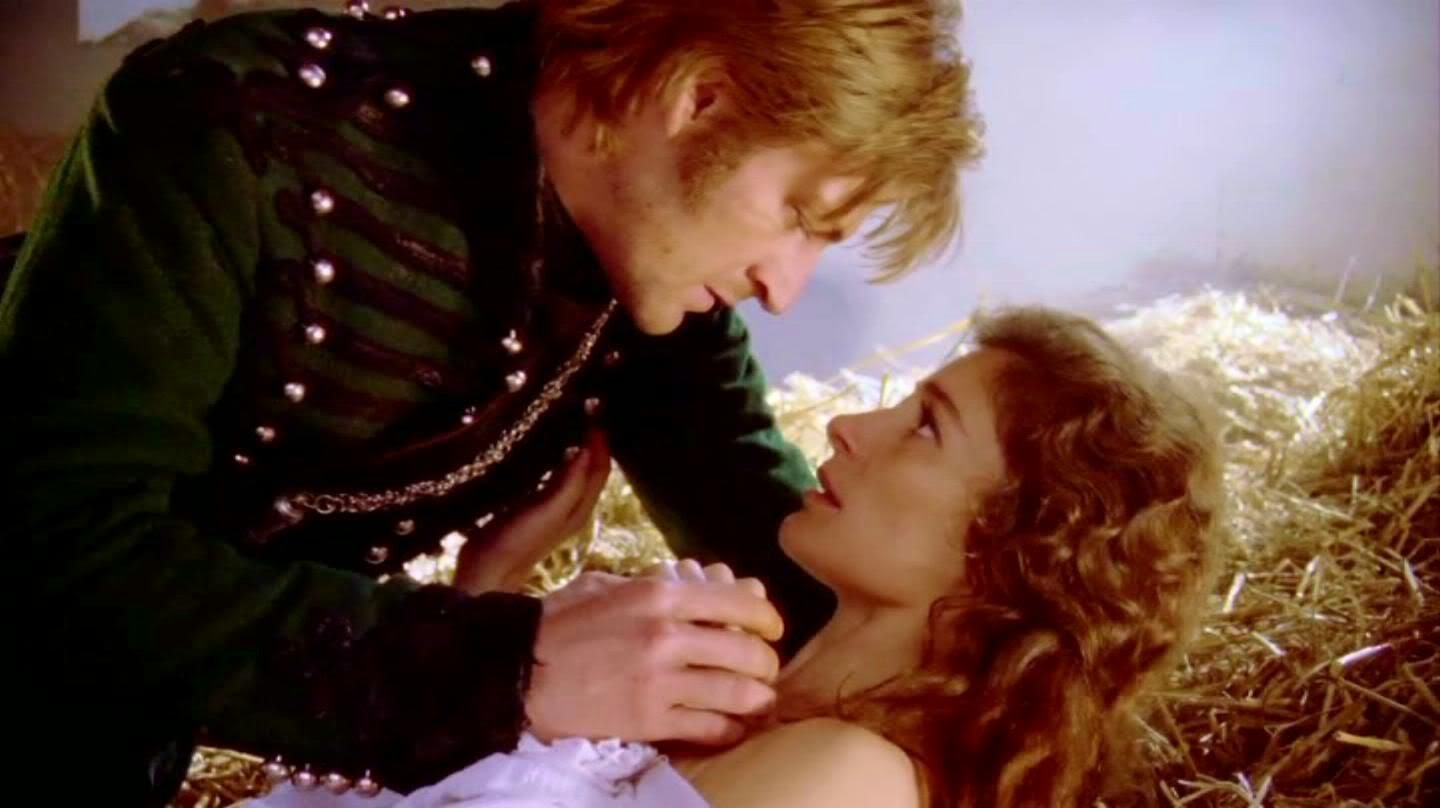 As a rule, women reading Sharpe aren't going to get much satisfaction out of his romantic entanglements anyway. Yes, most of his love interests are like-able enough, but they're not what you would call well rounded characters. And the man will seriously sleep with anything that moves: Snooty married duchess? Check. Ruthless Frenchman-murdering guerillo? No problem. Spanish double-agent for the French/ mistress of Sharpe's baby-murdering arch enemy? Who shows no particular interest in our hero but has slept with a man in every English regiment and keeps their jackets as proof of her conquests? Really Richard, where are your standards? Teresa is alright though. I approve of her.

As a TV adaptation, I felt that Sharpe's Rifles was a good effort. The casting was good, the battles scenes were executed well (on what couldn't have been much of a budget) and they got the look of it right. All I would say in criticism, is that it could be a bit pacier. When watched as a two-parter episode, as it would have been shown originally, Rifles works well - but watch all in one go as a film and it's all a bit plodding. The only Sharpe installment (that I have so-far seen) that I feel works as a stand alone film, would be Sharpe's Company. I also felt that Rifles was missing a really good villain, but I suppose you can't have a Sergeant Hakeswill in every episode...

The Book - Good light reading, if you can wade through the battle descriptions and cope with Sharpe's regression...

The Film - Would be worth watching for Sean Bean alone. Solid first installment to the series. Also the opening theme is hilarious for some reason - I think it's the electric guitar.